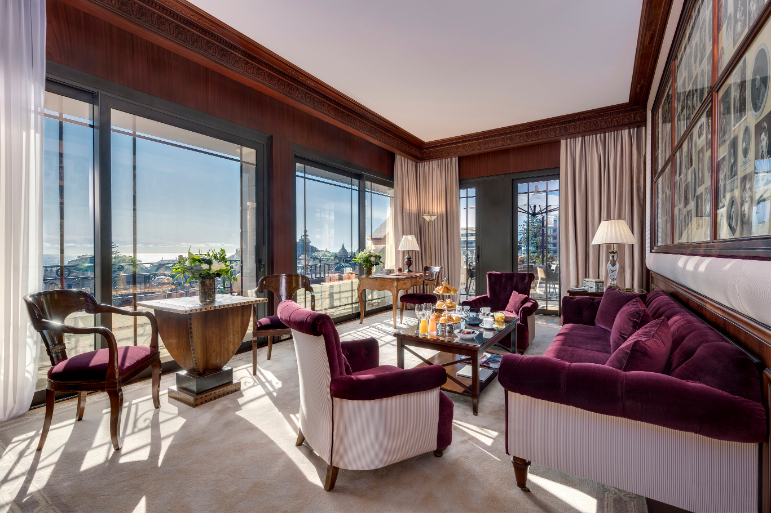 Ideally located in the Carré d’Or, a few steps from the famous Casino de Monte-Carlo, the Hotel Metropole Monte-Carlo overlooks the Mediterranean Sea. This luxurious Belle Époque style property was built in 1886 and entirely renovated by acclaimed French architect Jacques Garcia, who created a palace of 125 rooms and suites combining glamour and sophistication with Mediterranean charm.

The hotel and Suite Carré d’Or make an appearance in the latest series of The Syndicate on BBC One, offering a glamorous backdrop for a number of its brilliantly written episodes starring Neil Morrissey. The suite, which features a 110 square metre terrace with breath-taking views over Monte Carlo, was recently given a refresh by Jacques Garcia in collaboration with House of Pierre Frey. 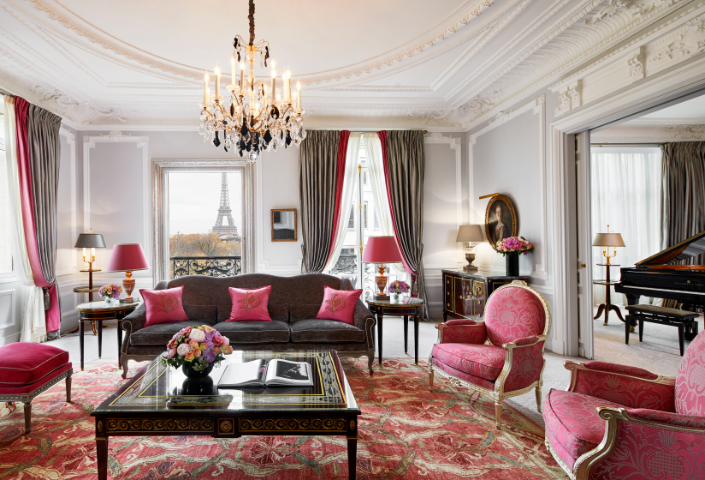 Emily in Paris & Sex and The City

Hôtel Plaza Athénée – the hotel that inspired Christian Dior – is located within Paris’ “golden triangle”, just a short walk from the banks of the Seine and the Eiffel Tower and epitomises Parisian glamour. It’s Haute Couture suite, with its stunning views of the Eiffel Tower, is one of the favourite suites amongst fashionistas, and is the suite of choice for movie star Brooklyn in the hilarious episode seven of Emily in Paris.

This isn’t the first time this suite has been on our screens – you may recognise it as the suite Carrie Bradshaw stayed in during her time in Paris in the last season of Sex and The City – and the hotel has also made appearances in The Devil Wears Prada and Something’s Gotta Give. 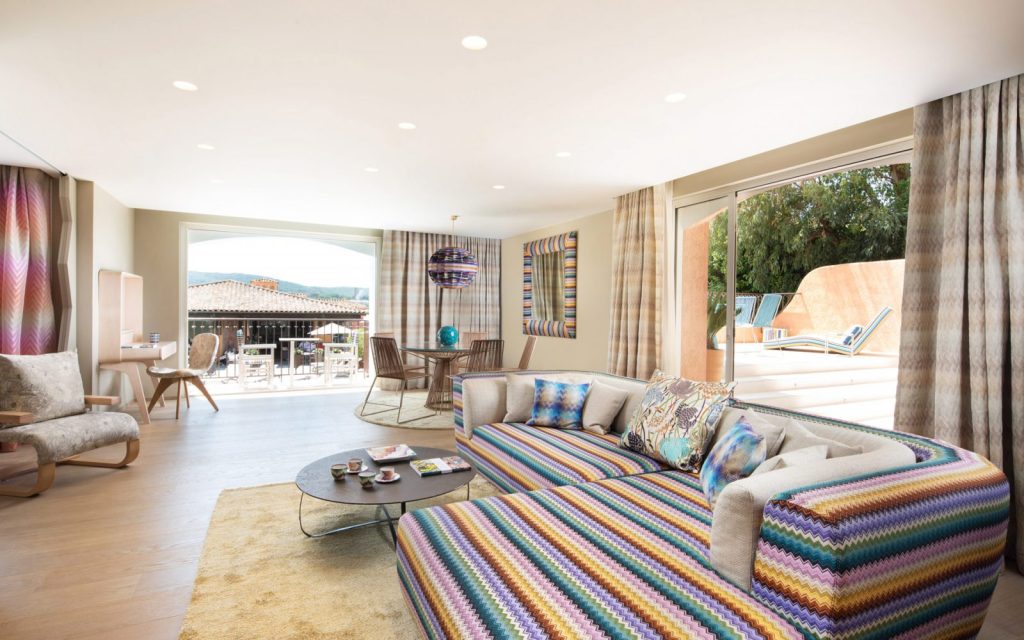 Riviera is a thrilling drama on Sky Atlantic, starring Julia Stiles, Poppy Delevingne, Jack Fox and Rupert Graves. Hotel Byblos has been at the heart of the French Riviera landscape for over 50 years. Originally built by Lebanese businessman Jean-Prosper Gay-Para, in an attempt to woo French actress Brigitte Bardot in 1967, the hotel was then sold to French businessman Sylvain Floirat, and is still run by that same family today (fourth generation).

The hotel and its presidential suite, The Missoni Suite, acts as a glamorous backdrop for a couple of Riviera’s episodes. The suite was unveiled in 2017 in celebration of the hotel’s 50th anniversary and is decorated with fabrics and furnishing from fashion house Missoni, with whom the hotel has an ongoing partnership.

The suite starts from €4,260 per night in low season, with a minimum three-night stay, and includes complementary airport transfer by limousine (or by helicopter when staying for 5 nights or more). 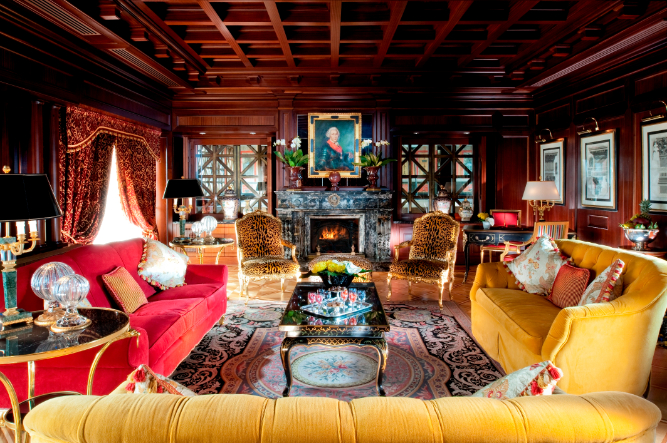 With its stunning frescos, and opulent Milanese glamour, Principe di Savoia’s Presidential Suite is one of Milan’s most fashionable suites. Sofia Coppola featured the hotel in many scenes in Somewhere, including the Presidential Suite with its impressive private swimming pool – the only suite in Milan with a private pool – which Steven Dorff jumps into with his daughter. Woody Allen also filmed his Wild Men’s Blue documentary in the Presidential Suite. Jennifer Aniston, Adam Sandler, and Luke Evans filmed several scenes at the hotel for the 2019 Netflix comedy film, Murder Mystery, which features Principe di Savoia’s magnificent façade and one of its Mosaic Rooms. 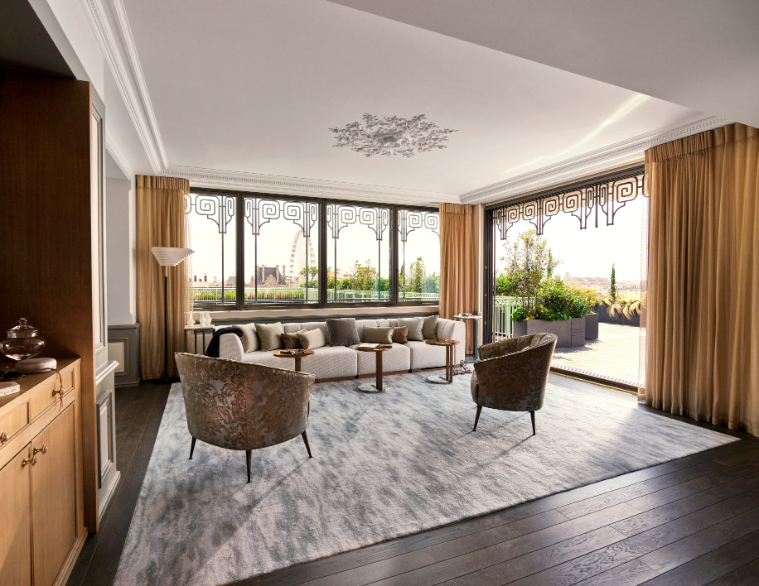 No stranger to the limelight, Le Meurice hosted filming for Woody Allen’s acclaimed romantic comedy Midnight in Paris, including a key wine tasting scene, which took place in the hotel’s Belle Etoile signature suite overlooking a 360 degree view across Paris. This breath-taking suite was renovated last year by designers Lally and Berger.

The new 2021 Netflix show Lupin also showcases the hotel, featuring the lobby and Presidential Apartment Tuileries Le Meurice, with the hotel’s own director of front of house, François Lenne, making a cameo appearance.

All imagery courtesy of the hotels featured. Leading image (The Missoni Suite) courtesy of Hotel Byblos.

Presidential Suite, Principe di Savoia – The only suite in Milan with a private pool