Before talking about Vichy Celestins Spa and Hotel, let’s talk about Casablanca! A city that calls to mind Humphrey Bogart and Ingrid Bergman, the Golden Age of cinema and upscale gambling dens. Culturally and geographically, Morocco’s largest city and home to the gargantuan Hassan II mosque. Not to mention it is the country’s chief port. It is a mad city… dirty, exciting and unpredictable.

So what Casablanca probably doesn’t make you think of is wellness and tranquility. A place where you can reset and recharge and ‘take the water’.

Taking the water – the old-fashioned tradition of immersing oneself in a ‘healing’ thermal spa – was historically the panacea to all manner of ailments, from gallbladders to indigestion. 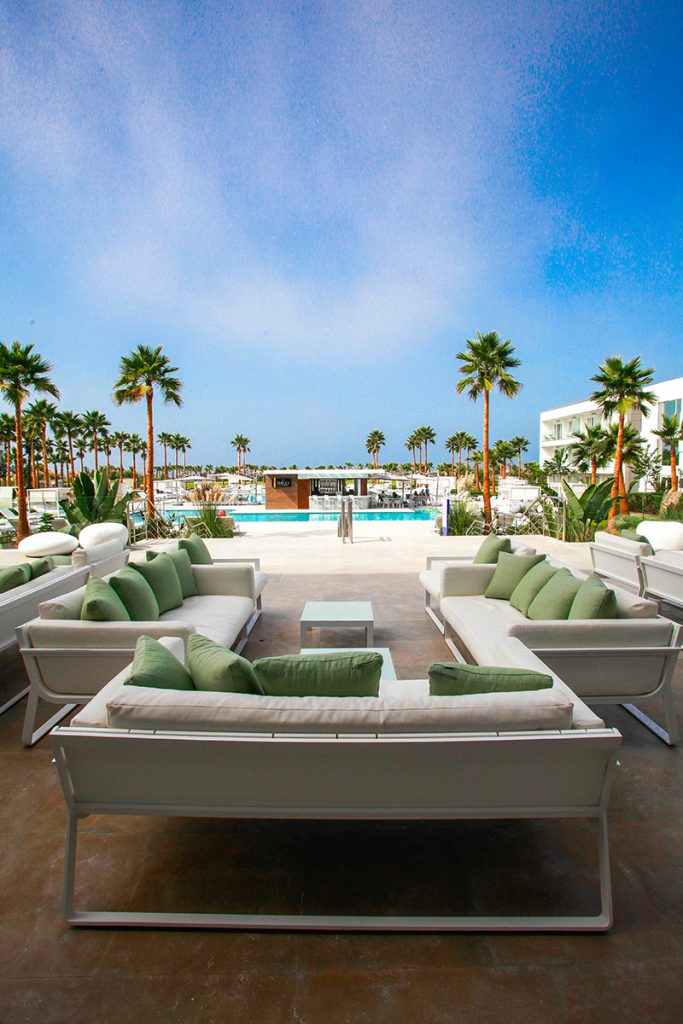 And one of the most famous of these places is of course the town of Vichy in France, on the banks of the Allier River.

Vichy is synonymous with spa-ing, healing water, floating around in a robe and premium skin care products. Calmness and clinical – the very opposite of Northern Africa.

But the Vichy brand has found a new home here. About 50km from Casablanca now lies a sprawling and lush space with the Vichy Celestins mega-spa and hotel at its centre.

It opened in late 2018 and is the supreme opposite of a typical Moorish style hotel. 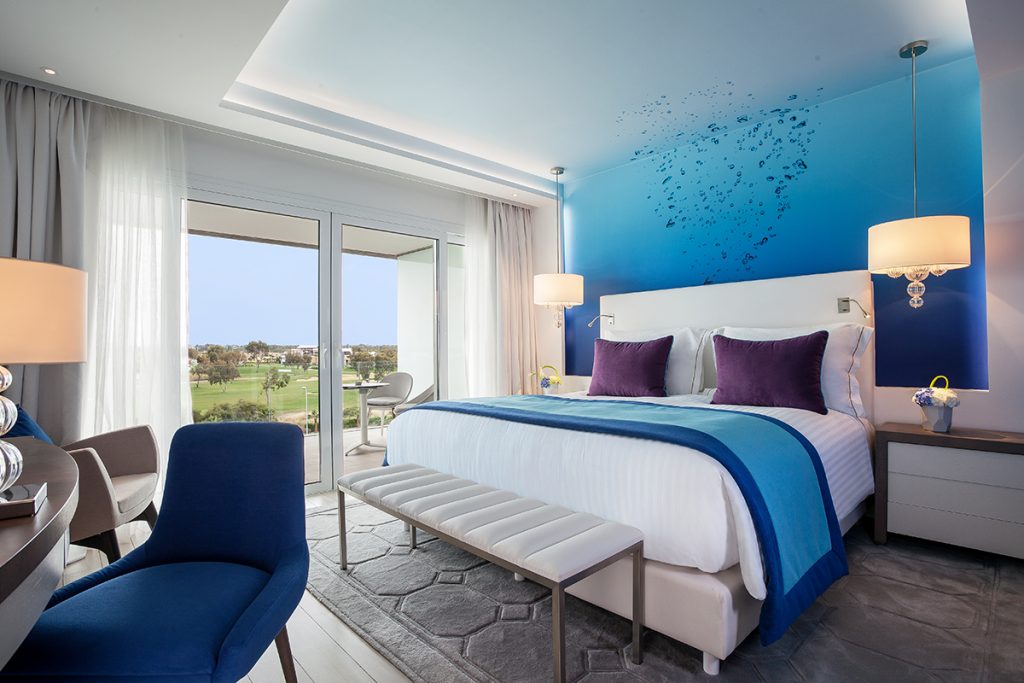 But don’t think the hotel is aimed purely at health-obsessed Europeans – the Moroccan royal family is also partial to a treatment or two and there’s a special private spa area that they often take advantage of. It’s very fancy.

After catching one of the last flights on a Friday to Casablanca from Gatwick in London, it was about an hour’s drive to the hotel. As we swept down the drive it felt like we were entering a swish country club. The golf green was immaculate, we passed a club house where we would lunch later in the trip, and everything was new and pristine. Visiting a hotel six months after launch is one of the best times as any teething problems have been ironed out and the staff are really getting into the swing of things but still excited.

Vichy Celestins was no exception. We were greeted with hot towels and a revitalising green juice shot and the manager Aurelie Denoueix, who had waited up for us, was dying to tell us all about her ‘baby’ and show us round. But ever in tune with her guests, and the fact we were tired, we just had a brief introduction before being shown to our rooms with the promise of tomorrow.

French designer Philippe Starck created the hotel’s interiors. Think acres of space, blocks of primary colors, statement sculptures and of course, the deep and soothing Vichy blue. My room was an oasis of loveliness with an enormous bed, platters of fruit and a superbly calm-inducing bathroom. There’s lots of twinkly mosaic and the shower even had various mood light settings – hours of basic fun.

The whole hotel smelled divine and the foyer deserves a big mention too. A huge Starck installation of turquoise, blue and white baubles suspends from the ceiling, emulating a Vichy waterfall – all quite breathtaking.

But the jewel in the crown is the spa building – at 3,200 square metres it’s the biggest spa on the entire African continent. It’s hushed and serene and you know that all manner of wellness magic is being performed behind the scenes. There’s a glorious saltwater indoor infinity pool complete with underwater relaxation beds and exercise bikes, and an enormous gym. The spa isn’t just for facials though, it also takes a medical approach to wellness and each therapist is vigorously trained by Vichy.

I experienced one of their house specialities, the Vichy Trilogy. It began with a 25-minute dip in a thermal bath with massaging jets and a bath bomb made from pebble salt and micro seaweed – so far, so relaxing. The next stage of the treatment was a mineral-heavy mud wrap made from salt, Vichy microalgae and mud from the Moroccan mountains. After it was generously slathered on I was wrapped in a heated blanket. The concoction also reacted with the heat for an intensely warm, toning and detoxifying effect. If you’re claustrophobic though perhaps this isn’t one for you – or ask the therapist to have the blanket on for just 10 minutes instead of 25. 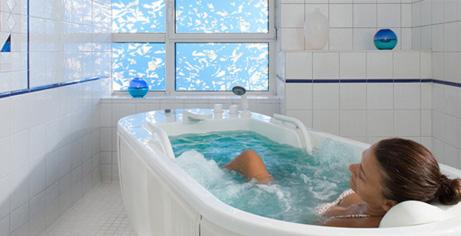 After washing the mud off it was time for the final step – the Vichy two-hand shower massage. I lay on a cool bed while jets of warm water pulsed all over my body and Vichy did its thing. I felt energised, deeply relaxed, cheerful…and just about ready for a Vichy water-infused cocktail!

The hotel also has a large outside area with a further two pools. Smiling waiters are on hand to deliver smoothies and all the beds and lounges are a blinding white. There’s a definite day beach party vibe to this but Vichy Celestins isn’t a rowdy place – guests are more likely to be found doing wheatgrass shots than tequila shots.

But that’s not to say you can’t enjoy yourself. There’s a beautiful international restaurant that hosts world-renowned guest chefs once a month. I was lucky enough to dine the evening Michelin-starred Joel Cesari was in house. He owns the splendid La Chaumiere restaurant in Dole, France, and the menu included dishes such as langoustine tartare and escargots with Parmesan emulsion. All paired with perfect wines.

There is also a dietetic restaurant where guests perhaps on a weight-loss programme or who are detoxing can enjoy food that’s just as tasty but prepared in lower temperatures, to reduce the amount of salt.

If golf is your thing, you’re just a hop away from the 18-hole course at the Bahia Beach and Golf Club. The clubhouse also has an airy restaurant and terrace where I enjoyed a fresh, Mediterranean-style lunch with ice-cold rose before jaunting into Casablanca itself.

After the serenity of the hotel, the city is a shock to the system. Bet everyone needs a break from relentless wellness, surely. The souks are big, but not intimidating and haggling is encouraged. No trip to Casablanca is complete without seeing the majestic mosque and you can spend a very pleasant hour or so wandering through the blue-painted lanes before having a strong Moroccan coffee in the Spanish Quarter. 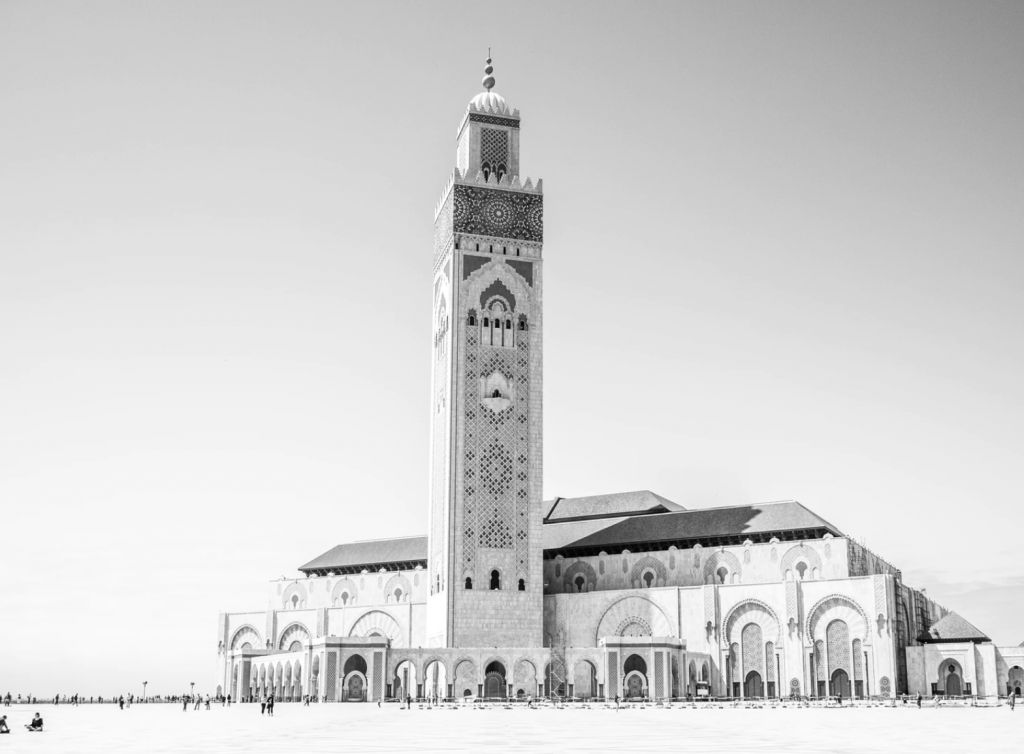 If eating locally, do try a pastilla – sweet pastry filled with melted cheese and chicken and cinnamon. Sounds odd – and it is – but good nonetheless.

There’s plenty to do in Casablanca, its an ancient place and the overlapping cultures and its chequered history make it rather thrilling. But heading back to the hotel was very welcome.

Whether you’re serious about furthering your wellness journey, need a break or just want to try something new, Vichy Celestins has you covered. What’s special about it, is that such a sea of ordered calm and discreet luxury can be found in such an unexpected quarter – in the magic and mystery of Morocco.

All other images courtesy of the hotel