After years spent honing his skills alongside chefs in Michelin-starred kitchens and most recently heading up the team at Ormer Mayfair, renowned chef Kerth Gumbs launched his first restaurant Boiler & Co near Tate Modern. The new restaurant-meets-bar is named after caramel-coloured beverages like beer, whiskey and coffee, that get their depth and body from the boilers they’re produced in.

As a nod to his home island of Anguilla, Gumbs creates dishes with emphasis on the best of British produce with a little Caribbean twist in a modern, industrial setting that reflects his offbeat personality. Alongside cocktails and inventive small plates, guests can also expect to try the famous crab Johnny cakes with scotch bonnet mayo and roe that made it to the finals of BBC’s Great British Menu 2020.

We caught up with Kerth to talk more about his new, exciting venture. 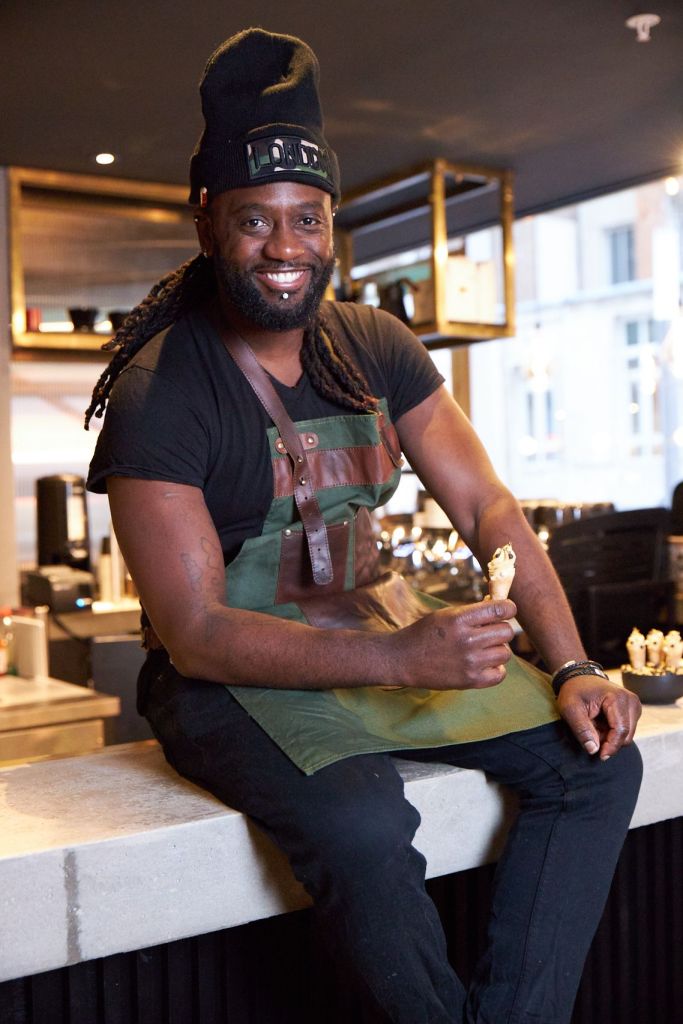 Kerth Gumbs: I grew up in Anguilla, a tiny Caribbean island whose economy relies almost exclusively on tourism. When I had to decide whether I wanted to do auto mechanics, woodwork or food in school, I went for food and nutrition. At the time I was working in a five star hotel on the island as a waiter, when I got a scholarship to pursue my passion in track and field. When the scholarship fell through and I had to look at other alternatives, I spoke to my father about pursuing a career in cooking and eventually flew to London in 2004 to study at Le Cordon Bleu.

After an intensive course, I graduated with a Grand Diplôme in French patisserie and cuisine. Then I got a job at the famous Quaglino’s brasserie, where I stayed for the next three years until head chef Julian O’Neill saw my potential and told me to get some experience in a Michelin-starred restaurant. He really saw my drive and passion, and encouraged me to work at a Michelin star level, so naturally I took his advice. After some interviews, I entered the culinary world by successfully applying to Tom Aiken’s eponymous flagship, and for the next 6-7 years I worked in many Michelin star kitchens alongside famed chefs, honing my skills, learning new techniques and building on my passion. 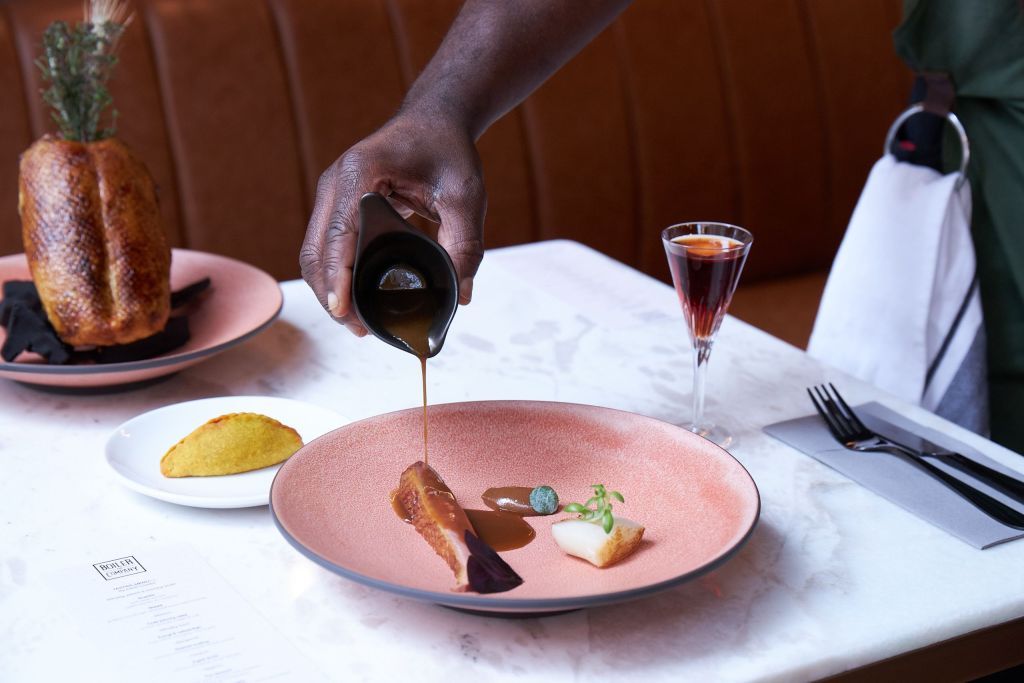 At one point, I decided to leave the UK to spend three years working in Singapore in Jason Atherton’s restaurant Esquina. I wanted to leave London and make myself an asset to myself by getting some international experience. After returning from Singapore with a lot of new ideas and skills, I was hungry to do something a bit more culinary challenging, which led me to my most recent venture – being a head chef at Ormer Mayfair, leading a team and inspiring them to try and capture a star in the most challenging environment. I took a big bite of that opportunity and it was very challenging, but it led me to where I am now.

Why did you decide to leave Ormer?

Kerth Gumbs: I wanted to find an establishment where I can cook food that reflects my personality. I take my tool and my craft very seriously but personality-wise I am a very laid-back person. I wanted to develop an atmosphere where everyone is happy and more relaxed. Growing up in the Michelin world, my alarm would often go up at 6 in the morning and it made me feel like I wanted to cry just before going to work. I don’t want people to be feeling that way. Just like in life, there will always be good and bad days, but you want people to feel happy and relaxed about coming to work and also about making mistakes. 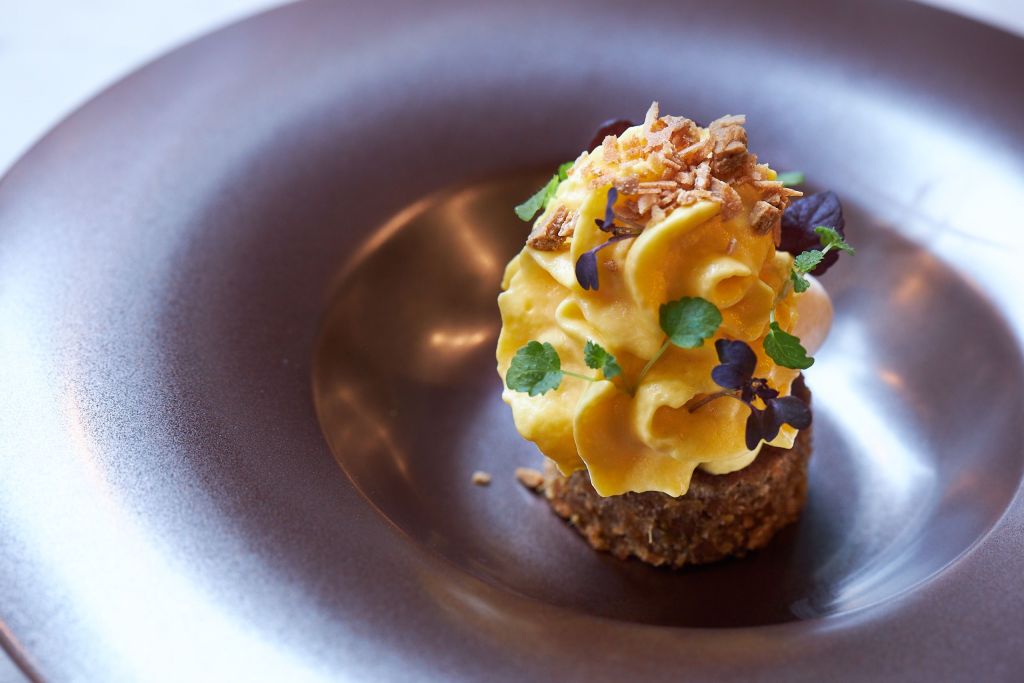 How did Boiler & Co come to life?

Kerth Gumbs: I wasn’t actively looking for anything new because I knew my next venture really needed to reflect my personality. This is when the founders of Boiler & Co, Adam Carr and Cesar Breton found me on LinkedIn. When they first approached me with their concept, it was very much centred around the drinks, with food only being the backburner. I was honest and upfront and said that it doesn’t make sense to engage me without putting an equal emphasis on the food. I’m from the Caribbean so I naturally love cocktails, music and dancing, and Boiler & Co really fits into that. Adam and Cesar’s idea was to do entertainment on the weekends and pairing cocktails with the tasting menu so they understood that I will complement the brand and we will work in synergy and be respectful of each other.

Adam is also very positive and puts a lot of emphasis on sustainability and ethical ways of working. For me, that was always something important because I believe in development and building up a strong team. 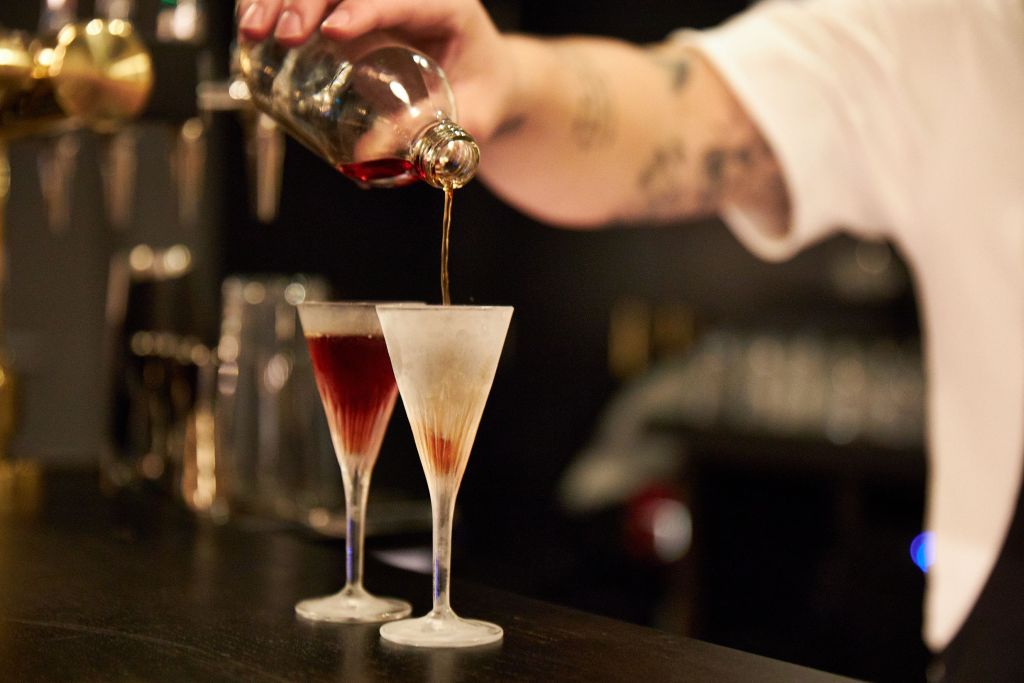 What is your mission at Boiler & Co?

Kerth Gumbs: I would love to someday obtain a Michelin star, however it’s not my main focus. We want to make food that we love and make other people happy, not only customers but also those working in the establishment. We are all fighting for the same mission of ethical and equal ways of working.

What did you do in the period in between?

Kerth Gumbs: Seven or so months before I started to engage with the Boiler & Co brand I did a lot of different things. I did pop-ups for Soho House, three weeks in the Caribbean for the Four Seasons brand, culinary classes and other exciting little projects.

What can guests expect in terms of the menu?

Kerth Gumbs: I’m going to be using my creativity while utilising the best of British produce and elevating that with a bit of my culture and heritage. The concept is very much restaurant-meets-bar, hence why we have the cocktails pairing with the tasting menu. When we’re fully up and running, we’ll be launching breakfast, lunch and ala-carte menu as well, while on Mondays and Tuesdays we will do breakfast and brunch only. To summarise that, the food at Boiler & Co is about putting emphasis on British-led products with a little twist. Hopefully as we continue I can weave in more Caribbean-inspired elements into the dishes. 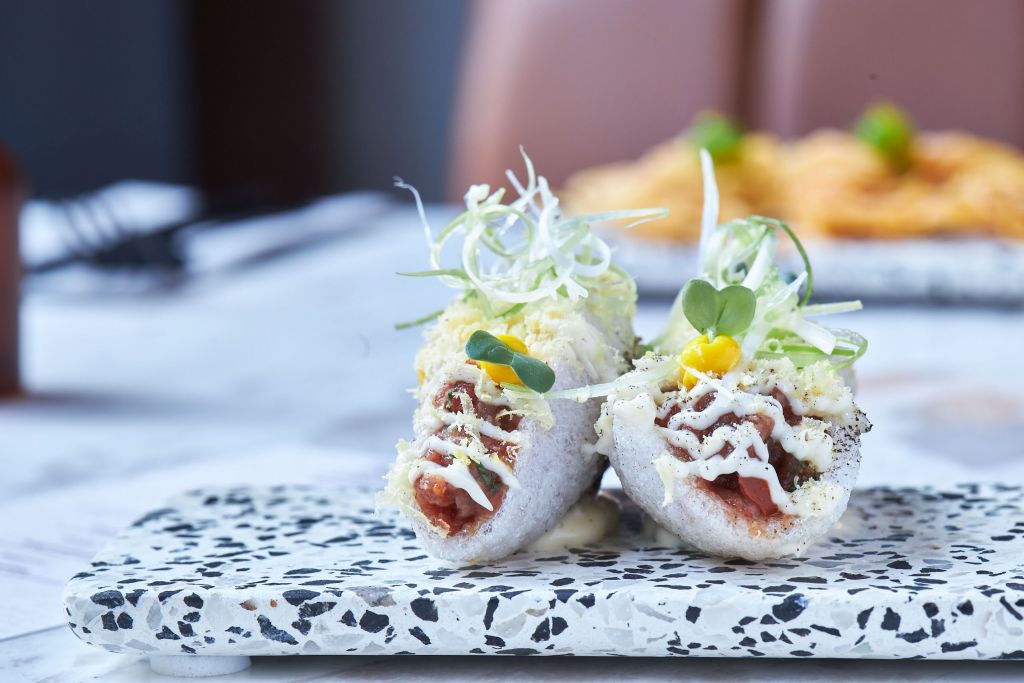 Can you give us some examples of signature dishes that fuse British and Caribbean influences?

Kerth Gumbs: The aged duck with tamarind which is a commonly used ingredient in the Caribbean and turnips which are more on the British side. I can’t wait to develop more dishes and flavours like this as we go along.

What dish on the new menu are you most excited about?

Kerth Gumbs: I actually have two! One would have to be the scallops dish as they’re my favourite shellfish to cook. I have intense memories from my early years of cooking scallops which keep me on my toes when I’m preparing and serving.

The second would be my Ducanna Cake dessert as it’s quite a unique interpretation of a childhood memory I have of eating ducanna or conkie dumpling, which is where my original inspiration for the dish came from.

What about the interiors?

Kerth Gumbs: In one sentence – Industrial with a twist. You can expect a lot of black, brass and copper with a little bit of white. The bar will be colourful to reflect the Caribbean vibe and there will be a separate cocktail room upstairs. The downstairs dining area is an open-plan, free-floor environment with a chef’s table so that the guests can see how their food is prepared. 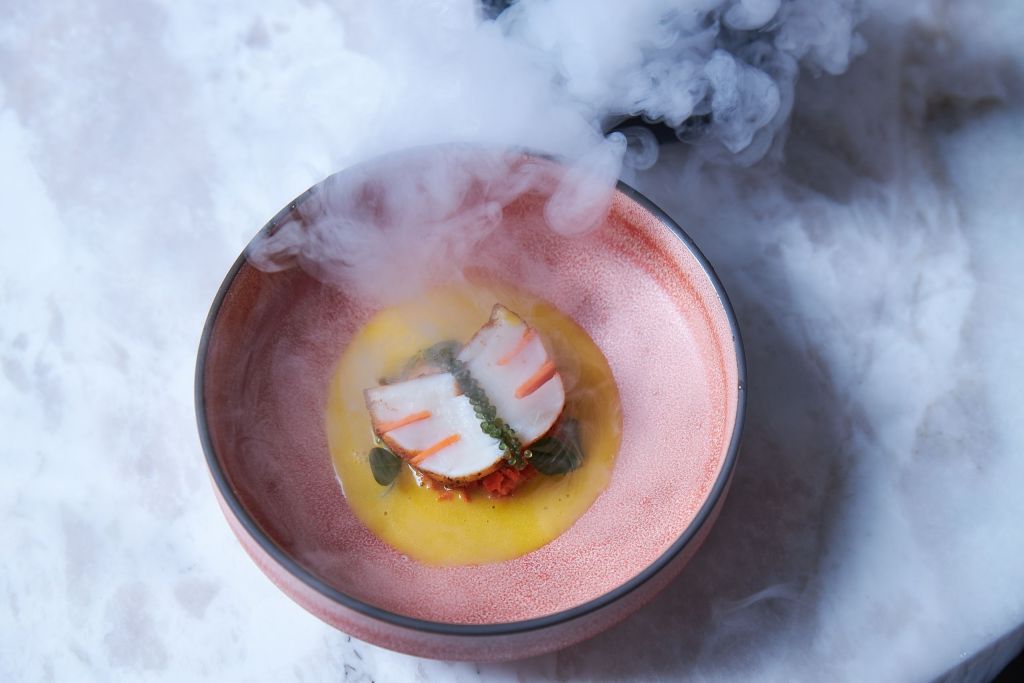 How often do you go back home to the Caribbean?

Kerth Gumbs: Normally once a year I go to the Festival Del Mar, which is an event where we celebrate everything about seafood. I did a pop up there before and a tasting menu for Four Seasons Resort and Residences Anguilla which was very popular among tourists and locals alike.

Do you still cook at home?

Kerth Gumbs: Yes, I have five kids so I’m always making something, especially on Sundays and special occasions, as well as the baby food. My oldest son is 13 and is very helpful and always involved in making curries with me. Most of the time during the week I don’t have time to eat anything as I get home late, plus I’m always tasting something in the kitchen so I hardly feel hungry when I’m working.

Three of your favourite restaurants in London?

Kerth Gumbs: I don’t have a list right now as it always changes. I often write down the restaurants I want to visit that seem interesting and exciting and put emphasis on visiting one every eight weeks or so.  Two restaurants on my list to visit in London right now are Ikoyi, which recently won its second star and Mãos, which has retained its one star. 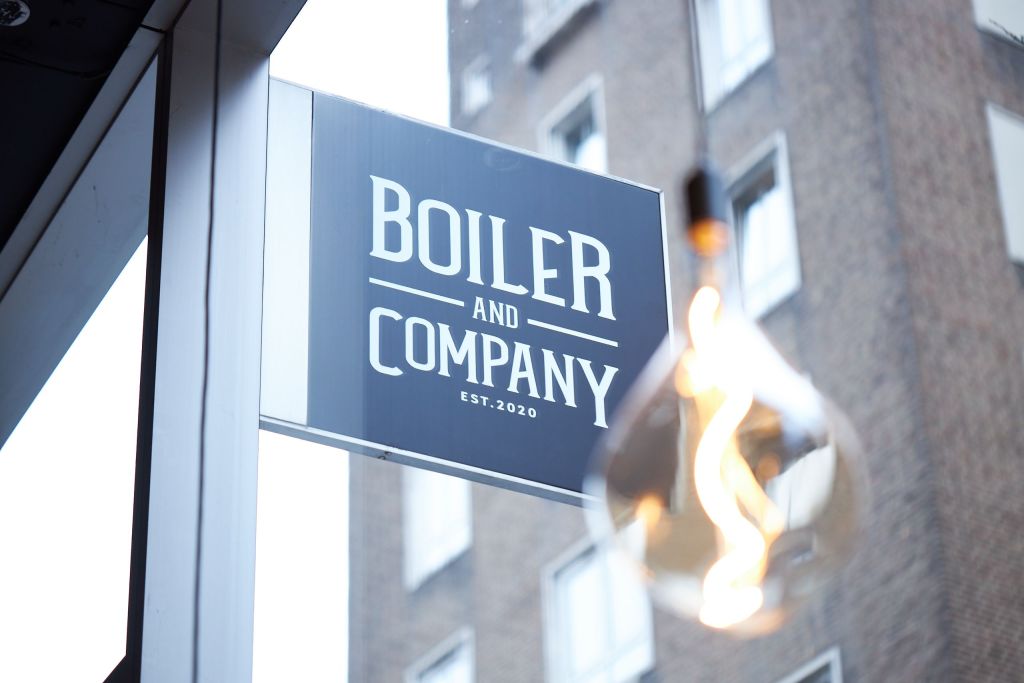 If you had to choose one dish to eat for the rest of your life, what would it be?

Any advice for young chefs who dream about having their own restaurant one day?

Kerth Gumbs: I always encourage younger chefs to not be shy and don’t wait around for someone to show you everything. Look over people’s shoulders to observe and learn as much as you can. Even at Boiler & Co, I’m looking over Adam and Cesar’s shoulders to see what and how they’re doing what they do, whether it’s paperwork or logistics. These things don’t come naturally to me as my forte but I try not to shy away because in the next situation, these skills might be useful.

You’re very occupied with the opening of Boiler & Co, but do you have any other big plans for the near future?

Kerth Gumbs: My current mission is to stabilise Boiler & Co and my second more long-term goal would be to try and evolve myself so that I can do more restaurants in the future, hopefully even in the Caribbean and internationally.

All imagery courtesy of Boiler & Co.