Beauty and the Beast the Musical at the London Palladium

As a nineties baby, the Disney adaptation of Beauty and The Beast is a both a familiar and terrifying concept. The live-action remake has now laid claim to most personal childhood favourites, often spinning computer-generated nightmare fuel from even the most beloved characters. The tale as old as time has had a facelift at the London Palladium.

Needless to say, when Disney’s ‘Beauty and the Beast the Musical’ returned from its 20-year hiatus, I approached this production with some trepidation. I needn’t have worried. Thomas Schumacher’s glittering musical retains all the levity of the original animation, adding a touch of modern theatrical flair to the much-loved classic. 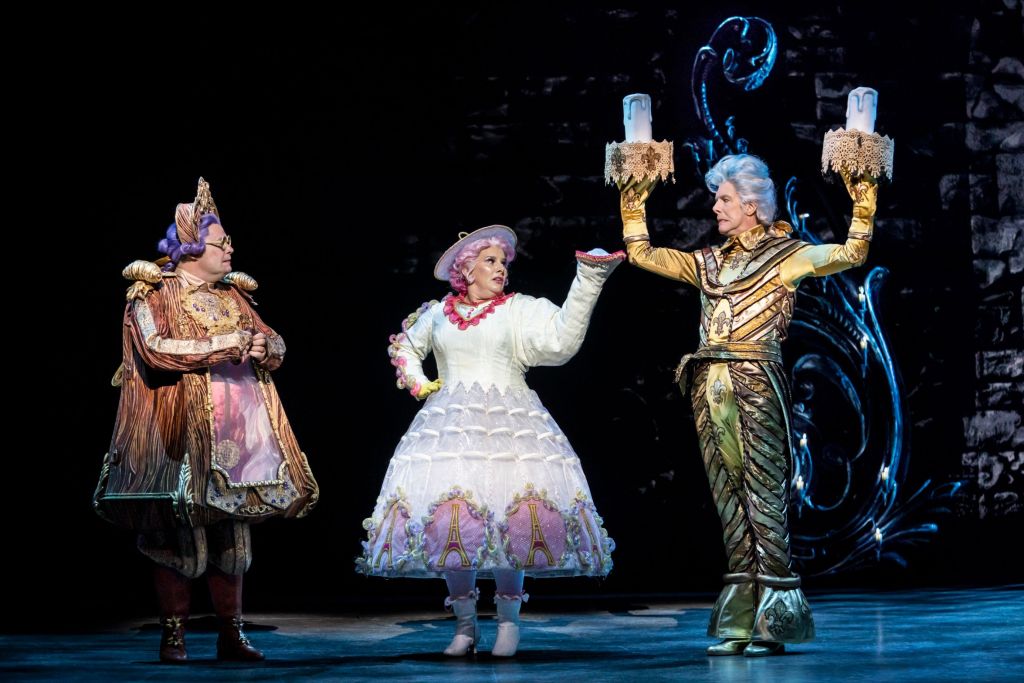 It’s clear from the outset that the musical will cleave closely to the 90s animation, as the London Palladium fills with the maternal tones of Dame Angela Lansbury, the original ‘Mrs Potts.’ Disney purists will be pleased to find Alan Menken and Howard Ashman’s sublime movie score is left virtually untouched, while Director Matt West returns to the creative team alongside Stanley A. Meyer and Ann Hould-Ward from the original Broadway run.

Of course, there are changes – Courtney Stapleton’s bespectacled Belle is rebellious and headstrong, while Gaston (Tom Senior) is more explicit in his reproductive aspirations (Belle’s children are to be “stuffed with every Gaston gene”). The eagerly anticipated hit song, “Be Our Guest,” virtually takes on a life of its own, transforming into a resplendent Vegas-style show packed with can-can-girls, tap dancing and cartwheeling candlesticks galore. Brilliant.

The performance is carried by the castle’s metamorphosed staff, who make a convincing silver lining to the hostage situation. Gavin Lee is the crowd favourite as the periwinkle-blonde ‘Lumiere’, his camp optimism so endearing that the first hint of his big number prompts spontaneous applause. Unlike its live-action forerunner, the musical’s characters are more obviously human than silverware, but therein lies their charm. Lumiere’s candlewicks reignite on cue, while Chip the tea cup (Rojae Simpson) befuddles as an adorable floating head. Great embellished scrolls swirl seamlessly on and offstage to delineate castle walls, while a gauze and LED wall conjure ominous moments through perspective shifts and animation.

Shaq Taylor’s Beast is woefully underused in the first act, armed only with a handful of lines and an overly child-friendly roar. He comes into his own with a powerful rendition of “If I can’t Love Her” ahead of the interval, but it’s his goofiness which sells the romance. Sweet moments are provided by his over-investment in the story of Excalibur, while the audience revels in attempts to conceal a snort-laugh from Belle.

Beauty and the Beast the Musical will not be novel for those familiar with the film, but it’s a thoroughly entertaining performance that undoubtedly does justice to the original. “A tale as old as time,” rather than “a whole new world,” but charming, heartfelt and mercifully devoid of CGI.

Beauty and The Beast runs at The London Palladium until Saturday 17 September 2022.