A trip down memory lane: Dinner at the new Chotto Matte Marylebone

Excitement preceded my visit to the new Chotto Matte in the heart of Marylebone, just off its stylish yet elegant high street. Partly because Marylebone has the perfect balance of energy and classy dining destinations, but mainly because its iconic fusion of Peruvian and Japanese flavours always hits the spot.

I remember Chotto Matte’s flagship restaurant opening in bustling Soho in 2013 and being mesmerized by the loud, upbeat nightclub vibes and delicious plates served under moody spotlighting. It was the time of my ‘hungry-caterpillar’ exploration mindset, discovering every cool new opening and increasingly dipping my toe into London’s fine (Michelin-starred) dining scene.

Nearly ten years later, I appreciate the casual approach to dining whilst maintaining the highest possible food quality standards. Music, atmosphere and interior design are slightly paired back, keeping the focus on what’s in front of me and who I have beside me for conversation. Looks like Chotto’s new venture achieves the fine balance of adapting its original concept and nestling well into the new neighbourhood. 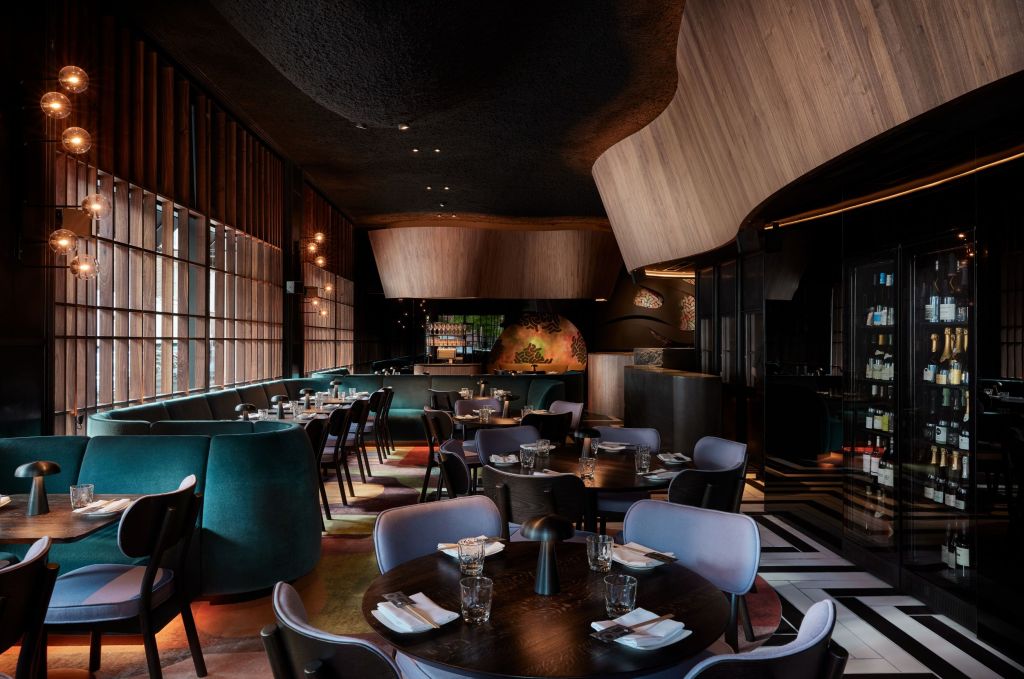 We are led to our table right in the middle of the airy and open-spaced restaurant with a full window front in our backs and views of the bar and the counter (without the distraction of an open kitchen, which, bless any of my dinner companions, means I am only 50% aware of our conversation and usually completely distracted.)

There is an unexpectedly diverse mix of guests sprawled across the booked-out tables: from couples on dates, girlfriends, groups of couples to whole families celebrating birthdays, business dinners and fashionably mature local ladies, it feels slightly more diverse and demurer than its Soho counterpart. Most importantly, the music is as good and energetic as in Soho, but more subtle, providing the right background to allow for audible conversation. So much so, that conversation and recommendations spread to our fashionable neighbours, and we basically curated their dinner for them. 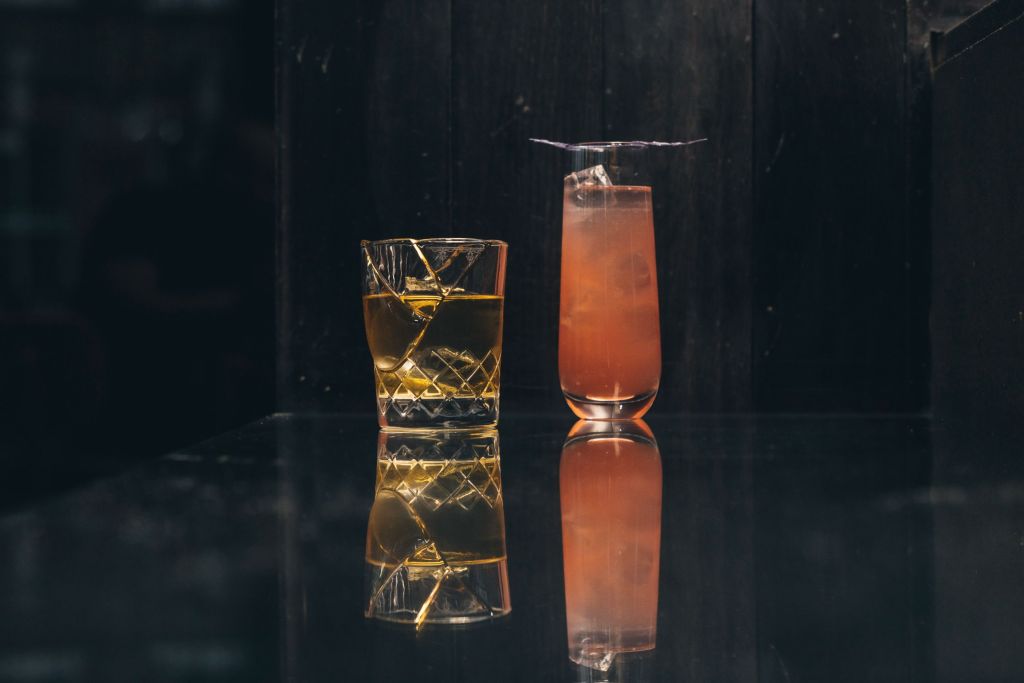 We are warmly welcomed and refreshed by two new gin-based cocktails on the menu: The Story of Jade (fresh, floral and bursting of lime aromas) and Wabi-Sabi (nutty, earthy, savoury with saffron-resembling Japanese shredded red pepper – giving my drink a little Alien-esque appearance). Had we been less sensible and explored the menu further, we would have recognised some classic Chotto cocktails with newly added creations fusing lesser-known Japanese and Peruvian spices, fruits and flavours. 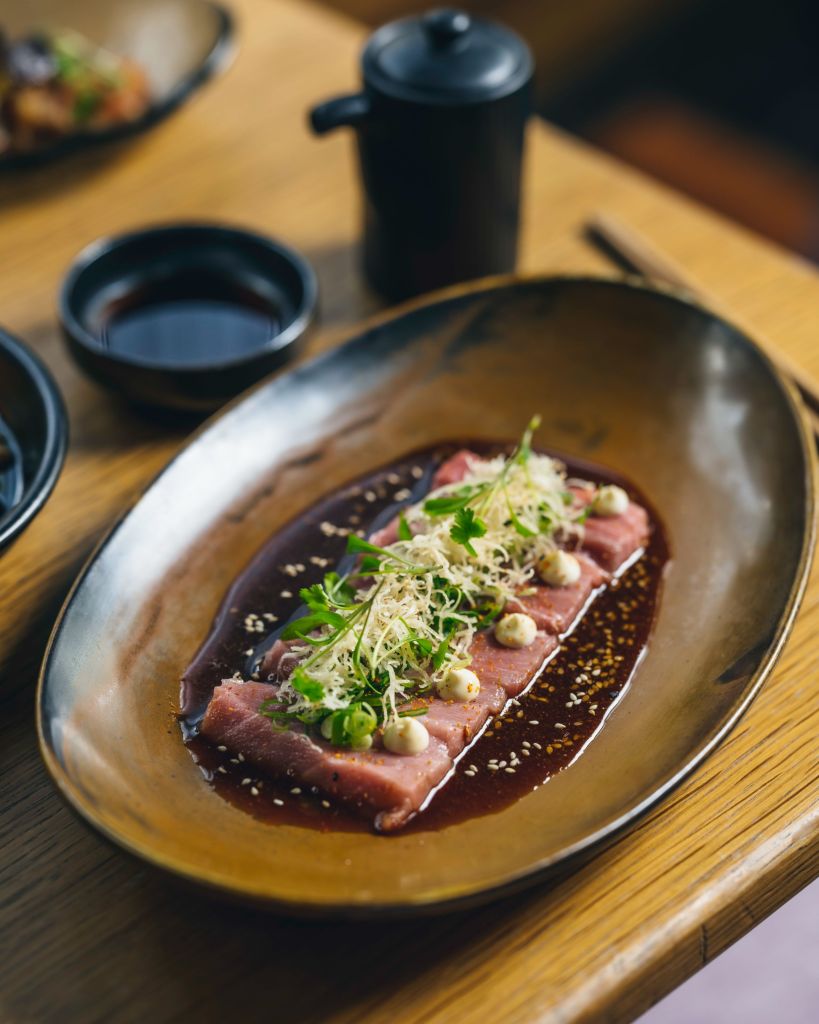 We try highlights and new dishes from nearly every menu section: sashimi, tempura, hot dishes and from the robata grill. As soon as the food arrives, we concur: Begonya Sanchez, the kick-ass female head chef who takes her inspiration and admiration from the Adria brothers, keeps Soho’s favourite and most popular dishes on the menu, whilst adding newness and finesse to them. The tuna tataki is raw on one side and slightly seared on the other, skilfully combined with red jalapeno herb salsa.

Nikkei Jalea Mixta (juicy seasoned prawn tempura) is blackened by squid ink and albeit simple, a must-have. Octopus tentacles arrive grilled and served with a fresh and zesty spicy yuzu sauce, its freshness finely balancing the smokiness, and the plate artfully decorated with little blobs of purple potato puree. By the time our black cod marinated in chili miso arrives – the highlight of the evening – it’s sealed; Chotto’s new opening does not disappoint, rather it seems to have matured; keeping its best dishes and improving them. 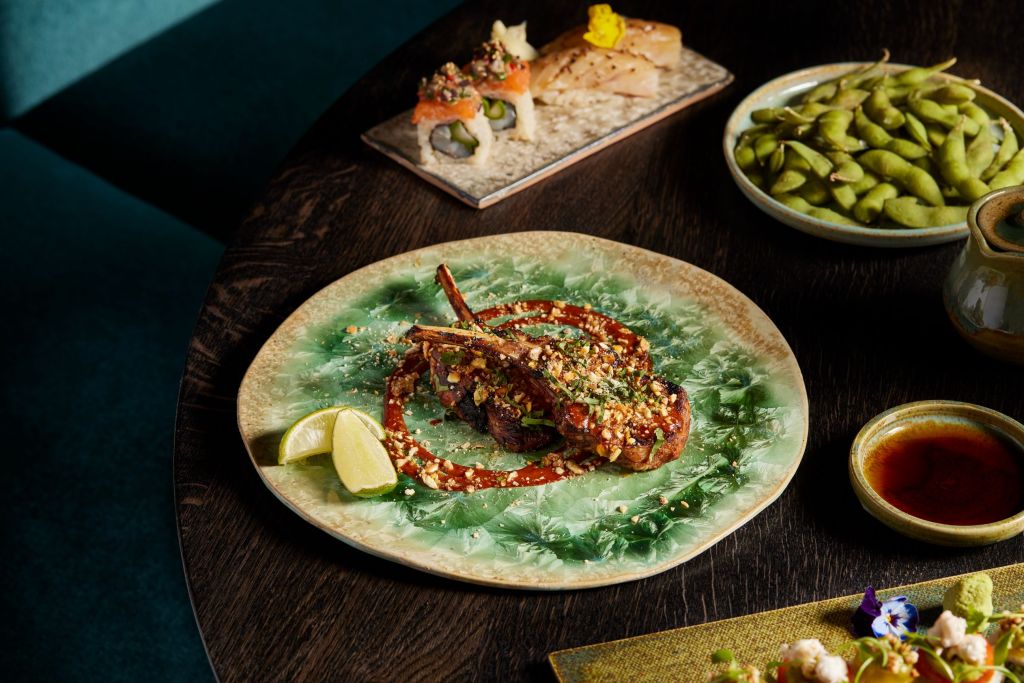 We continue with smoked lamb chop from the grill flavoured with coriander and Peruvian chili miso and miso-marinated chicken with pickled carrot, which is a little more mellow finale to our exploration of Chotto’s Nikkei classics and new dishes. Despite plenty of food for two, one simply cannot depart without at least glancing at the dessert menu. I am in luck, the Magical Chocolate Ball has also made it onto the menu, but I have only eyes for the dulce de leche soaked treacle cake at the bottom of the plate. Some molten chocolate and black sesame ice cream later, we can happily conclude our meal.

A winning food concept in one of London’s nicest neighbourhoods, providing reassurance of the original (if you have been to Soho) and enough newness to excite. Looks like Chotto Matte, like me, has grown up. Here is to the next ten years.

All imagery courtesy of Chotto Matte.