A Fairy Tale dinner at The Princess of Shoreditch

A Shoreditch linchpin for over 250-years, The Princess of Shoreditch has had a gastronomical glow-up – this E1 stalwart now burnished with the arrival of ex-Pamona chef, Ruth Hansom is cooking smart, interesting and beautiful plates of food alongside a fantastic selection of wines. 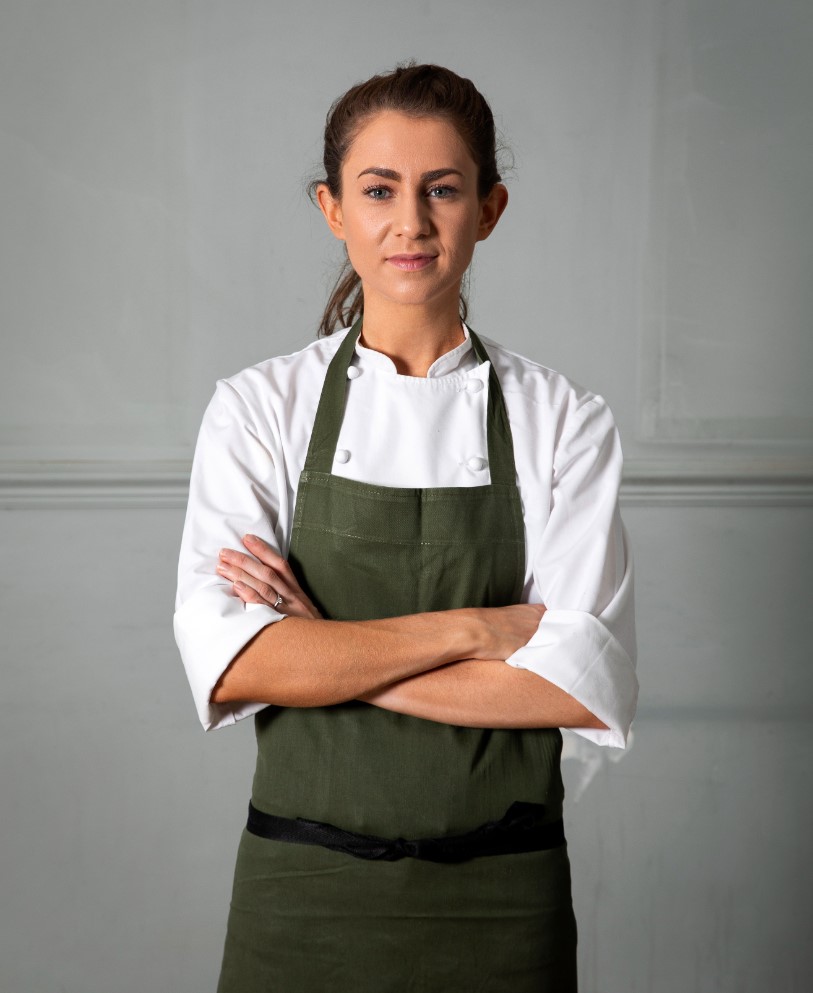 At the age of just 25 – Hansom has flourished into a confident and exciting young chef, whose 2020 culminated in reaching the finals of the Great British Menu. Prior to that, Hansom was head chef at the Luton Hoo hotel in Bedfordshire; and before that spent five years at The Ritz London, during which she found time to compete and win, Young National Chef of the Year. 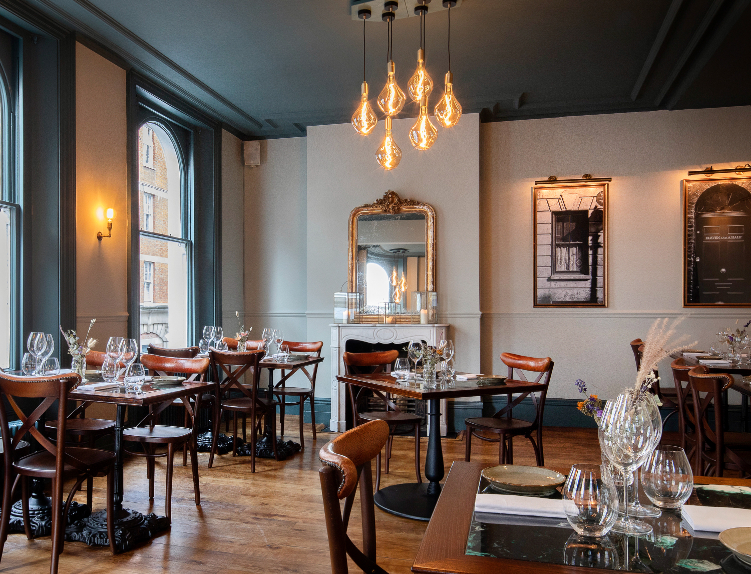 The Princess of Shoreditch is split over two-floors, downstairs on the ground floor you will find a more casual dining setting, whereas upstairs, an intimate the 30-cover dining room showcases Hansom’s modern British cooking, with the seasonal menu championing British ingredients that are locally sourced and ethically produced.

We arrive as London was wilting in the African plume that had swept across the capital leaving its occupants hastily piling into any boozer they could to quench their thirst. Upstairs there is a choice of two menus, a five-course or eight-course tasting menu. We were quickly greeted by our exceptional host who quickly pointed out that the menu is a celebration of British produce, with provenance lying at the heart of Ruth’s food – this much was clear with the arrival of our first dish.

We started on our tour of the UK in Hampshire – as two glasses of Coates & Seely Britagne Brut Reserve arrived at our table, quickly followed by a potato and rosemary sourdough and the most unctuous caramelised onion brioche (it was to die for). As well as Hampshire our taste bud quickly travelled across the Solent to the Isle of Wight. Our waiter informs us that Hansom has a monthly-rotating, vegetable flavoured butter, the current incarnation being from the tomato. Shaped like a bull’s heart, this butter brought the most unbelievable flavours of tomato – made using the waste Isle of Wight tomato trimmings. A velvety smooth, marmite was everything a marmite loving fan could ask for, especially when slathered over a tasty onion brioche. 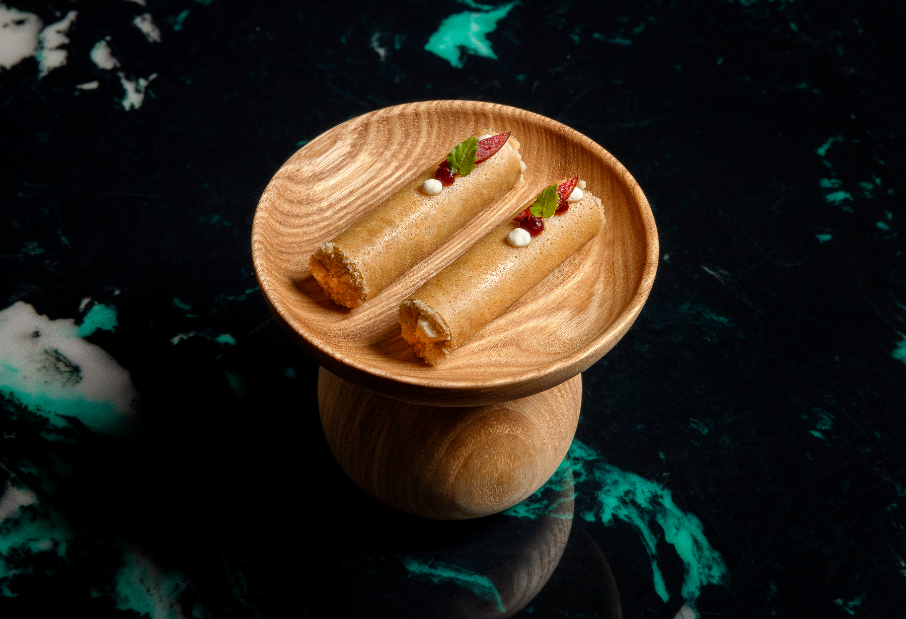 Snacks of sea trout, fennel, nori and chicken liver, yoghurt, pistachio, raisin arrived, both delightful – the sea trout was fresh and delicate and the chicken liver, was wonderfully balanced between sweet and creamy. An enigmatic ‘British Corn’ followed, promising – a reimagination of barbecued corn, made from charred kernels and beurre noisette, served with charcoal and hazelnut praline, pickled mushrooms and nectarine. The praline for sure took some getting used to, however everything sang harmoniously together on the plate. 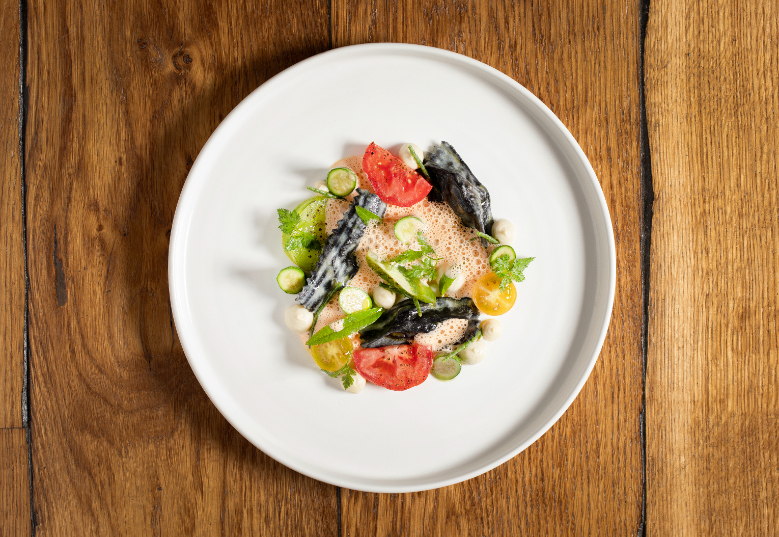 Red mullet ceviche Isle of Wight tomato, Yorkshire fettle, olive, fennel was wonderfully fresh and was the first-time my guest and I had tried Yorkshire’s answer to the traditional Mediterranean style salad cheese. There are many pairings that excite your palette and cheese, and onion is most definitely one of them. Cheese and onion arrived at the table as Berkswell and truffle agnolotti, spring onion, kohlrabi and bacon foam. An incredibly moreish dish, the bacon foam was a nostalgic trip back to munching packets of Frazzles as a kid, delicious. 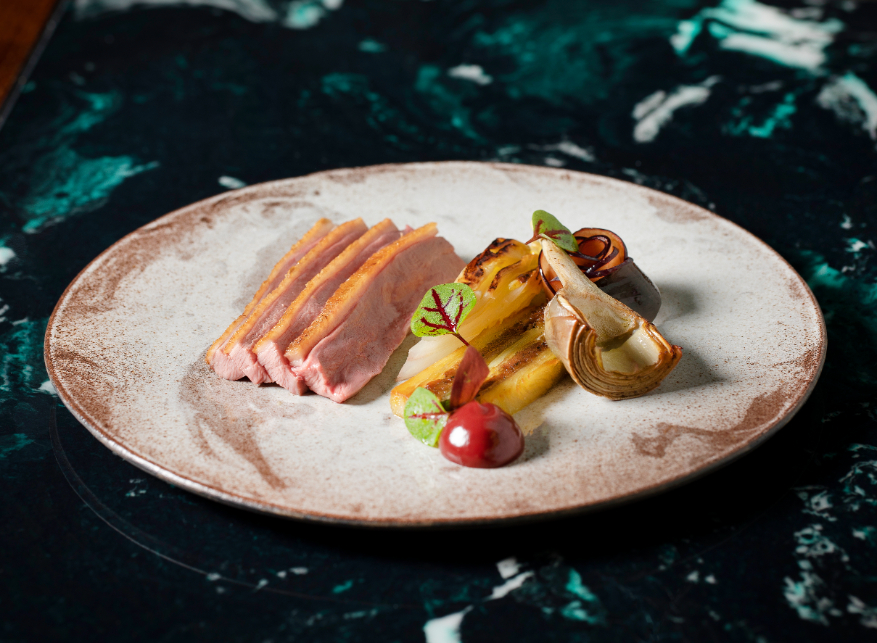 Our last savoury dish of salt aged duck with artichoke, chicory, cherry, potato & duck leg terrine really showcased Hansom’s classic French training, the duck was cooked to perfection, I only wish that the skin had been crispier. Nevertheless, wonderfully sweet cherry balanced alongside bitter chicory and gamey duck, hats off to the chef. A short interval between courses ushered in a delightful palate cleanser of; gin & tonic, elderflower, cucumber, and dill which refreshed our palates and left us with an appetite for pudding.

Before a parade of puddings arrived, we welcomed a plate of English strawberry, goats’ curd, Coates & Seely sparkling, and basil. This dish was celebrating the best of British seasonal flavours, which complemented each other harmoniously. A picture on the plate a delight on the palate. 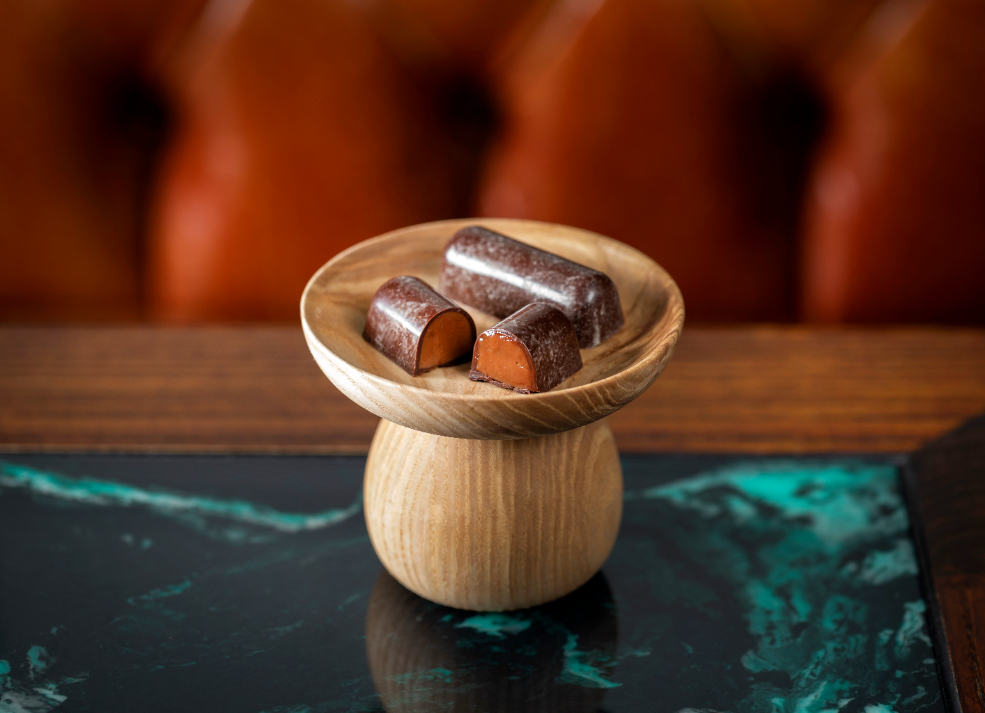 As we finished off our English bubbles, we enjoyed Petit Fours including a cashew and miso choux bun with a hand tempered princess chocolate and raspberry vinegar. Having found myself lost in a choux bun and reaching for the final hoop in my belt buckle, my guest and I were left full and content after an evening of incredible food, that left this gourmand with a penchant for more.

There’s been a pub on this corner since 1742 but we left doubtful that The Princess of Shoreditch has ever been as busy or as charming as it is today with Ruth Hansom at the helm – the jewel in the princess’s crown.

All imagery courtesy of The Princess of Shoreditch

A post shared by The Princess Of Shoreditch (@princessofshoreditch)