Ritu by Anubhav Srivastava: The Six SEASONS why you should eat here

The six seasons of India, or Ritu in Sanskrit, are the inspiration behind Ritu by Anubhav Srivastava, a fine dining Indian restaurant in St John’s Wood. The concept at Ritu is a menu that reflects the changing seasons and the variety of fresh fruit and vegetables it yields.

The Summer 2022 heatwave in London was unprecedented. The sale of fans and air conditioning units have soared in attempts to cool oneself off,  but did you know that eating curry in hot weather can achieve a similar effect? The turmeric present in spicy dishes consists of curcumin which helps to improve blood circulation ultimately leading to lowering the body’s temperature. 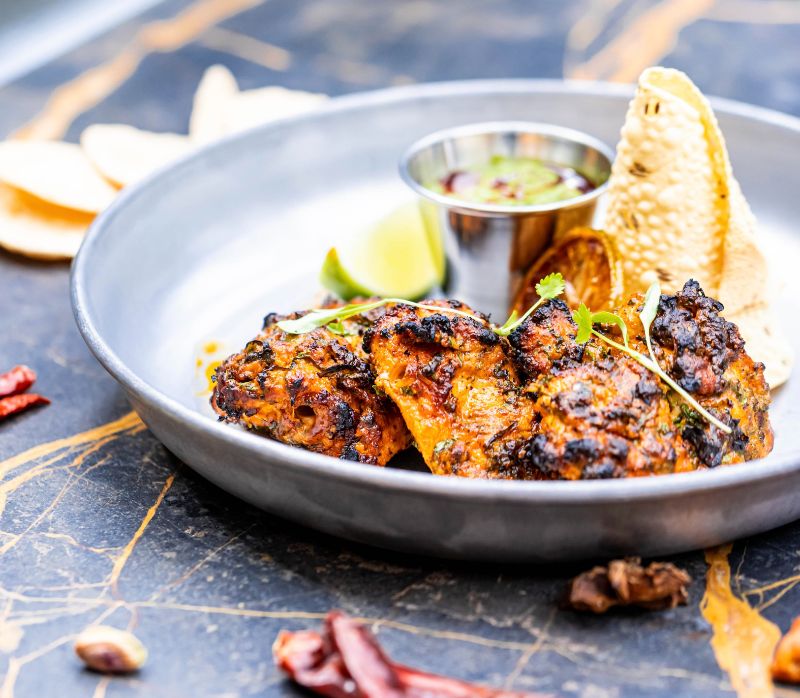 Before you start raiding your spice cupboard, it’s also worth considering the wider context of the weather and food culture in India. For example, drinking hot masala tea or eating fresh green chillies with your meal are commonplace where the temperature can reach well into the forties during the summer. The summer in India is one of six seasons unlike the four found in traditional Western climates.

Anubhav Srivastava is no stranger to instinctively knowing what ingredients make a successful restaurant. He cut his teeth in Chennai in what is a competitive market. He has two award-winning restaurants, including The KNK Project which recently won the best restaurant of the year. The success of any restaurant relies on having a solid team. Ritu is under the direction of Navin Prasad who works alongside the culinary director and  Head Chef, Shoeb Haider. Both Prasad and Haider are former Head Chefs at Benares of Mayfair. Francis Lama, the Restaurant Manager, has also worked at the Michelin starred restaurant.

Anubhav Srivastava has a desire to share his culinary experience and has a passion for serving authentic Indian food. While born and raised in London, he stays true to his Indian heritage. I ask what made him choose this well-heeled part of North-West London to open a restaurant. He explains that whilst studying at a nearby business school, he found he had to travel to Mayfair each time he wanted to enjoy a decent Indian meal. This was the ideal location to create Ritu.

The concept behind the project has been the culmination of Srivastava’s experience and learnings of his restaurants in India. The timing has also been an important factor; the availability of the venue in St. John’s Wood coincided with the hospitality industry slowly resuming. Ritu opened a year ago during the difficult pandemic period in which restaurants could only serve diners outside. It so happens that Ritu has a lovely terrace – perfect for dining alfresco on a balmy evening. 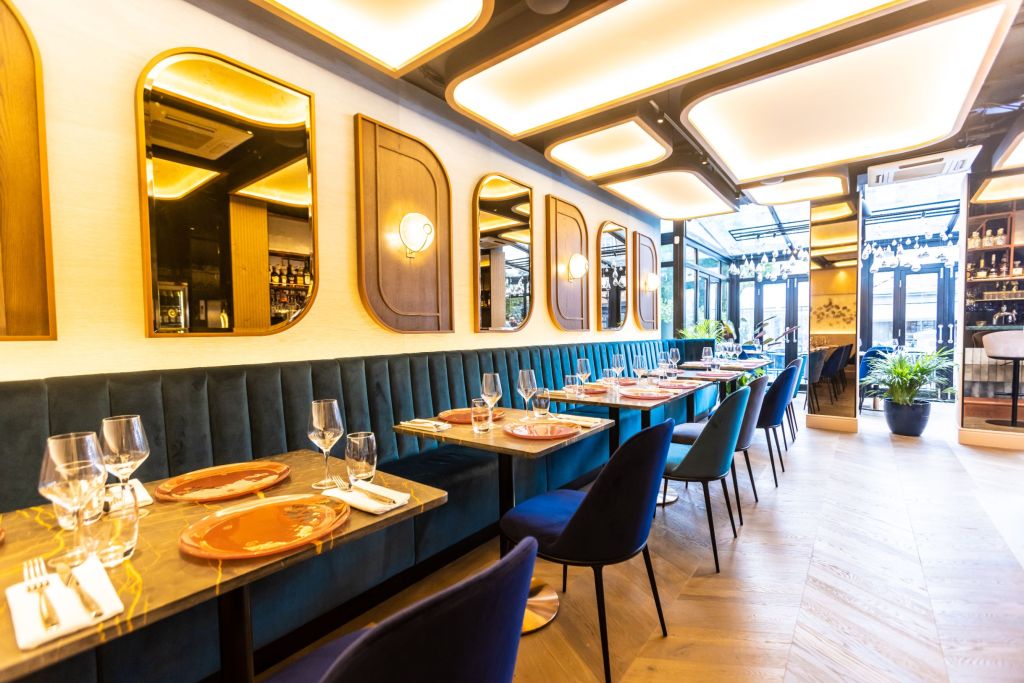 The attention to detail in the food at Ritu mirrors the detailing of the interior of the restaurant. Ritu’s decor represents the rhythm, flow and transformation of the seasons. For example, admire the silver cone-shaped ornaments hanging from the ceiling, a reference to rain droplets of the monsoon. Or look at the canvas at the rear of the restaurant that shows autumnal leaves and flowers. The seating is a peacock blue set again the natural tones of marble and wood. 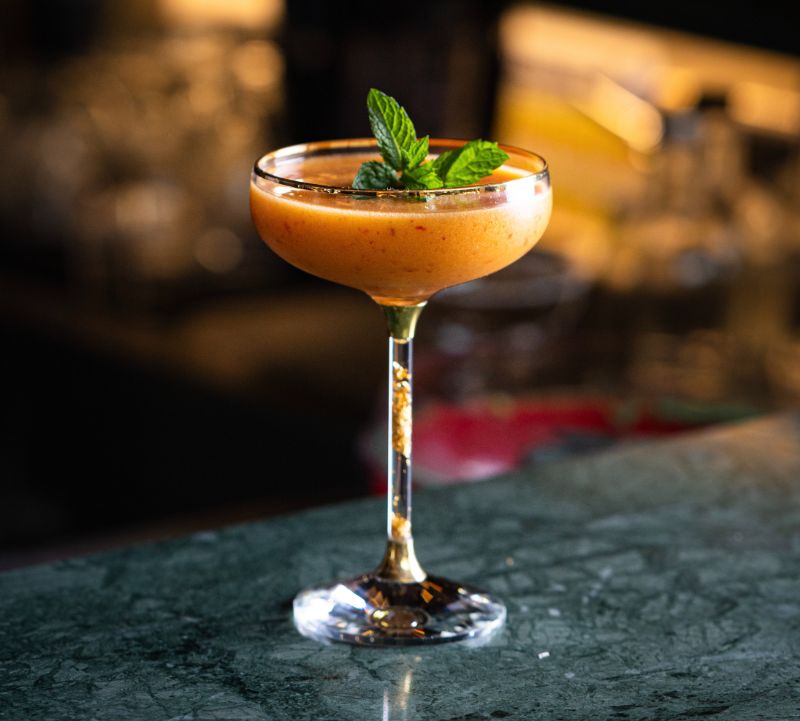 Lama recommends a Mirchi Mango Masti, or what he likes to refer to as the Mumbai Martini. It consists of white rum, mango syrup, ginger, curry leaves, fresh lime, sugar, and fresh green chili for the garnish. The drink is not too sweet, which sits well with me. The garnish adds a warm, gentle spicy taste. There are several small chopped chillies floating in the cocktail and it’s rather easy to consume as you take a sip. Do refrain from eating the garnish unless you have a particularly strong tolerance for hot chillies! The English Gimlet is a cocktail made with Hendricks, cordial, and vermouth. The cocktail arrives in a charming glass teapot and saucer. It’s a refreshing cocktail and an excellent choice for a summer’s evening.

We all know someone that would boast about having requested the waiter to serve them the hottest curry on the menu and with extra chilli – a hot curry [does not] maketh the man! At Ritu, they do things differently explains Anubhav Srivastava. It’s not necessary for diners to request a ‘mild’ version of a vindaloo curry as the dishes are cooked with specific chilli strengths and so the staff can recommend dishes according to your taste. There are also dishes without any chilli if that’s what you prefer.

The menu at Ritu is a take on some traditional dishes as well as some that are new to the Indian food scene. For example, the masala seared scallops or the kadhai duck are not your typical Indian dishes. The menu has been co-created by Prasad, who has run many high-end restaurants. He also spent eight years traveling in India and learning about its rich cuisine and his endeavours are reflected in the menu. For example, no one state of India is the focus of the menu, instead you will experience a ‘full Indian experience’, with chicken recipes from Kolkata to fish dishes from Goa. Some dishes have never left India until now according to Prasad. There is also a vegan menu and includes interesting dishes such as jackfruit masala. 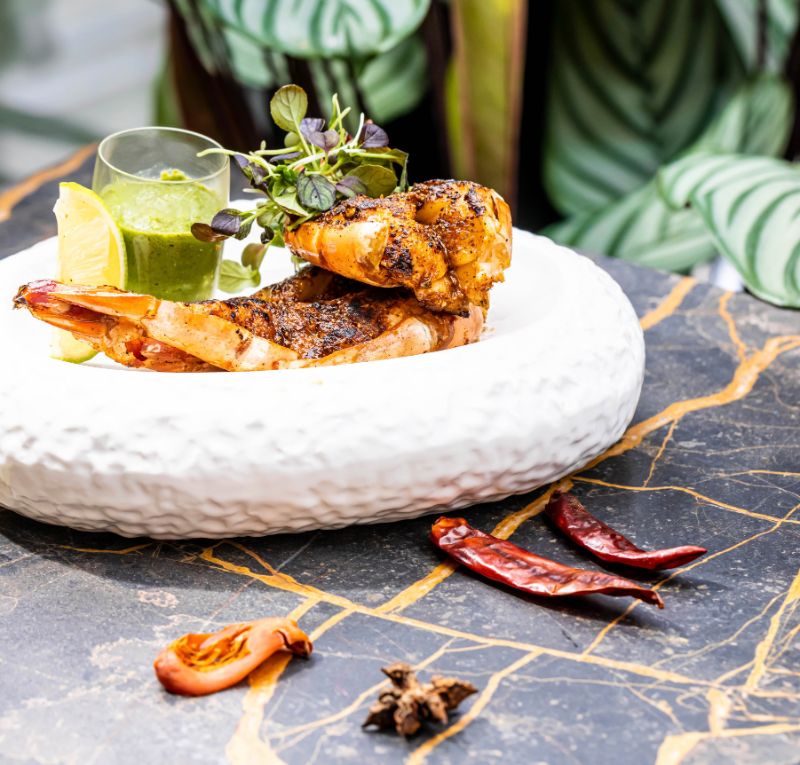 We start with gunpower prawns. A pair of jumbo prawns marinated in gunpowder, grilled, and served with a delicious masala caesar sauce.

We move on to the crispy fried Kolkata chicken lollipop, which are chicken wings marinated with spices and cooked in a Kolkata style. You’re invited to dip the lollipop into a spicy coriander sauce. Next, it’s onto the tandoor and the popular grilled Rarha lamb chops with a garlic marinade. These delicious lamb chops are comparable to the ones at Gymkhana, which are a particular favourite of mine. 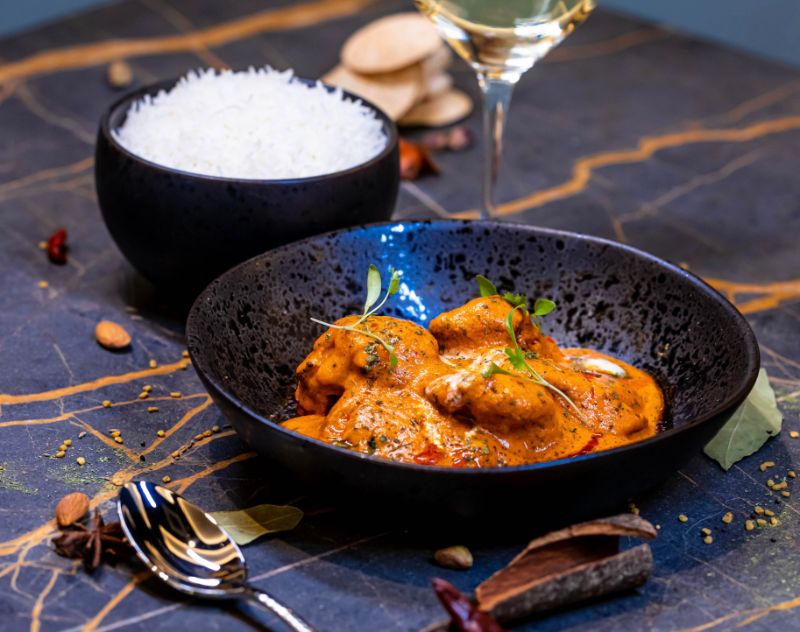 For curries, we have dhaba makhana chicken, which is a version of butter chicken with sliced garlic. 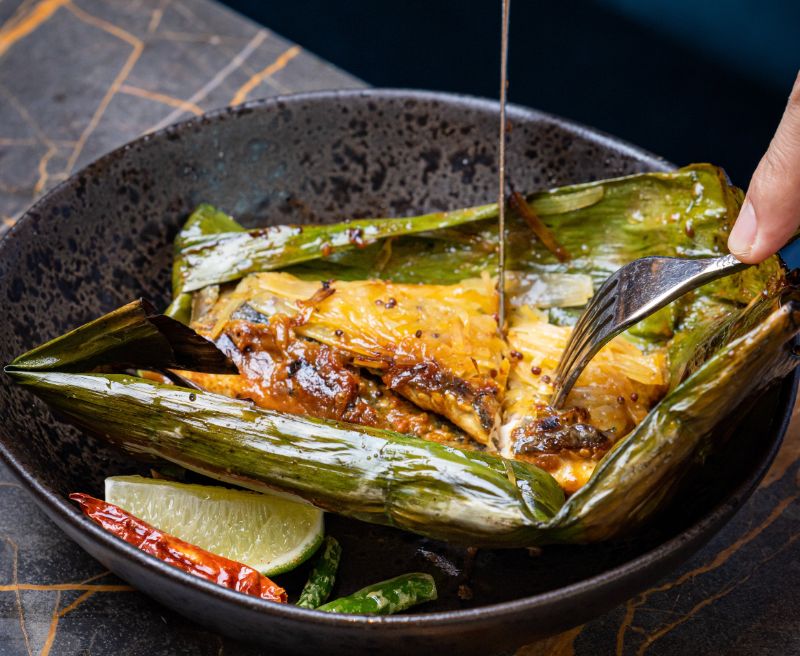 For the fish dish, we try the tamarind and tomato chutney spiced sea bass fillets, wrapped, and steamed in a banana leaf. Compared with sous vide, I find food that is parcelled and steamed in a leaf to be both visually pleasing and gives a subtle sweet flavour to the fish.

To finish off, we ordered the gulab jamun, shiny dumplings in a cardamom scented sugar syrup and pistachio kulfi ice-cream. The perfect end to the meal. 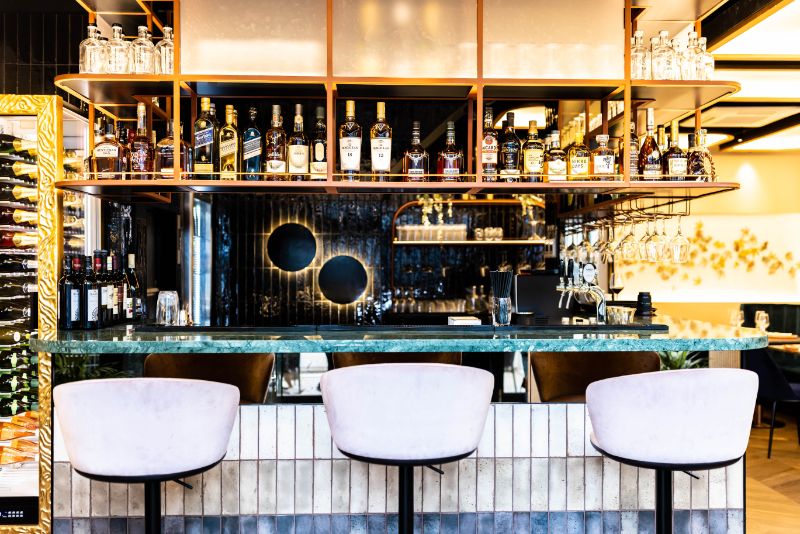 We drink Amarone Podere, Cariano Le Bertarole – Veneto and Chablis, Domaine Elevin (Burgundy) which pair well with the food. With a good wine selection and a bar that stocks a range of fine whiskies and Cognac, Ritu is more than your run of the mill Indian restaurant in a residential part of London. It has an exciting menu that adds a twist to otherwise familiar dishes. You won’t find a chicken tikka masala at Ritu, but you will find unique dishes that have been created to rival the high-end London restaurants.

So, before you place that order for your new portable air conditioner, consider the healthier and tastier alternative to keeping cool this summer. And remember, there are six seasons to enjoy eating fine Indian cuisine at Ritu, not just the summer.

A post shared by Ritu Seasons of India (@ritu.london)