We heard whispers that Wolfgang Puck’s outpost, CUT Out at 45 Park Lane had some al fresco spring time treats on and off the menu. 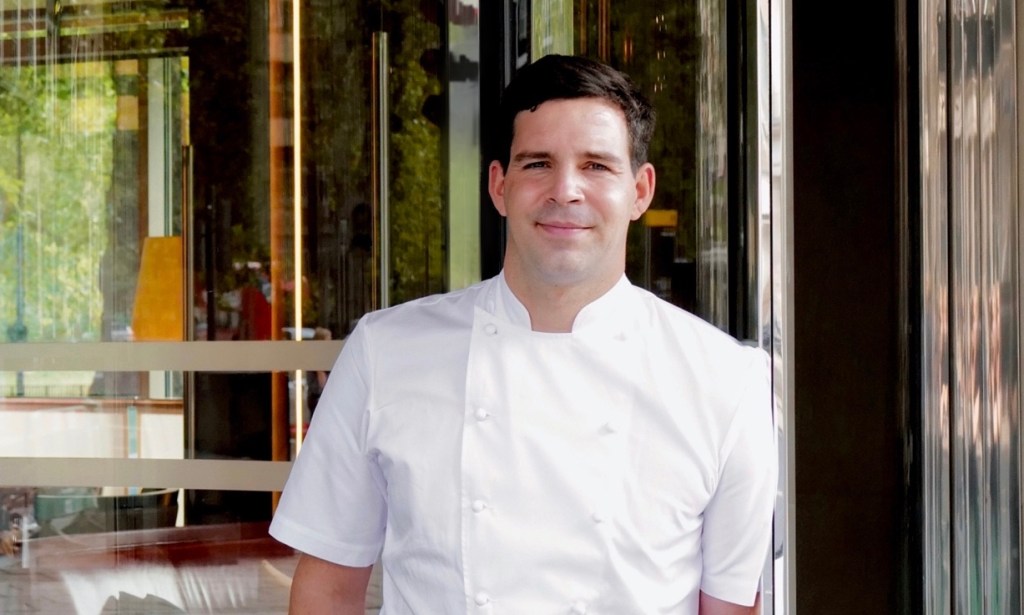 Tucked away on Curzon Street opposite Hyde Park, the impressive W1 postcode is hard to top but is matched by the global reputation of Wolfgang Puck and the arrival of executive chef Jamie Shears. Everything is overseen by the rather handsome Jamie, who is the driving force behind pushing CUT to even loftier culinary heights. 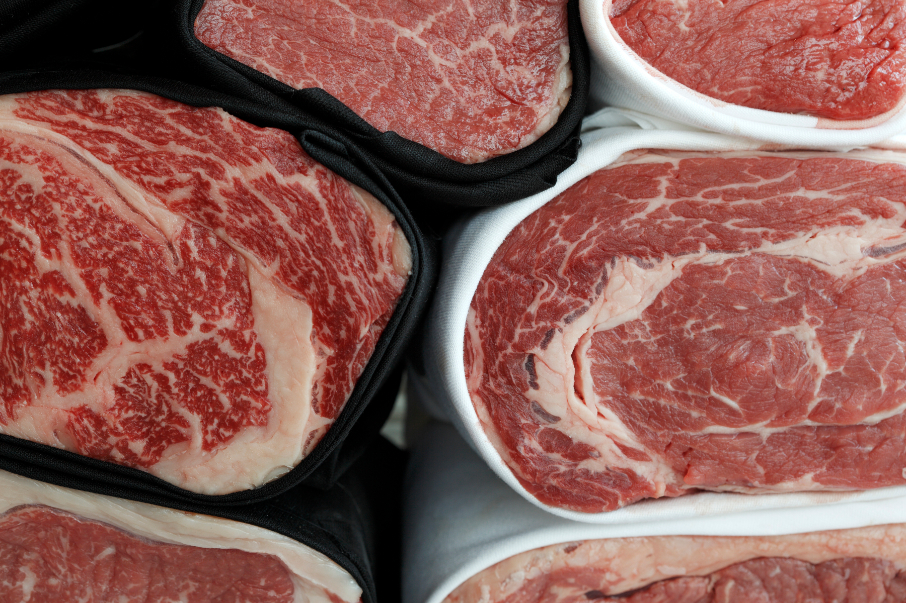 The most prized export to come out of Devon, Jamie is all about the ingredients from the freshest scallops to CUT’s most famous ingredient, beef. In 2014, CUT was the first in London to offer Japanese Wagyu beef and now, Jamie has added British Wagyu beef to the menu. A full blood English Wagyu from Earl Stonham Farms (from just 120 cattle) in Suffolk is dry aged for 21 days (not like other Wagyu beef) with marbling unlike you have ever seen. 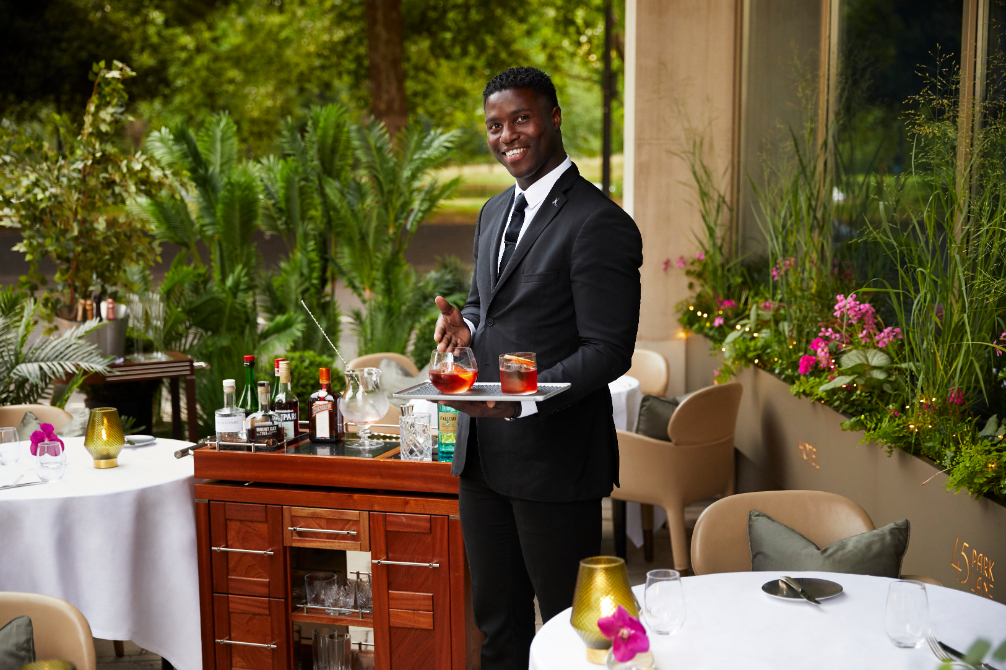 Space in London is a prized commodity and is hard to come by, especially here in exclusive Park Lane. The team at CUT Out have created a haven of greenery and elegant fairy lights, decorated with comfort in mind with fur throw blankets on each chair and tabletops embellished with fresh flowers and lanterns radiating a snug and romantic ambiance. 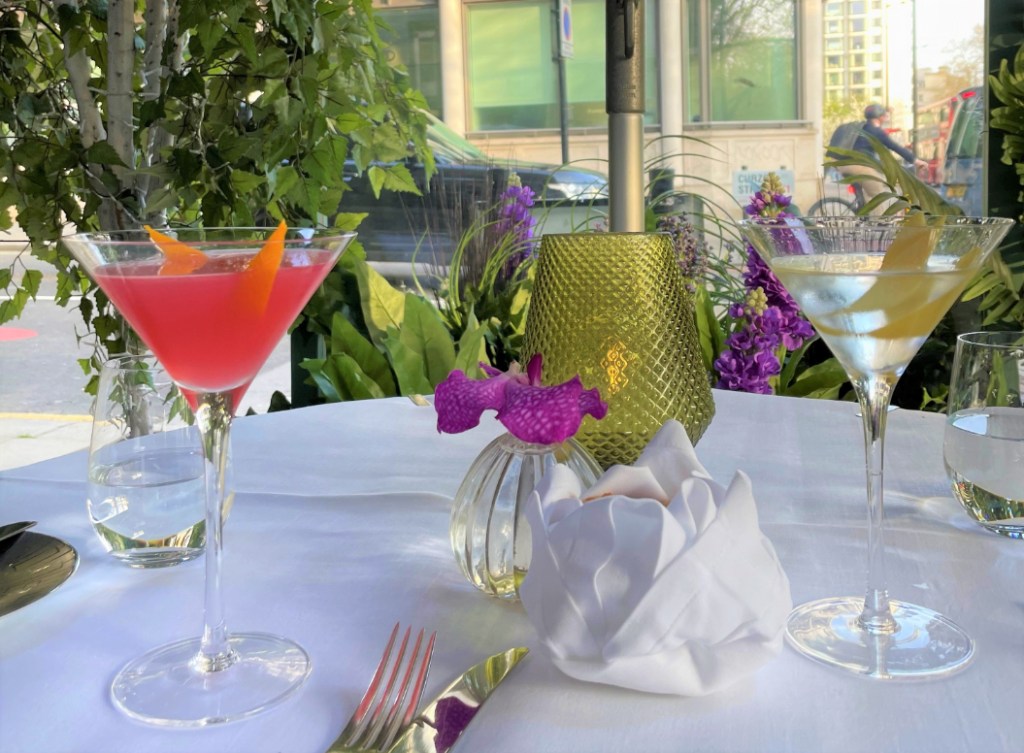 Starting with a Cosmopolitan and a Vesper inside seductive martini glasses, we were told we would be enjoying a tasting of Jamie where all self-control learnt throughout lockdown disappeared in an instant. Of course, a tasting menu of Jamie’s best bits was the only way to experience CUT Out.

16 hour baked pretzel knots and sour dough arrived, paired with creamy butter topped with rosemary salt. Moreish and meritorious. So moreish I had to ask for a side of rosemary salt which I kept dipping everything into. 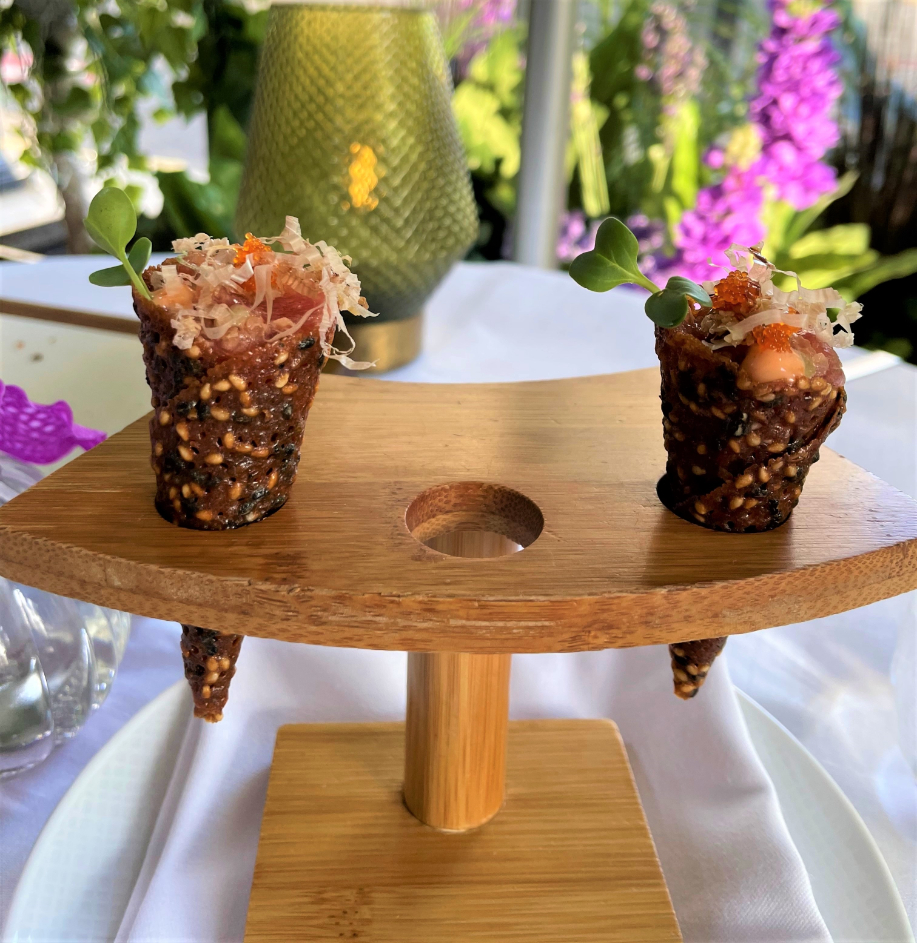 Time for some surf

Jamie’s approach to fish takes influence from East Asia using British fish. A dainty little sesame encrusted cone was stuffed with Bigeye tuna, soy, a touch of ginger and a wasabi aioli. Bigeye is great for sashimi with a high fat content with marbling near the skin and a much richer flavour than yellow fin. 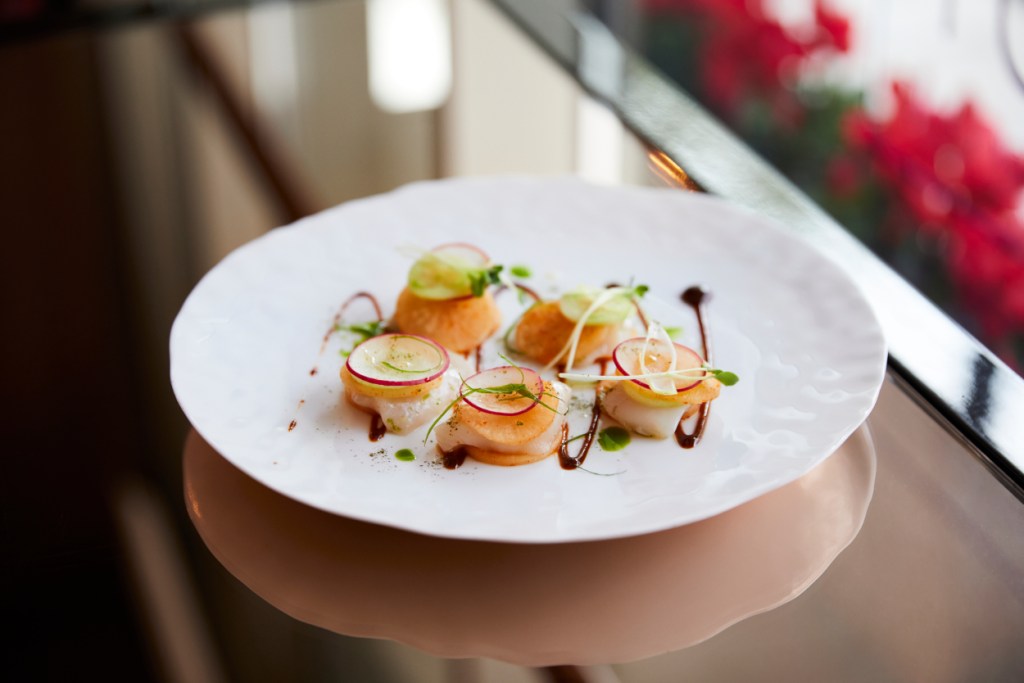 The exceptional Orkney scallops with Mooli Kimchee and Ssamjang (a spicy paste made from Korean soybeans and chili paste) had a flawless ratio of spice and citrus to compliment the freshest scallops. Some native Porthilly Oysters then came with Jamie’s captivating home made hot sauce (made with Devon chillies) served in a pipette serum bottle. I enjoyed it so much, I was pipetting the sauce directly into my mouth. Such depth of flavour. 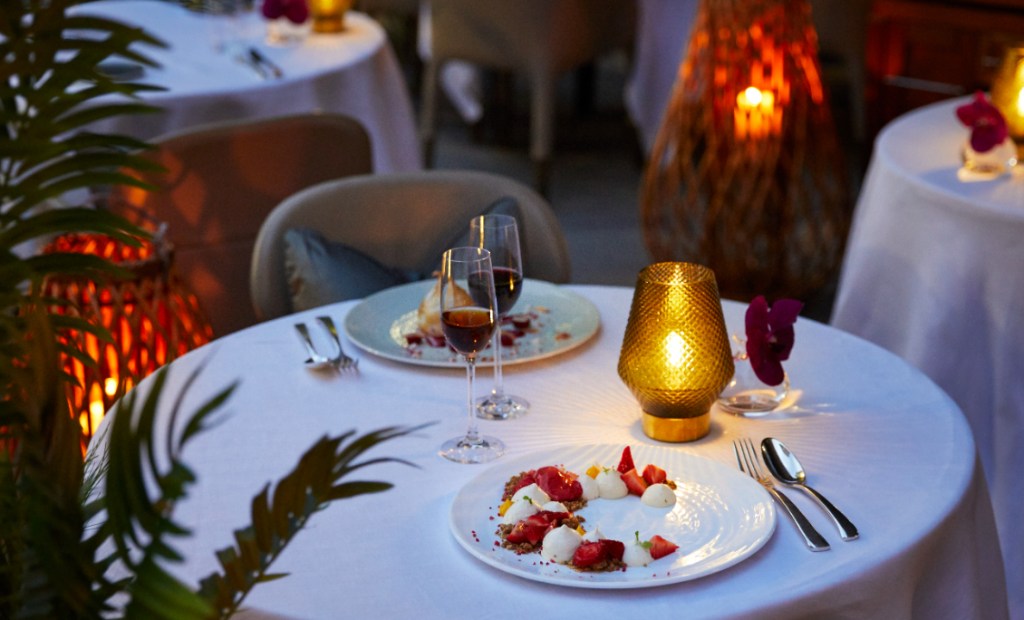 Everyone loves a pasta course. That mid point of a proper dinner. Jamie showed his non meaty skills with a solid pea and ricotta agnolotti with a generous sprinkle of 24 month parmesan. This was a favourite of mine and a definite recommendation for any vegetarians in need of a spring treat. 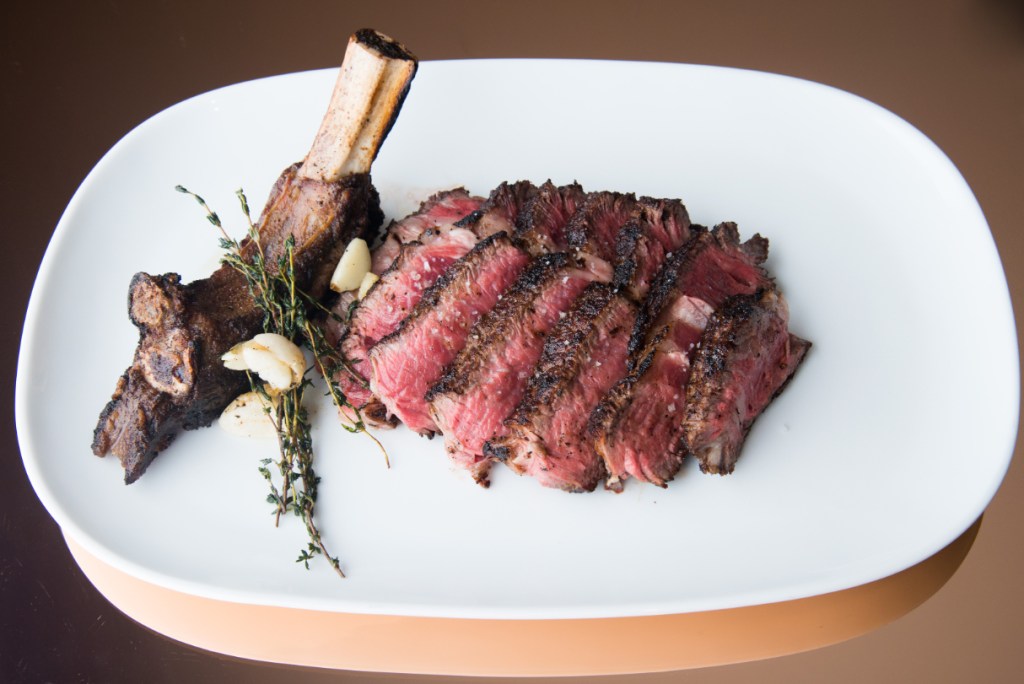 Time for some turf

Visiting CUT Out and not having steak is like going to the fun fair and not going on any rides. The anticipation was finally over and we had won the grand prize, a prime piece of Hereford ribeye.

The unctuous ratio of fat melting into the tender meat was rupturing with each bite, with the top layer grilled with a smoke infused char that intensified the flavour. We love a sauce and here there is an extensive list to choose from including a steak sauce, red wine bordelaise, chimichurri, green peppercorn and béarnaise, to name just a few.

The steak experience takes you on a clever sensory journey that is dedicated to every aspect of maximising the steak experience. I decided to feed my carnivorous instincts by adding bone marrow, soft and rich like butter with a delicate meaty texture. Never underestimate the sides as they complete the steak experience. A creamed spinach with a fried egg on top is a definite must have – rich, creamy and smooth. 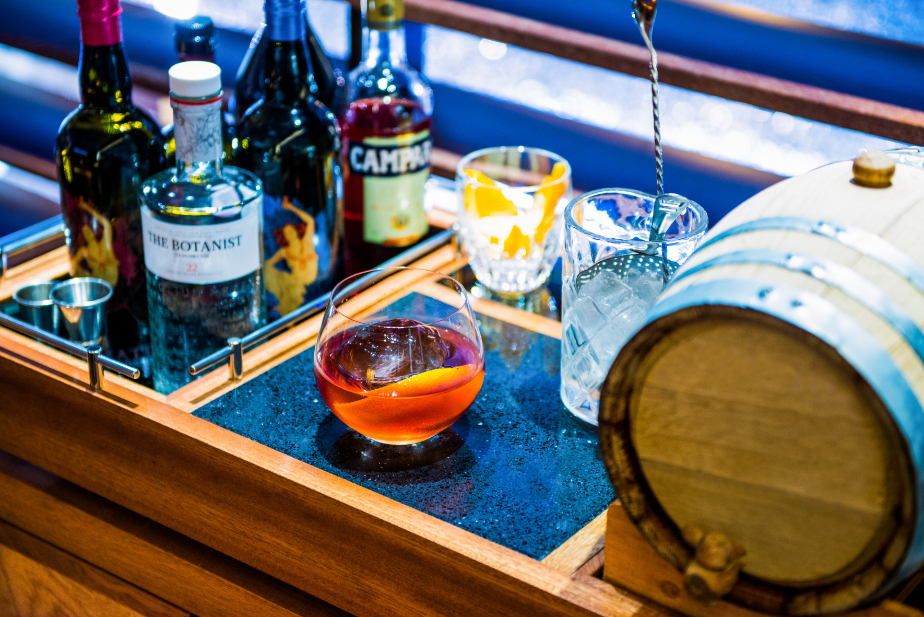 We were so distracted by Jamie and his meat that we almost forgot to appreciate one of 45 Park Lane’s signature Negronis. There is a new London Negroni using all British ingredients including Sacred gin, Sacred rosehip bitter distilled in London and English spiced vermouth. I was expecting something not quite like a Negroni but it was REALLY good. In a blind taste, I would challenge any Negroni lover to choose which one used Sacred’s English version of Campari.

CUT Out at 45 Park Lane has been reborn from the long break and Jamie Shears along with restaurant director Ahmed Elnozahy are ready to take you on a culinary and sensory journey.

All imagery courtesy of The Dorchester Collection, unless otherwise stated.