The Ellinikon: Could this be the new golden age of sustainable luxury development?

A new historic Mediterranean coastal development is underway in Athens at the site of a former airport. The world’s finest architectural and design firms are involved in transforming the once bustling Hellinikon Athens Airport into an exciting new sustainable district – The Ellinikon.

As one of the largest urban regeneration projects in Europe, The Ellinikon will consist of several landmark buildings that will transform the Athenian coastline over the next four years. The project is being undertaken by Lamda Development who is responsible for building what will become Europe’s largest coastal park. The Ellinikon will include luxurious apartments, shopping malls, hotels, a marina and a casino. The development will breathe life into the Athenian coastline, creating The Ellinikon Riviera. There will also be a new metropolitan park that will be situated in the centre of The Ellinikon.

The resurgence of economic prosperity in Athens has fostered much interest in this development. The Ellinikon is set to become a symbol of Greece’s financial recovery and the world’s foremost model in sustainable living. But what does the future in luxury development look like when entwined with sustainability?

The Ellinikon Masterplan is created by the architectural firm Foster + Partners. It outlines phase one of the project, consisting of the buildings and infrastructure for delivery in 2026. Metro stations, healthcare, schooling, the business district, residential and hospitality will all be accessible within a 360-degree city experience. Moreover, The Ellinikon will be a 15-minute city. The principle being that you can walk from the centre of The Ellinikon Park to the outer suburbs of the development in 15 minutes. The interconnected infrastructure will result in short commute times. There will also be a smart mobility scheme for e-bikes and e-scooters.

The Ellinikon will be utilising state-of-the-art technology to enable it to become a smart district. The innovative solutions will provide a future-proof framework. For example, smart technologies will allow the monitoring of water level rises, environmental conditions and manage street lighting. Smart buildings will optimise energy and water consumption. Smart energy will make use of renewables, including solar panels to reduce the environmental footprint.

The Riviera Tower, also designed by Foster + Partners, will form the central part of the masterplan. It will be Greece’s first luxury residential tower next to the water. It will take its inspiration from the ecological and cultural aspects of the Mediterranean landscape. There will be a limited selection of penthouses and a collection of 1 to 5-bedroom apartments available. Each apartment will be designed to the highest quality specification. The 200m tower will create a new model for sustainable contemporary living. For example, by using smart applications you will be able to operate kitchen appliances, heating and lighting. The sustainable design of the tower will enable the balconies to have suspended gardens; the tower will be immersed in nature. The dual aspect apartments will provide panoramic views of the Athenian coastline, Aegean Sea and the mountains. The gated complex will have a pool as well as spa facilities. It will provide easy access to the beach and luxury marina facilities, including a yacht and beach club.

During a tour of the vast development site, we visit the disused International East Terminal building. The building was designed by Finnish architect Eero Saarinen. It was one of Saarinen’s last works and opened in 1969. The objective of Saarinen’s design was to combine function with 20th century technology and to embody the Greek spirit. It was in a sense the symbolic gateway to modern Greece. The building is listed, due to its cultural heritage. The airport was part of the era that is nostalgically referred to as the ‘Golden Age’ of flying, where glamour and luxury were the bywords for flying. The building today is a time capsule. You can imagine what it was like in the 60s and 70s – the terminal building filled with the glamourous jet set or Olympic Airways flight crew walking in unison in their chic Chanel-designed uniforms.

While most of the other terminal buildings have already been demolished as part of the development, Saarinen’s East Terminal building will be restored and repurposed as a museum. This restorative approach is being undertaken throughout the development. Sustainability is at the heart of this project; repurposing or recycling existing infrastructure or natural resources as well as building upon the rich history of the site. 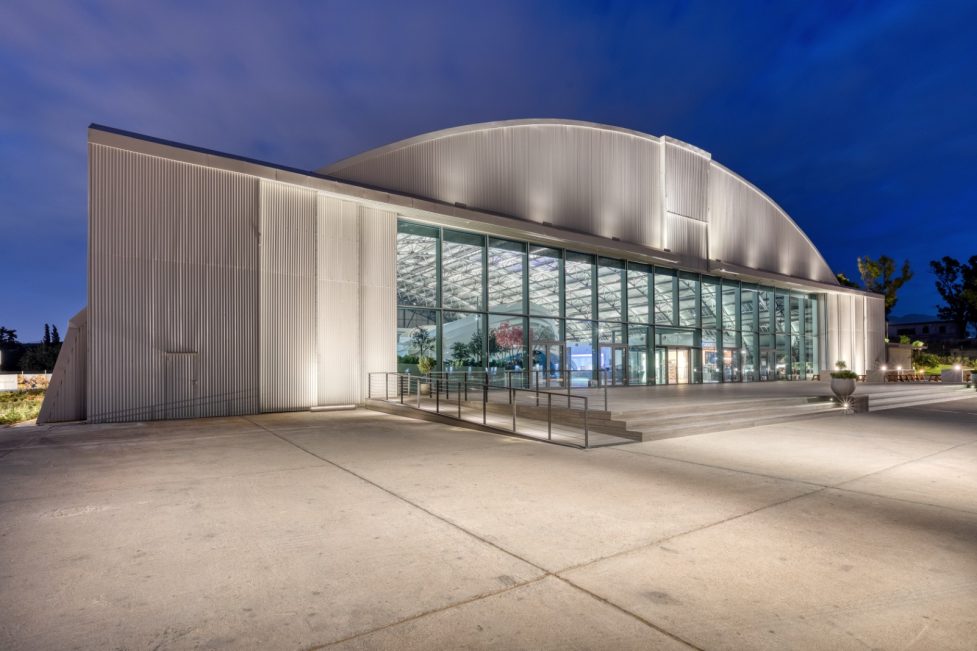 To appreciate the ambitious vision of the developers, we visit The Ellinikon Experience Centre. The centre opened to the public in April this year and has welcomed over a million guests since its launch.  There are over twenty interactive and multi-sensory exhibits housed inside this former Hellenic Air Force hanger. The historic metal structure has a listed building status and was built in 1950.

The experience centre is unlike your typical show flat. Imagine showcasing an entirely new metropolis and you’ll get a better understanding of its undertaking. The Ellinikon Experience Centre is one of the most innovative visitor centres in the world. Inside this historical hanger, you will discover the sheer magnitude of The Ellinikon development as well as the creative innovations deployed as part of its sustainable development. 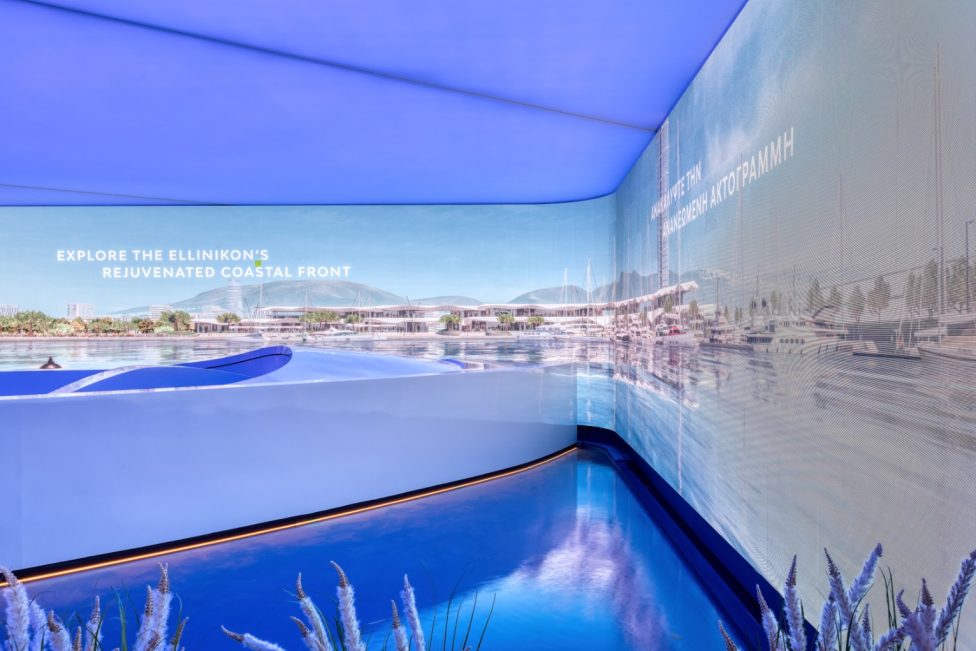 Begin your journey with a boarding pass which has been pre-programmed with your name. To activate the exhibits, insert the pass into the various experiences. For example, the “Living by the Sea” exhibit allows you to view the development from the perspective of the coastline and marina. As you board the interactive yacht, insert your pass into the slot next to the throttle. Push the throttle forward and take the helm. Feel the wind in your hair as you sail along the virtual coastline of The Ellinikon Riviera. The 4D experience also allows you to feel the vibration of the engine and the sound of the waves crashing into the sides of the vessel. 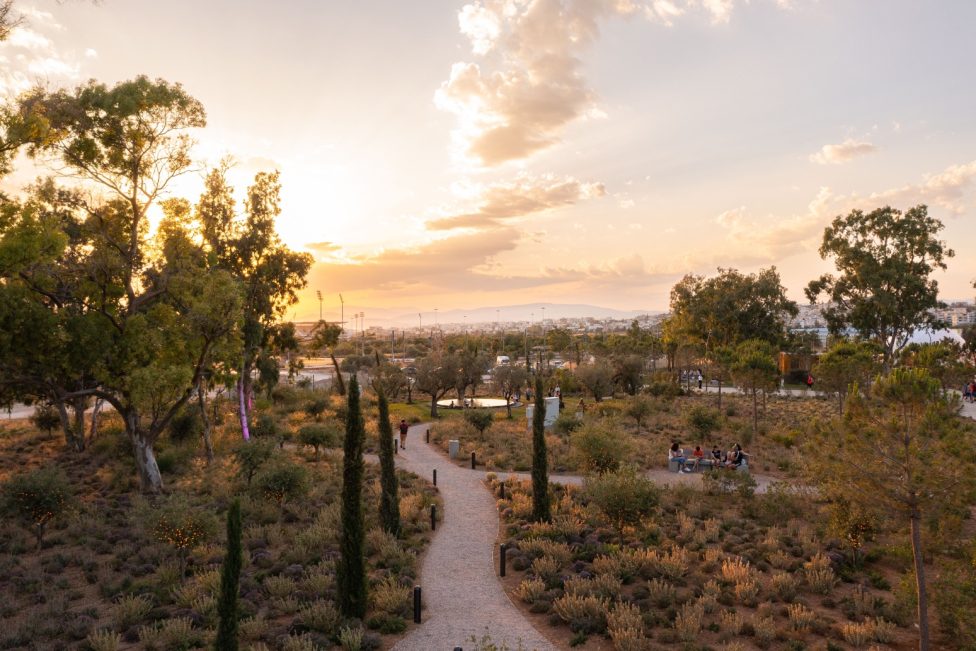 With a lack of recreational spaces in central Athens, The Ellinikon Experience Park is welcome news for Athenians. It’s a park for all ages where you can relax, have a picnic with friends or even work out. The park is a short ride from the centre of Athens. The park was launched in December of last year. It’s the first part of The Ellinikon Park to be completed. 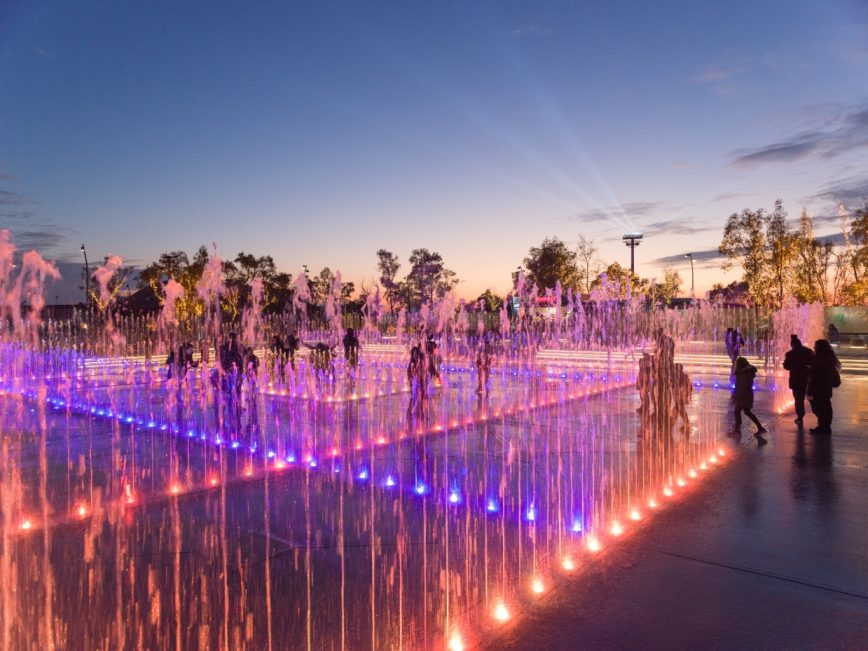 The social hub and central attraction of the park is the Water Maze. The experience is a play fountain that’s choreographed to aquatic music. Children can also play in the Forest Playground. Themed around the site’s aviation heritage, the playground provides fun, education, and exploration. For somewhere more peaceful, there’s the Zen Garden; this is a dedicated space for quiet contemplation. If outdoor fitness whets your appetite, you can exercise using a range of training equipment and installations. 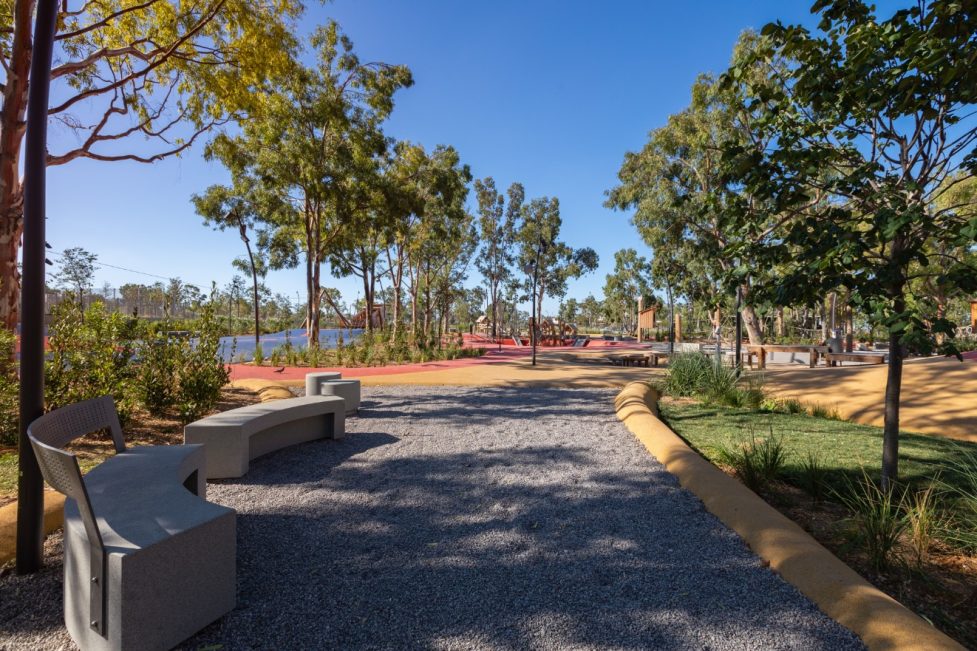 Recycling and repurposing are key to the park’s sustainable development and maintenance. For example, concrete from the airport terminal building has been repurposed as benches or footpaths. Another example is the use of stored rainwater and cleaned sewage water to use as part of an irrigation system. The system automatically waters the park, including all the plants. 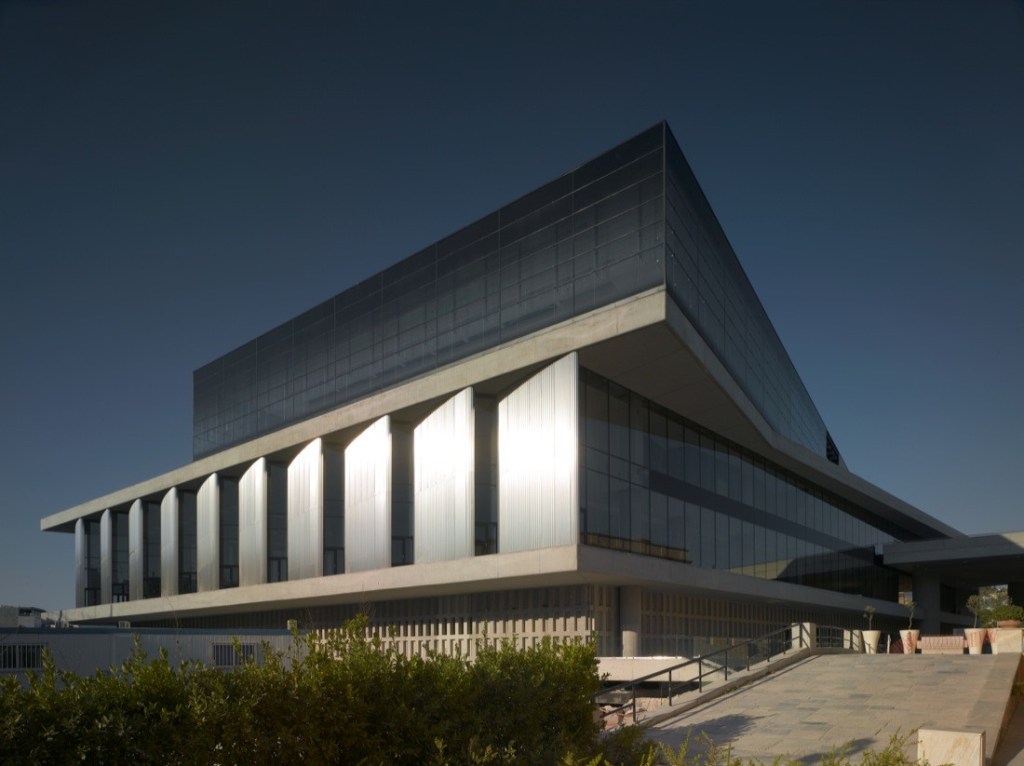 No visit to the Greek capital would be complete without a trip to the historic Parthenon, the great shrine to the goddess Athena. Do also take a trip to the Acropolis Museum. The museum will both enlighten and educate you about the wonders of the ancient citadel. You can see the Parthenon in the distance from the museum. This provides an interesting juxtaposition between the museum artifacts and the temple.

The museum sits upon an archaeological site of an ancient Athenian neighbourhood. Glass floor panels allow you to see the extensive excavations below. The exhibits on display are from various ruins such as the excavated sites of the sanctuaries and the settlement on the slopes of the Acropolis.

On the third floor of the museum, you will see the sculptural decorations from the Parthenon. These include the much-debated frieze marble reliefs. The original marble relief blocks sit alongside Elgin’s casts of the Parthenon marbles. The ‘sawed’ reliefs from the once whole blocks remain at the British Museum in London. The museum recreates the upper part of the Parthenon by placing the frieze sculptures in the order they would have appeared. You can also see sculptures from the pediment. Soaked in natural daylight, you can see what the Parthenon frieze would have looked like over two and a half millennia ago in all its beauty. Regardless of what your views are on the controversial topic of the sculptures, this great museum is worth visiting. 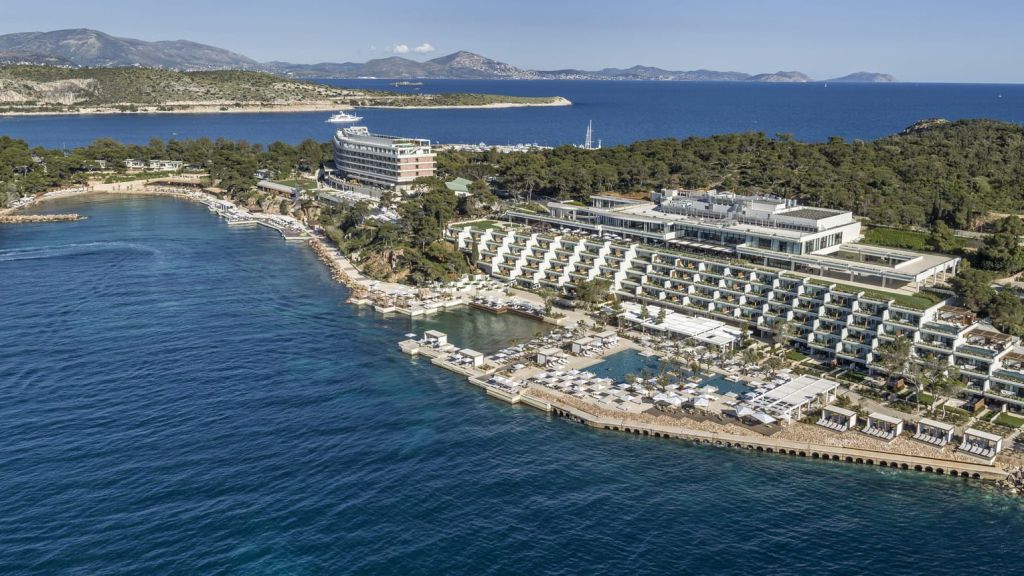 For a luxurious stay while exploring the city of Athens, there’s no better place than the Four Seasons Astir Palace Hotel. The stunning five-star resort is located on the pine-clad peninsula along the Athens Riviera. It’s a 30-minute drive from Athens International Airport or from the centre of Athens.

The hotel is the perfect retreat for relaxing after a busy day’s sightseeing. Whether you’re visiting the Acropolis or any of the many attractions in the city, you’ll be looking forward to spending time back at the hotel. Float in the saltwater cove, sip a cocktail by the pool or enjoy the Aegean sunset from your sea-view balcony. Life doesn’t get any more idyllic than this beautiful hideaway. You can also unwind by using the spa and wellness facilities, which includes the hydrotherapy pools. 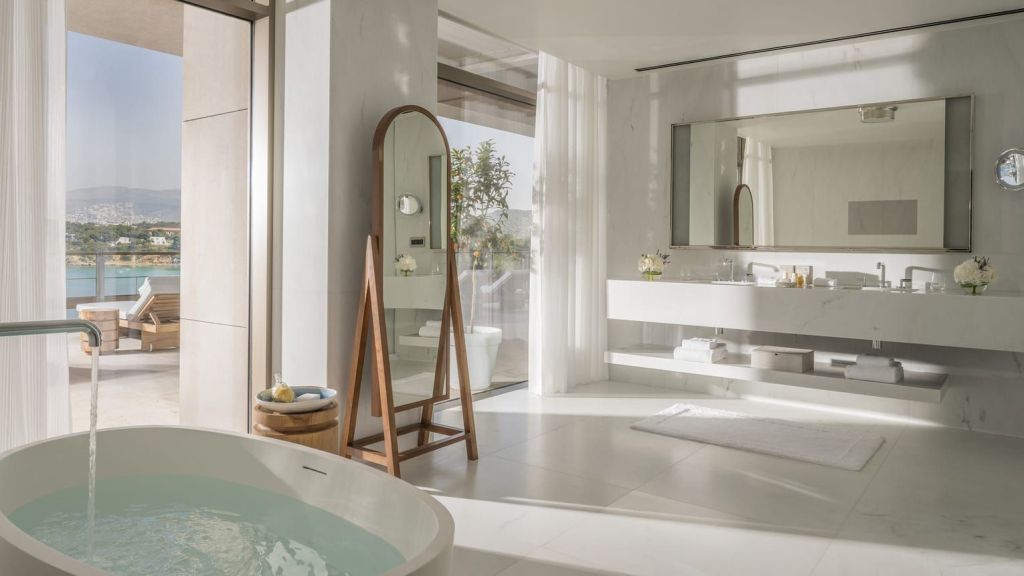 Enjoy the golden Greek sunlight as it fills your entire Nafsika sea-view room (44 m2). The rooms start from EUR 1,725 per night. It includes a very comfortable king-size bed and a luxurious marble bathroom with twin vanity basins. It also has a spacious private balcony with outdoor furniture; perfect for lounging in the evenings and soaking up the incredible view. The bathroom contains a rain shower as well as a deep bathtub. You can even enjoy the sea-view from the comfort of your bathtub, courtesy of the glass wall separator and balcony which I can recommend. For the bashful among you, there is an electric blind for privacy. If you’re wondering where the HD flat-screen TV is in your room, look towards the enormous glass mirror opposite the bed. It is a mirror until you press the remote control. But let’s face it, with the spectacular view and amenities available, you won’t be rushing to watch the TV!

The Parthenon has dominated the Athenian skyline since the mid-5th century BCE. This iconic building is the symbol of ancient Greece’s golden age. The very nature of this great monument standing today is testament to the great feats of engineering and artistry of the ancient Greeks.

It’s only fitting that the city that gave us the Acropolis and its classical influences in art and architecture, could now be witnessing the dawn of a new age. Will The Ellinikon belong to a golden age when viewed retrospectively in the decades that follow? Perhaps it will through the lens of sustainable living, in a world of ever depleting resources.

For more information on The Ellinikon, visit: theellinikon

For flights to Athens, visit: en.aegeanair.com

All imagery courtesy of The Ellinikon.