Wild Heart Bar & Shokudo was the destination for our Friday night sojourn at London’s only glam rock boutique hotel. 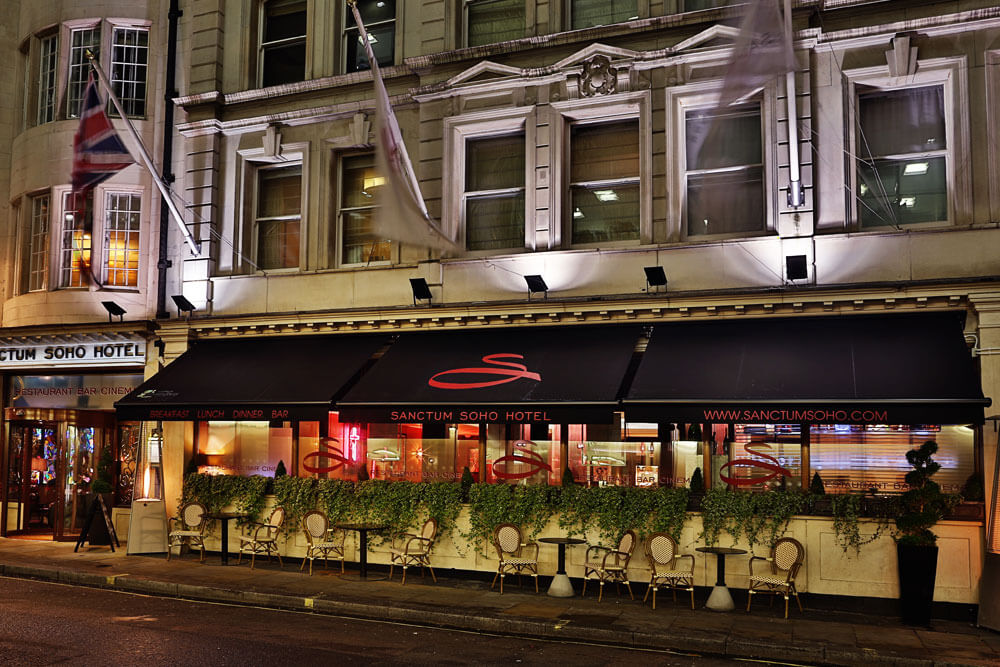 Where in London can you transport yourself back to the era pf rock and roll musical brilliance with a twist of modern Soho – a place where you can hang out with the likes of Jimi Hendrix, Janis Joplin, and maybe if you’re lucky, some living celebrities too? You Took the Words Right Out of My Mouth. Karma Sanctum Soho Hotel is a wonderfully tongue in cheek, family run boutique hotel that prides itself on being bold, shameless and just a little bit naughty. 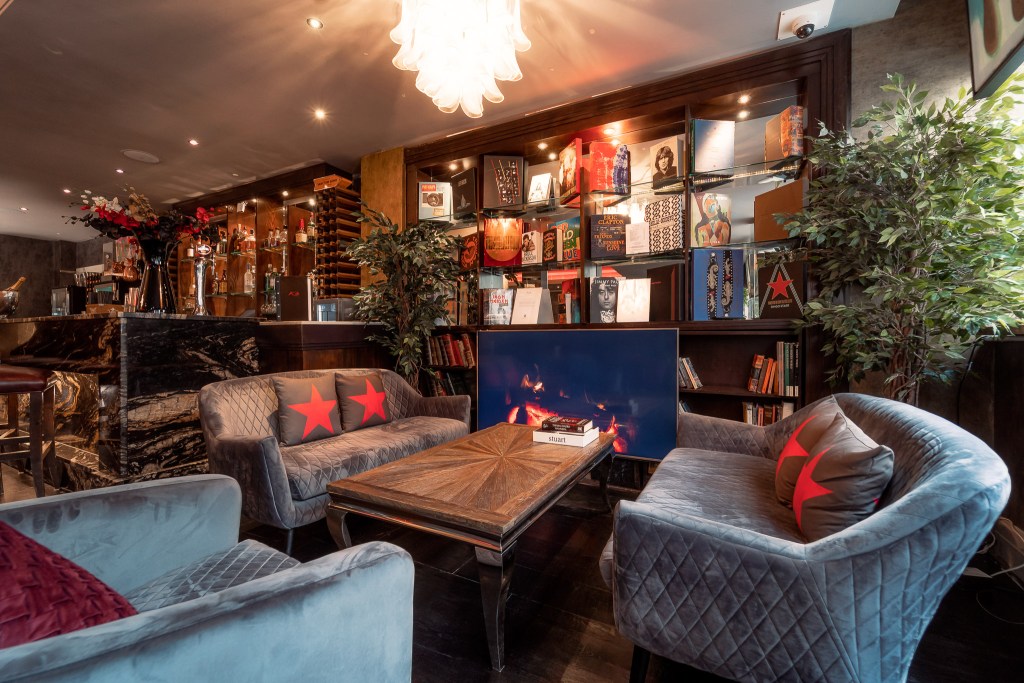 When you walk in to the hotel, you are immediately surrounded by various homages to one of music’s biggest and most influential players – the one and only Jimi Hendrix. Part of the famed 27 club, Jimi is known as one of the biggest trailblazers in the industry, remembered for such hijinks as notoriously setting fire to his guitar live on stage. Well, the hotel also owes a lot to Jimi’s wild side, some of the rooms are opulently decorated in black and red, leather and velvet, and you can even hire your own Harley Davidson or electric guitar if you feel like it! This is truly London’s original head-banger of a rock’n’roll boutique hotel.

Which is to say you shouldn’t really underestimate the food here. It’s no afterthought in the rest of the hotel’s shadow. It’s serious stuff. Head chef is the decorated Garry Hollihead, a three Michelin-starred chef who, in keeping with the hotel’s rocking vibes, his first job was actually as a drummer in a band in the 70s so he was thrown Out of the Frying Pan and into the Fire (or the other way around). 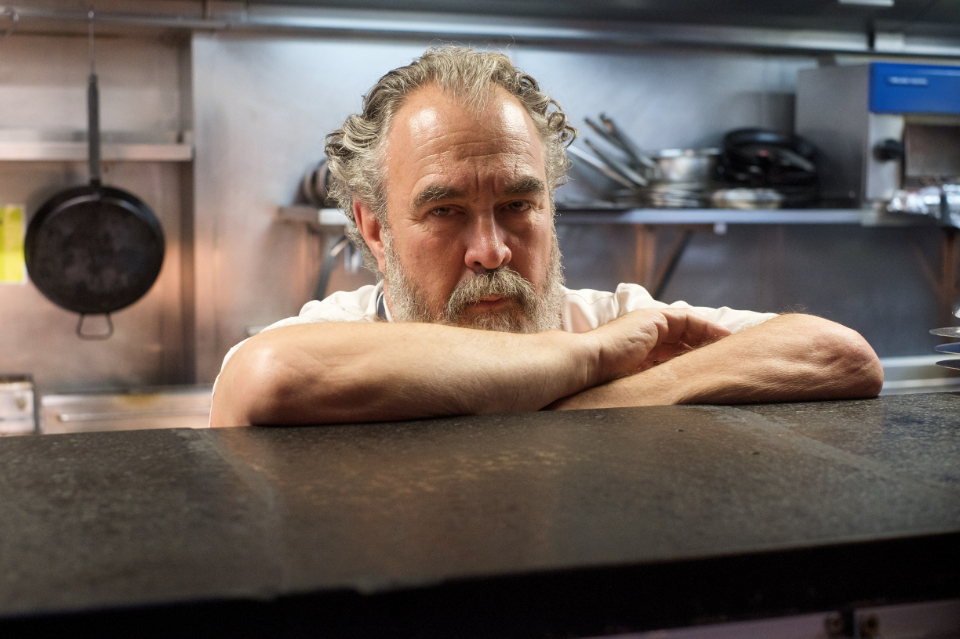 With extensive experience as executive chef at the Corinthia Hotel and L’Escargot under his belt, he was poached by the Head Honcho of Sanctum Hotels, Mark Fuller, to run Wild Heart Bar & Shokudo (which means restaurant). It is a sexy space, with black walls, shiny surfaces and soft velvet everywhere. I also find it incredibly comforting as I pore over the menu. 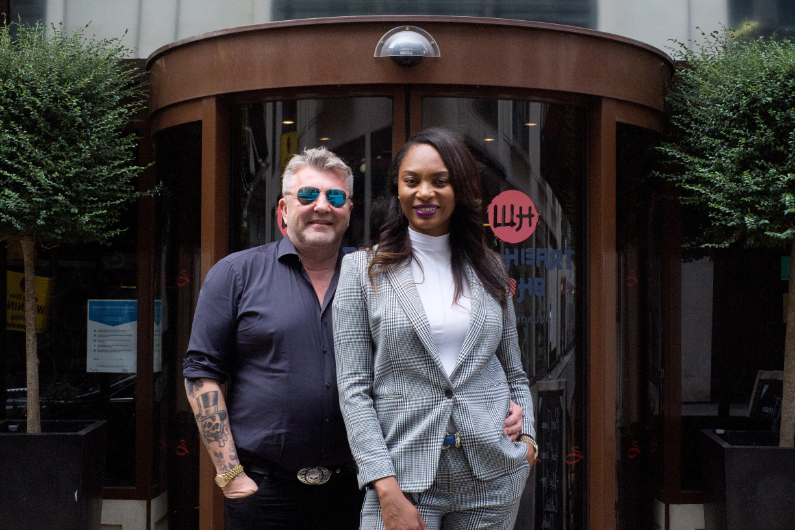 Service is of absolute critical importance here. We are lucky and grateful to have the wonderful Nadir looking after us for dinner, also ex-Corinthia. He is a long time friend of Mark Fuller and was All Revved Up with No Place To Go in an early retirement before being taken back like a Bat out of Hell to head up Wild Heart. Who Needs The Young and how many more Meatloaf songs can we fit into one paragraph!? If you are lucky, you will also bump into the Operations Director Sherene Fuller who oozes charm and elegance. You can just tell they really bloody enjoy their jobs, and that makes for an even better atmosphere. 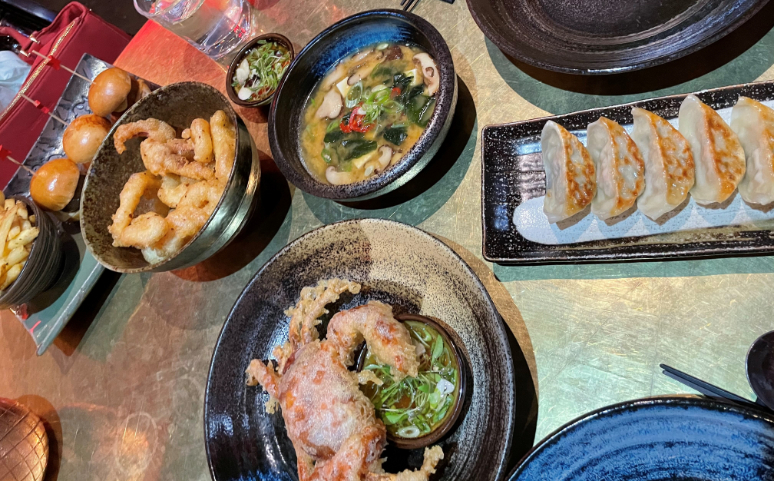 Garry Hollihead is a fantastic chef, and his menu is deceptively simple. You’ll find no fusion food here, just good old classic Japanese food. Particular highlights include excellently made chicken gyoza, a sublime and complex miso soup with tofu, and crispy softshell crab. You can really see Garry’s talents shine in the basic sounding “sliders”, three puffy buns with wagyu beef, chicken teriyaki and salmon. The wagyu slider was one of the best burgers I’ve eaten for some time, the meat juicy but soft, the marbled fat just melting through to the bun, no sauce needed. Oh Garry, you made our Rock n Roll Dreams Come Through. 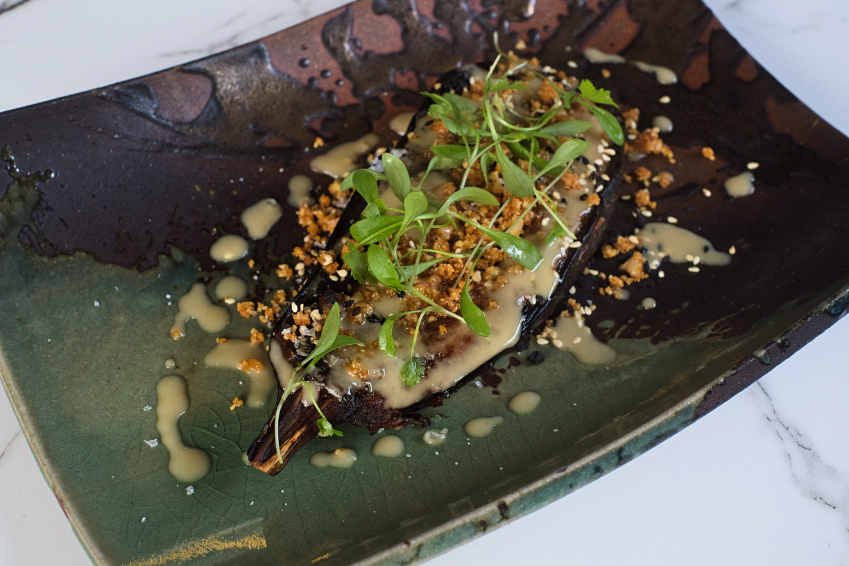 The aubergine – the kind of ingredient where Garry is Making Love Out of Nothing at All. A simple roast aubergine comes split in half, grilled with burnt bits cradling the outer layers and marinated in that wonderful umami ingredient of miso. Clever stuff. Another highlight is the miso marinated chargrilled sirloin with pickled veg. The sirloin retains its bite and tastes well-aged. The miso brings out the meat’s intense beefiness while the fat on the beef has been rendered slightly for maximum flavour – a real Dead Ringer For Love of a dish. We accompany our meal with various sakes, some cold, some hot, some sparkling. It’s nice that the restaurant has considered a comprehensive approach to sake, a rarity in the UK. 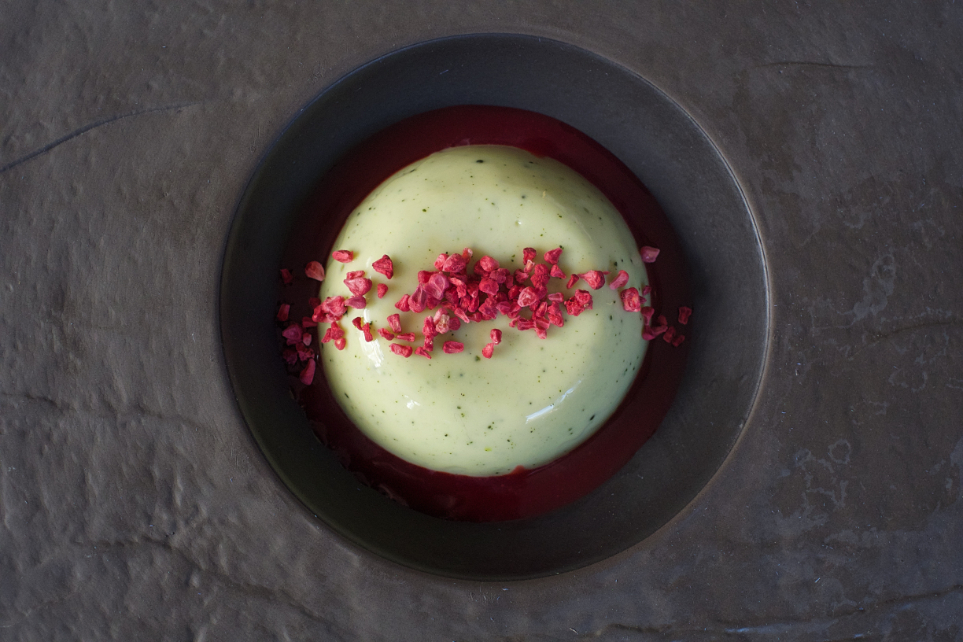 Heaven Can Wait so we end with some homemade mochi and vegan coconut cream chocolate mousse. I was more curious about the mousse than anything but I was surprised at how close it was to the egg white whipped version. My favourite however was the mochi. Garry has managed to get the chewy but soft mochi dough perfected, and they were served at that spot on just-melty temperature. Yum. 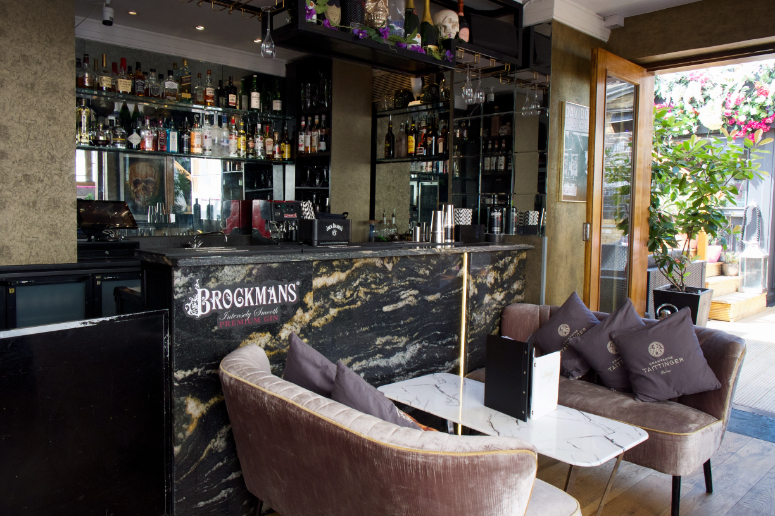 Did I mention there’s a rooftop?

Yes this cheeky hotel continues the surprises with a beautiful space at the top of the hotel which is used a bar, cigar terrace, jacuzzi party venue… you name it, Karma Soho Sanctum has it. The rooftop bar is available for members only, and has a handy retractable roof. 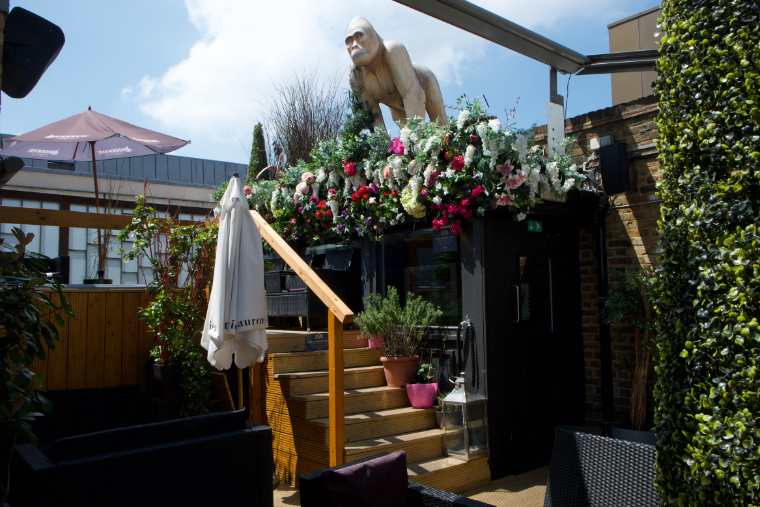 The jacuzzi is unfortunately only for hotel residents (otherwise things might get a bit *too* naughty and Objects in the Rear View Mirror May Appear Closer Than They Are). The bar menu also has a solid selection of Davidoff cigars and well made cocktails. 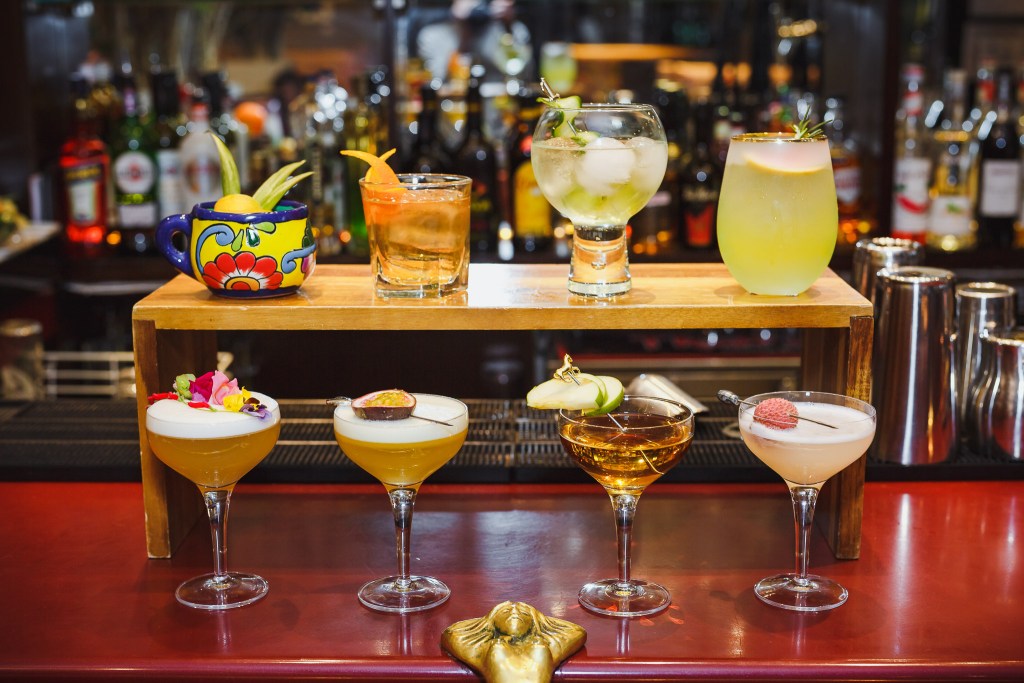 Karma Soho Sanctum is the kind of fun gem we at Luxuriate Life love discovering – where else could you have doors made out of leather, painted portraits of Amy Winehouse, a stone gorilla wearing a bikini, celebrity clientele and a Michelin-starred chef making you Japanese comfort food? While it’s still summer, you might end up seeing me on that rooftop with more than just a martini glass in hand… Now, I’d Do Anything for Love (But I Won’t Do That).