As a choice of musical, 101 Dalmatians musical feels like something of a hair shirt for producers. One can just imagine the conversations between Artistic Director Timothy Sheader and puppet designer Toby Olié – “You want how many??” – perhaps the desperate pleas to consider more manageable alternatives from the Disney roster – “The Fox and the Hound? Aristocats? I’m sure that’s overdue a reboot…?”. Add to the mix two covid-induced postponements, and the staging of this new 101 Dalmatians musical becomes quite the shaggy dog story. 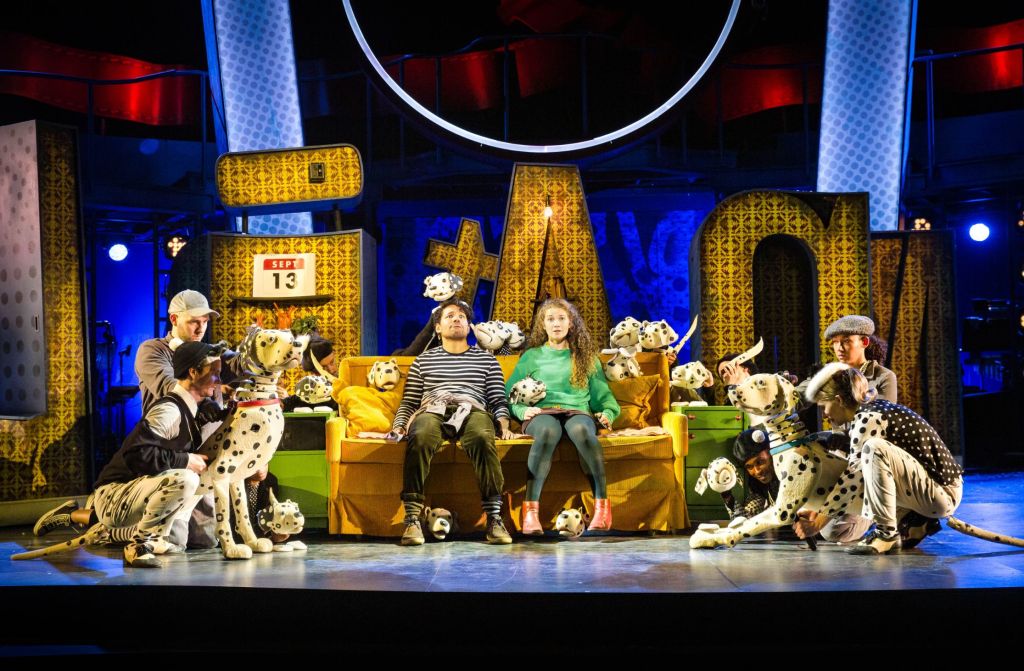 Poignantly nested in its original Regents Park setting where we recently enjoyed Legally Blonde, audiences find the Dodie Smith tale revived with a modern twist. Cruella de Vil (Kate Fleetwood) is a vape-puffing influencer scouring for new clickbait after a video of her striking a dalmatian goes viral. There are several eye-rolls at the thinly-veiled bids for social relevance – in 101 vocations of Katie Hopkins through cries for ‘British dogs for British people!’ feel somewhat forced, while Cruella’s parting instruction “DM me!” doesn’t’ quite muster the laugh it aims for. In spite of this, Fleetwood sings as the iconic villain, a role for which she would likely qualify based on her intimidating bone structure alone. Her heady jazz numbers balance against the jolly reprise of Dominic and Daniele (Eric Stroud and Karen Fishwick) in their kitsch apartment, bringing depth to an otherwise vanilla score. 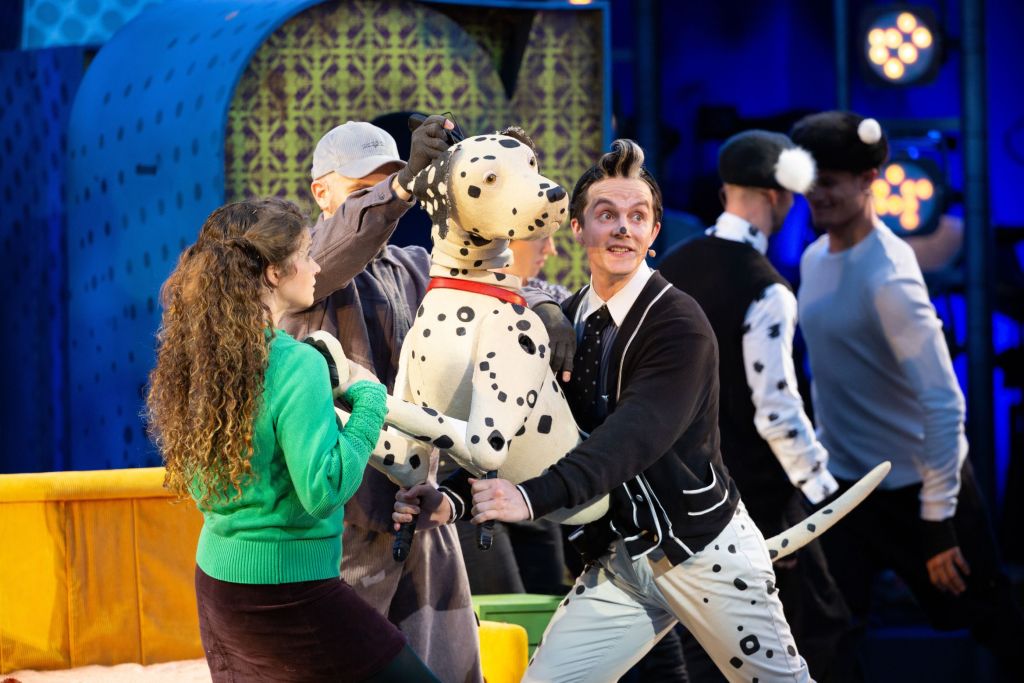 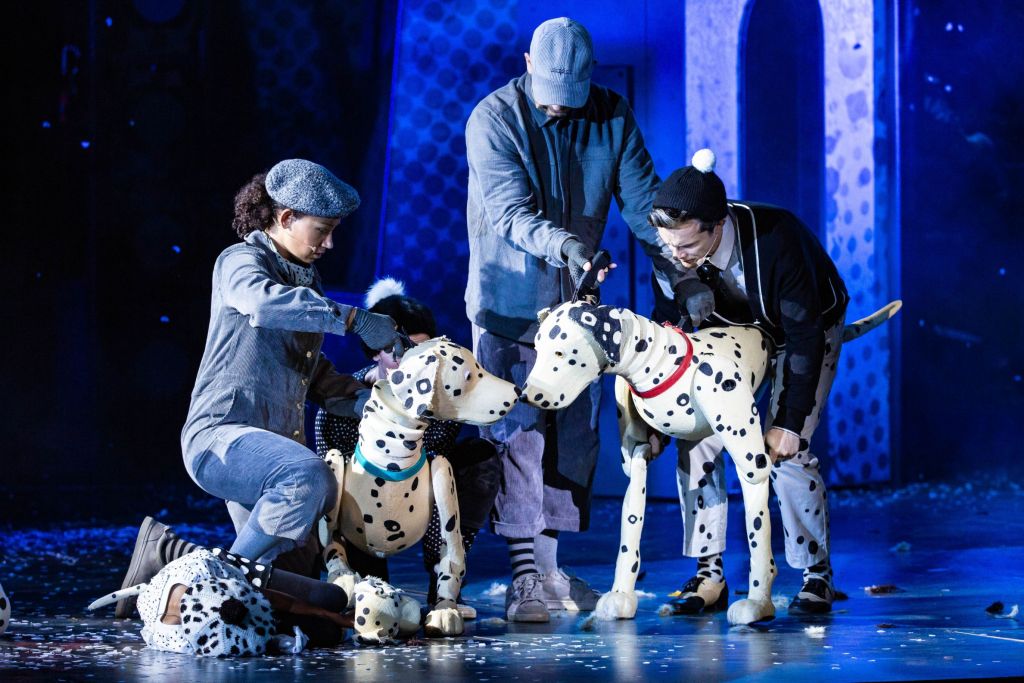 As the title demands, however, Olié has 99 problems even if a mummy dog ain’t one. En masse, the puppies are presented as disembodied puppet heads which can be simply tossed into a bag or strung to guitar necks. Visually exciting – but little to convey in the way of character. The second act takes a different tack, animating five breakaways in the form of child actors, a sweet addition that unfortunately saps momentum from the plot. Juxtaposed with the powerful vocals and presence of Fleetwood, songs such as ‘What the Bleep’ feel particularly pedestrian, and, for those in the know, uncannily reminiscent of the Think! Hedgehog road safety ads of the noughties. 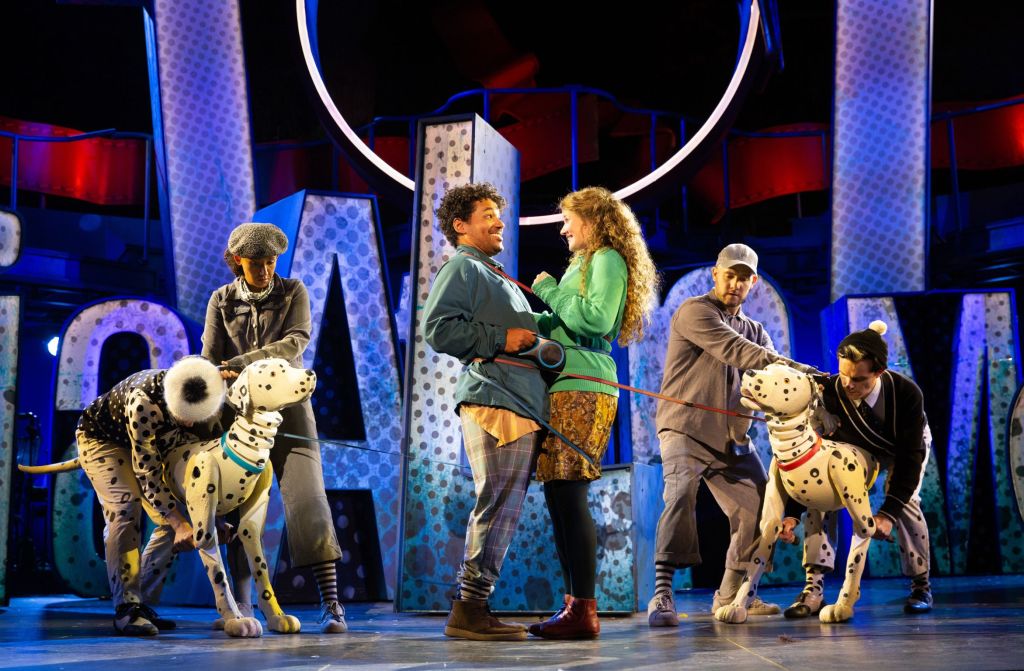 Most importantly, this is a musical with a wonderful sense of fun. London’s favourite dog breeds are brilliantly personified in SOS jam the ‘twilight bark’, which draws a sunglass-adorned Afghan Hound, sparring boxers and a guitar-shredding mutt. Ever the sadists, the children of the audience revel in Cruella’s cartoonish demise – eyes bulge from sockets, arms extend to twice their length, and a barely-intact pink sports car hurtles about the stage. The final surprise is received with predictable delight, even if it’s a familiar trick for audiences of ‘The Curious Incident of the Dog in the Night-time.’

I went into 101 Dalmatians expecting the impossible, and I’m not sure Timothy Sheader achieved it. But this isn’t a production that can be staged without some big compromises. As the Open Air Theatre’s first new musical since 1983, it’s a jubilant debut, and great family fun. Sure, its ruff around the edges, but even the critics have their soft spots…

All imagery courtesy of Mark Senior.