The Luxuriate guide to: The Best Indian restaurants delivering

It’s no secret that we love our Indian food at Luxuriate Life. Our scientist friends at Nottingham Trent University discovered that people can actually become addicted to curries because they arouse the senses and give us a natural high. An increasing number of Indian restaurants are now satisfying our addictions with many introducing delivery services for the first time. 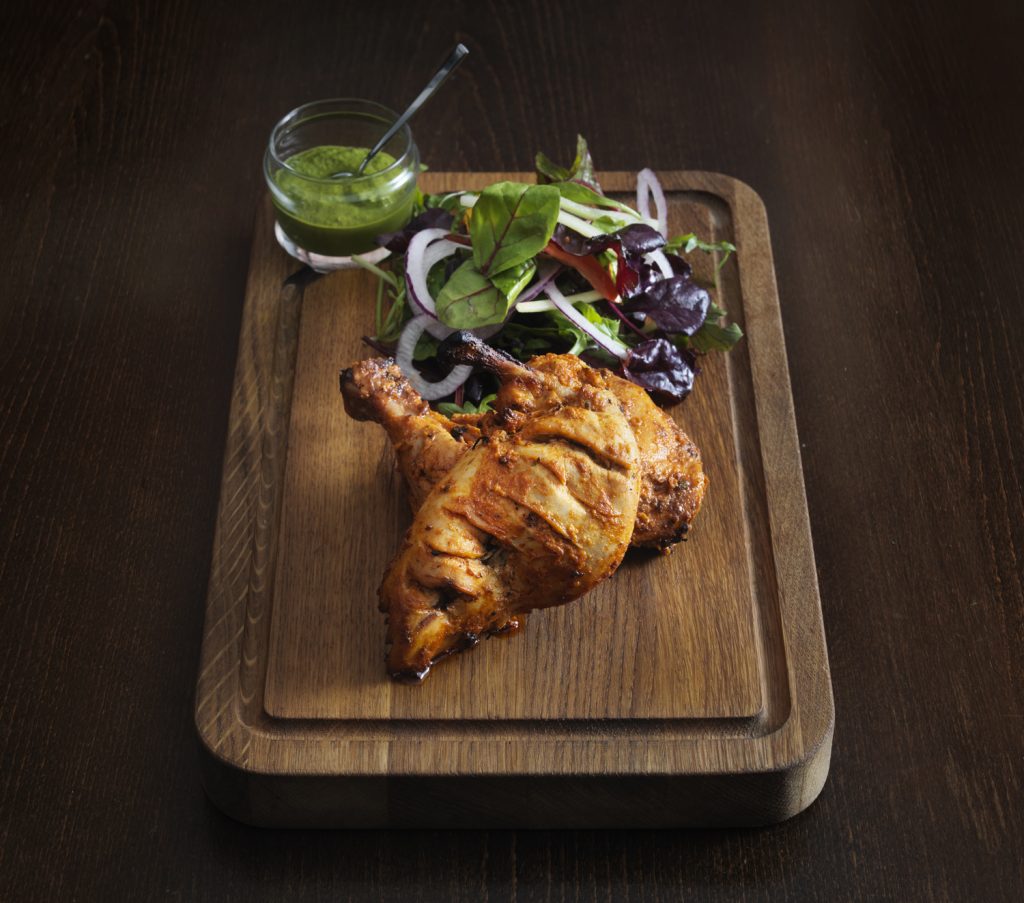 Marlow is full of gastronomic delights. Vaasu is the brand new Indian restaurant from twice Michelin starred chef Atul Kochhar, opening on 10 July. Vaasu will stay true to Atul’s passion for gastronomical discovery inspired by his travels across India. At Vaasu, it is all about North Indian cuisine which uses spices delicately along those key flavours that define the region like yoghurt, onions, tomatoes and garlic. 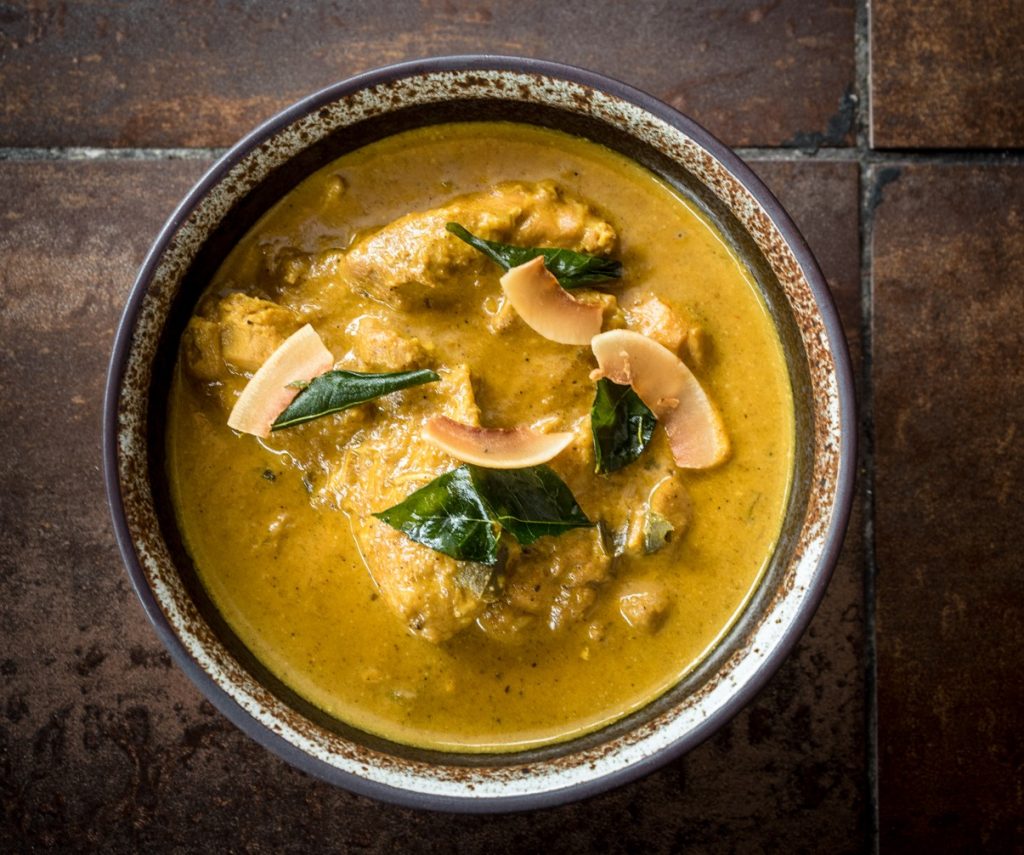 Our favourite picks: There are some really inventive dishes we haven’t seen anywhere like Atul’s chicken tikka pie with mash and berry chutney. Staying with chicken, a chicken tikka dish was marinated in tangy rich Somerset cheddar, cream and basil. For mains, large tiger prawns were delicately spiced with caraway. Atul’s mum’s recipe of black lentils and the paneer & vegetable dumplings are also a must order. We like that sides can also be ordered as mains. Finish off with a mango and yoghurt mousse from Bengal.

How to order: Order online at vaasurestaurant.co.uk. Delivery charge is £4 within a 5 mile radius. Collection also available. 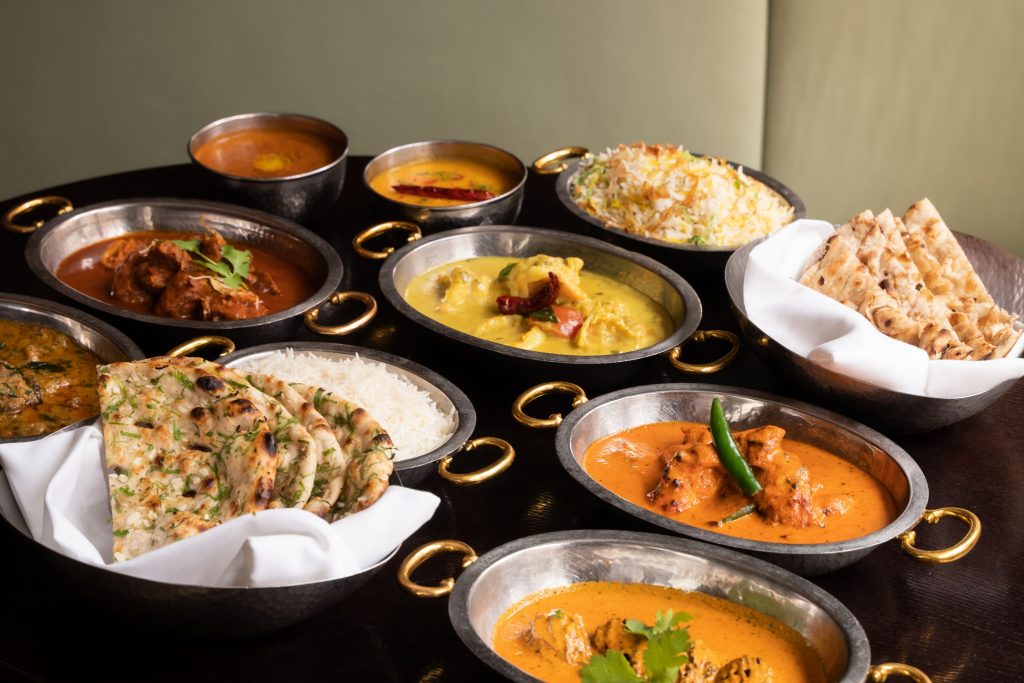 The Royal Kitchen menu is very much fit for royalty, showcasing dishes found in the stately kitchens of Northern India and the coastal cuisine from the Southern states. The centrepiece of The Royal Kitchen is their Celebration Menu – a five course menu designed for group feasting featuring a selection of their signature dishes available with an optional cocktail pairing apt for hosting a leisurely and intimate dinner at home. 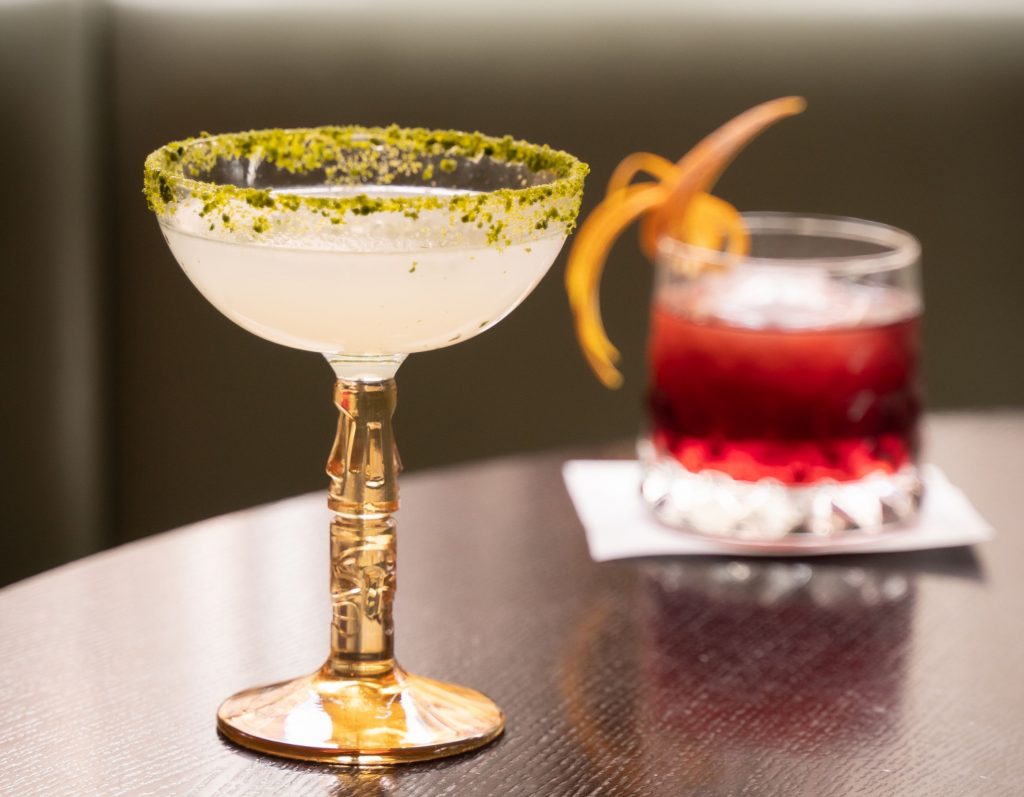 Our favourite picks: The Adraki lamb chops were spiced delicately and were SO big and SO tender, grilled in their Tandoor oven. If you love biryanis, try their Hampshire lamb creation. On the side, Saag Paneer and the Jamavar Dal had a royal seal of approval too. It doesn’t stop there. For dessert, Gajrela is a stunning Indian carrot cake made with heritage carrot, milk, clotted cream and pistachio. There are also some really clever bespoke cocktails. Our favourite was a Sea Mist made with Gin Mare, rosemary, green olives, Abbott’s bitter & tonic.

How to order: jamavarrestaurants.com Delivery across all of London AND within the M25. Full delivery postcodes online. 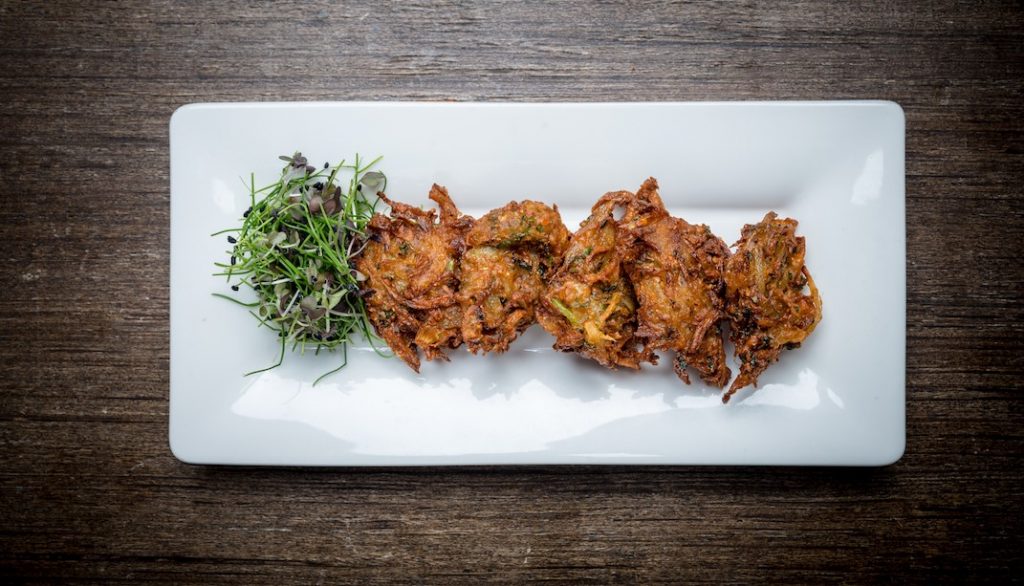 From a royal kitchen to celebrity chef Cyrus Todiwala OBE DL, who cooked an Indian version of the British classic shepherd’s pie for the Queen and the Duke of Edinburgh as the royal couple started their Diamond Jubilee tour.

Some of the most popular dishes are on the menu including a signature Parsee lamb, chicken tikka, Goan pork vindaloo and vegetable curries. Café Spice Namaste are big on sustainability and supporting endangered species, like the British Lop Pig. Most of the ingredients on the menu are supplied by local farmers including lamb from Lord Newborough’s Rhug Estate and Carroll’s Heritage potatoes.  As well as the traditional takeaway/delivery, Cyrus is also preparing chilled/frozen meals for you to enjoy at home all week. 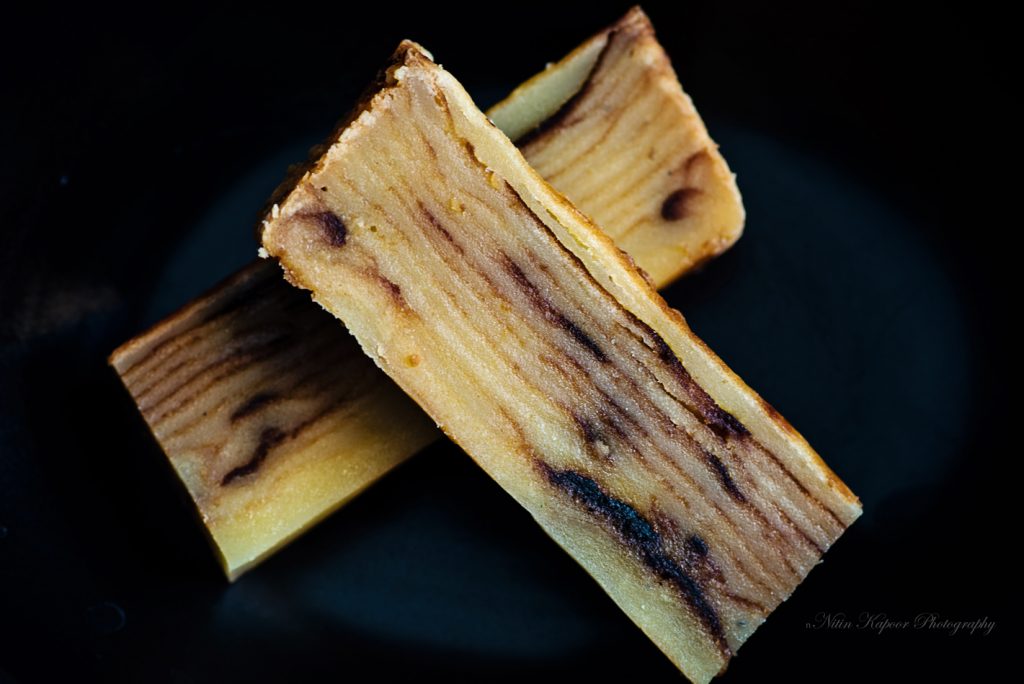 Our favourite picks: There are some really interesting one off dishes including a Goan prawn dumpling curry with minced prawn dumplings. A pork vindaloo was just as a vindaloo should be – Not as hot & spicy as the belief goes this is the original from East India which takes seven days to prepare from the soaking of the spices. Our other favourite was a chilli, cheese and garlic naan with all the best things in life in one bite. For dessert, it was our first time trying Bibinca, a multi-tiered coconut pancake infused with nutmeg and vanilla. Don’t forget Mr. Todiwala’s IPA.

How to order: cafespice.co.uk Delivery is within 5 miles of the restaurant. Collection also available. 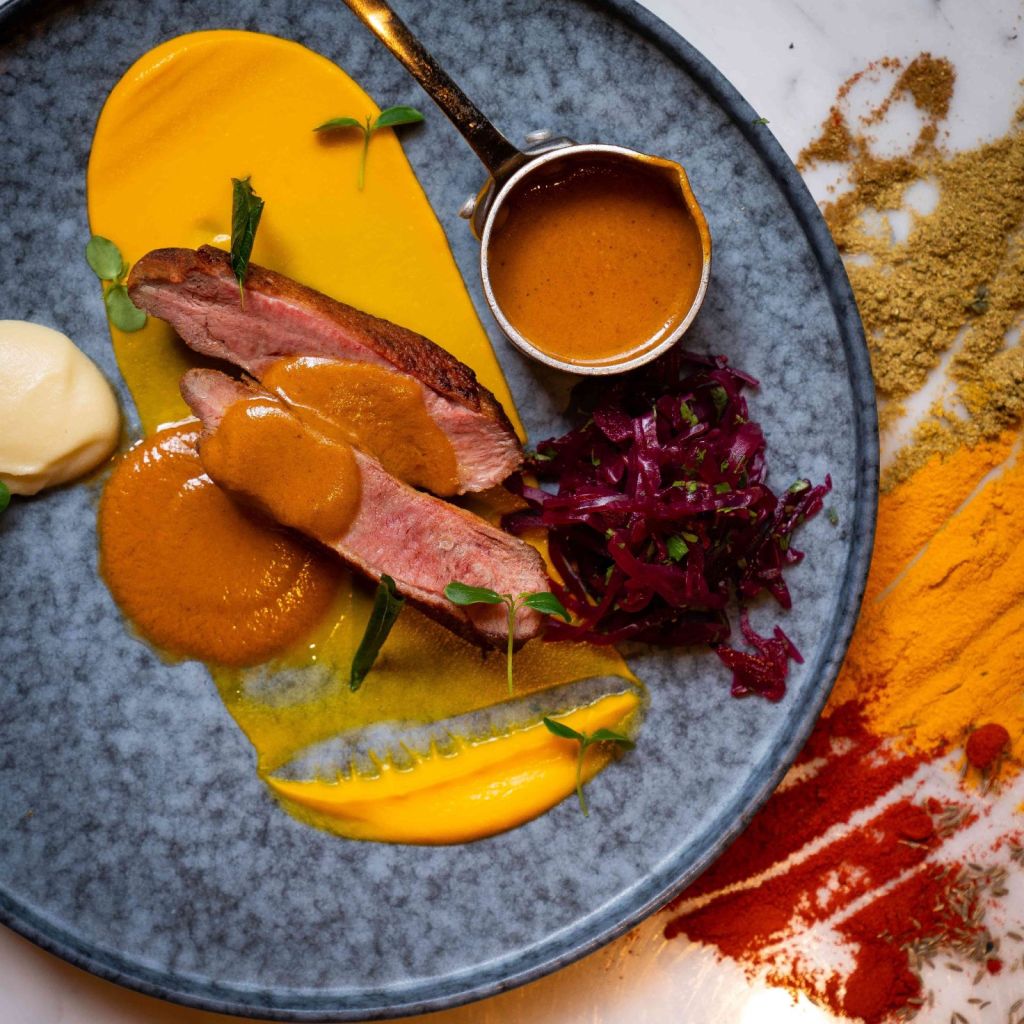 This restaurant on Haymarket is one of our favourites. Not only do they excel at Indian cookery but their cocktails are also world class. The menu at Farzi Café London is really clever with a hint of British familiarity. There are of course Indian dishes and global classics, with traditional British favourites also enjoying an Indian twist.

Our favourite picks: There are some signatures that need to be ordered like the quail and chicken kebabs as well as those addictive flame grilled lamb chops. For main course, their C.T.M (Chicken Tikka Masala) is a clever take on that British invention and it also comes with a cheesy Cornish Cruncher naan. On the drinks side, an Indian Old Fashioned is also a must try if you like your drinks short and strong.

How to order: farzilondon.com Delivery is available through Supper, Deliveroo and Uber Eats. 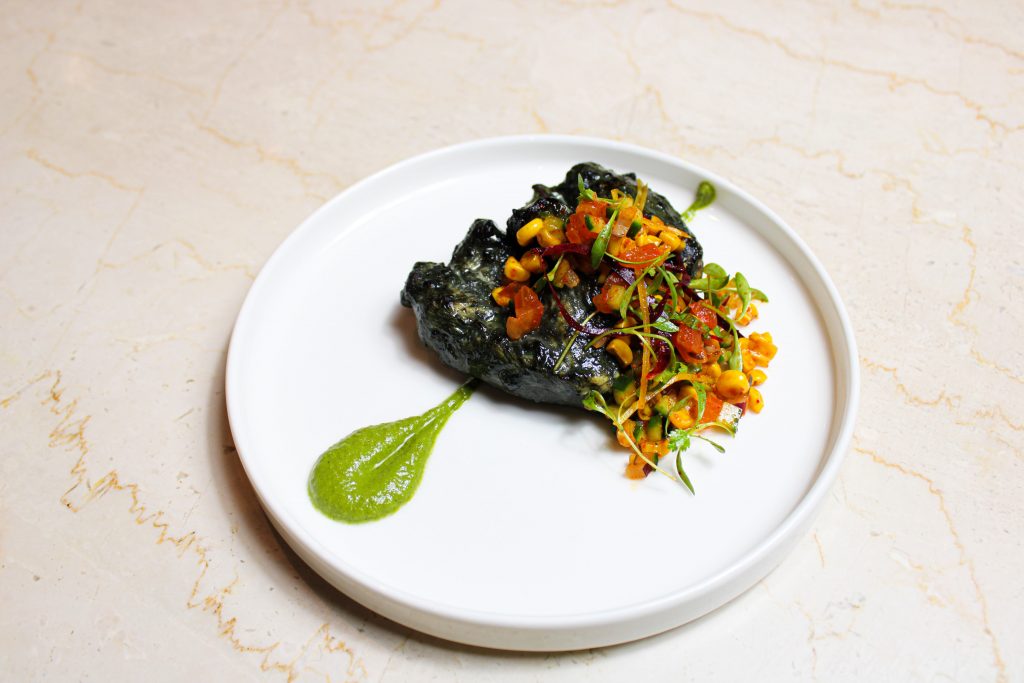 The contemporary Indian restaurant by Peter Joseph, Kahani, will now deliver classic Indian recipes made with fresh organic British ingredients. Kahani, which means story in Hindi, has a fresh approach to Indian cuisine. The food Peter prepares at Kahani is packed with flavour and use his signature blend of spices and flavour pairings. 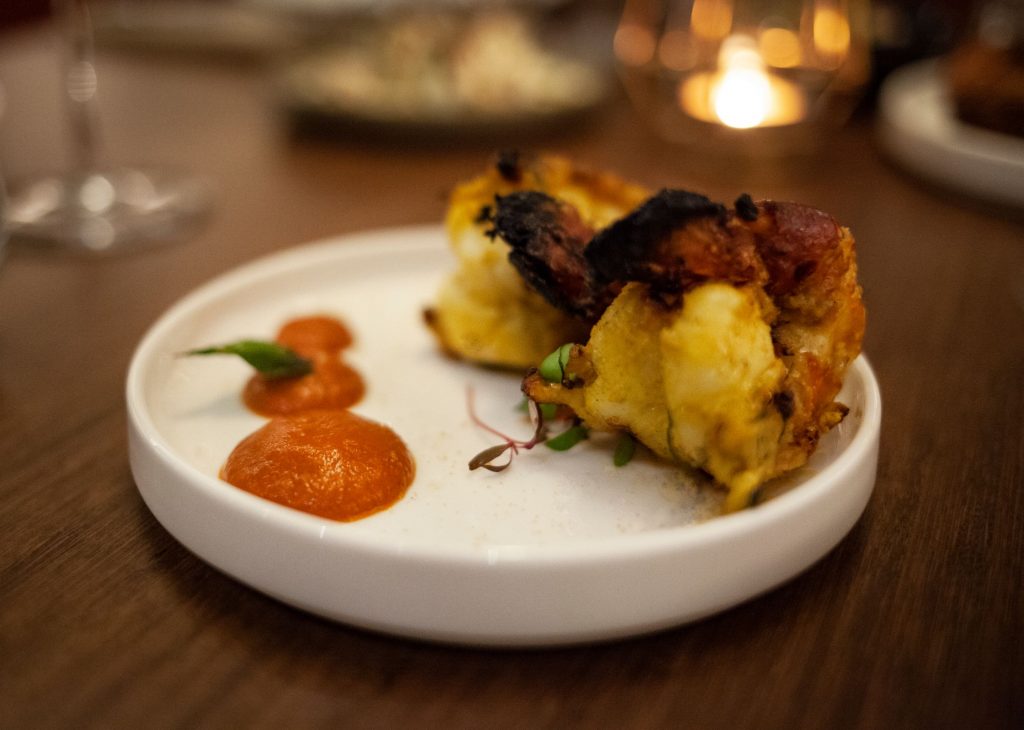 Our favourite picks: Giant Malabar prawns were so fresh and meaty. The black chicken was a real one off dish with Chetinaad roasted spice and curry leaves. Think black popcorn chicken with amazing Indian spices. If you like samosas, the samosa platter is a must order. A Kerala fish curry featured tender halibut simmered with shallots, turmeric, tamarind and coconut.

How to order: Deliveroo / Supper.London for delivery. Collection also available from kahanilondon.com 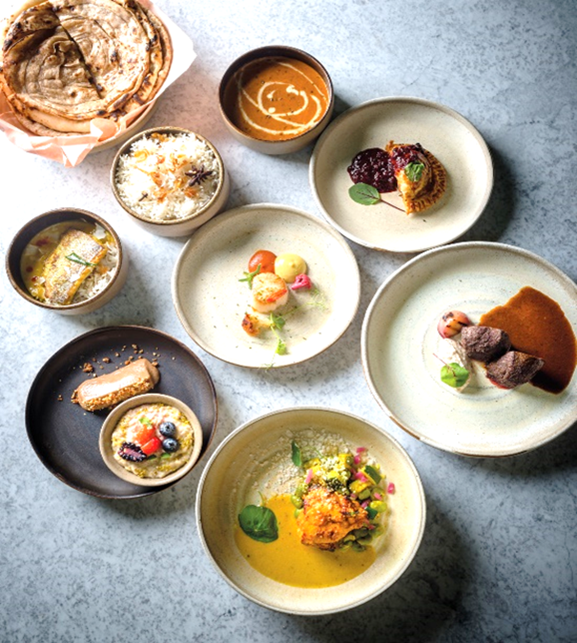 The first Indian chef to win a Michelin star, Atul Kochar has done a lot to elucidate and elevate Indian cuisine in the UK. Having previously helmed the much-lauded Tamarind and Benares Indian restaurants in London, his latest venture Kanishka now offers delivery. What arrived was the perfect combination of indulgence that one looks for in an Indian takeaway and the quality of ingredients and deft sophisticated touch that a chef of Kochar’s standing would deliver. 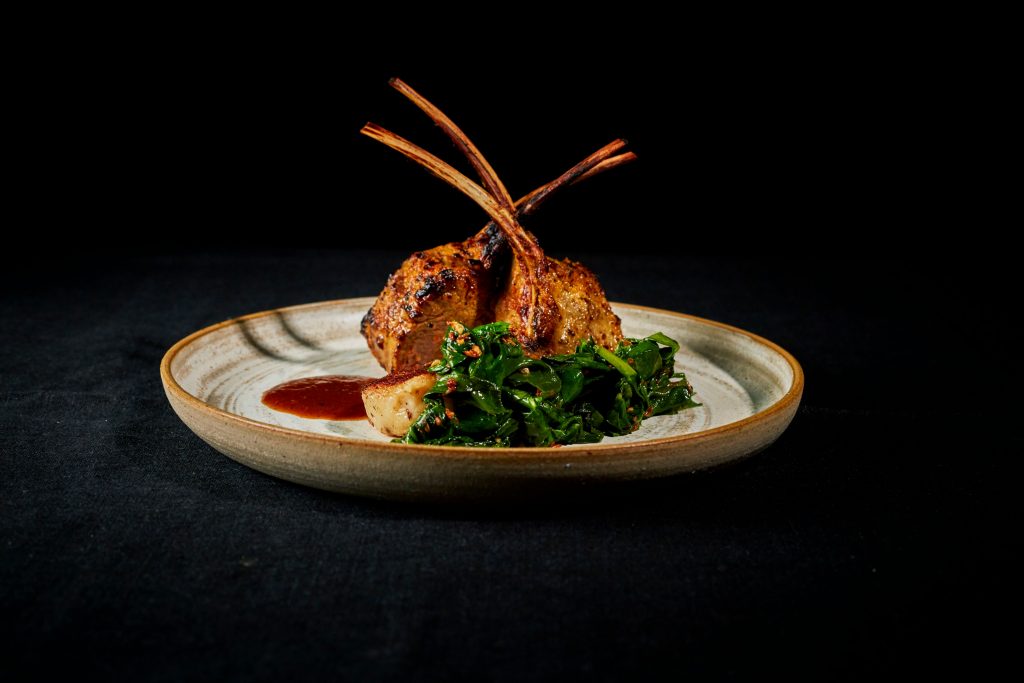 Our favourite picks: Kanishka offers the lesser known cooking of North Eastern India, so our order was a roll call of the traditional classics. Perfectly crisp vegetable Samosas came with a trio of well-made dipping sauces, spicy, cooling and sweet to start. Butter chicken, so often made with cheap chicken in a neon sauce was here a deep rich red with huge and tender pieces of superior poultry. Another favourite, Lamb Roganjosh had similar qualities, with flavourful meat and the scent of saffron coming through. Described as a signature dish, the Black Daal was a revelation, heady with scent and spice yet creamy and soothing at the same time.

How to order: kanishkarestaurant.co.uk Delivery is available across Greater London (within the M25) through via their private delivery service and also through Deliveroo, Just-Eat, Supper and Uber Eats. Collection also available. 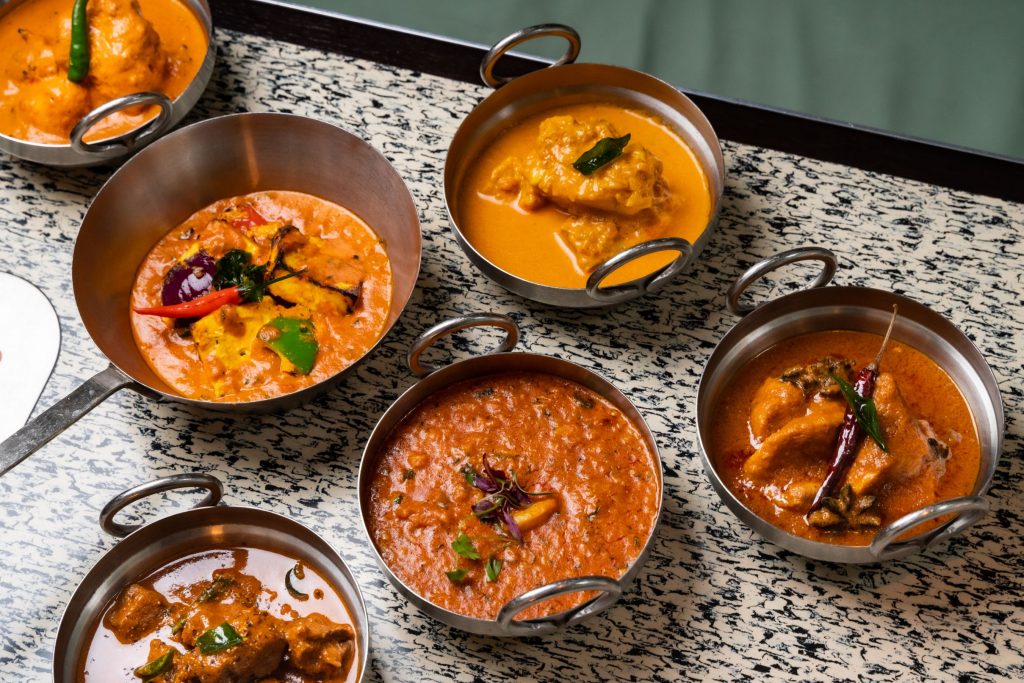 Inspired by the tiffin tin carriers, the institution of men who use Mumbai’s famed local railway and bicycles to deliver home cooked meals across the city, their new delivery menu crafted by Executive Chef Surender Mohan pays homage to the flavours and culture of bustling Mumbai.

In light of the crisis, the dabbawalas were unable to work with the city coming to a standstill so Bombay Bustle will donate a percentage of sales to The Nutan Mumbai Tiffinbox Suppliers Charity Trust, the official Dabbawala association. 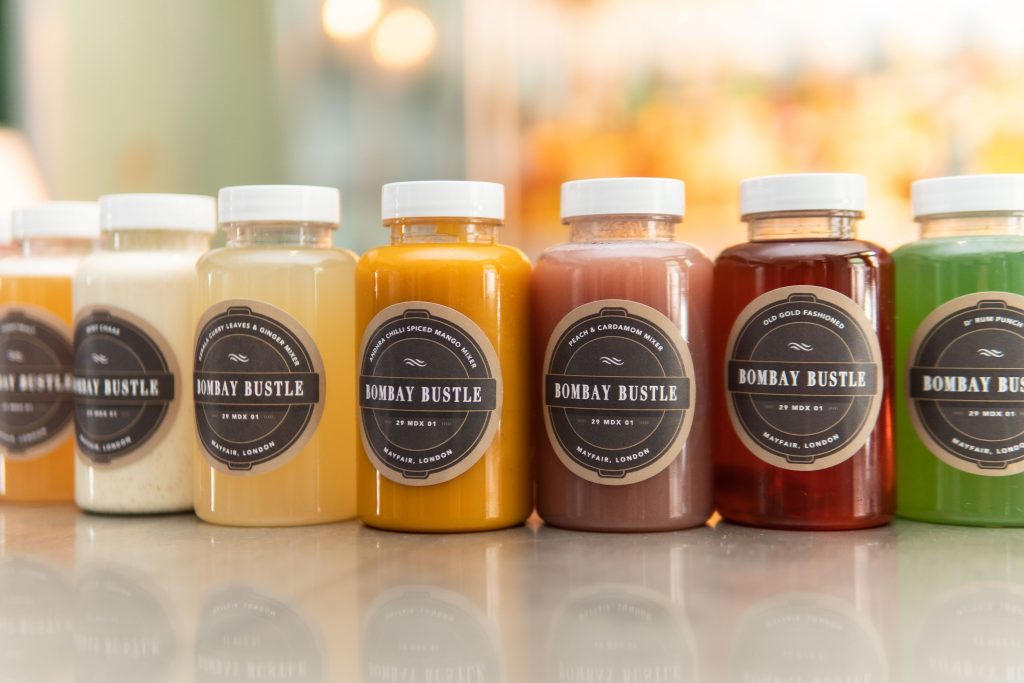 Our favourite picks: Malabar chicken wings and a new trio of samosas with fillings of Adipoli beef, duck Chettinad and aloo masala were ideal starters along with a tandoori chicken for two for main. If you are a paneer lover, the paneer tikka masala is a must order. There are some great cocktails too like a Honeymalt with Islay single malt scotch, ginger liqueur, honey, lemon juice.

How to order: bombaybustle.com Delivery across all of London AND within the M25. Full delivery postcodes online. 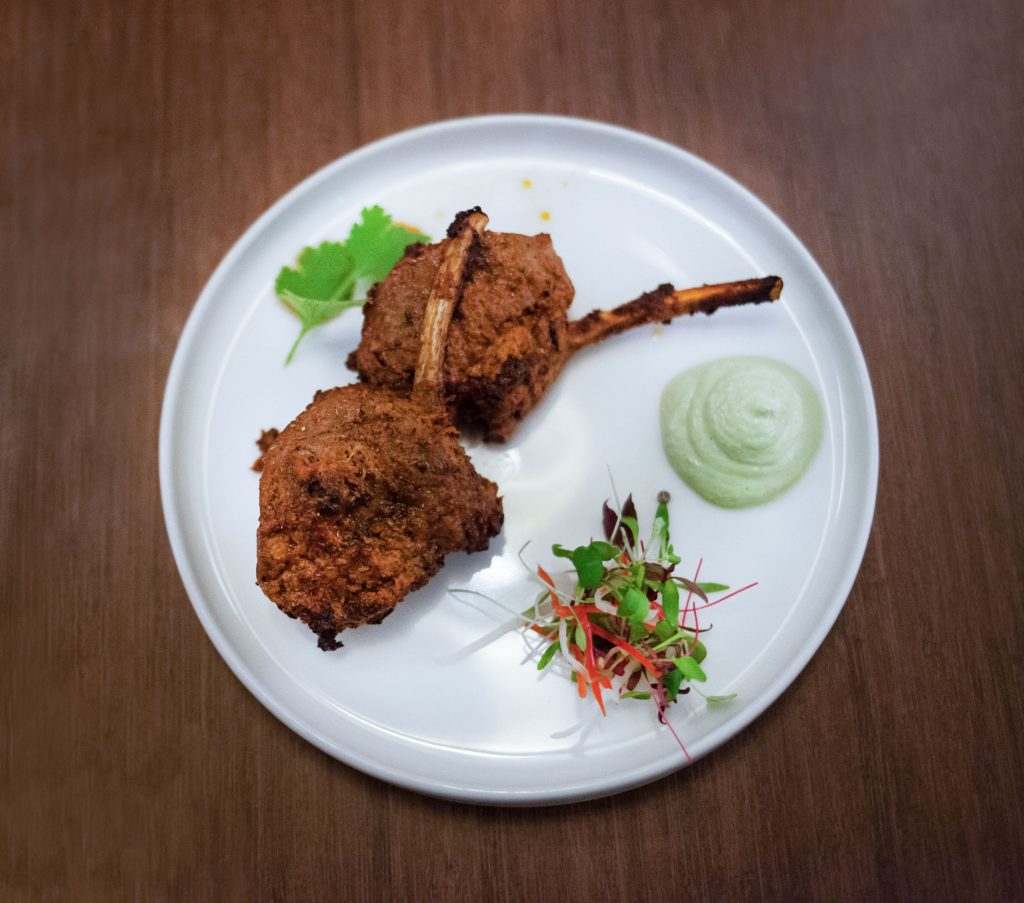