Few playwrights have been watched so closely as The West End’s new poster girl Jasmine Lee-Jones since her cacophonous debut, The Seven Methods of Killing Kylie Jenner first turned heads in 2019. Her second play, Curious, is pared-back, more vulnerable – a one-woman reflection on black identity and whitewashing in the arts. Premiering at Soho Theatre, Jasmine Lee-Jones stars as ‘Jaz’, a black drama student exasperated by her teachers’ proclivity for period drama. 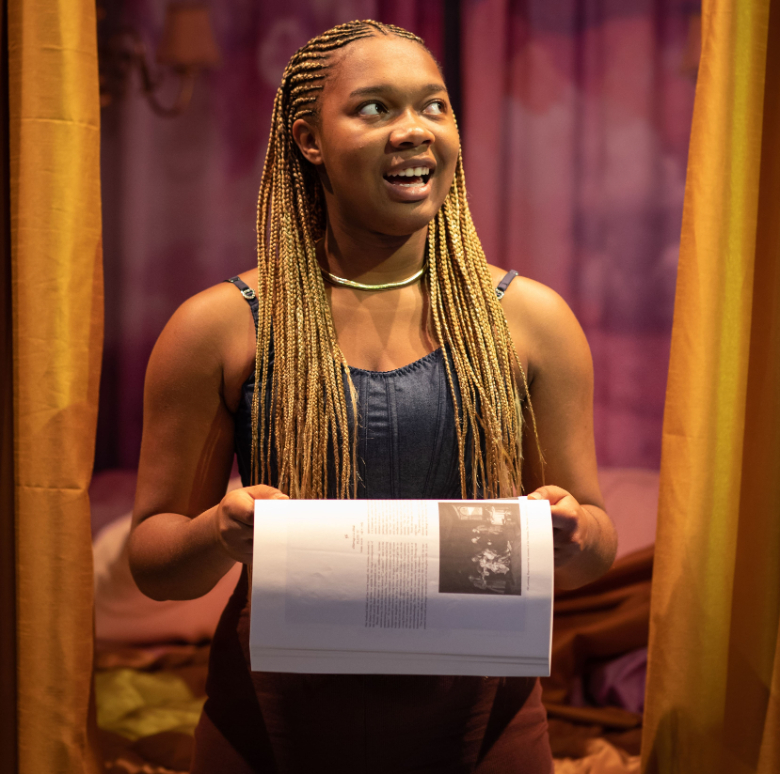 A recent casting has brought Jaz to the end of her tether. In their latest Restoration play, she’s splitting four lines with the only other black girl in her class, with whom she has been jointly assigned the servant role. Finding herself a wallflower in a scene worlds away, Jaz hunts for 18th century figures she can resonate with. When came the black creatives? Some archive-digging reveals the tale of one Celia Edlyne, a runaway slave turned actress and lesbian lover of the local gentry. Following a breadcrumb trail of diaries, paintings and theatre programmes, Jaz charts Celia’s story with fascination as the parallels with her own life begin to mount. 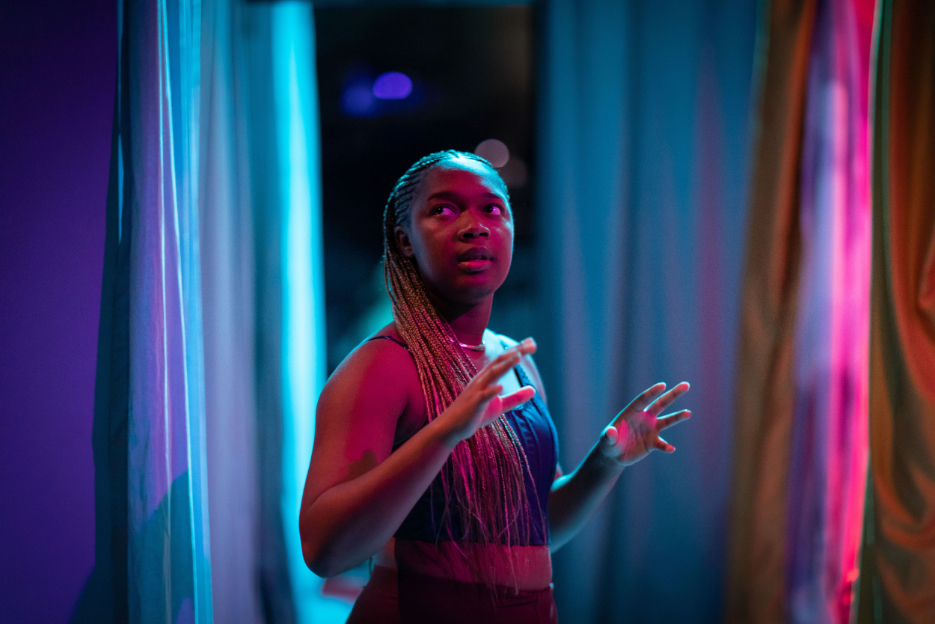 A master of language, Lee-Jones spins poetry from night buses, queer raves and shoplifting in Topshop. As she shapeshifts between characters, she revels in the peculiarities of modern communication – WhatsApp tones echo the theatre and a disappearing typing ellipsis says more than the monosyllabic love interest can ever muster. Different spaces magnify the interconnection between language and identity – Jaz and her best friend share a dialect of in-jokes, trigger points and personal history, whilst at Drama school she self-censors her London slang in effort to blend in. In a play where every character has a façade, Celia acts as a singular beacon of calm, her honeyed interludes sharpening Jaz’s goofy self-consciousness. 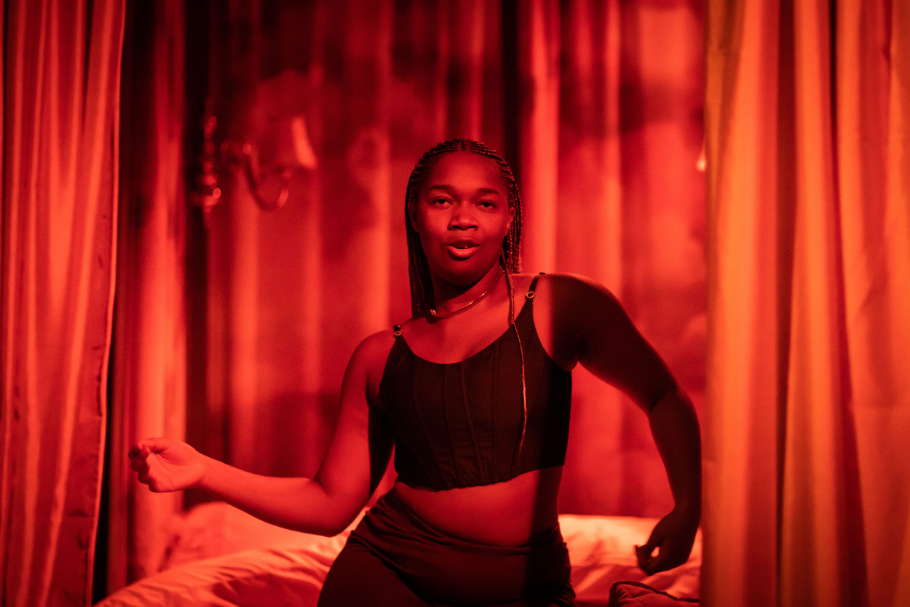 Curious paints an unflinching picture of Britain’s lingering racism, challenging everything from common microaggressions to the very concept of ‘classic’ literature. As lead whistle-blower, Jaz avoids self-righteousness by constantly questioning her own actions – “can I say that?” “is this immoral?”. Much like in Seven Methods, audience members feel extremely seen – it’s almost as if Lee-Jones makes a point of eye contact with every viewer. The message of introspection is clear, if not crudely hammered home by the large mirror presented to the protagonist and her crowd when her character is questioned. 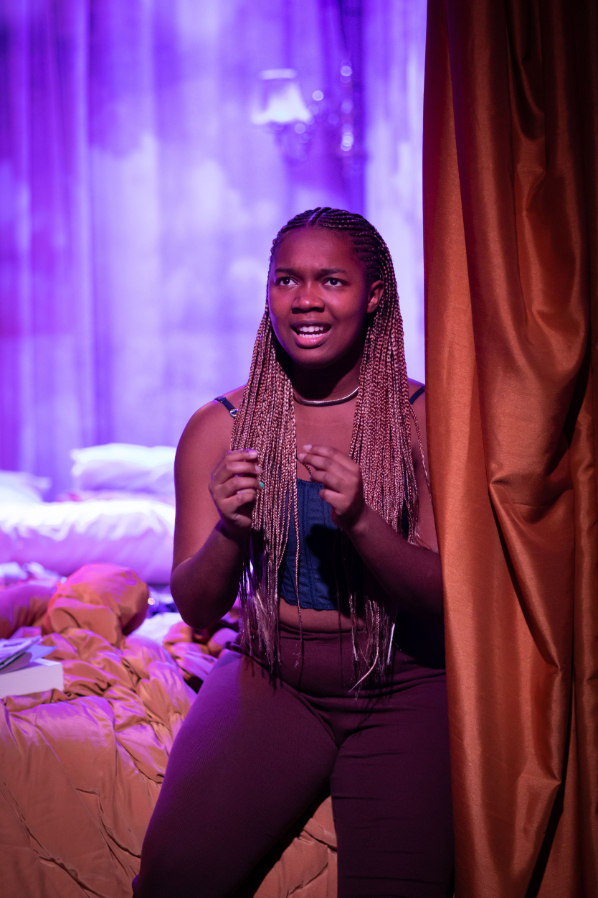 Born from a final-year drama school project, Curious maintains its rough edges. Curtains draw back to reveal a makeshift disabled loo, and disembodied arms gift new clues from the wings. The playful staging brings a lightness to the subject matter, and there are titters from the North London crowd as Croydon is parodied as the city’s Deep South – a foreign land doused in sunset hues.

The play loses some momentum in its final scenes, but the closing twist brings it new depth. Funny, off-kilter and devastatingly perceptive, Jasmine Lee-Jones is eminently watchable, flexing her muscles here as both a writer and performer. Curious reaffirms her status as a playwright to watch, though one leaves with the impression she’s just warming up.

All imagery courtesy of Helen Maybanks