A track day at Silverstone with Ginetta Cars

Why did I bother setting my alarm this morning? I have been awake for most of the night, too excited at the prospect of my day with Ginetta Cars, driving a Ginetta G55 GTA on the hallowed circuit of Silverstone, the home of British Motor racing.

Ginetta wasn’t a name I was familiar with. I initially thought the brand had an Italian influence but it is actually one of the leading British racing car manufacturers and was founded over 60 years ago by the Walklett brothers. The four brothers first modified a Wolseley Hornet and then later went on to produce hand-built road and race cars. With its coveted history and reputation the company was acquired by Lawrence Tomlinson, a successful businessman and racing driver in 2005. The cars are manufactured and developed proudly in Yorkshire and Ginetta continue to go from strength to strength, selling cars worldwide and training aspiring drivers. 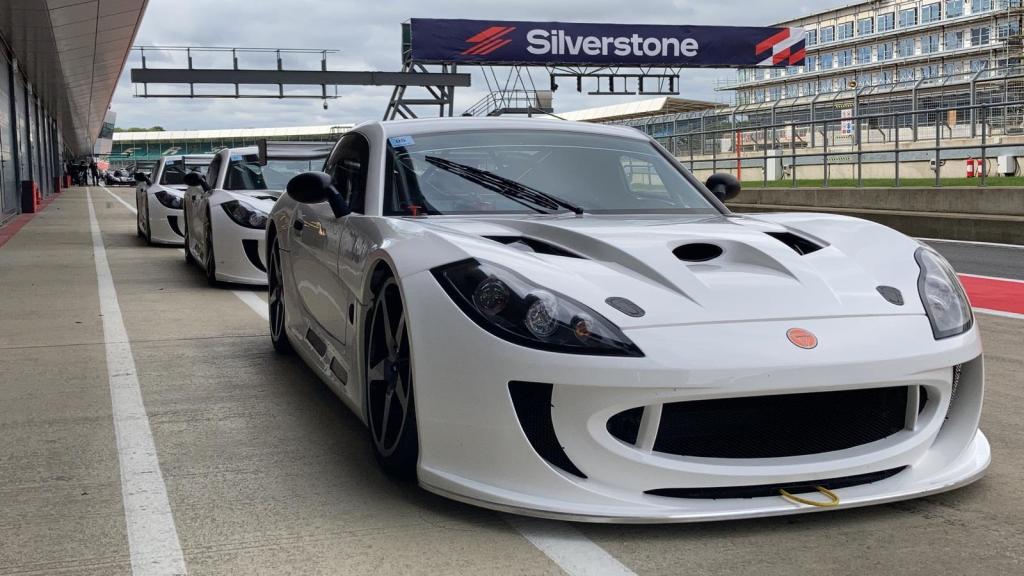 The training Ginetta provides can take a driver from their first race aged 14 into international racing stardom. One such success story of training talented drivers through the ranks of motor racing can be seen in Lando Norris. As a former Ginetta driver, Norris is now a Formula 1 driver who is racing for the McLaren team.

Silverstone is not only the UK’s Formula 1 circuit, but it also has the longest track in the country and is considered to be one of the most demanding circuits to drive. I was given a head sock and some assistance in choosing my racing helmet before meeting Chris, my driving instructor for the morning. It’s interesting speaking with Chris who tells me that he got the racing bug a few years ago; having had a background in IT, he was looking for a new challenge to replace the thrill of having to run his own business. Chris’s background may not seem like your typical racing driver or instructor profile; however, being business savvy helps in this industry, particularly when you have a number of sponsors behind you that allow you to pursue your passion. Increasingly, most Ginetta drivers like Chris are typically former business owners that share a passion for cars and the constant hunger for adrenaline. 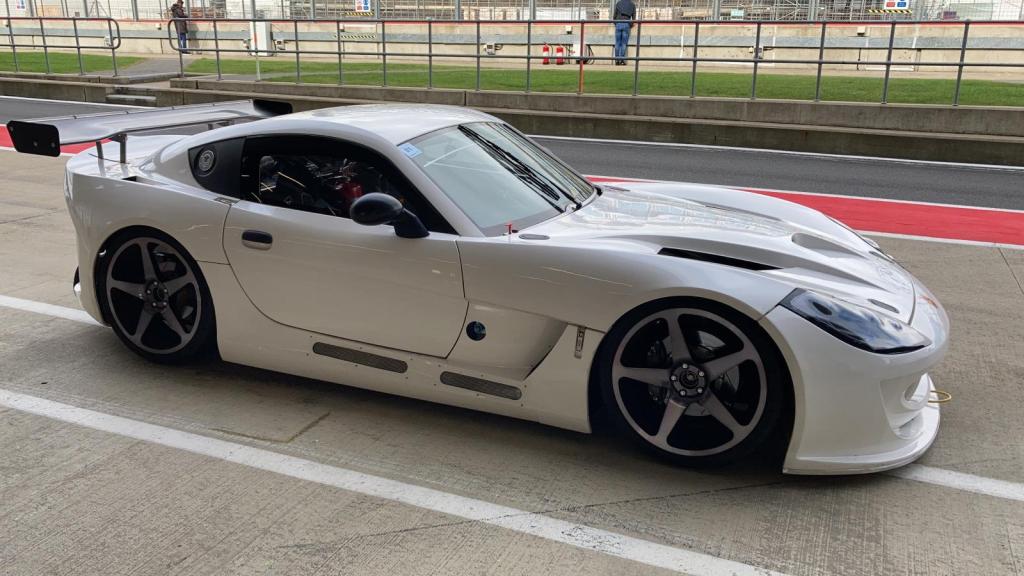 The pit lane being next to the racetrack was a noisy place. I realised very quickly that there was no point shouting when the Ginetta G58 and LMPS prototype cars whizzed by at tremendous speed and with a reassuringly deafening sound. Both models are used for the 24 Hours of Le Mans race. There were several white polished Ginetta G55 cars all lined up, glistening in the mid-morning sunshine, ready to be driven.

Chris and I discussed any track experience I had and he took me through the four basic hand signals: change gears up, down, break and accelerate that he would use to guide me through the circuit. I mused that a fifth hand gesture for ‘pray’ would have also been useful. 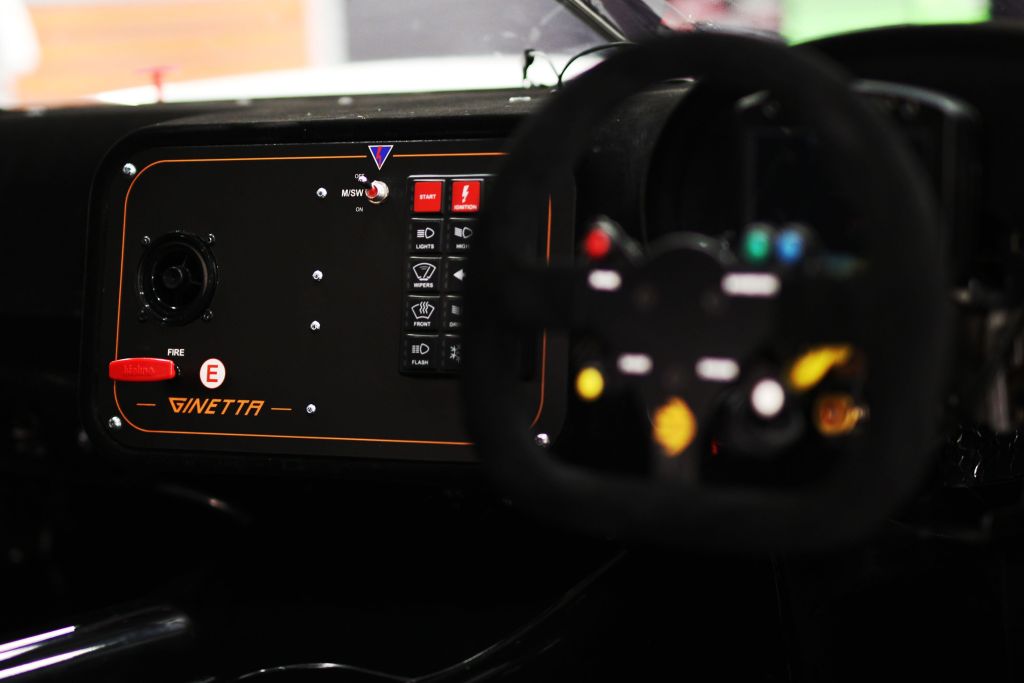 We sat inside the car and the Ginetta team members helped to strap us safely into the low bucket seats. Inside the car, there was a dashboard was a series of buttons and an on and off ignition switch along with the sport steering column with finger paddles for gears. The car is fully equipped with all the modern electronics one could wish for to give you the essential information to help you drive the car to its maximum potential. The air conditioning was also very welcome indeed, especially with a head sock and helmet on. 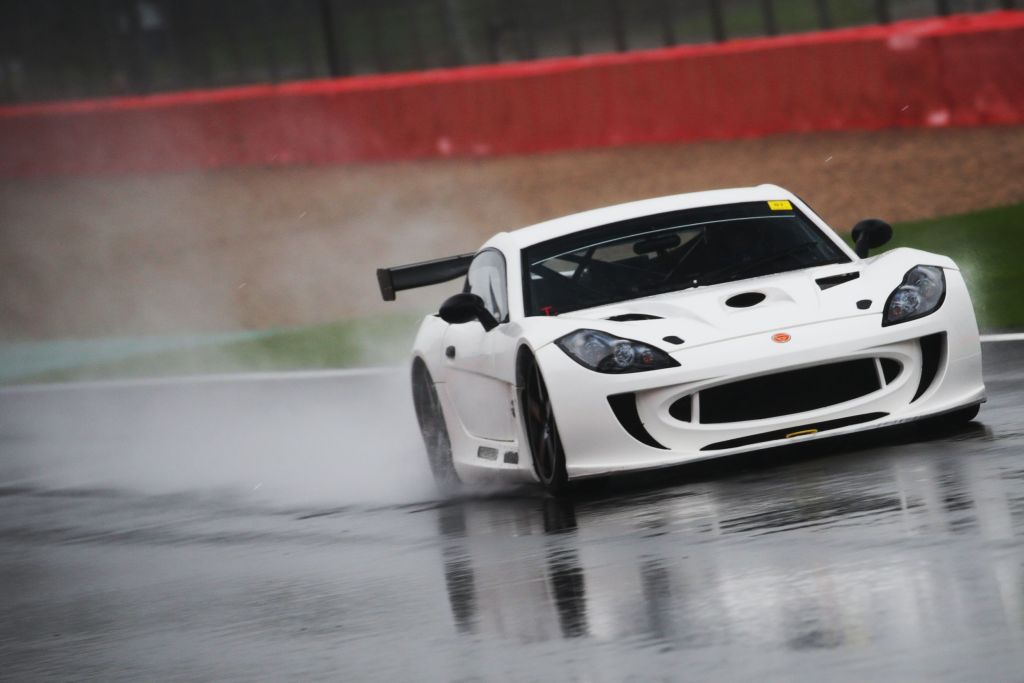 The engine fires up when you place your foot on the accelerator. A roar from the engine, an audible confirmation that the car with its 3.7 litre engine is ready to be put through its paces. Chris initially takes me around the track, highlighting areas where there are tight hairpin corners to contend with as well as long straights where one can really test the GTA to its limit, feeling the acceleration and overwhelming power of the 380 BHP engine. Chris pulls into the pit lane and we swap seats.

Now fully strapped firmly, yet comfortably in the driver’s seat, I pull away from the pitlane. As I accelerate, it takes a brief period getting accustomed to the paddle gears, but they were extremely responsive once I had got the hang of them, particularly when having to shift down several gears when approaching a sharp bend as well as moving up the gears with plenty of clear track ahead of you. Fortunately, there were only a few cars on the track to distract me from driving, which I would recommend to anyone looking to experience racing for the first time. 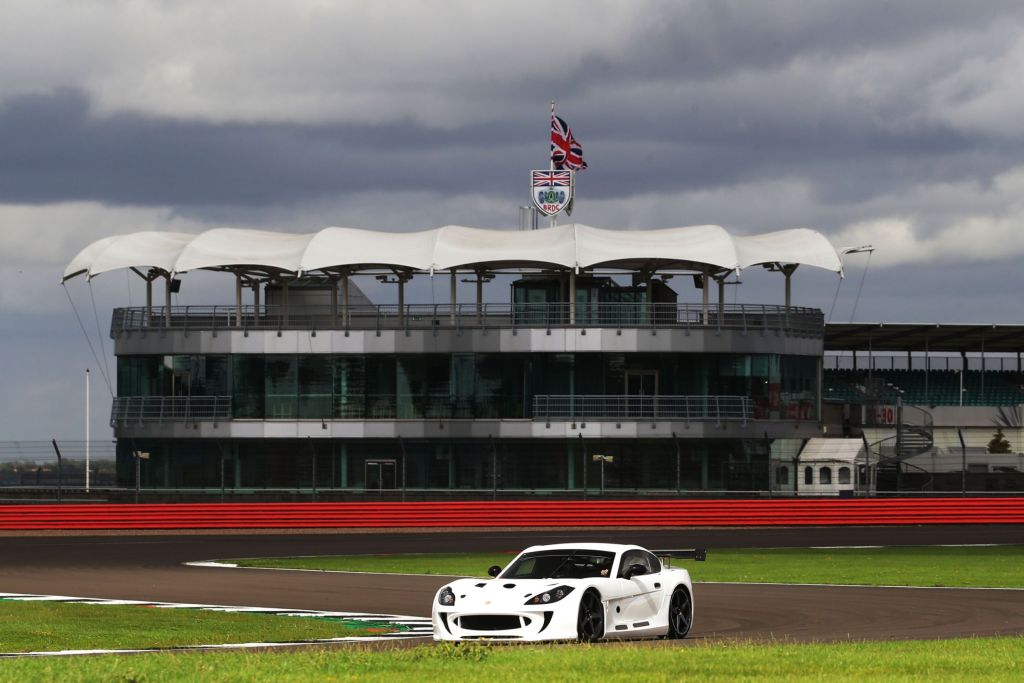 With my heart in my mouth, the sheer acceleration was thrilling and the way in which the car stuck like glue to the tight corners was very impressive to experience. Racing underneath a large banner displaying ‘SILVERSTONE’ did make me feel rather proud and privileged, considering the countless drivers that have experienced the same vantage point including the legendary Sir Stirling Moss. Interestingly, his first Silverstone Grand Prix was in 1950, the same decade Bob, Douglas, Ivor and Trevers Walklett were racing their classic G4.

The G4 is where it all started according to Matt Lowe, Chief Executive of LNT Group. He’s very excited about where the company is at the moment. The range of Ginetta cars are selling well, including a modern version of the classic G4 and the supercar Akula. Other models are being developed; having Tomlinson as not only the owner of Ginetta, but someone who understands the engineering behind the cars, enables the development to be more efficient. He also suggests that electric powered racing is where the future of motor racing is and manufacturers like Ginetta have to now seriously consider this. We also talk about the Academy, which allows anyone with a passion to race their cars the ability to attend track days anywhere in the UK.

The GTA is currently being approved for road use. Until then, I get into my car to drive back home. I instinctively search for the paddle gears, sigh and drive off.