A right honourable stay at the Hyatt Regency London – The Churchill

Our eyes appear to meet as I casually take a glance upwards; he’s looking at me with that all too familiar glint in his eyes, smoking a cigar and donning his famous Homburg hat. A large black and white canvas of a portrait of the Right Honourable Sir Winston Churchill hangs proudly behind the reception desk as I check into the Hyatt Regency London – The Churchill.

It’s been over two years since I experienced the launch of a new cocktail menu at The Churchill Bar and Terrace; the menu’s creation had been inspired by Churchill’s life, interests and passions. Based on the cocktails I sampled that evening; I concluded that it must certainly have been a colourful and fruitful life at that! Even the venue spaces attempt to narrate a particular story of the former Prime Minister be it at work or at leisure, including his passions, travels and political achievements. 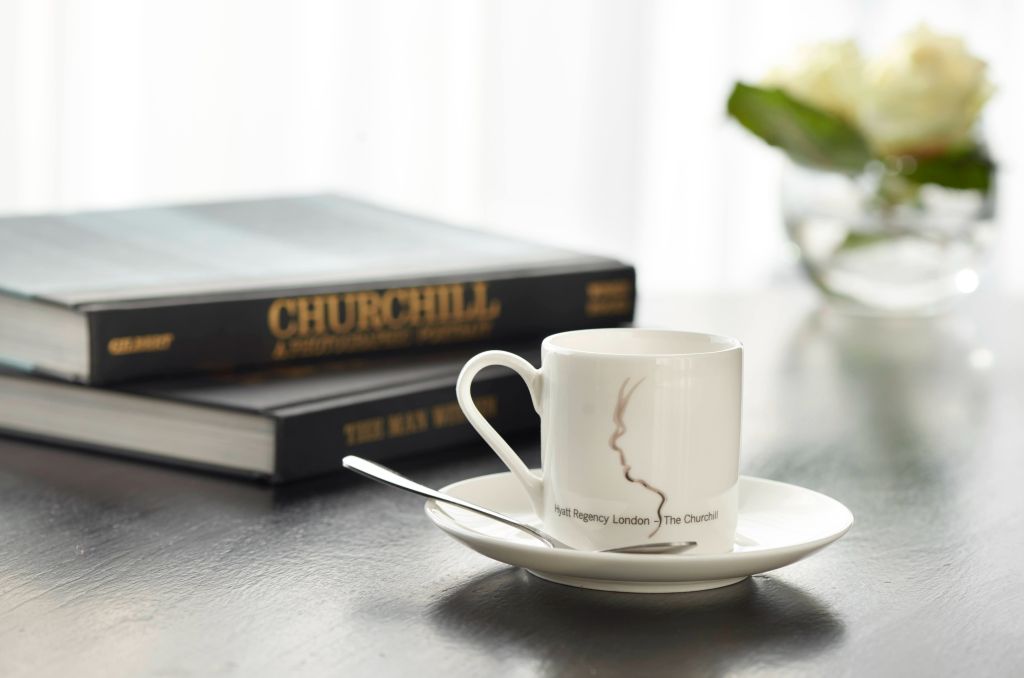 Similarly, the hotel too pays homage to the great statesman’s life and work; artworks, including sculptures, drawings, photographs and original works by Churchill himself are sympathetically presented throughout the lobby, bar and event spaces. There are also handwritten love letters between Churchill and his wife Clementine that can be found in the bar that provides an intimate insight into the couple’s relationship. You can also see his influences through the classic British style and décor in the guest rooms. The newly designed interiors were undertaken by Bowler James Brindley and the artworks have been curated by the Churchill Heritage and Catherine and Randolph Churchill, the great grandson of Churchill.

What better way to start the weekend than with a stylish, yet statesman-like staycation in the heart of London’s West End. The hotel is conveniently located in Marylebone, which is a short hop and a skip away from Marble Arch London Underground station, while Bond Street and Baker Street stations are both nearby. London Paddington is a short taxi ride away and will connect you to both the Heathrow Express as well as London Underground. Selfridges on Oxford Street and the many boutiques of Bond Street together with The Wallace Collection, Wellcome Collection and Madam Tussauds are all a stroll away. 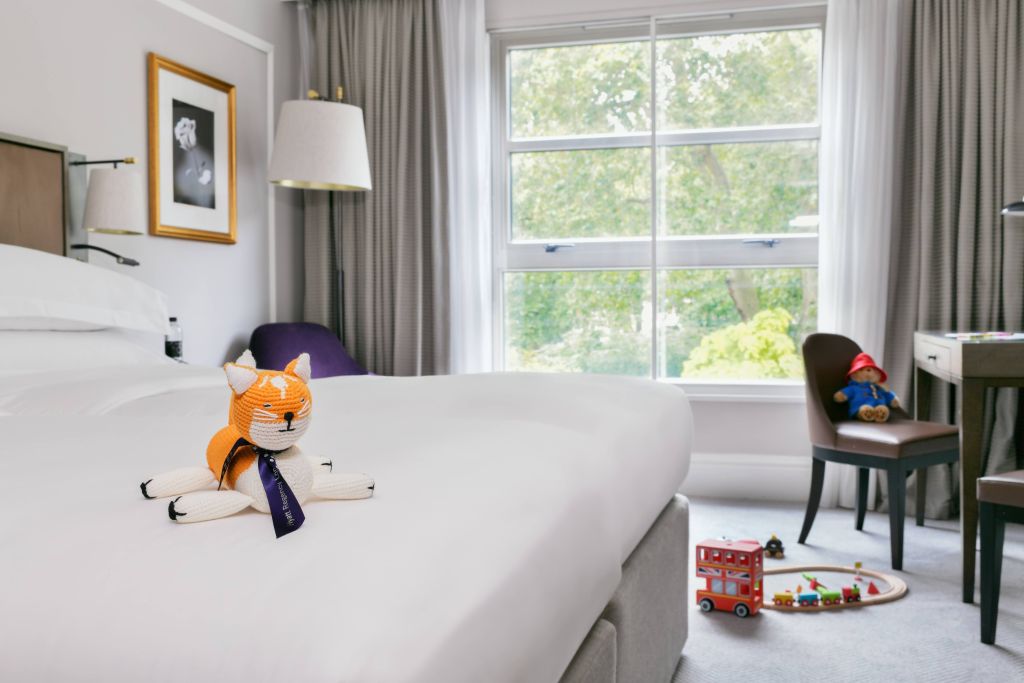 This room category provides a modest 23 sqm room but it comes with a large Queen-size bed and views over the leafy gardens of Portman Square. The contemporary designed room has a working desk and modern bathroom, complete with a walk-in rain shower. If you would rather prefer a bath to soak in, then simply mention at the time of booking. Experience and marvel at the revolutionary Japanese electronic bidet with its range of water sprays and seat warming options as well as a large condensation-free mirror both of which have had me rethink my bathroom design at home. The bathroom comes complete with an extensive range of luxury toiletries by Molton Brown.

There are also subtle touches to the bedroom such as a fresh bouquet of white flowers in a glass vase that’s placed neatly on a sideboard that matches the modern white décor of the room or the bespoke herringbone grey bed throw. A small hand-knitted ginger cat with a distinctive purple collar greets you as it sits handsomely on the large bed. This surprise room companion is called Jock; since Chartwell, the former home of Churchill was opened by the National Trust to the public in 1966, the family requested that there should always be a marmalade cat with a white bib and four white socks named ‘Jock’ residing at the house due to Churchill’s fondness of cats. Even those with allergies will warm to the new feline friend. 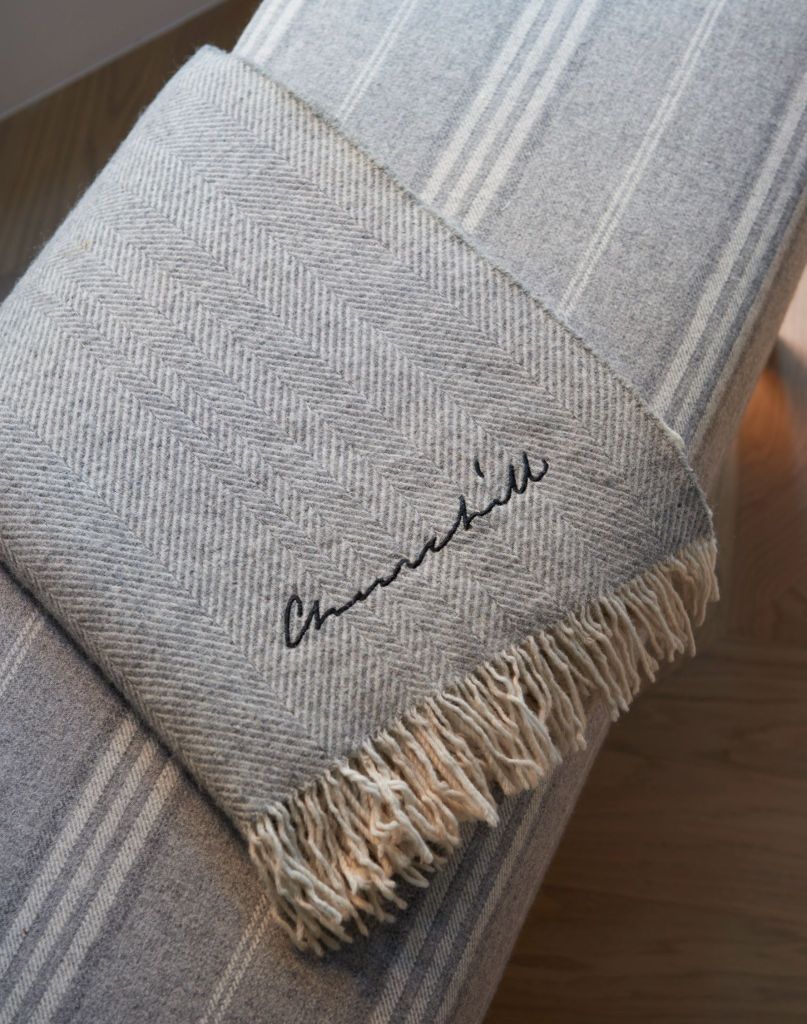 Guests can enjoy exclusive access to the Portman Square Garden tennis court by contacting the concierge. If tennis is rained off or you still have some energy left then there is also a 24-hour fitness centre with state-of-the-art equipment, including cross-trainers, bikes and treadmills. If all that exercise has taken its toll, then head to the treatment room on the second floor for a choice of relaxing treatments and massages.

Our room comes with access to the beautifully designed Regency Club lounge, which is located on the 8th floor. Being a Regency Club guest comes with its benefits such as a complimentary breakfast and a selection of warm canapés with drinks and beverages that are served between 5:30pm and 7:30pm. A delicious selection of vegetable samosas, chicken Caesar wraps, black truffles with egg and mayo and mackerel pate tartlets were available. You can also invite up to two guests to join you, which was particularly handy as a couple of friends happened to be in town celebrating their wedding anniversary and enjoyed meeting in the private club style surroundings of the lounge. 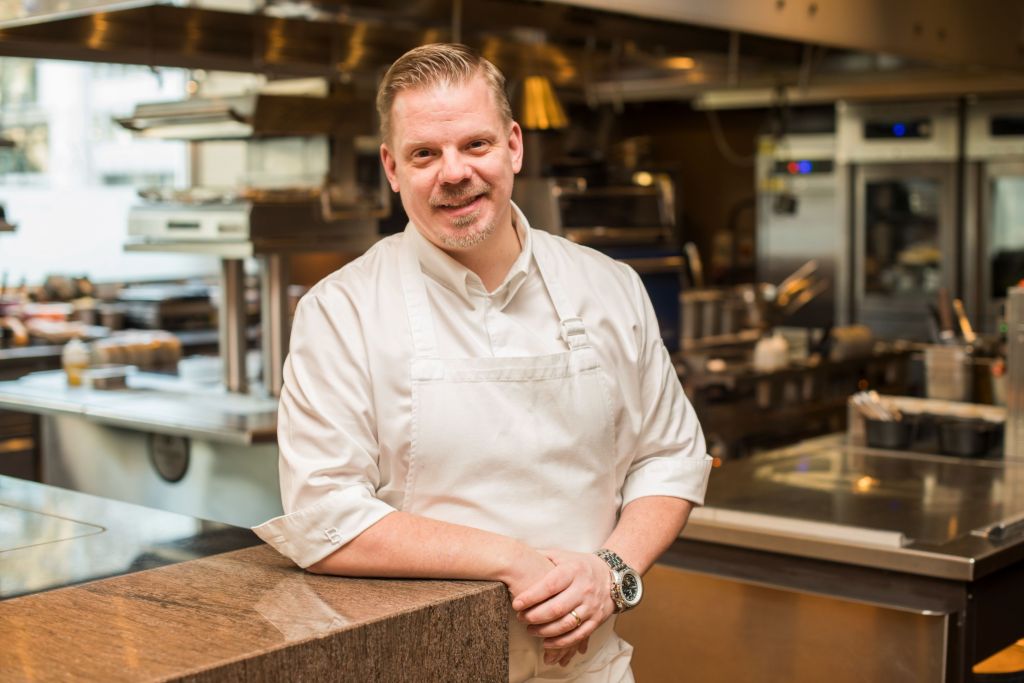 The Montagu by Roger Olsson is one of the most interesting, innovative and impeccable restaurants in London, quietly grafting away and producing some of the best plates in London. Roger unveiled a new reimagined menu at The Montagu Kitchen last year, celebrating modern British cuisine. The menu includes what Roger calls ‘British Icons’, inspired by seasonal produce and carefully sourced ingredients, working with only trusted suppliers who place the same importance on quality and sustainability.

Roger and the team tell a captivating gastronomic story where you will travel through the different chapters of the menu with some brilliantly unique must try dishes like a crispy rosette filled with trout roe and chives with a spritz of malt vinegar. There are also some delicious edible surprises on the way like petit fours you can play chess with and a sharing dish of Norfolk Quail Wellington you will not want to share. 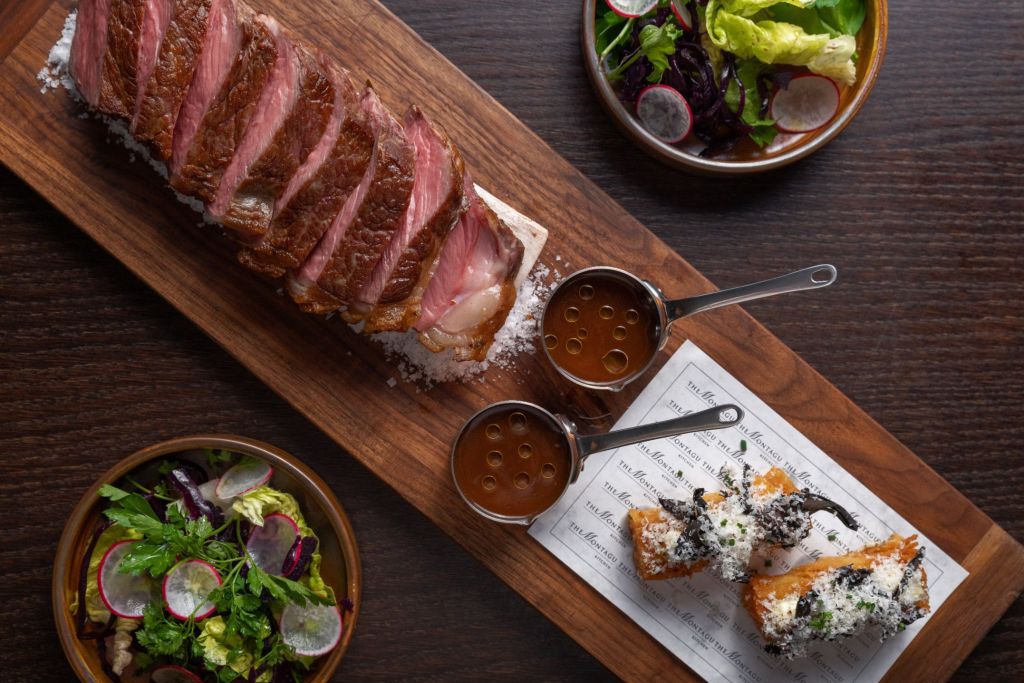 The Montagu Kitchen is very much a destination restaurant with precise cooking and brilliant flavours. Look out for new dishes making appearances as the seasons change like a Spilman Farm asparagus and Jersey Royal potato tart with a truffle and brown butter emulsion. 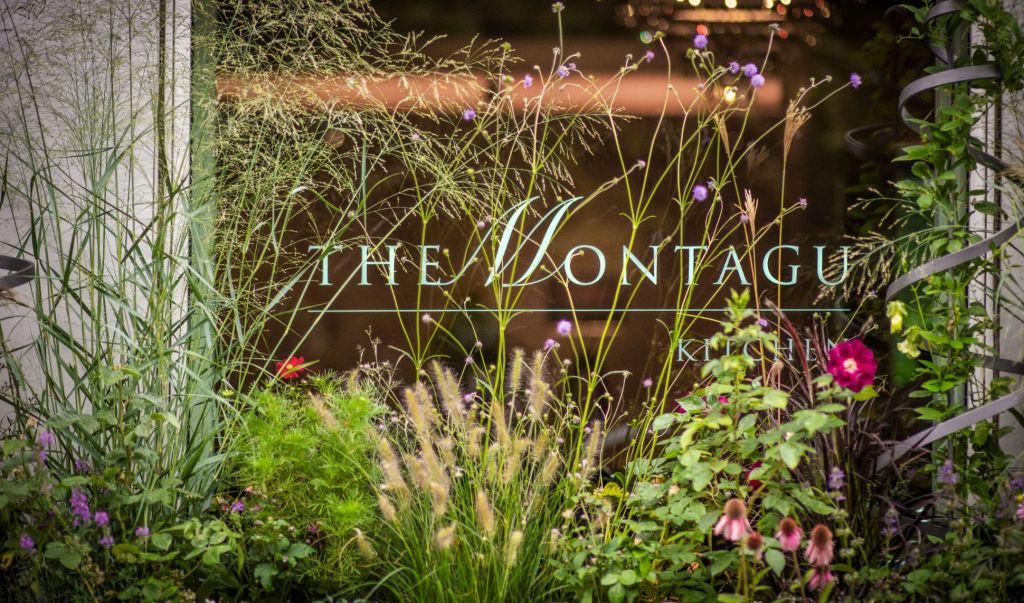 The next morning, Sunday brunch was on the cards. There are many classic dishes with a twist, including the Sir Winston Treat, a version of eggs royale made with lobster hollandaise, The Winston, a beef burger made with Winston sauce or The Gardener, a vegetarian burger made with halloumi. Whatever you choose it’s advisable to have only had a light breakfast or to have skipped breakfast altogether; the brunch at the Montague Kitchen is a feast.

So let us begin with a glass of Telmont Brut Reserve NV champagne. It’s not a brand that many will have heard of, although a recent investor by the name of Leonardo DiCaprio may be more familiar. Telmont is a relatively new kid on the Champagne block, its origins date back to the early 1900s. It’s 100% organic and has hints of vanilla, lemon, apple, custard and almonds.

The champagne paired beautifully with my oysters from Whitstable that were dressed with Kentish tabasco, leek and olive oil. Then it was on to the mains for the Sunday Special of rump of Hereford beef with heritage carrots, Yorkshire pudding and roast potatoes. The beef was deliciously rare; the quality of the meat was evident in the way it melted with each mouthful. The tasty carrots had a reassuring bite to them, and the roast potatoes were wonderfully crisply. This was paired with a glass of La Mascota Malbec, 2018. A bold tasting wine with hints of vanilla, plum and cherry. For desserts, I had the Caramel Cannelloni, an exquisite chocolate ice cream with a hint of Maldon salt.

If you’re booking a one-night stay on a Saturday night, you can take advantage of a complimentary offer to extend the stay and check out at 6pm. This makes the stay so much more relaxing and avoids that 11am dash to the reception desk.

The Churchill is a stylish hotel that’s ideally located, with friendly staff and excellent food. It’s difficult to find anything to dislike. It’s interesting to ponder what Churchill would have thought of a night at his namesake hotel or even the Japanese bidet for that matter. I expect he would have felt right at home:

My tastes are simple: I am easily satisfied with the best’. [Sir Winston Churchill]

A post shared by Hyatt London – The Churchill (@hyattchurchill)

All imagery courtesy of Hyatt.