Nuet [pronounced new-it] is a proudly Norwegian Dry Aquavit. The world’s first premium aquavit has arrived on British shores and was developed in Oslo over 6 months with more than 100 test distillings.

Nuet, which translates as ‘the now’, is created from grapefruit peel and blackcurrant influences accompanying the traditional caraway and has a fresh, smooth finish. We met with founder Morten Halle to find out more about this rather interesting creation.

What makes Aquavit such an interesting liquid?

I would say what makes aquavit interesting is first and foremost what it represents to us Scandinavians, which is tradition and celebrations. It’s been a staple in Scandinavian households for the past 500 years, and is enjoyed during celebrations like Christmas and midsummer. The emotional connection the liquid has to us Scandinavians is very strong, and it really is a piece of our lifestyle and heritage. 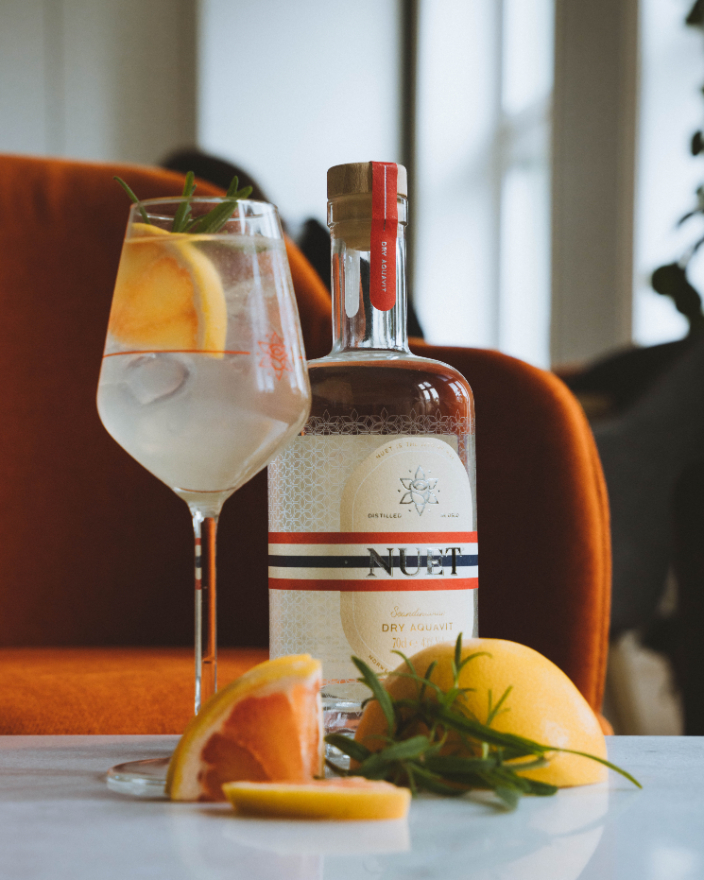 Nuet is the first aquavit that combines the almost 500 years of tradition with innovation and modern thinking, in order to show the world the full potential of aquavit as a spirit. It’s the world’s first super-premium aquavit, and the first and only aquavit ever to win a gin award. It’s unlike any spirit currently on the market.

Tell us about the organic provenance of the ingredients you use?

All the ingredients used in Nuet Dry Aquavit are sustainably sourced. The characteristic caraway is from a farm in beautiful Inderøy in the North of Norway, and the potato spirit on which the aquavit is based is also locally sourced. 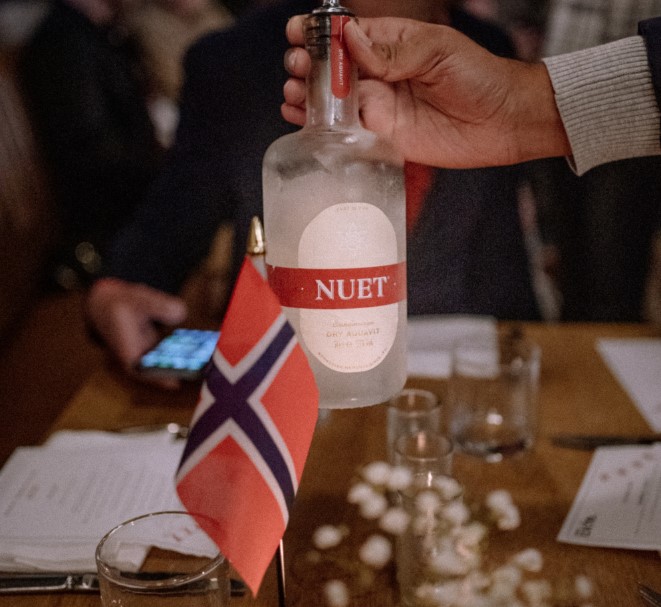 What cocktails have you created using Nuet?

When we created the recipe, the litmus tests we needed to pass were that it needed to really shine with tonic and in a dry martini. Simply because they are honest cocktails with no place to hide, so you need a proper high-quality spirit for them to taste great. And there were no aquavits on the market that to our knowledge could do both. In general, you can elevate any usually gin-based cocktail by replacing the gin with our Nuet Dry Aquavit. After all, it is the first and only aquavit to ever receive a gin award. And I have to of course mention our signature cocktail, which is the Nuet Spritz. It’s a fresh citrusy alternative to other spritzers that some tend to think can be a bit too sweet. We have introduced this to the Norwegian market, and it’s gotten a fantastic reception, all the way from ski resorts down to coastal venues in the archipelago.

What food apart from Scandinavian food does Nuet work with?

We love experimenting with Nuet Dry Aquavit, both in the making of food and as a cocktail to go with food. I would recommend the Nuet Spritz for any savoury food as well as fruit you would bring out for a picnic. The Nuet & Tonic works great with more salty snacks, whilst a Nuet Negroni is great with charcuterie and olives. We have also cured trout and reindeer meat in Nuet Dry Aquavit, and it’s excellent. We’re in several Michelin star restaurants in Norway, where the Nuet Dry Aquavit is used in anything from the house martini to custom experimental cocktails that go with the food.

Talk us through the tasting notes

What you first notice about the Nuet Dry Aquavit is the clean oily viscosity, which it gets from the blackcurrant berries. It’s quite strong on the nose, with plenty of grapefruit and caraway. However, you’ll be surprised when you sip it, as the heat from the alcohol does not burn at all. This tends to lead to a quite a few raised eyebrows and smiles, accompanied by a “wow, I wasn’t expecting that” and “very smooth”.

Traditional aquavits tend to give a rather burning sensation, as a result of the combination of strong spices like fennel and anise seeds, which people who have tried it will agree to. We wanted to change this, and give it a smooth finish, without making it dull and tasteless. The smooth finish also has complexity, which it gets from an array of subtle effects from spices like angelica seed, rosé pepper, orris root and many more. And, whilst most aquavit are quite heavy on the sugar, Nuet Dry Aquavit has none of it, which is part of what makes it so well-suited for tonic and martinis. The end result is an aquavit with a strong citrusy nose, a lovely oily viscosity and a smooth yet complex finish. 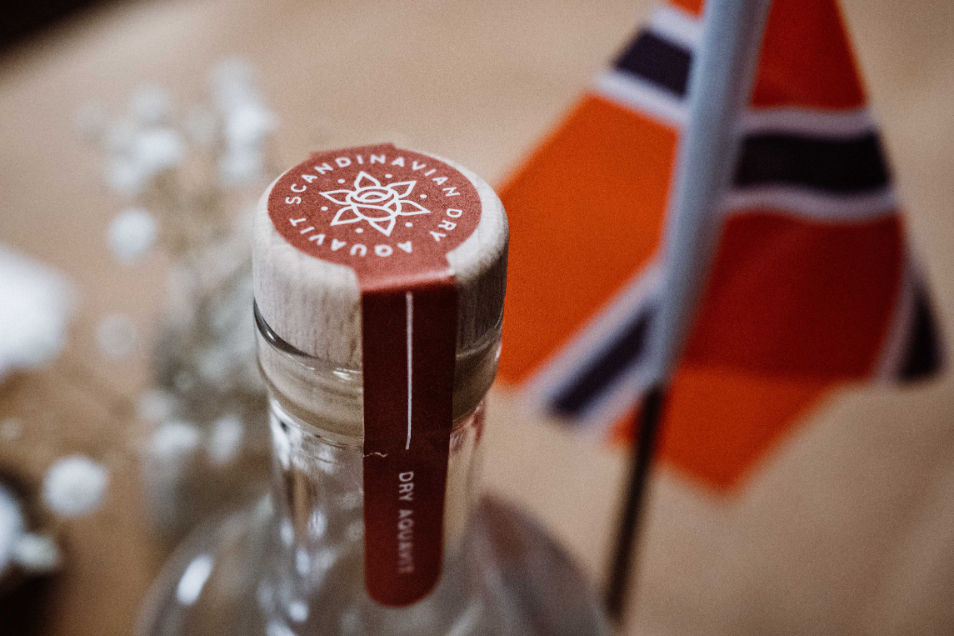 Tell us about the production process and what makes Nuet so pure?

Nuet is distilled in the exact same way as a London Dry Gin. Botanicals are macerated for 24 hours, before they are added to the copper pot. We also use a vapor basket in order to extract as much flavour from our lovely botanicals as possible without preservatives or sugar. It’s just high-quality ingredients used the proper way, with a recipe that was developed with an aim to create the best aquavit ever made.

Nuet is so smooth and at the same time has a 43% ABV – how do you achieve this silky smoothness?

The smoothness comes from the composition of the ingredients, and from the reaction with the copper in the still. Traditional aquavits tend to leave a real burning sensation when you drink it, which has been part of why the spirit as a category has remained a Scandinavian secret, and not reached popularity abroad. This burning, which people tend to attribute to the alcohol content, is actually from the spices in traditional aquavits, and their composition. The combination of caraway, fennel and anise seeds creates this sensation of alcohol heat. We wanted to change this, and show that aquavit can indeed be smooth without changing what makes an aquavit a real aquavit. So we kept the characteristic caraway, and we replaced the fennel and anise seeds with modern botanicals like grapefruit peel and blackcurrant.

But the real effort lies in getting the composition just right. This is what we spent almost 8 months tweaking and tweaking the recipe until we got it just right. In fact, the first time we tried the Nuet Dry Aquavit (which then was called test number 7.1.1), the four of us were sitting in my living room in Oslo, and Benjamin, our product developer genius, poured us all a small glass. We all loved it, and marvelled at how smooth the finish was. Only then, Benjamin told us what we had tasted was actually 85% ABV!! So it really depends on the ingredients and the composition of those, not just the alcohol content.

What is the second best thing to come out of Norway after Nuet?!

I have to say Norwegian chocolate. We really do have some of the best chocolate around, though I’m of course quite biased on the subject. Scandi Kitchen in London sells them all, which I was very happy with when I lived in London a few years ago.

What is next for Nuet?

We are a small company with such a unique new product so it’s really just more of the same. We’re pioneering a whole new type of aquavit, which is already a very niche category unknown to most. So we have a lot of educating to do, to really show people all over the world what Nuet is. So we have our hands full there.

However, we are launching a new product this autumn, which we think will be popular. That too will be a world’s first, a product unlike anything that has been made before, so we keep pushing the boundaries for what can be done with aquavit. We’re quite excited for that, and we’ll definitely keep you posted. Besides that, we hope to keep attracting new talent to our company, and we are always on the lookout for new colleagues, partners and investors that want to join us on our journey to share Scandinavian moments with people all over the world.

All imagery courtesy of Nuet.