While neither Latvia nor German opera has ever been particularly on my radar, a long weekend of classical music and exploring the capital of Riga was an unexpected treat as I waddled into the third trimester of my pregnancy.

Flying at 28 weeks is perhaps not recommended but one must be bold and I knew it would be my last chance of a childless jaunt for quite a while. Plus selling it as a classical music festival, not Reading and Leeds, kept my husband sweet. 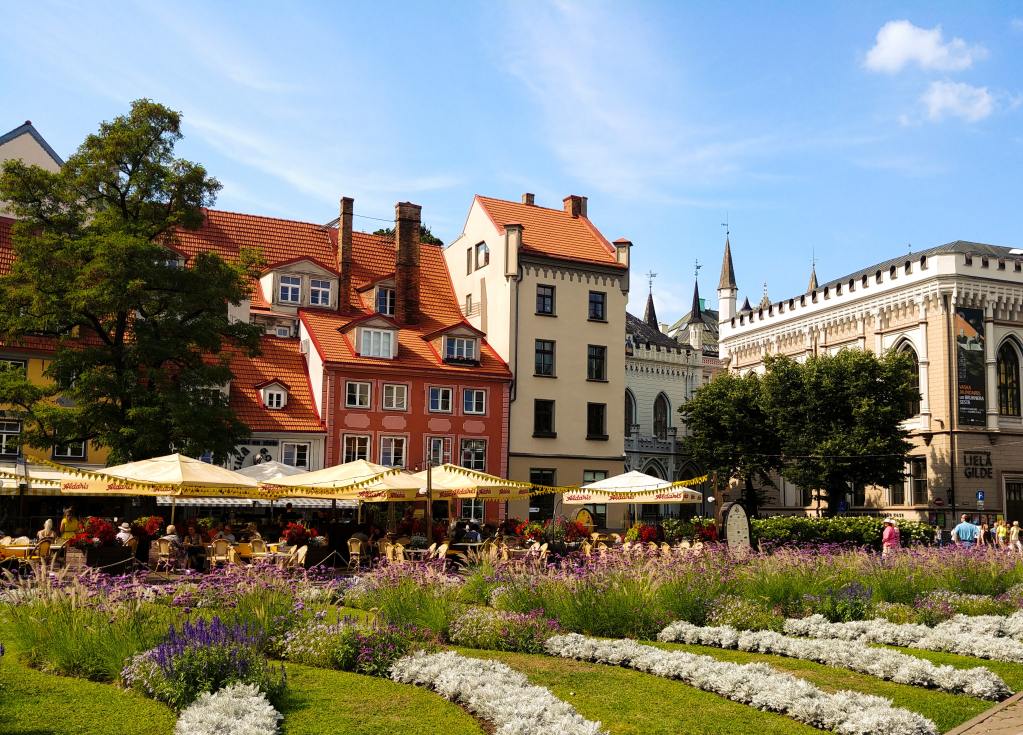 Descending into Riga by air, the vista was an expanse of forest, bringing to mind spooky fairytales, dumplings and winter. In early September the weather was certainly fresh – warm but with a definite Baltic bite so I’d recommend bringing warm clothes especially for the evening.

Riga is a charming city. Located at the mouth of the Duagava river in the middle of the country, it’s a curious mix of chocolate-box buildings and lush gardens but with a slightly stern Soviet vibe. Latvia only gained its de facto independence from Russia in 1991 and much of the infrastructure like train stations, municipal buildings and landmarks still have a marked USSR feel. The Freedom Monument in the centre of the city honours all the soldiers who fought in the original Latvian War of Independence in 1918 and at 42 metres high, is a stark and sombre reminder of the country’s past.

Despite the city’s volatile political history, from Prussian rule to a domestic dictatorship to Nazi occupation to eventual freedom, Riga is a thriving place. The Old Town is a cobbled-street maze of restaurants, bars, pokey shops, coffee joints and high-street chains. It was peaceful, too. Fear of COVID, working from home or simply being a quiet time of year for Latvians meant the capital wasn’t busy at all. It’s also easy to walk everywhere and if your feet get tired Bolt taxis are plentiful and cheap.

The main focus for my visit to Riga, the European Captial of Culture in 2014, was the Riga Jurmala Music Festival – a triumph of classical music concerts taking place in Riga and nearby Jurmala over four weekends. I was in town for the finale. A leading international orchestra and conductor anchored each weekend so for me, it was to be “local boy done good” Andris Nelsons conducting the Bayreuth Festival Orchestra. 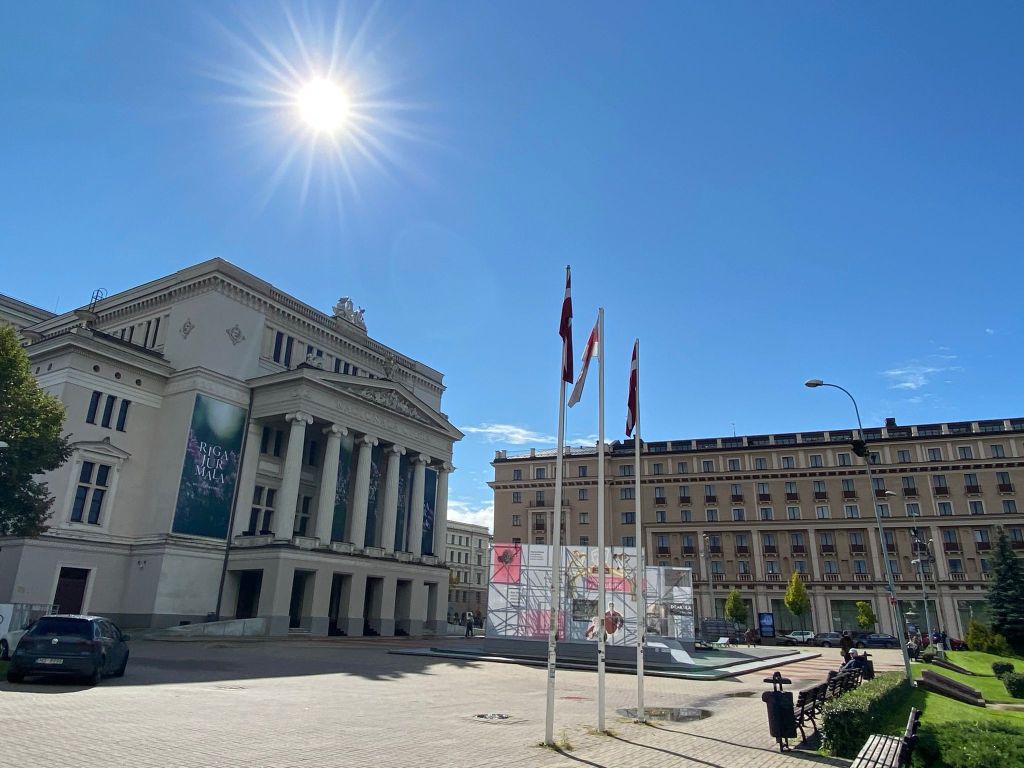 Now, I shan’t pretend to know a great deal about classical music but Nelsons is also the Musical Director of the Boston Symphony Orchestra – and that sounds like a pretty big deal to me.  The shows took place at the Latvian National Opera, a compact but nonetheless grand venue that seats around 1,500 people and was filled to the brim. Both gala performances were Richard Wagner themed – one of the German composer’s musical homes was Riga and where he began work on his opera Rienzi – and so over time it has become a tradition in the city to host regular Wagnerian performances.

I had never watched German opera before. It’s pretty intense. The world-famous German tenor Klaus Vogt performed on the first night, who is incidentally Angela Merkel’s favourite singer, and while I didn’t understand much of what he sang his passion, as well as his glorious long hair, were very enjoyable to watch. 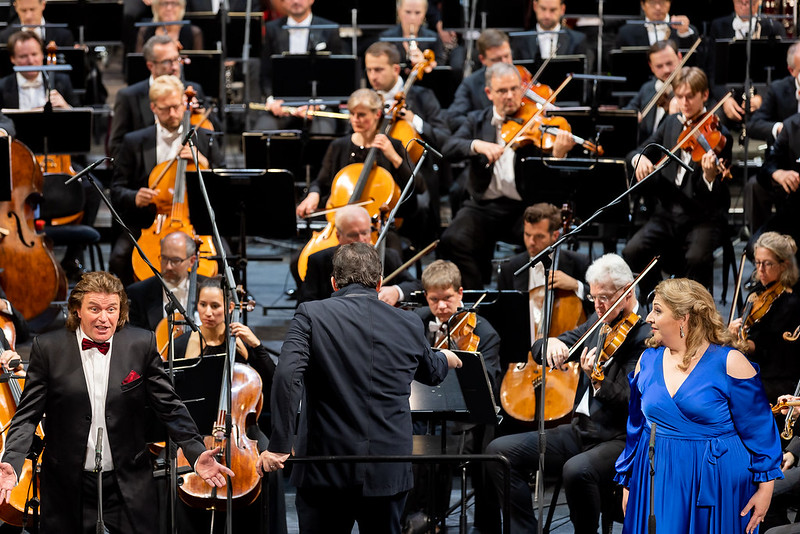 He was joined the following night by magnificent performances from the charismatic soprano Christine Goerke and bass Gunther Groissbock. The trio performed scenes from The Valkyrie where a brother and sister fall in love with each other, which was hugely entertaining if a bit gross.

A definite highlight of the weekend was watching the iconic tune – beloved of many a movie soundtrack – Ride of the Valkyries performed by a live orchestra. Goosebump inducing. It’s a very powerful piece of music and seeing it at such close quarters was very special indeed. 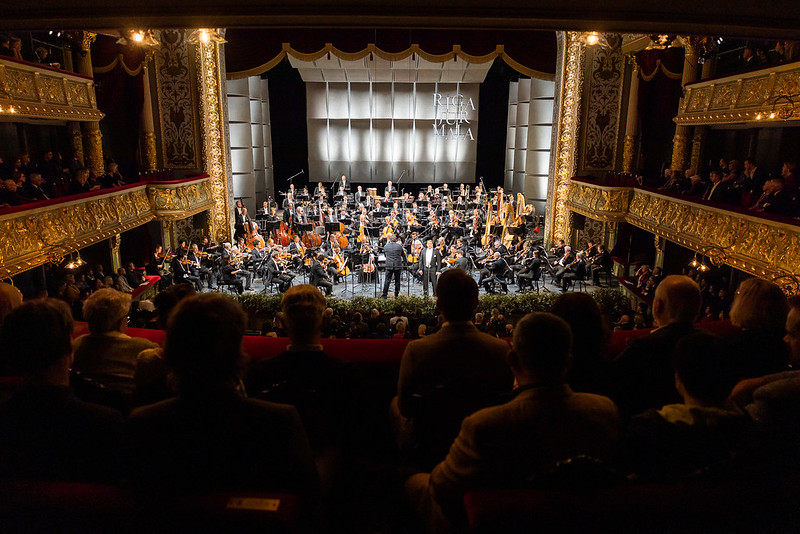 Suitably full of classical music and culture, next up was exploring Riga and it’s the perfect size for a weekend. I based myself at the four-star Wellton Riverside SPA hotel in Old Riga, a modern structure that overlooks the water with fabulous views of the National Library of Latvia and the grotesque but assuredly arty human centipede statue.

The hotel has everything you might need and crucially, is within walking distance of the opera house, town centre, shops and Bastejkalns Park, a charming lush space on the eastern edge of the town with windy paths, a channel and picturesque bridges. Breakfast is plentiful – buffet and hot made to order options – and lasts until 11 am. There is also a decent subterranean thermal spa experience with a pool, sauna, steam room, jacuzzi and icy plunge pool. It costs 20 euros (£17) and you need to book in advance. It’s not out of this world and there isn’t a huge amount of relaxing space but the pool is lovely and it was a pleasant way to spend an hour before supper. 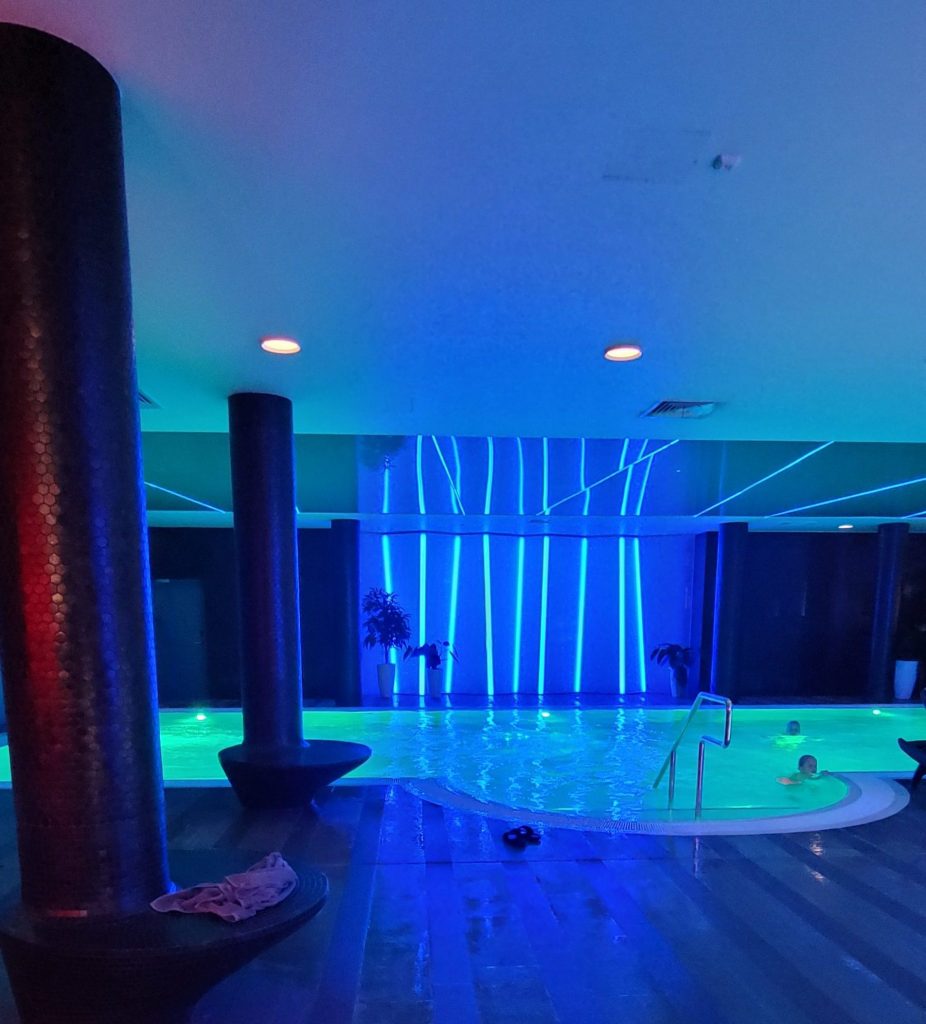 If you fancy a sunset cocktail with a view there are two great options. First, the Skyline Bar at the Radisson Blu is located on the 26th floor and offers panaromic views of the city. The rather flamboyant cocktails are inspired by Aleksandrs Čaks’ poems and Mark Rothko paintings and if you’re after a touch of high-class in the familiarity of a Radisson, it’s definitely worth a visit. Note it’s closed on Sundays and Mondays. A decent alternative is Herbarijs bar in central Riga, where you’ll get magnificent sunset shots while enjoying Prosecco on the terrace under a cosy blanket. 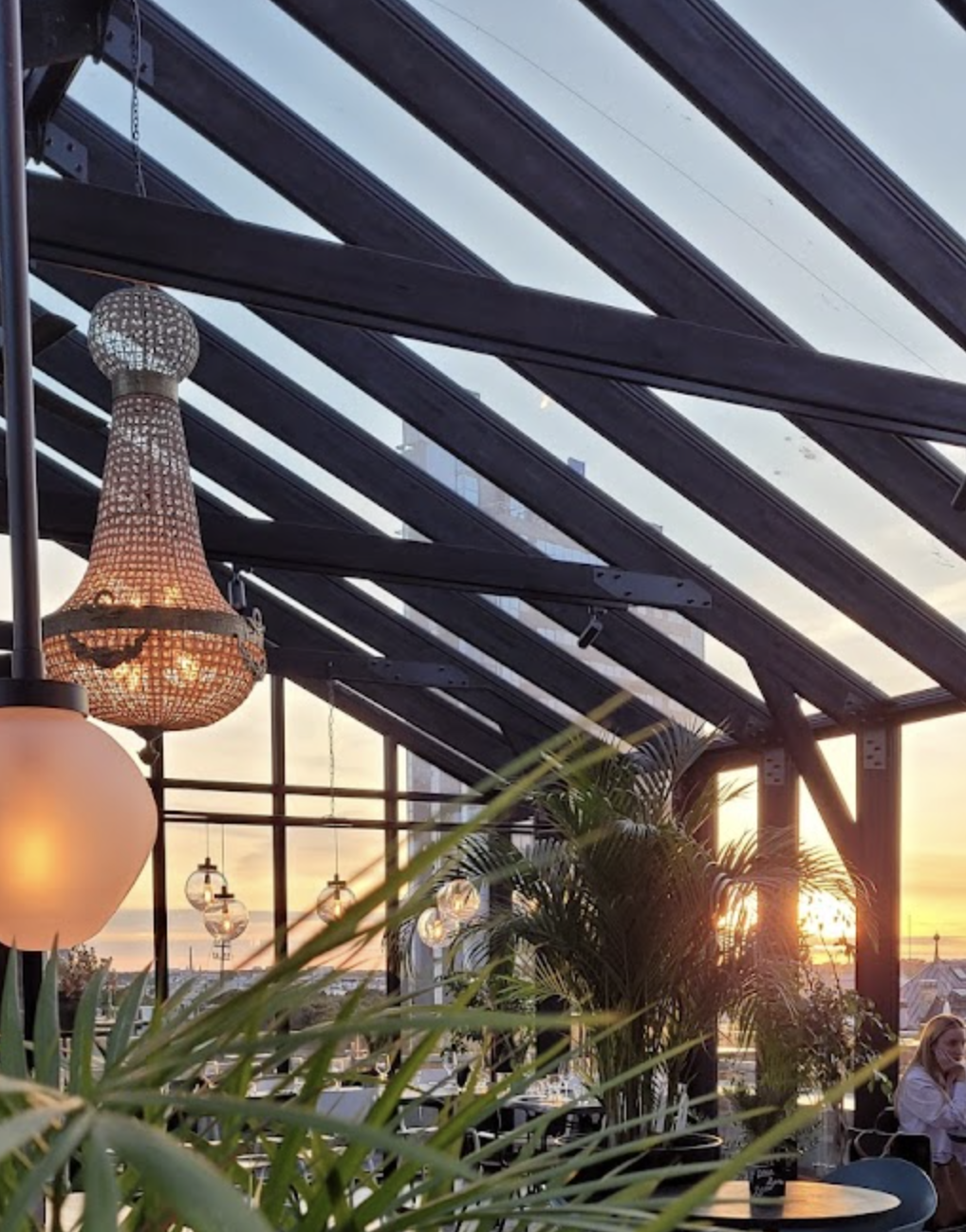 In the evening, the bars dotted around Riga are buzzy and shots of the highly potent Black Balsam seem to be thrown about with abandon. I had a sniff – very strong, I can confirm. To eat, I highly recommend trying Restaurant Petergailis, located right next to a 13th-century church in one of the town’s little squares. As the night drew to a close, a busker sang and it was rather lovely sitting outside eating trout tartare and roast lamb next to a heater. Note that at the time of visiting,  Latvia did not recognise the NHS app as proof of vaccine so we were not allowed to sit indoors. That wasn’t so bad in early September but as winter approaches, this would certainly be a problem.

A short train ride away is Jurmala, a chic resort town where the rest of the festival concerts are held and worth a day trip to. I took the train – it was an “authentic” experience for sure and not exactly the Orient Express but fun, and most importantly, cheap.  As well as the delights of Jurmala town – it has some great shopping and is full of wooden villas – I took a bracing walk on the beach and ate Latvian honey cake while looking at the Gulf of Riga and wondering how anyone was swimming – it was freezing. Latvians must be quite hardy.

I would recommend Riga as the ideal place for a long weekend and if you’re not a fan of Baltic winters, September is the good time to visit. Culture, good food, shopping and tons of history means it’s an affordable and quirky alternative to other Eastern/Northern European minibreak hotspots. Air Baltic has also just launched a new fleet of aeroplanes too so you’ll arrive in style.

The Riga and Jurmala Music Festival was a sublime opportunity. To be around others who adore classical music was quite inspiring. The beauty of the festival is that you can immerse yourself in as much or as little music as you like and combined with a beautiful and unusual setting and friendly people,  I would certainly return.  And I can’t help thinking my unborn baby will now love Wagner.