Unless you’re particularly hot on your Filipino history, I’d hazard a guess that you’ve never heard of General Carlos P. Romulo. To fill you in – General Carlos P. Romulo was the Philippines’ longest-serving Secretary of Foreign Affairs. He’s also the namesake of swish Filipino restaurant, Romulo Café, tucked away at the westernmost end of Kensington High Street. And during October for London Cocktail Month 2020, Romulo Café joined forces with Don Papa Rum to create a special ‘Sugarlandia’ menu honouring the 76th anniversary of the Leyte Landing – and, of course, Romulo himself.

As you’d expect for the area, Romulo Café is a fine dining spot – but, as befits a restaurant owned by the grandchildren of the ol’ General, there’s a distinctly homely vibe, too. Before stepping inside, I note that the restaurant itself reminds me of someone’s house. There are winding railings and a poignant lime-coloured bench poised outside welcoming you inside. 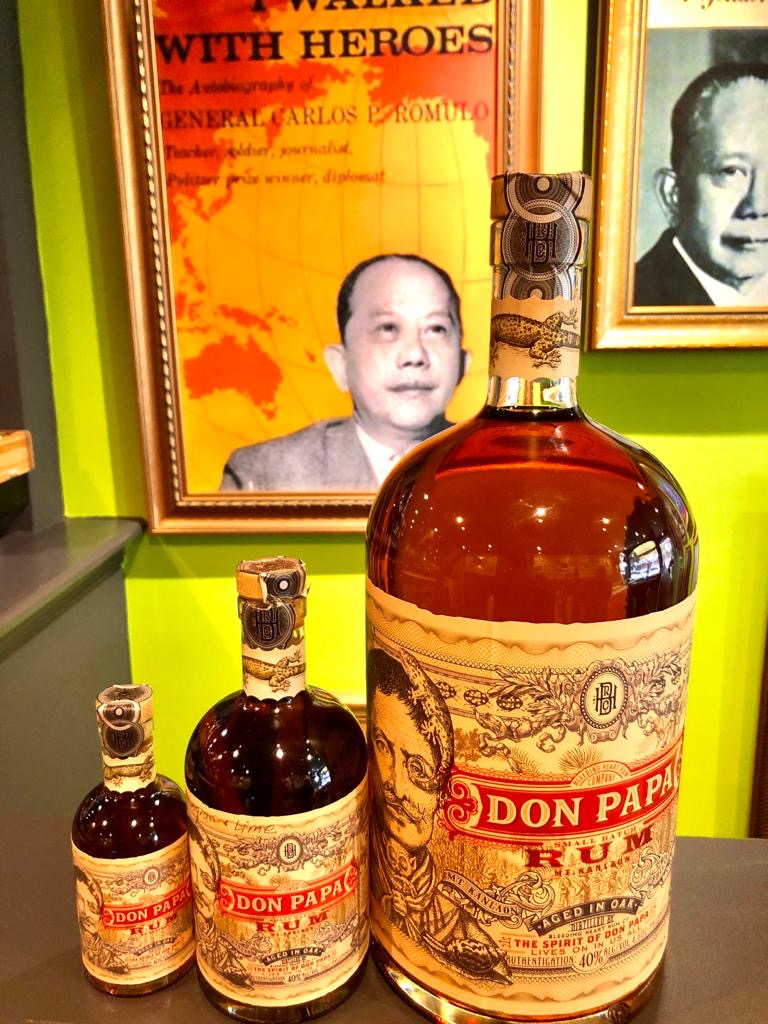 This is, I discover, entirely deliberate. The interiors are inspired by the heritage home of owners Rowena and Chris’s grandparents, and there are even family portraits and photographs littered along the walls. The tonal décor is accented with green tablecloths and chairs and, of course, clear plastic screens separating the tables.

So: the menu. Designed in collaboration with Don Papa Rum (a premium rum also hailing from the Philippines), its flavours are inspired by the region of the Leyte Landing – and, at £35 per person for three courses and two cocktails, it’s also a bargain. Filipino cooking is known for its fusion of influences, drawing together flavours and dishes from Asia, Spain and South America. The Sugarlandia menu (named after the home of Don Papa) is the perfect example of this fusion genre of cooking. 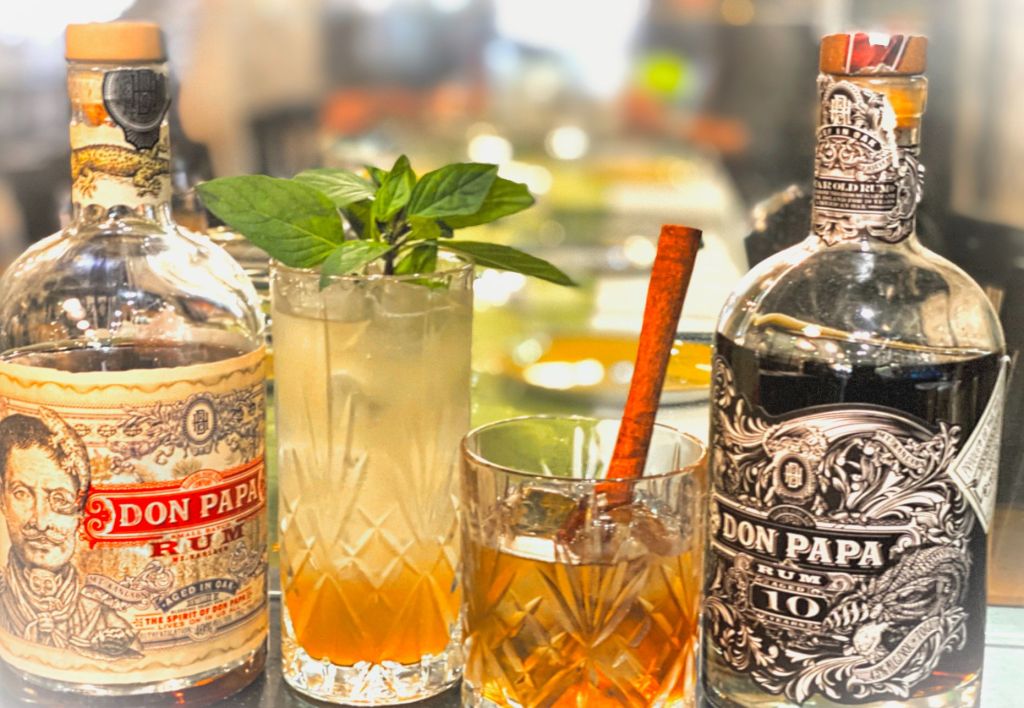 Ingredients tow the line between familiar and far-reaching; the first cocktail, Sunshine in Sugarlandia, balances lemongrass, honey, Don Papa rum and calamansi (a Filipino lime, for those, like me, not in the know) and tastes like a boozy fragrant ice cream float. We also tasted the Don Papa on its own. This premium aged, single-island rum from the Philippines is smooth, delicate and refined – Probably because it is created on the foothills of an active volcano where sugar cane is milled to produce sweet, rich molasses. 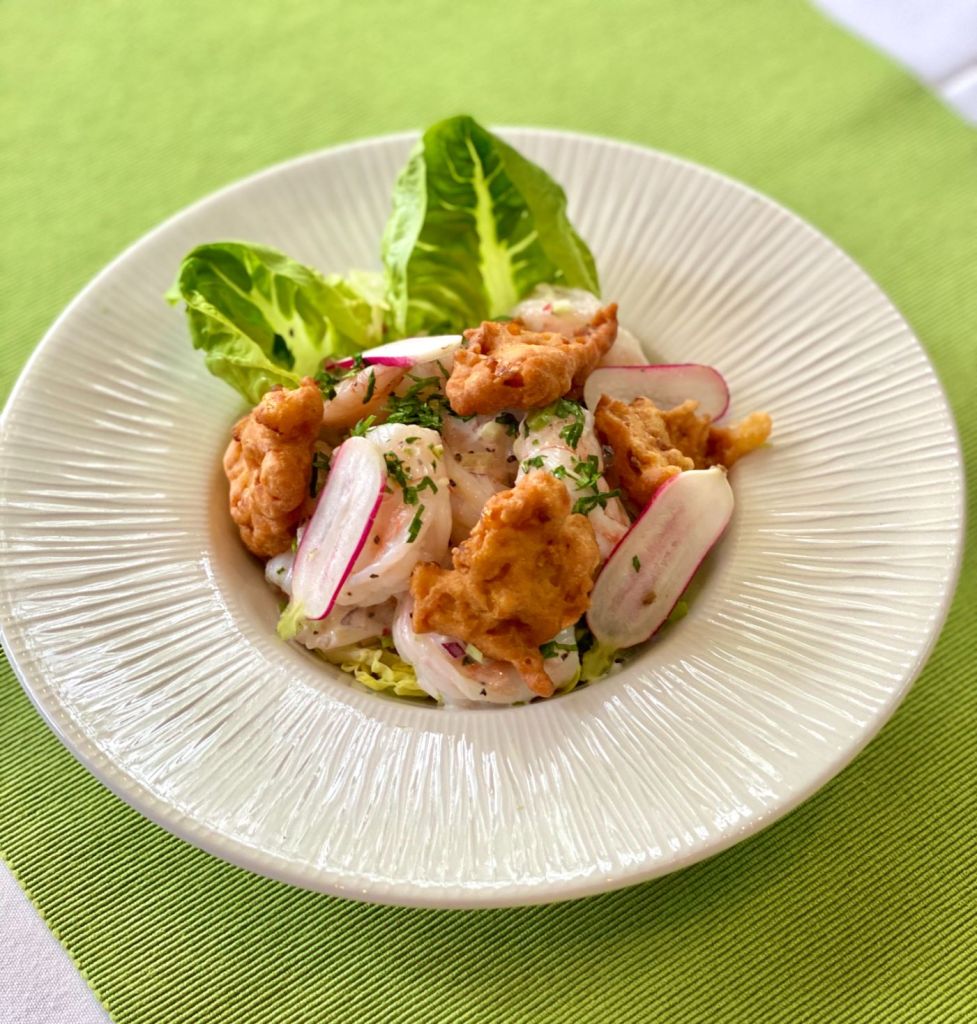 We take our seats (under the watchful eye of an oil painting of Romulo) and turn our attentions to the menu’s opening number: lime scented prawn kinilaw. ‘Kinilaw’ is a traditional cooking technique a little like Spanish ceviche, in which seafood is ‘cooked’ raw. Here, the prawns have been poached in a salty lime and coconut sauce and topped with sweetcorn fritters. They’re served cold yet are wonderfully tender and absolutely delicious – a good thing too, as the portion sizes are extremely generous. 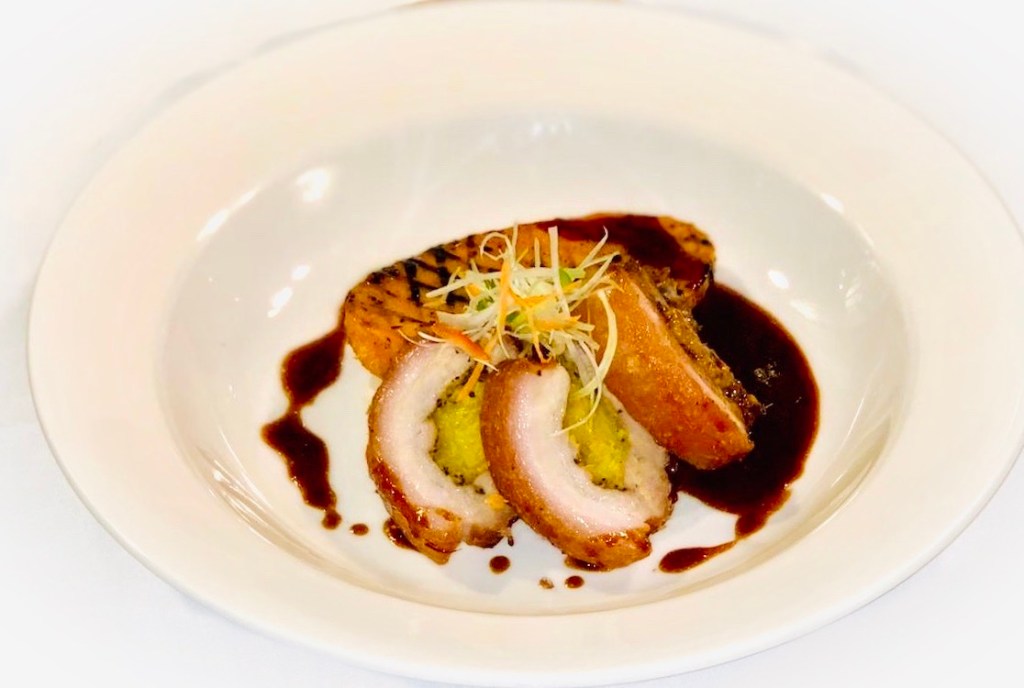 Next, to land: a pork lechon roll stuffed with turmeric rice. Lechon is Spanish for suckling pig, and a lechon roll is the swish Romulo interpretation of it. There’s almost too much to love – the crispiness of the skin! The tenderness of the meat! The sweetness of the humba sauce! The smoothness of the grilled sweet potato! It is, I remark to my dinner date, like the best Sunday roast I’ve ever had – except the flavours are much sharper. It’s a Friday night, and I doubt my nan would think to add turmeric to her pork joint (but she definitely should). 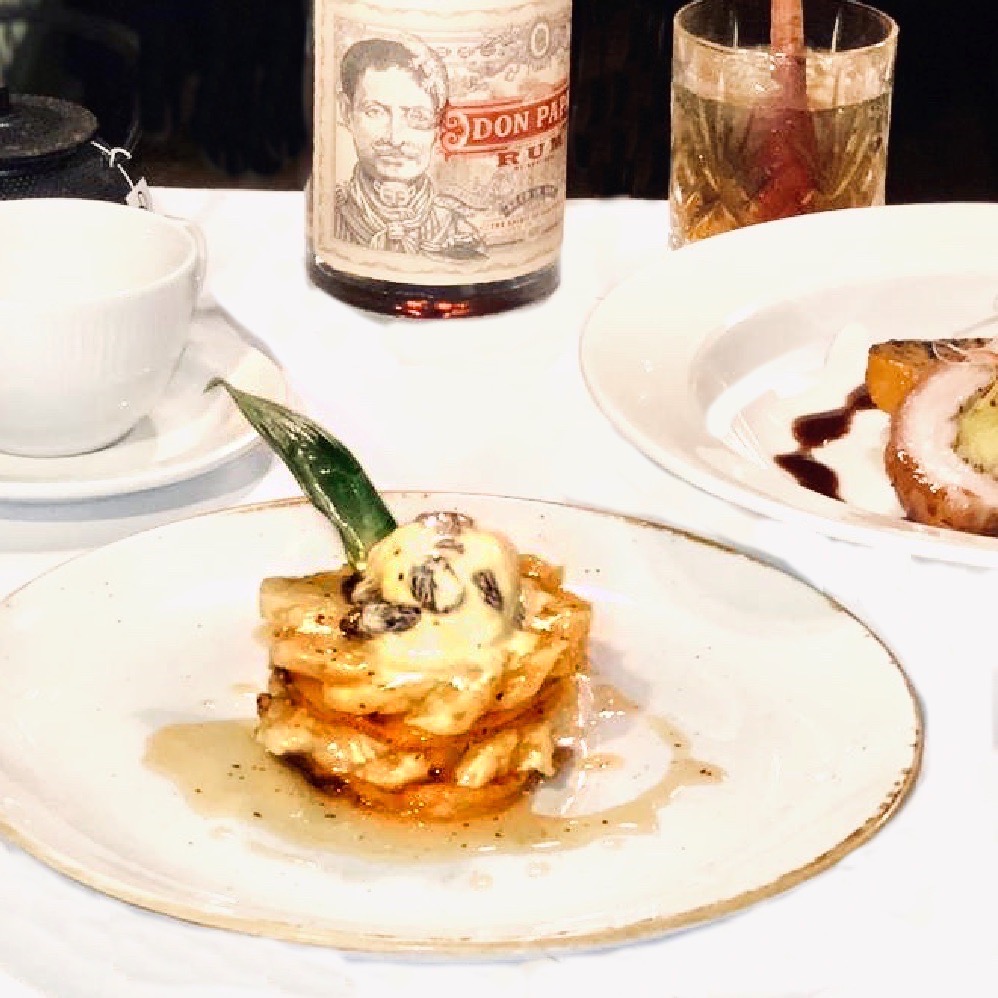 It’s a tropical round off for dessert – Don Papa and ginger glazed pineapple stacked on top of otap (puff pastry cookies made with coconut) and served with rum and raisin ice cream. The menu claims it’s a version of a mille-feuille; my mouth declares it to be utterly delicious.

Our second cocktail arrives, and it’s at this point that dinner and drinks start to sing in harmony. The Boku Pandan is a rum, coconut, chocolate, sea salt and pandan mix – pandan being an aromatic herb that pairs unusually yet spectacularly with the chocolate and rum. It’s not overwhelmingly sweet and has the freshness of whiskey without the fire – which is handy, given that dessert is swimming in a lake of lush caramel sauce.

As we leave, my overwhelming feeling is that I’ve just had the best Sunday roast of my life cooked by my newly adopted Filipino family. The food is as sharp as it is sentimental, and from the moment we were welcomed through the door to being waved off, it was as though we had been for dinner with our old friends. It was the perfect antidote to these isolated, strangest of times. I reckon General Romulo would have been chuffed.

To discover more about Romulo Café and Restaurant, visit: romulocafe.co.uk

All imagery courtesy of Romulo Café and Restaurant

A post shared by Romulo Cafe and Restaurant (@romulocafelondon)