Richard Branson has gone and done it again. Is it a new Island? No! Is it a spaceship? No! Is it a red sleek and sexy time machine? Not yet! It’s a luxury cruise ship – a 2,700 capacity voyager, and her name is Scarlet Lady who will have a unique approach to Caribbean cruising, setting sail in March 2020. The best part of this floating island is that it’s adult by design, a child-proof floating vessel. 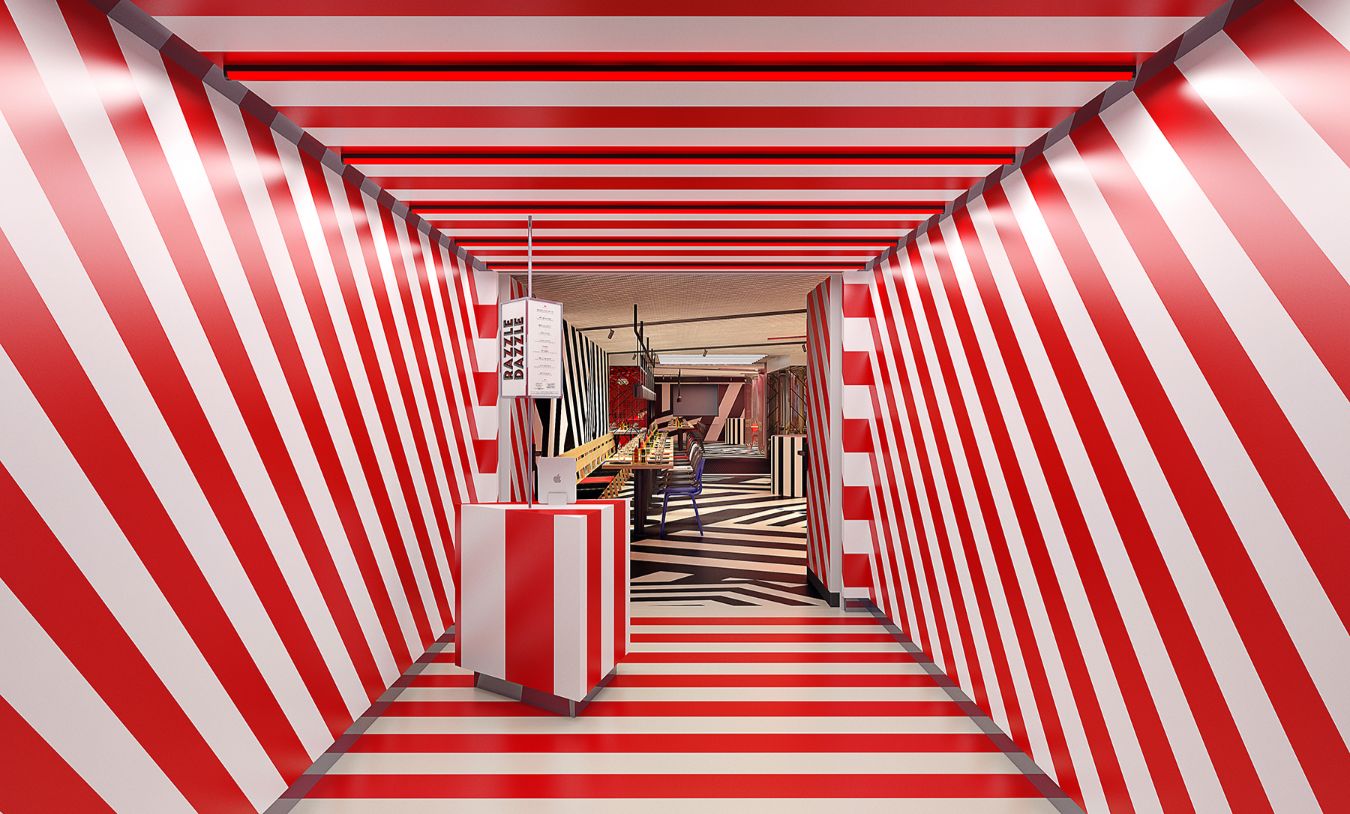 The Greta Thunberg generation may be too young to set sail on her Ladyship for now, but I’m sure they’d salute Virgin Voyages for being the first ever clean fleet in our oceans. For they’ve partnered with Climeon, a Sweden-based technology company, with a goal to significantly reduce carbon dioxide emissions by converting engine waste heat into electricity.

I’ve fond memories of working for Virgin Music previously, a company who don’t discriminate for being different but embrace diversity and commit to inclusion, proclaiming “Be yourself – whoever you are.” So I’m delighted Branson’s beautiful 1,150 crew are allowed to flaunt their tattoos and piercings. Oh, and should you envy their permanent artwork, you’ll be relieved to know that Virgin Voyages have teamed up with legendary Tattoo Ink who’ll stamp you with vegan friendly ink, piercings and permanent make up treatments. The Squid Ink Parlour is the first tattoo studio at sea and will have two resident tattoo artists. 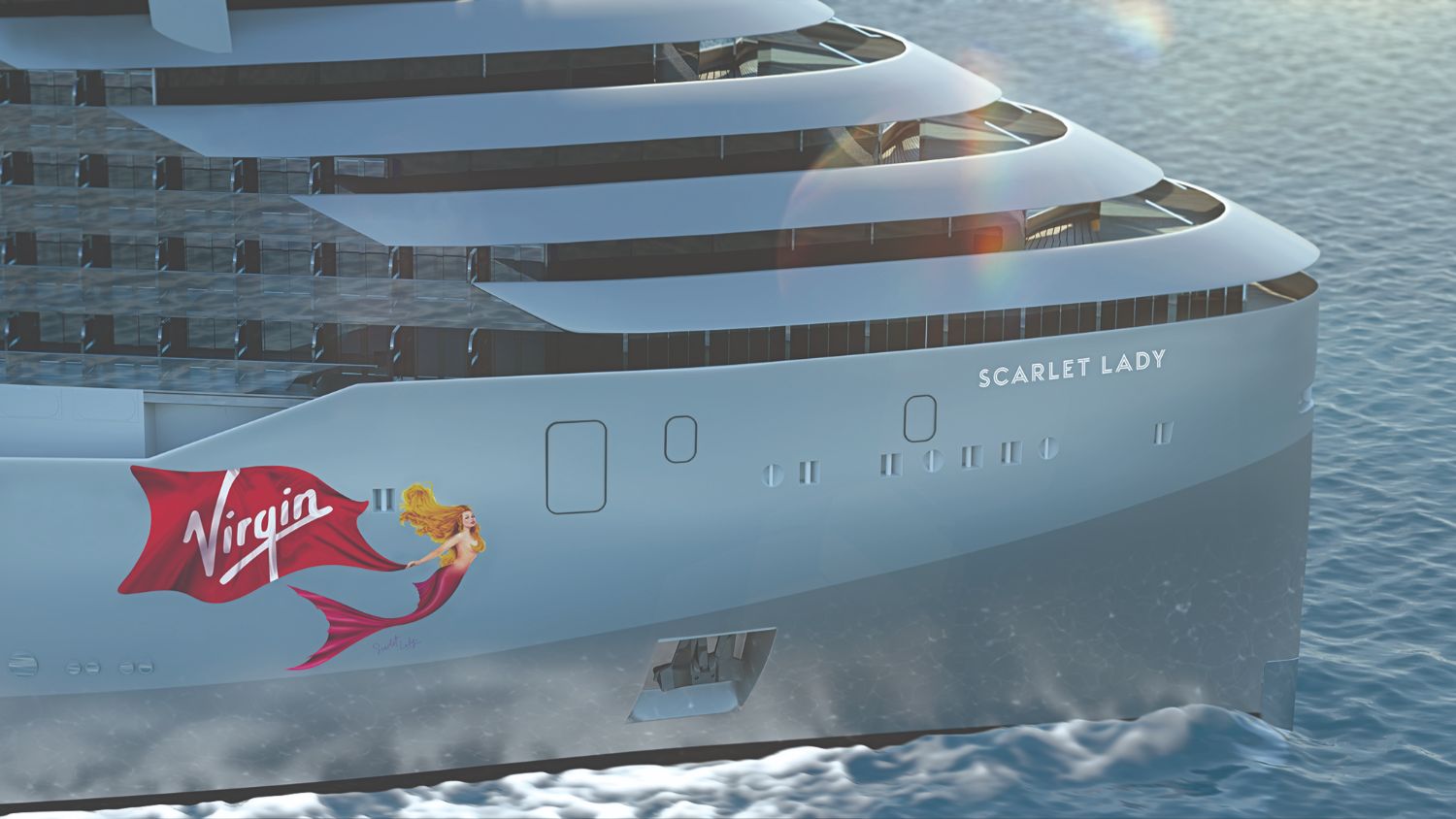 If like me you enjoy facts and figures of beastly machines, get a load of this. The ship is 278m-long and 38m-wide and has a gross tonnage of 110,000t, that’s the equivalent of 22,000 elephants. Scarlet Lady is powered by two eight-cylinder and two 12-cylinder Wartsila 46F engines and has 17 decks. 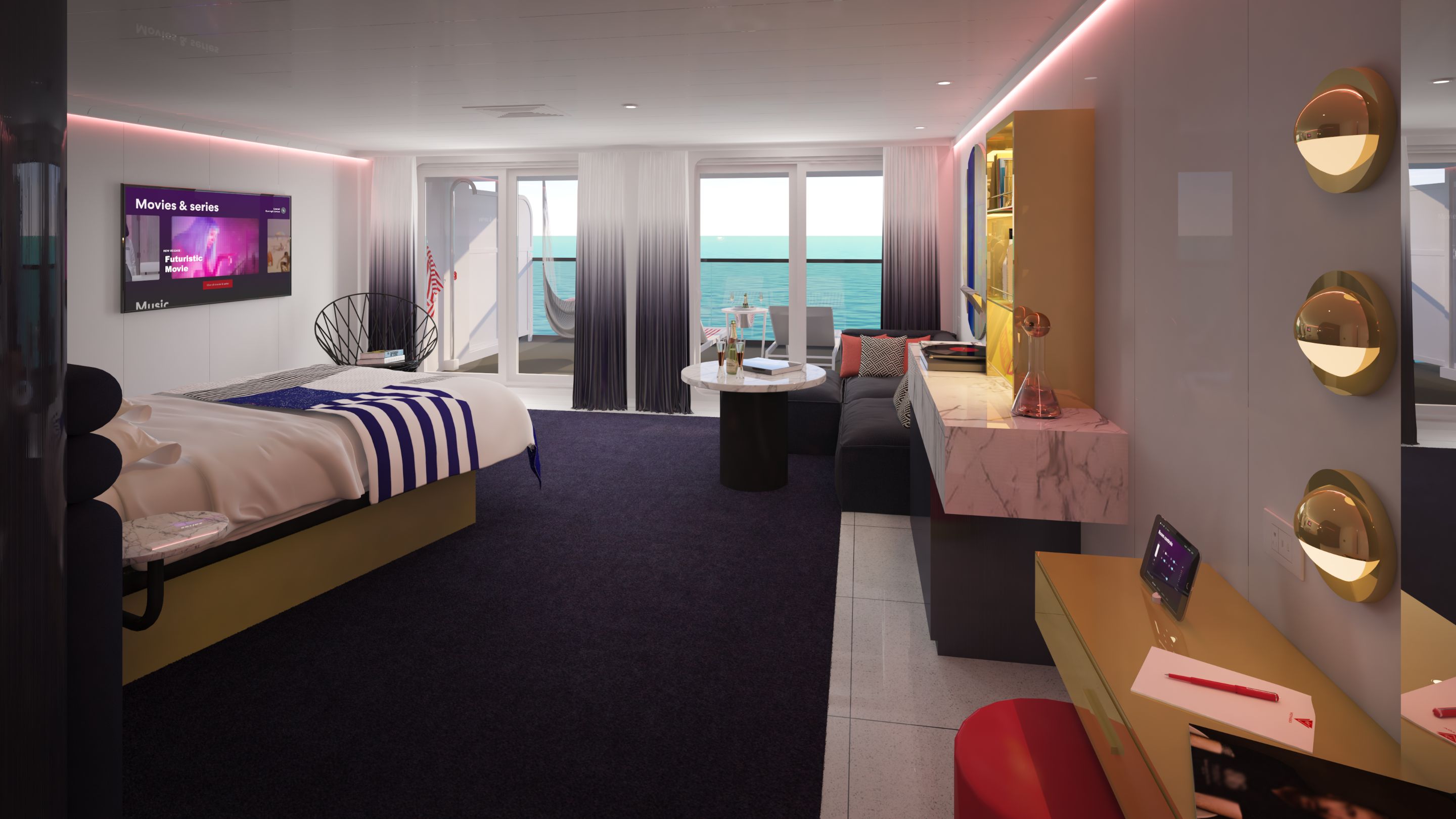 Is the Caribbean sun making you sleepy yet? This ship has got you covered, in your cabin… There are 5 cabin types from an inside cabin to palatial RockStar Suites. No matter where you choose,  you’ll have the power in your hands to transform your room at the touch of a button. Mood lighting, a configurable Seabed and in-cabin tech come together to make your life just a little easier. So cosy up, choose a film on your tablet and cast it to the TV. 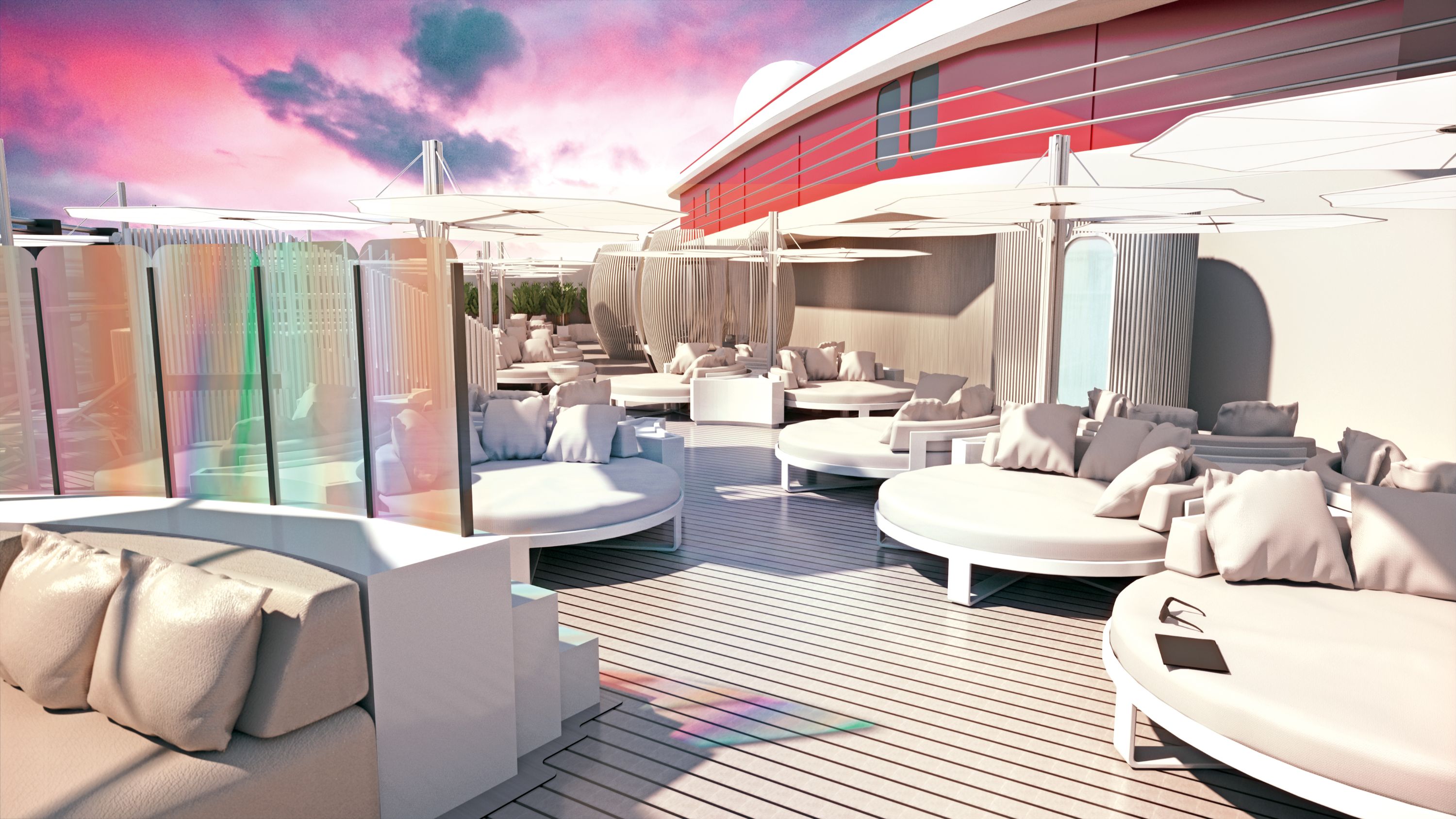 RockStar Suite guests will be given backstage access for RockStar Suites Sailors at every corner, with early access to onboard entertainment, access to Richard’s Rooftop (think members club meets chic outdoor lounge), restaurants, a private transfer to and from the ship in Miami and an exclusive express VIP pathway to the ship during embarkation. RockStar Suite guests will also have their very own wardrobe team to help unpack and repack, complimentary pressing service and nightly express swimsuit drying service.

One major turn-off for me personally about traditional cruising is the ubiquitous buffet. Branson has thrown this rule-book out the window and introduced 20 restaurants on board. We think these may be our favourites: 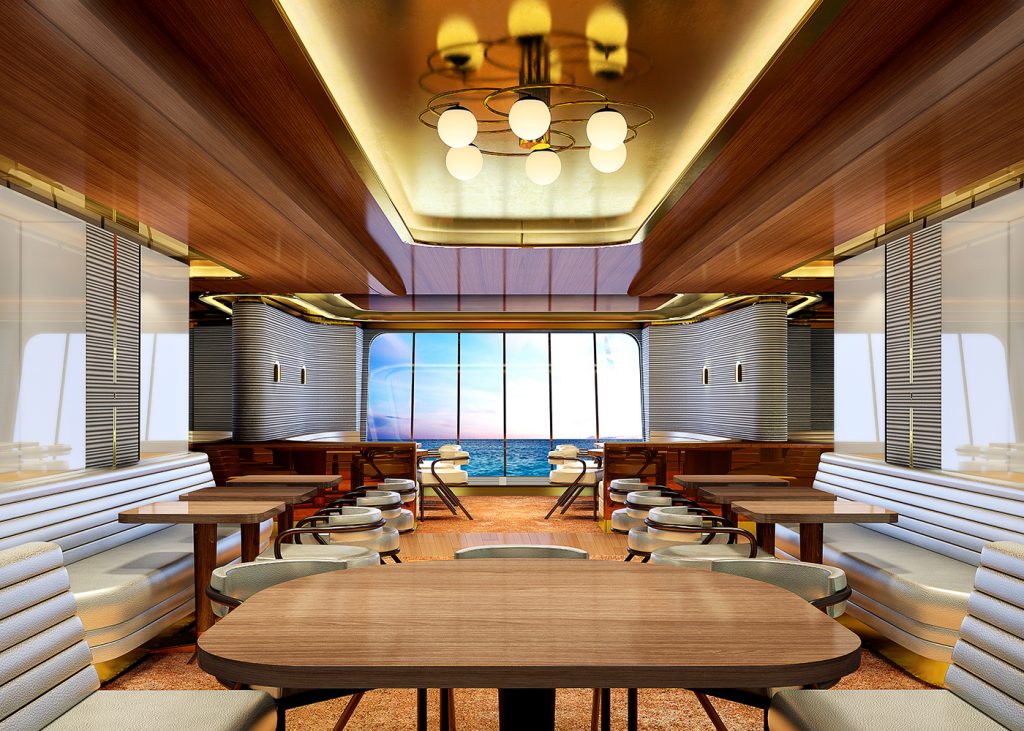 WAKE: Designed by Roman and Williams, Wake offers sailors a dramatic view of the ship’s wake. Serving a theatrical take on steak and seafood, Wake is the most glamorous restaurant on the ship, with a dramatic grand staircase entry. 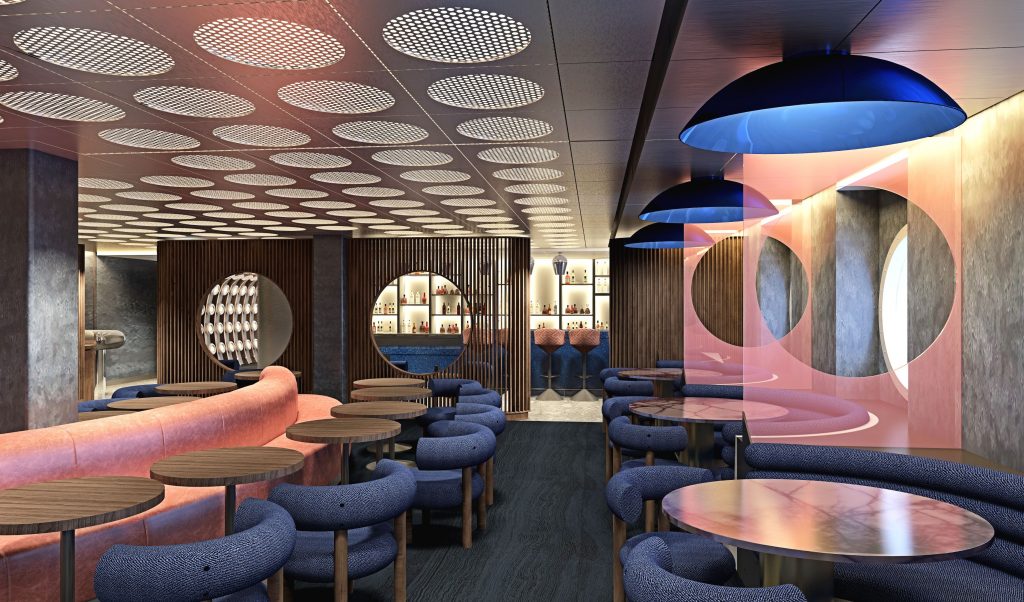 PINK AGAVE: This smart Mexican will have a wide variety of Mexican classics including tlayudas, memelas, sopes, tortas, esquites, tamales and an expansive array of smoky strong mezcals. 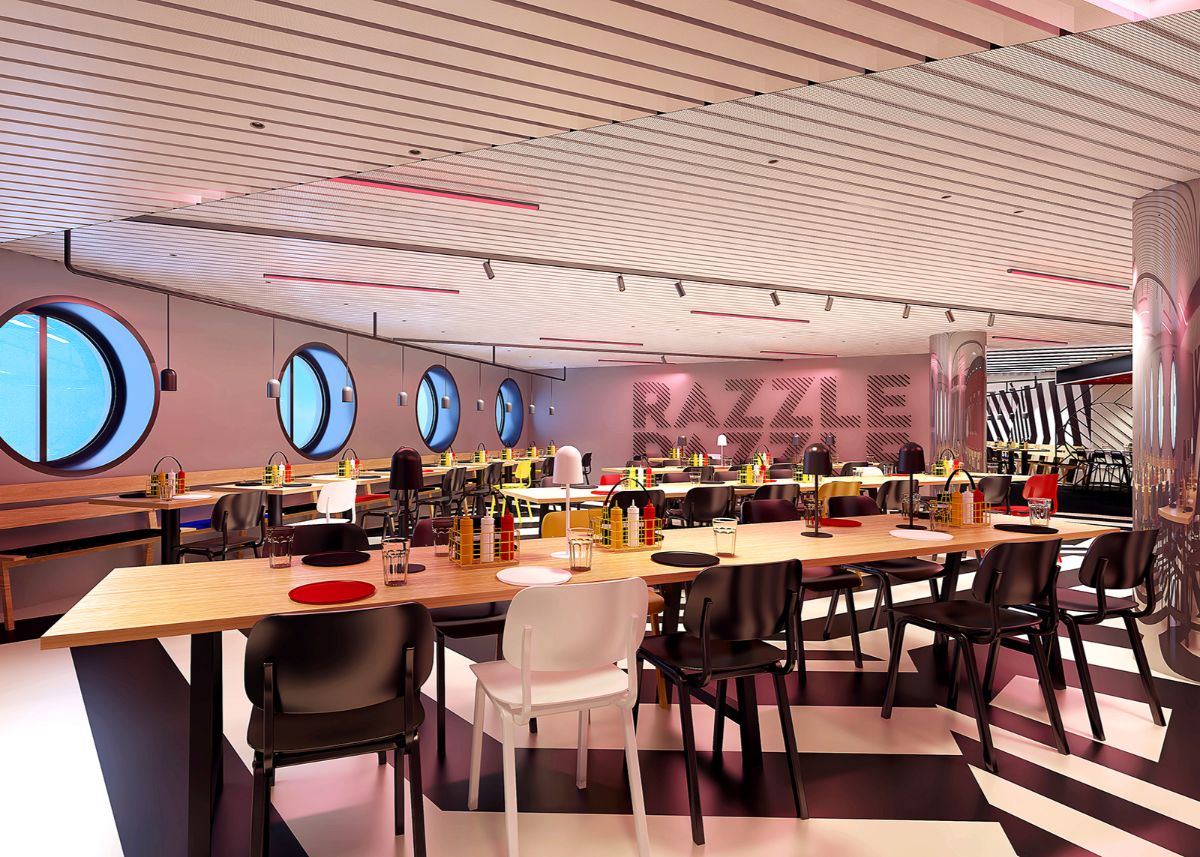 RAZZLE DAZZLE: With an interior scheme that nods to the glamorous, the inspiration came from the bold camouflaging of ships in WWI using patterns of black and white paint. Expect vibrant and creative twists on vegetarian fare and a juice bar, but there are also meat options! Also, expect some brunch time drag, I think the clue was in the name!

That was all too much. Can we just chill out please? Absolutely … 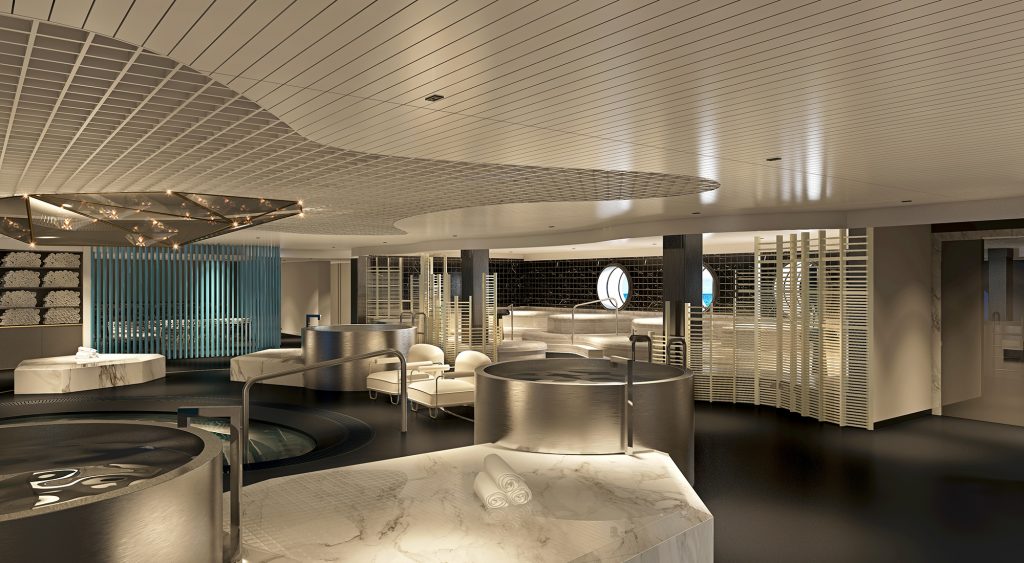 REDEMPTION SPA – This hideaway is the epitome of chill with a hydrotherapy pool, mud room, salt room, cold plunge pools, quartz beds, and rejuvenating spa treatments. By night, sailors can complete their well-being journey by attending one of the voyage’s evening spa parties where a DJ will transform the spa’s thermal suite into a mermaid hideaway extravaganza. 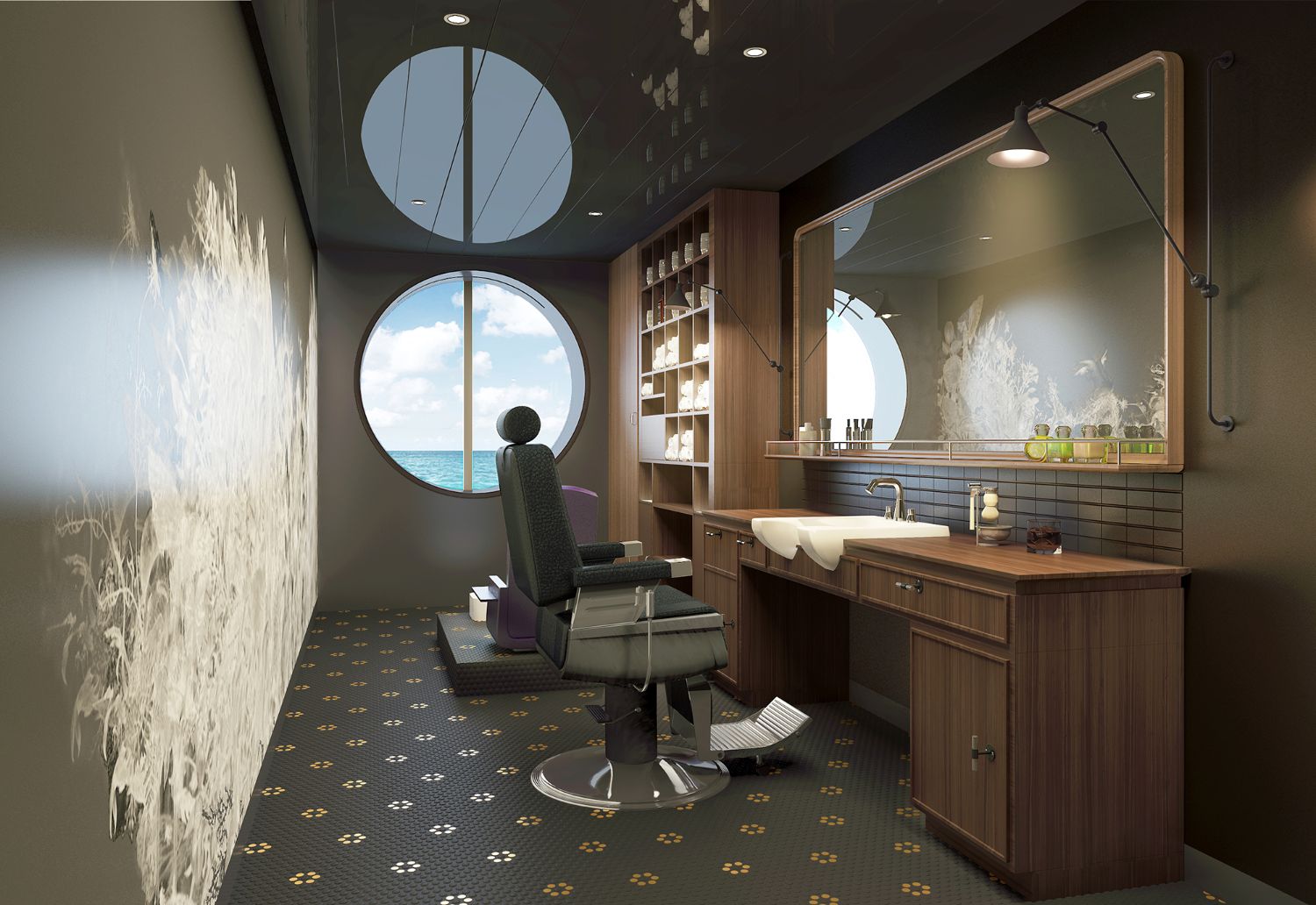 The Scarlet Lady: Other spaces on board

With 17 decks, there will be a lot to do but these are our picks for now: 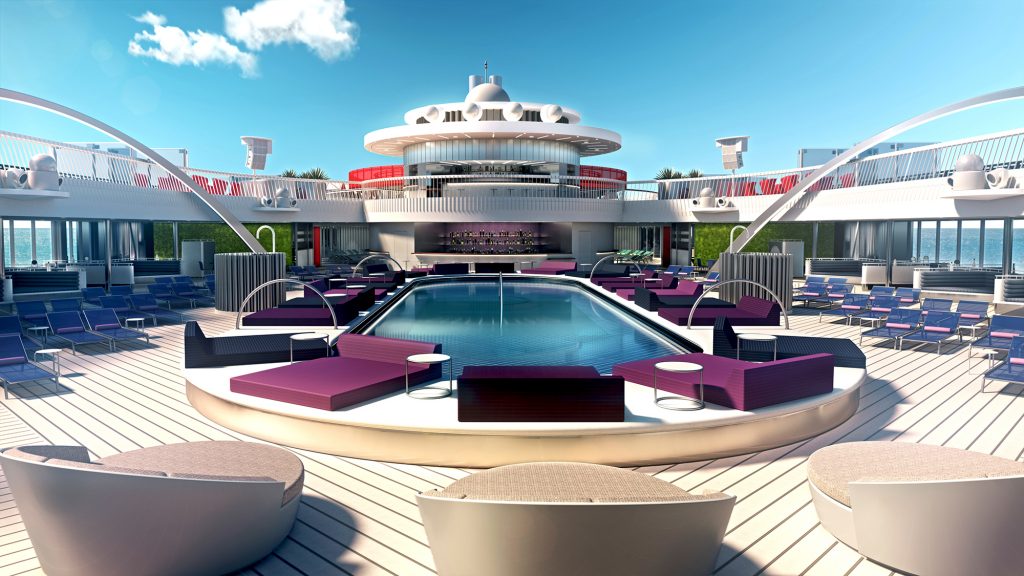 THE DOCK – an outdoor lounge designed by Roman and Williams, with a focus on relaxation, chillaxing and an appreciation of the gorgeous views the ship provides. 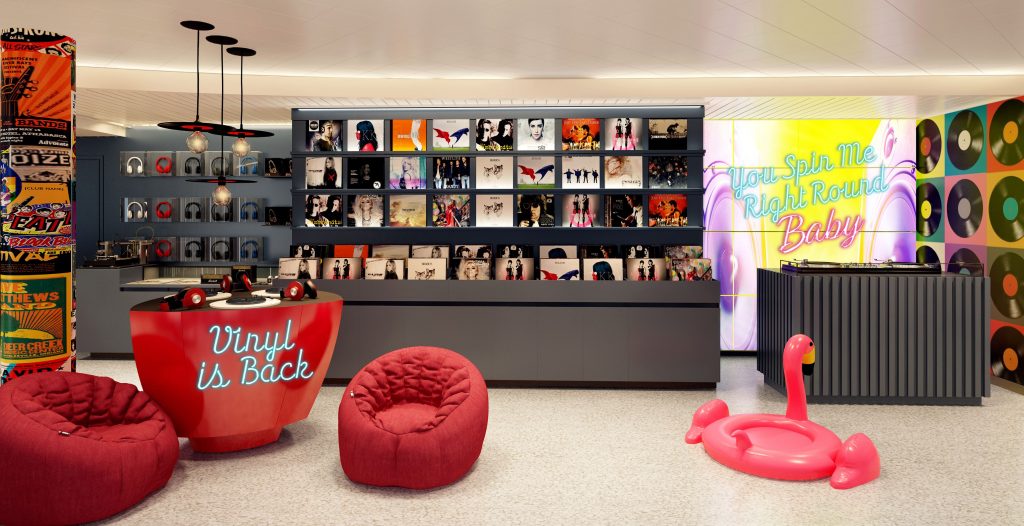 THE MANOR – the signature nightclub also designed by Roman and Williams, inspired by Richard Branson’s history in the music industry and his first ever Virgin music studio of the same name.

ATHLETIC CLUB – is an expansive space designed by Concrete Amsterdam. Inspired by New York sports clubs of the 1920s, the space features oversized gaming for outdoor adult play, the largest daybed at sea, cabanas for relaxation, a sports bar for socialising post-workout and more.

The Scarlet Lady: The Beach Club at Bimini

This exclusive 4.5-acre beach club on the island of Bimini (in the Bahamas) will be exclusive to those who sail Scarlet Lady and cascade down to the sea with an expansive lagoon-style pool as the central anchor of the club. Also, it’s not a private island so there is also the option to explore other parts of Bimini.

The atmosphere is very much chill and relaxation by day and then fun and frivolity by night. Scarlet Lady will arrive early in the morning and stay later into the night to take in Bimini’s night time vibe.

Sailors, are you ready now?

The starting port for Scarlet Lady is located in the Sunshine state of Miami and from there you can choose to point the compass towards the Caribbean and Mexico, the choice is yours. What we really get from Virgin Voyages is proper pampering and a real sense of fun in everything they do. Look out for a full review feature of Scarlet Lady in the next few months.

To discover more and sail away, visit: www.virginvoyages.com