London’s very first Michelin-starred Indian restaurant, Tamarind Mayfair, returns after an eight-month hiatus with an impressive refurbishment.  Since then, it has doubled in size so we dropped by to see if it can reclaim its crown in its new guise.

If you walk to Tamarind from Green Park station, you’ll pass a blue plaque on a bookshop on Curzon Street.  You’ll see it commemorates the time Nancy Mitford spent running the famous Heywood Hill bookshop while the male staff were away at war.  One can’t be sure, but it seems unlikely that she had the tandoori oven in mind when she wrote it, but the woman who said, “Oh darling, you know I don’t know how to take things out of ovens, one’s poor hands….” would have thrilled at the range of spears, skewers and rods hanging along the boundary of one of the open kitchens in the lower ground floor at Tamarind. 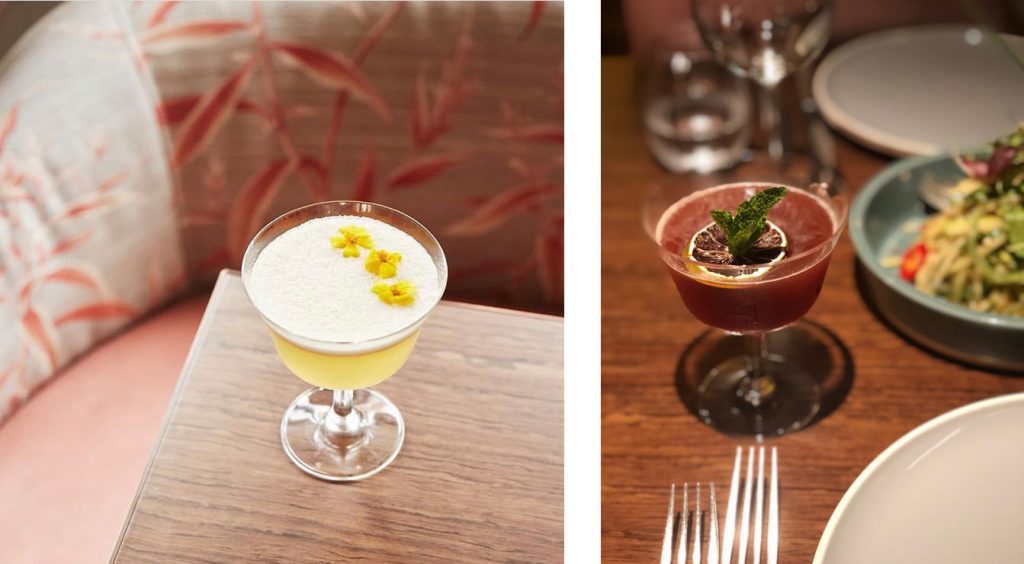 Our sofa of crushed coral velvet afforded us a ringside view of the action as a team of chefs moved between the baskets and bowls of fresh ingredients and the half dozen sunken tandoor ovens.  Well, that was my view anyway – my companion had a view of the bar, which is probably why she reached for the cocktail menu shortly after we were seated.

The short drinks list – nine cocktails and three non-alcoholic options – showcases a range of house specialities; each a classic recipe with a subtle Indian twist.  Some wear their twist lighter than others, with the rum, falernum, pomegranate and mint of the Bengal Punch, for example, ensuring that a Caribbean flavour also came through along with the patchouli and kokum of the subcontinent.

Across the table, however, the Indian influence was dominant in the Zaffran Gin Fizz; a herbaceous combination of gin, saffron and cardamom which fizzed on the tongue for a second before the orange flower, lassi and lemon soda guide you to a pleasingly bitter lemonade finish. 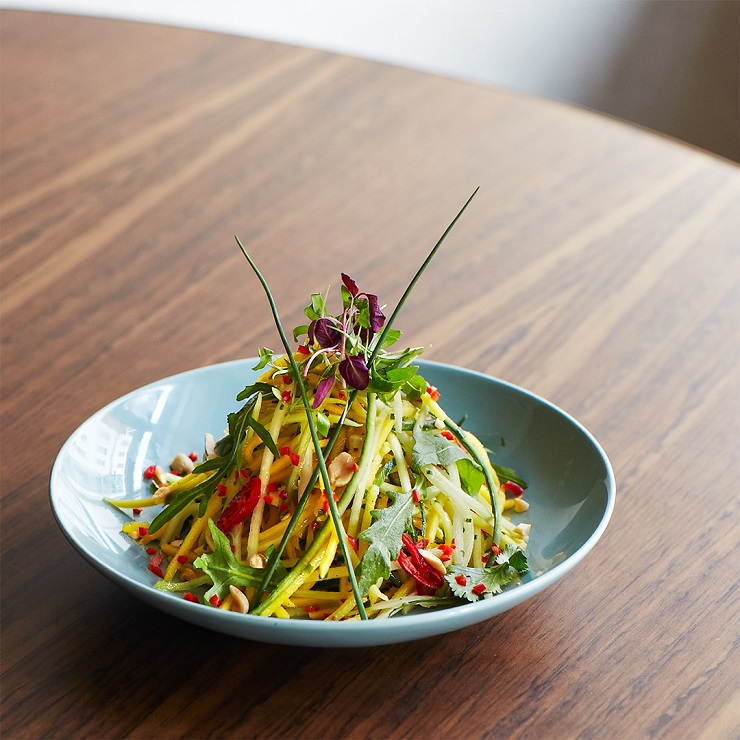 We were but a few sips through our first drinks when our attentive host arrived with a tasty fresh heap of shredded tropical fruit and cucumber.  This most virtuous of openers was tangy and zesty, carrying a little bite from the sharp mango dressing and some extra crunch from a handful of toasted peanuts.  It was demolished within mere seconds and followed by a pair of plump coiled Konkan prawns.  Their meaty, sinuous flesh carried a sweet spiced flavour and the long-lingering burn of the tandoor on their charred tails.

By this stage we tried two glasses of the sommelier-recommended Faugères that accompanied two Scottish scallops in shell-saucers of creamy coconut.  While this first red wine felt a little flimsy against the rich spice of the grilled appetisers, it did provide some respite from the battalion of flawless flavours marching their way to our table, with the softest of tandoori quail following in the shell-print of the scallops. Somehow the combination of rich gamey quail meat and chilli and gooseberry marinade combined to produce a sweet flavour of fresh honey, and the almost marmalade-like garnish of orange peppers played well alongside the glistening parcels of game. 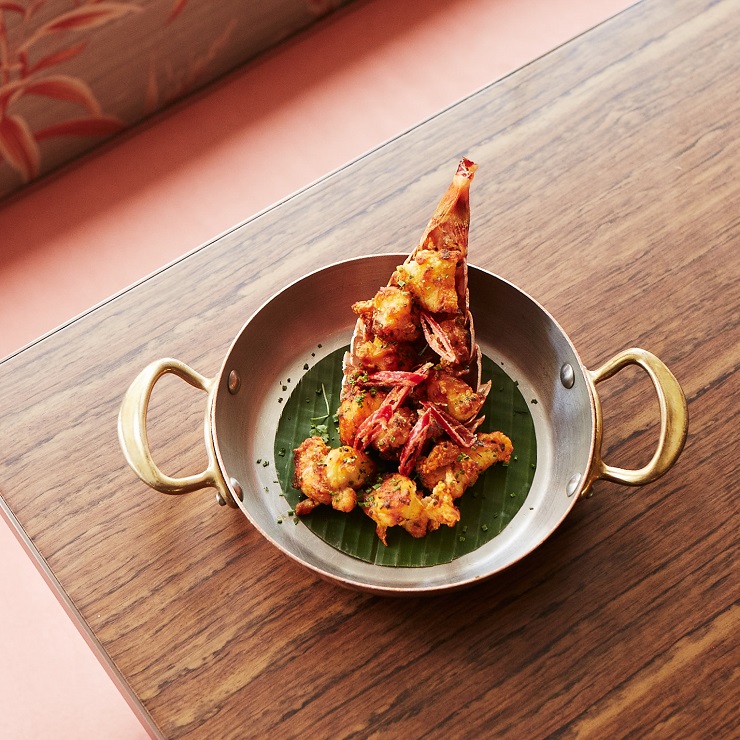 Our final small dish was a split lobster carcass with tight coils of breaded flesh spilling out of the tail.  A fine glaze of chilli jam had been applied and the meaty texture of the fish fought through the crisp crunch of the breaded coating, which made this dish feel like the most decadent way of seeing off such a revered crustacean. 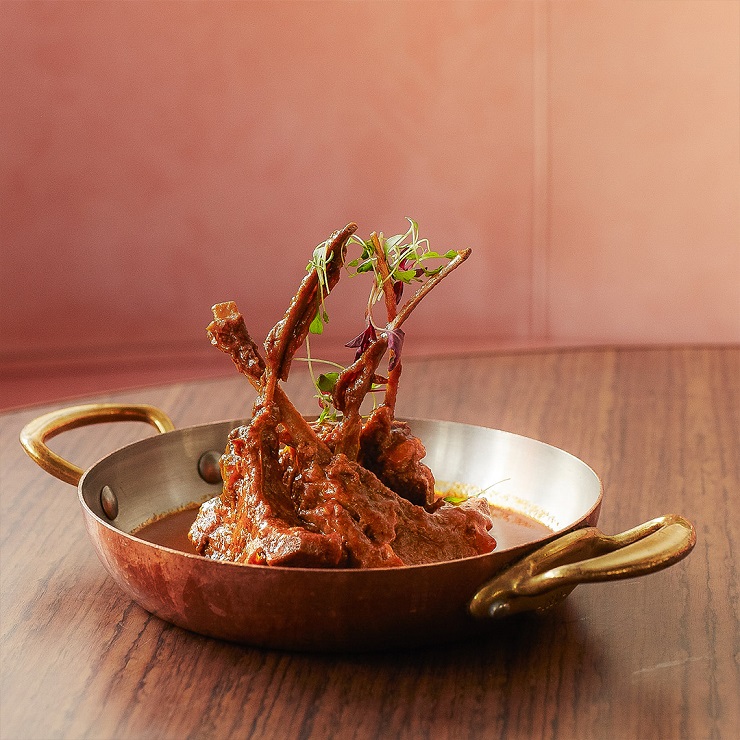 After a relay of small plates and dishes from the grill, we were enthralled with the rich variety of flavours and textures. The main course of Kathiyawadi lamb curry used an osso bucco cut of lamb which ensured that the richly flavoured meat fell cleanly from the bone and splashed lightly into the mud red sauce.  A mouthful of lamb with a stab of rich Marwari bhindi – the stir-fried onion and okra firm and crunchy against the melt in the mouth delicacy of the lamb – was an inspired combination.

After this, and despite the protestations of my stomach, it was impossible to resist the lure of the coconut rice, the creamiest of puddings with thick rolls of coconut flesh and a fine, sharp guava sorbet. 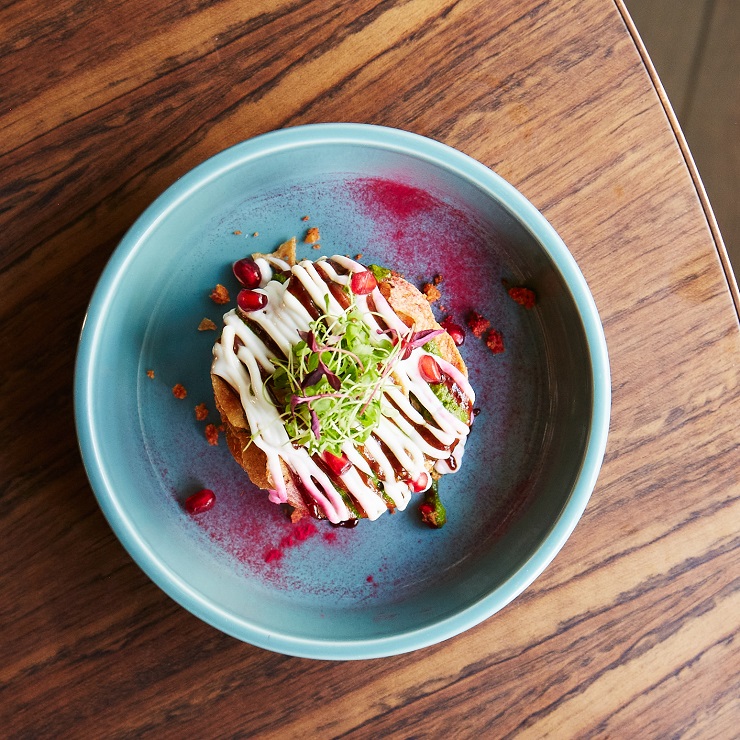 A restaurant that closes for long enough to renounce its coveted Michelin star knows it is taking on a risk.  That risk increases when you double in size and try to apply the same formula to a two-storey building that holds 150 hungry guests.  Fortunately for head chefs Karunesh Khanna and Manav Tuli, despite the potential for growing pains, Tamarind continues to live in a world of richly deserved superlatives.

To book a table, visit: https://www.tamarindrestaurant.com/