A day with Porsche cars in Berkshire: Fine thoroughbreds with four wheels

Full disclosure – I’m not a petrol head, I don’t own a car, I get around London using taxis, the Underground, and the occasional electric bike. But let’s be honest, who wouldn’t want to be behind the steering wheel of one of the brand-new Porsche cars in the Ascot countryside?

I enjoyed a Drive Day in August with Porsche in sunny Sunningdale. I meet the Porsche team over a coffee at the stylish Season’s Kitchen where they explain the day’s event. The plan is to drive three cars over the course of the day, stopping for a spot of lunch. The car’s satellite navigation system or PCM (Porsche Communication Management) is pre-programmed with several different routes through Ascot and Sunningdale. Each route is approximately an hour’s drive. There are several cars available, consisting of four models: Cayman, Macan, 911 and Cayenne. The cars are lined up like a beauty pageant in the nearby carpark, sparkling in the morning sunshine.

Before my first drive, I meet some of the other attendees who appear to be serious car enthusiasts. While I’m not completely new to sports cars, having driven a Ginetta G55 GTA on the hallowed circuit of Silverstone, I’m no Jeremy Clarkson. The conversation quickly turns to gearing, cylinders, power-to-weight ratios and what seems like random three-digit numbers representing car models.

I take James Lewis-Barned, the Porsche Press Officer to one side, and I quietly reveal to him my non-geek status. He reassures me and tells me that it’s perfectly fine. At Porsche, they welcome drivers with varying levels of interest in cars – from thrill seekers to those that are looking for the everyday practicalities of having a car. This includes those like me whose primary concern is ensuring that a car has sufficient boot space for the weekly shop at Waitrose. 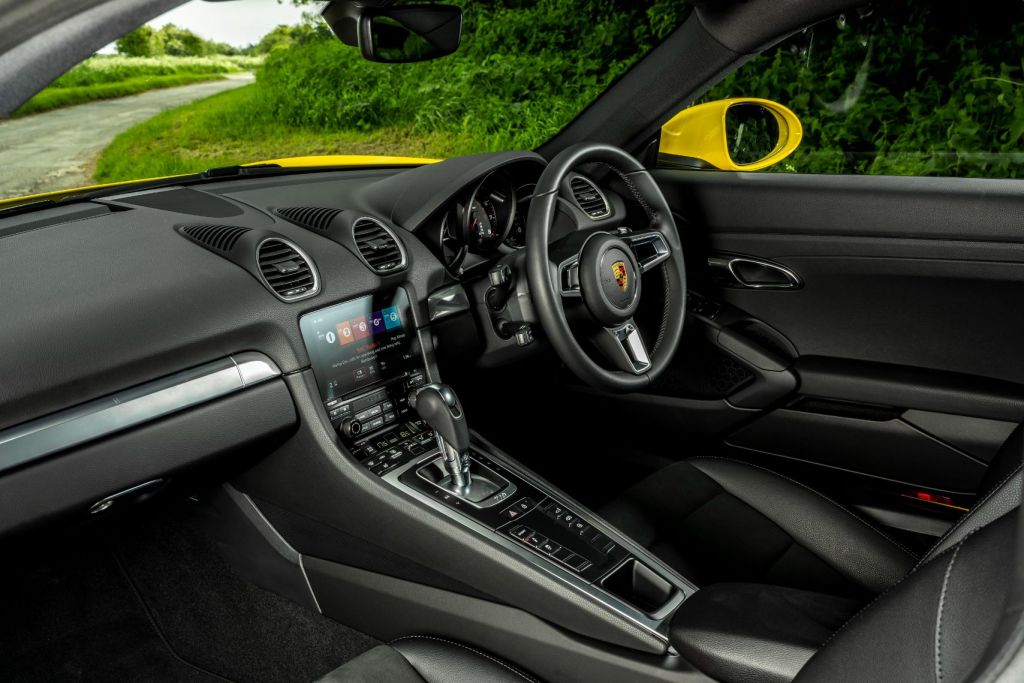 James decides to start me off gently with the 718 Cayman in Racing Yellow. It’s a mid-mounted engine roadster and based on one of the classic Porsche cars 718, which was launched in the late 50s. It’s the entry level to the Porsche range of cars. Its sleek stylish design and broad rear is unmistakably Porsche. It’s a lighter car when compared with other models like the 911. Inside you have a sports cockpit with various drive settings including a switch for the sport dampeners. It also has the option to use the finger paddles for gears should you want to emulate Lewis Hamilton on your drive to the local farmer’s market. After taking care of all the paperwork, James starts the ignition and goes over the display console as well as the navigation system. I’m all set to go; a sudden surge of excitement comes over me as I pull away from the parking area and follow the exit sign. 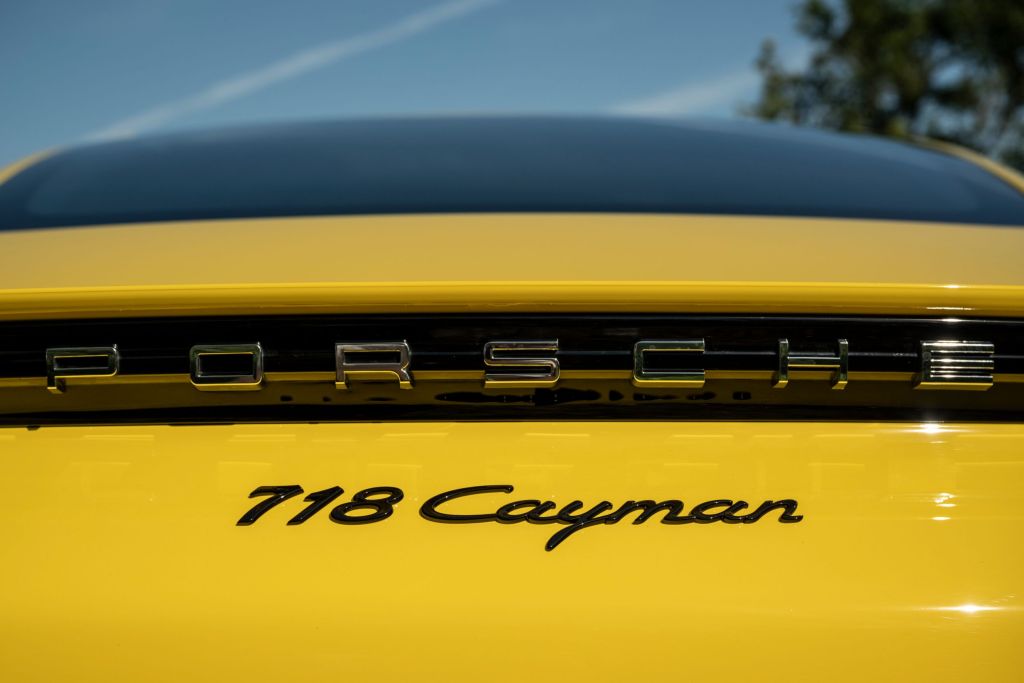 I can see why Porsche chose Ascot for the location of today’s event – the area has many winding country lanes. It feels rather cathartic driving on these scenic routes while I get used to the car and its controls. The gentile experience quickly turns to sheer exhilaration as I press the sport button; this feature sets the suspension to a firmer drive. You can feel how responsive this car is by pressing the accelerator down hard. Woo-hoo! Experience its power, nimbleness, and its precision as it sticks to the road like super glue around bends. You can really hear the roar of the four-cylinder engine located behind you. The leather steering sports wheel has a great grip, giving you confidence and control. 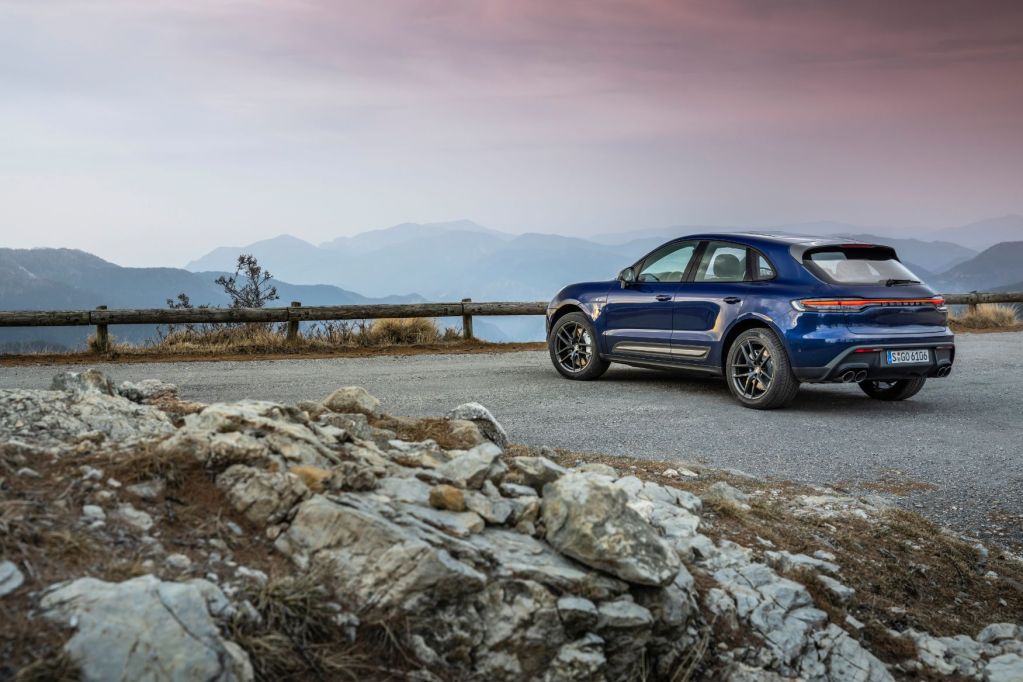 Next on the drive list is the newly launched Macan T (the “T” stands for “Touring”) in a striking Shark Blue; it’s the smaller cousin of the Cayenne. It has a four-cylinder engine, but unlike the Cayman, the engine is in the front. The Macan is considered the sports car of compact SUVs for good reason. It has a characteristic slopping roof line which provides its sports car contours. It also has a grey front apron with matching mirrors and slide blades, which sets it apart from the conventional Cayman. The SUV comes with many of the extensive equipment as standard over the standard model. There’s a lovely little feature to open the rear boot; press a small button directly underneath the rear wiper shaft to operate. I was impressed with the large boot (458litres), useful for day trips to Calais to stock up on your Duty-Free. 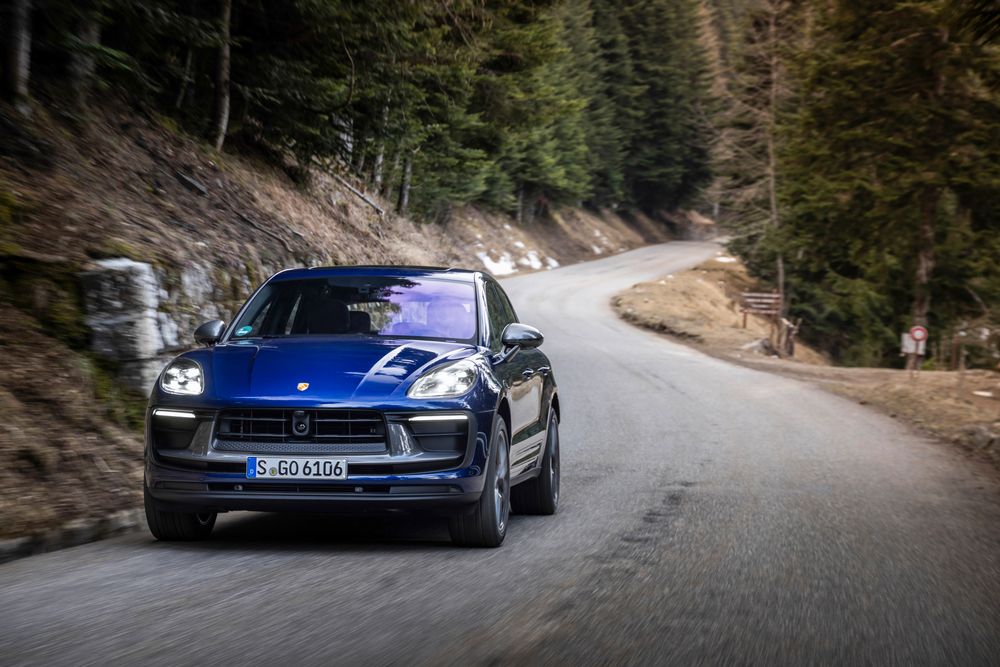 Like the Cayman, the Macan T also has a similar sports cockpit and leather steering wheel. The quality of the interior such as the leather seats is exceptionally high as one would expect of this luxury sports brand – it feels reassuringly expensive. I like the familiarity of the cockpit with all the Porsche cars. It makes it easier to switch from one car to another. Also, being an SUV makes it much easier getting in and out of the car. The Cayman has the added advantage of having rear seats. 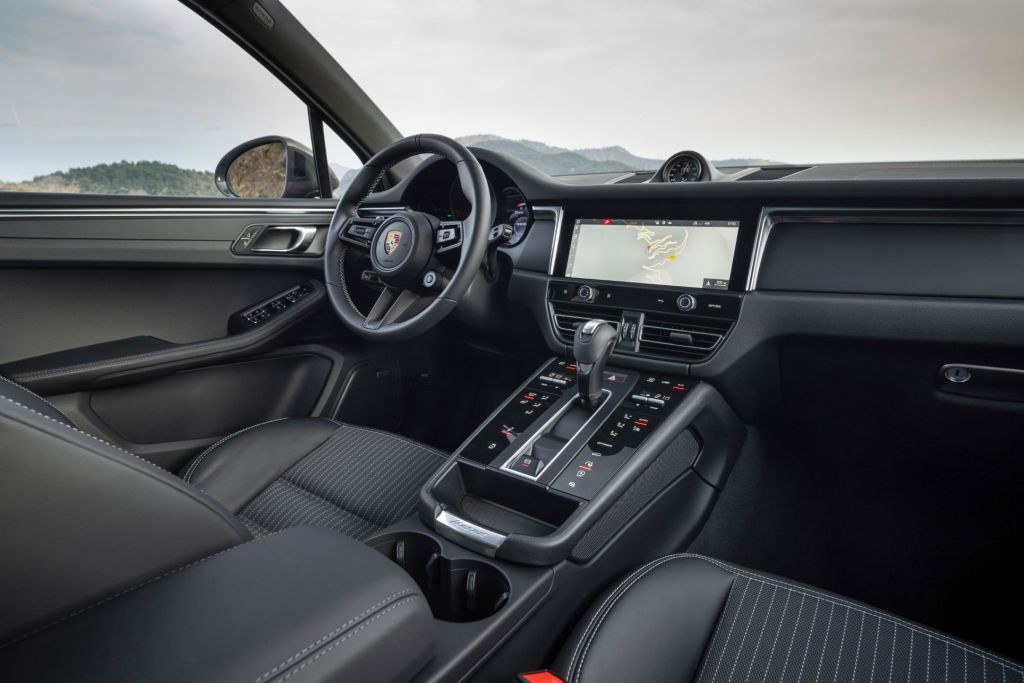 So, what is it like to drive? The first thing you notice when you sit in the driver’s position is how solid the car feels. There is a ‘Sport Plus’ mode which activates firmer suspension; it transforms the ride and handling, being able to take sharp bends with considerable ease. The drive is smooth even to the sound of the angry growl of the engine. 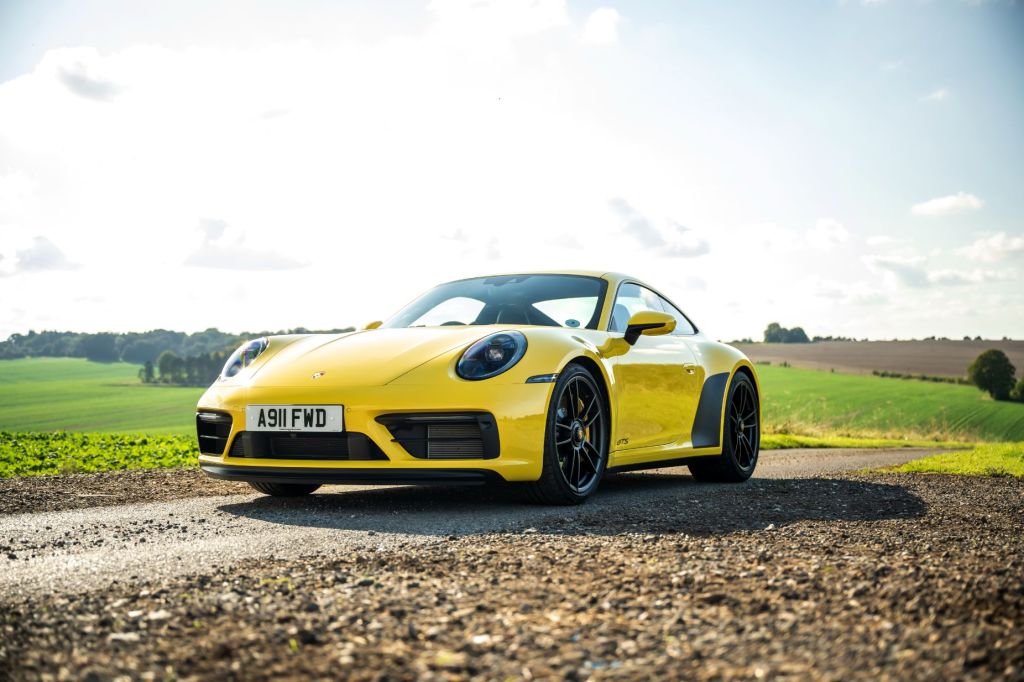 After a light lunch it’s time for the final drive of the day – the mighty 911 Carrera in striking Racing Yellow like the Cayman I drove earlier. The suffix “4 GTS” refers to this being a four-wheel drive with enhanced performance – to the layperson, it means extremely fast. The eye watering performance is delivered by its twin-turbo, 6-cylinder rear engine.

The 911 is one of the most iconic sports cars in the world. The poster of its image has adorned teenagers’ bedroom walls since time has forgotten. Its timeliness design evokes elegance, style, and power. The shape has evolved since the original 911 first emerged in the early 1960s. This new 911 embodies the Porsche DNA: the flyline, low roof, long flat bonnet but also includes modern features like the continuous rear LED light strip. 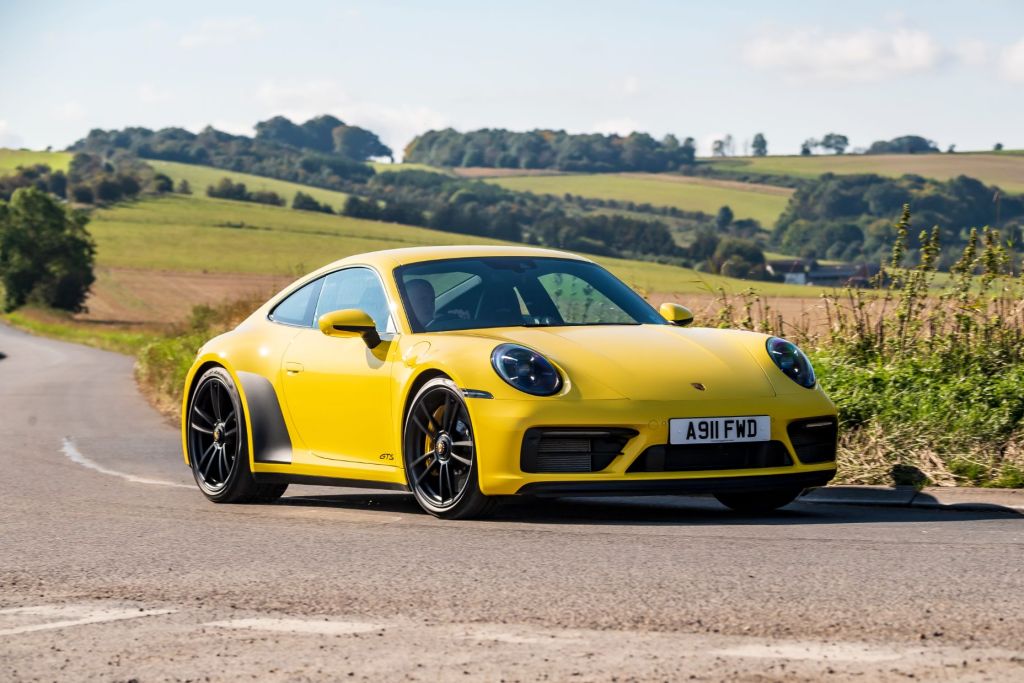 As you sit in the car with its low driving position, you can clearly see the cluster of instruments on the dashboard. The main instruments are analogue such as the rev counter, which is in keeping with the car’s long tradition. The electric bucket seats have a memory function that remembers your perfect seating position. The Porsche Communication Management (PCM) provides access to the navigation system, media, and climate control. The PCM also has an intelligent voice recognition system that allows you to ask your 911 for information such as what time a restaurant closes or the weather forecast. The GT sports steering is wheel is sturdy yet feels different to the earlier cars I had driven. This steering wheel is more tactile. The luggage compartment has a capacity of 132 litres. 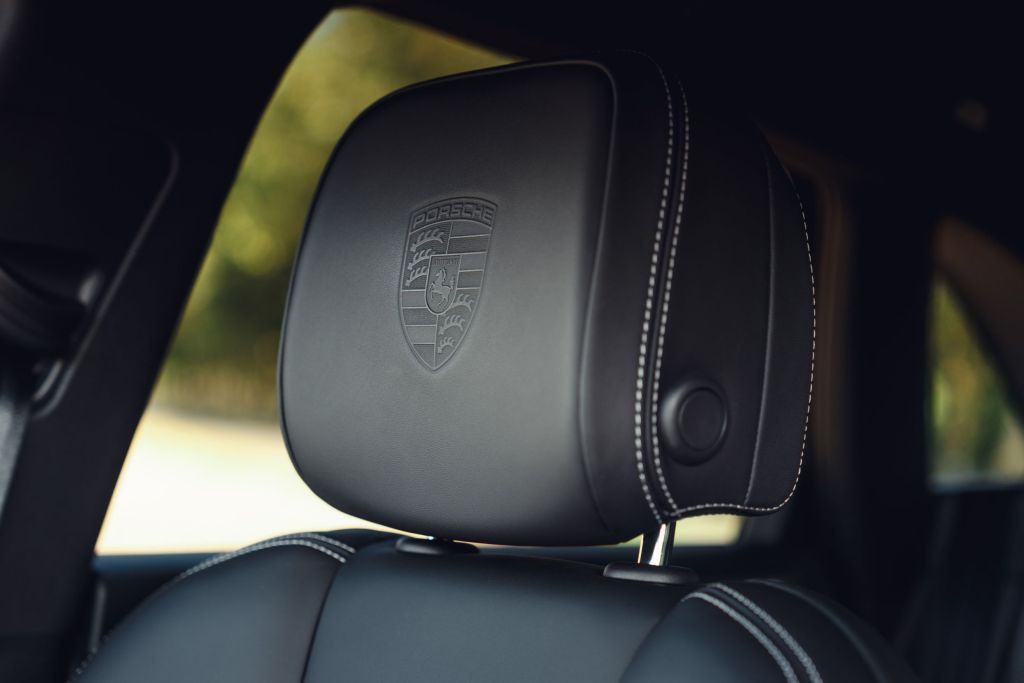 The 911 is an absolute joy to drive. I would go as far as to say that It’s impossible to drive the 911 without a constant smile on your face. The car comes with some unique features, including Launch Control. This electronic aid allows the car to accelerate from a stationary position. You put one foot on the brake, with the other pressed down hard on the accelerator. As soon as you release the brake pedal a light appears to inform you that the feature has been activated. The G-Force that is felt is quite incredible. It’s beneficial use outside of a racing circuit may well be limited. It is however, reassuring to know that you can leave that ache-ridden wanabee racer next to you for dust at the traffic light, should the need arise.

Having a selection of cars to drive and choosing a favourite is like Woolworth’s Pick ‘n’ Mix. You may try the various chocolates available, but there is only one clear winner. That’s right, the 911 is equivalent to the delicious milk chocolate filled with hazelnuts and rich caramel in the purple wrapper, but in racing yellow instead.

The Porsche 911 has reinvigorated my interest in cars. It’s fun to drive, looks fantastic, turns heads, and can hold my shopping. What more can one ask for?

All imagery courtesy of Porsche Cars.