The Aston Martin DBX707: Goodwood meets the beast of Britain

Aston Martin is one of the most iconic British names in motoring history, having developed some of the most beautiful cars on the planet and, thanks in no small part to a certain fictional MI6 agent, has become a household name. Those two words conjure up class, style, sophistication and probably the colour green. British Racing Green. I’ve been very lucky over the years to get my hands on some pretty naughty 4-wheel barnstormers, but I’m yet to sample the hallowed 4 wheels of DB, so when offered a chance to investigate the new DBX707 I jumped at the chance.

The idea that I should then take it to Goodwood Festival of Speed, one of my favourite motoring events seemed like Santa Claus had knocked on my door and said he was focusing solely on me this year. Goodwood and Aston Martin seem like a marriage made in heaven too – both suitably aristocratic, elegant and high-end. This isn’t a car for an M4 blast to Bristol and back. 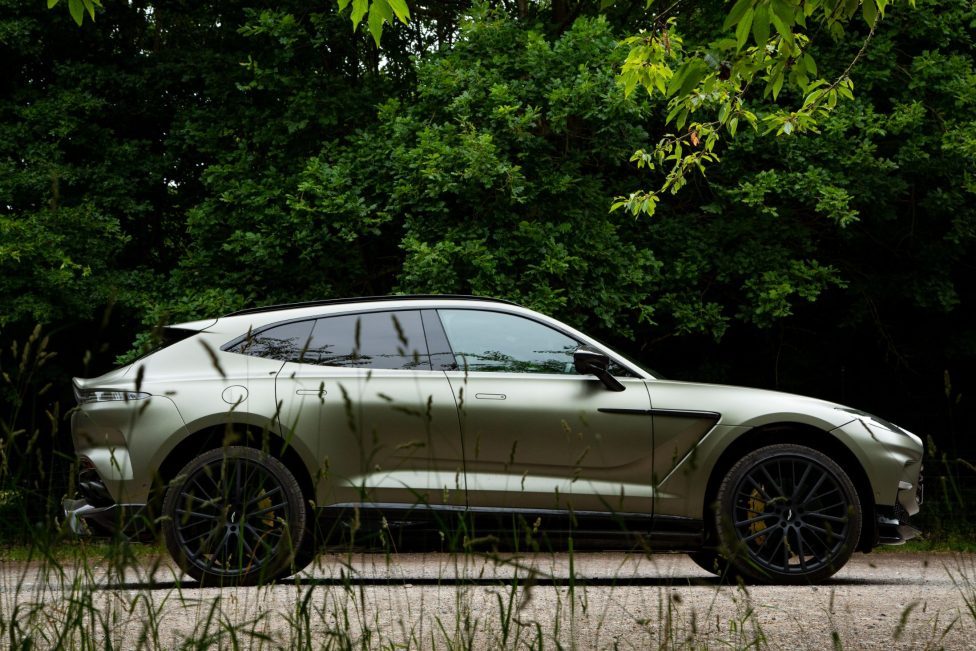 I’ve been angling for a DBX review ever since the luxury SUV entered the Aston Martin production line – a car said to hopefully save a failing company. Aston Martin Lagonda has certainly had its challenges over the years and the burgeoning SUV market seems a smart place to start to kick start the ailing brand. Instead of getting to grips with their entry level (I say that lightly as there’s very little entry level about it) I’ve found my way to the 707. It’s a car that all journalists will enjoy stating is the fastest, most powerful SUV on market. In fact, ever (this is until Lamborghini decide they can’t stand that so bring out a hyper version of the Urus. Or NASA build an SUV). For now, though, its top of the tree – an important statement for Aston as they push for brand visibility and aim to tie in their newfound Formula 1 presence, curtesy of Canadian Billionaire and owner Lawrence Stroll.

What’s in a name?

Aston Martin have always had clean and clear names (DB5,6,7,8 etc.) and this is no different. X is to acknowledge the off road, cross-purpose abilities of this jacked-up supercar. And rather frankly, with little modesty, the 707 is the ludicrous output of this nuclear reactor of a 4×4. 707PS or 697hp in the Church of England – I’m no engineer and the difference between all these measurements is rather baffling but I think the long and the short of it is that Tony Stark would be impressed. And what that leads to is earth shattering performance – for a supercar – let alone a 2 and half ton, 5 seat off roader that will happily tow a caravan and 2.4 Labradors in the boot. 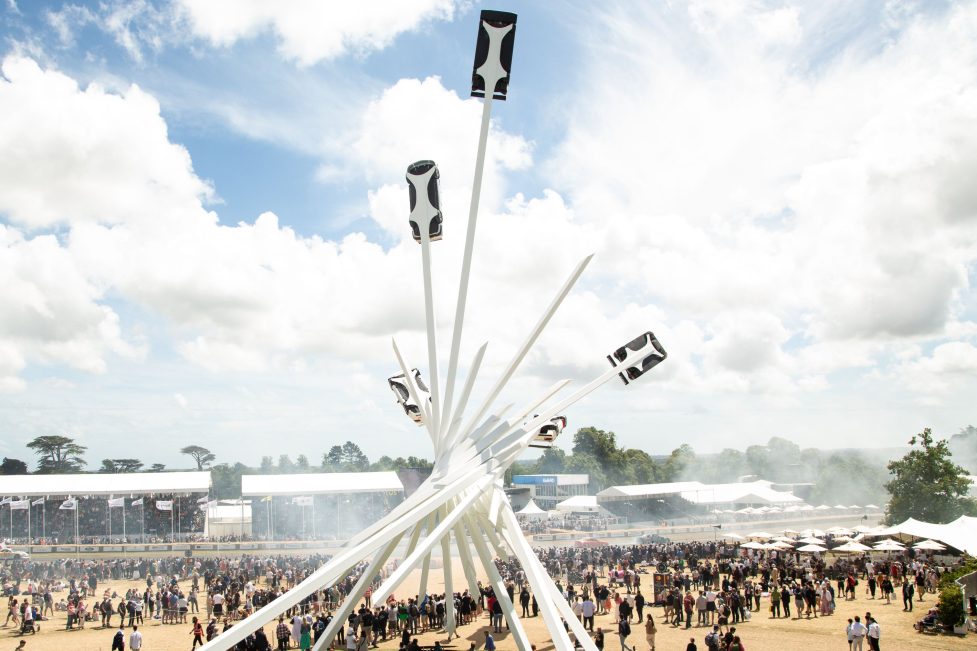 In terms of destination, The Goodwood Festival of Speed couldn’t be more suited to the DBX707 – it’s a weekend of vehicular entertainment and luxury food and drink – all set in the aristocratic grounds of the Duke of Richmond’s vast country home. It’s an event that’s been running for nearly 30 years and has become one of the most loved motor shows in the world.

An added benefit to such an event is that it’s situated in the bucolic West Sussex countryside, a stone’s throw from Chichester and the coast. Whether travelling from afar or just down from London there are plenty of lovely roads to enjoy, whatever vehicle you’ve chosen to travel in. In fact, the roads all around the area are a car spotters dream and it’s not unusual to see kids (and big kids) sitting outside their houses to watch the great and good whizz through the various quaint villages that litter the route.

Having collected my guest for the day (fellow petrolhead and old friend) on the outskirts of London, we made our way down South and used the time to get to know our 4 wheeled friend. First impressions from both of us was that it looks more than just a car – it’s an event to look at. It felt like it took me 5 minutes just to take it all in, there’s so much going on – the endless curves, angles, edges, spoilers, diffusers, carbon fibre. I love the look of this car.

I’ve often struggled with sports car companies adapting their styling to suit a big off-road car, but what I like about the DBX707 is that it feels like its own car that has the familial traits of Aston Martin, but isn’t just a swollen DB11 or Vantage. Instead, there are styling cues like the rear lip that echoes the Vantage or the trademark basking shark front grill. When talking SUV’s, size tends to matter and I was surprised at how massive it was. It’s huge. I drive a Mercedes GLE day to day, and this looks longer and feels bigger – which I don’t mind, it gives the car serious road presence. But where that feeling does a full U-turn is in the cockpit – the driving position and front seats feel lithe and tight and ultimately far more ‘Aston Martin’. It’s a bit like being Lara Croft on the inside but Thor on the outside (Hammer not included.) 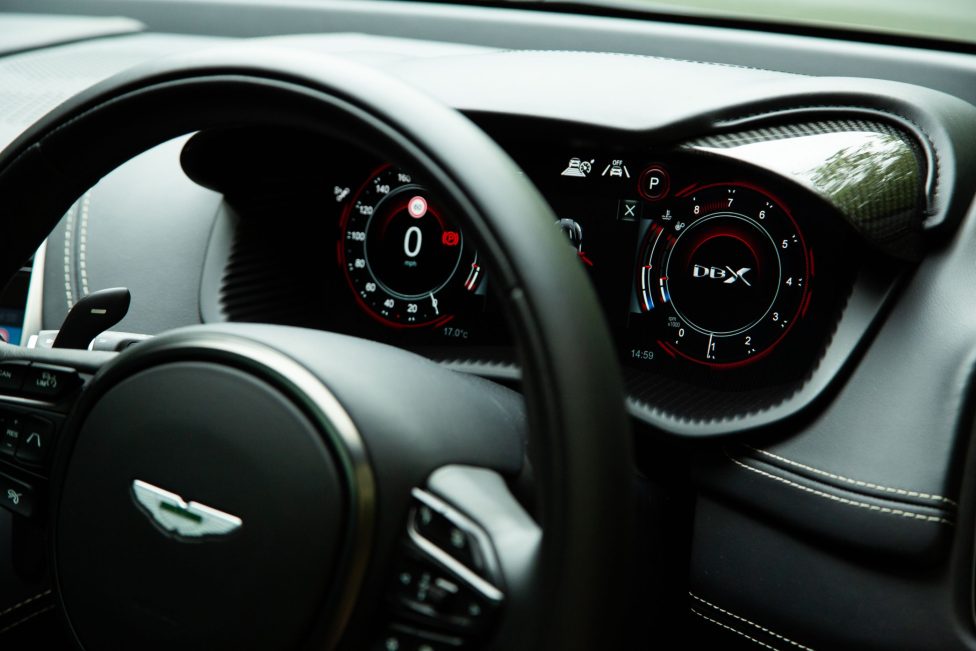 My only mild criticism is that the switch gear is a little dated in places and all too recognisably Mercedes-Benz. But it all works fine and doesn’t distract from the driving experience, its just that for nearly £200,000 I wouldn’t expect ‘fine’ – there isn’t even touch screen which seems a bit of a misstep for a car of this value.

After having whipped this monster supercar around the weaving B-roads of the English countryside we arrived at the famous Festival of Speed – thankfully bypassing the legions of motoring fans in the large public car parks and instead slipping into the ‘Aston Martin Parking’ – if The Royal Family had its own NCP this would be it. Gliding by Vantages and DB9s and 11s I pulled up alongside a line of DBXs assuming this was where we should park – it later turned out the DBXs there were shuttling VIPs in and out of the event, but I was welcome to leave it there all the same. It looked right. It looked good.

The Festival of Speed is a hell of an event nowadays and has become hallowed ground to unveil new cars, show off your highest performance vehicles and generally have a good time. It’s an unpretentious and fun, but serious, event. The fact, much like on the F1 circuit, that you can see DBXs zipping up and down the hill climb as marshal cars and security vehicles, makes it clear that Aston Martin Lagonda has pitched itself as THE brand for anything motorsport and anything high profile. It’s clever. It’s effective.

With the extensive Aston Martin hospitality enjoyed (less of the champagne for me than my guest sadly) we found our way back to the VIP pick up and drop off for our ride. This consisted of being picked up in a DBX to be driven back to our DBX – not a bad set of circumstances. Safely back in the matte grey super SUV we dialled in home on the sat nav and made our way.

The drive home was a hellish trip to be honest as we hit some unbelievably bad traffic, meaning that my friend was in danger of missing his Eurostar back to Paris – the last of the day. Usually this would just irritate me, but the MI6 pedigree of this brand only made me want to save the day, avert danger, go rogue and basically defeat the bad guy (in this case the A3 just outside Guildford.) 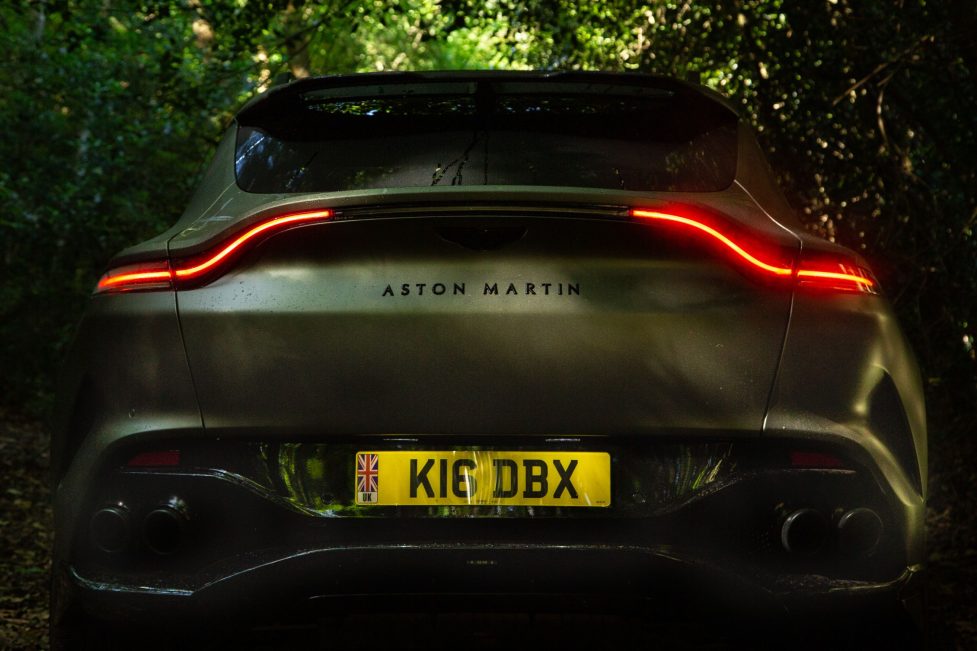 A quick look at the map and I felt confident that Google hadn’t seen an alternative route, so I took back control from the machines and dived off the motorway. What ensued was a very much enjoyed spate of quick corners, blasted straights, devoured speed bumps and the odd overtake. This car can really move, and the Fast and Furious soundtrack only added to the drama (the drama that I 100% invented in my mind.) After much excitement we re-joined the A3 barely one junction further into the traffic making almost no difference to our ETA but gosh it was fun. I could feel Google maps looking at me with a smug ‘I told you so’ but I didn’t care.

It’s easy to think with cars like this that a £200,000 price tag is a ridiculous idea for a large, 5 seat 4×4 and you’d be right, it is – but I think what’s a more salient realisation is that people happily spend that kind of money on supercars day in day out. From Ferrari F40’s to Lamborghini Murcielago’s or Pagani’s and beyond – and yet they are the most impractical and absurd cars on the planet. What we have now with the DBX707 / Bentayga Speed / Urus and others are supercars that you can take your kids to school in, rock up at the golf club, take the dogs out and still do 0-60 in 3.1 seconds or blast up to the 200mph mark. That to me makes a car like this a hell of a good idea. And dare I say, good value for money.

So, if you are one of the 0.1% that spends your days chewing over whether to get a LaFerrari or a Chiron then maybe take a look over here at the DBX707. It’s even got a tow bar, although it’s unlikely you own a caravan.

All imagery of the DBX707 / Goodwood courtesy of Nick Hendrix.