The Future of Sound: Dynaudio Focus

Whether it’s the handcrafted design and impeccable attention to detail, or the precise and exquisite sound quality, the new Dynaudio Focus range hasn’t missed the mark. I left thinking I can never listen to music in the same way again. The experience at Dynaudio has revolutionised the awareness I have towards sound and how it’s a necessity to own a luxury, quality speaker. And here is why.

Of course we all listen to speakers every day, mostly on our phones. However, there are vast contrasts in the minimal sound ingenuity that you can find in day-to-day speakers on mobile phones, for example; to the mind-blowing array of technology and craftsmanship involved in making a Dynaudio speaker. Believe me, the difference is shocking.

So, when we discovered Dynaudio would be releasing a new Focus Series, a family of fully active wireless stereo speakers, there was an audible excitement amongst everyone in the room, as we got to witness some truly unique sound in the country where it all began. 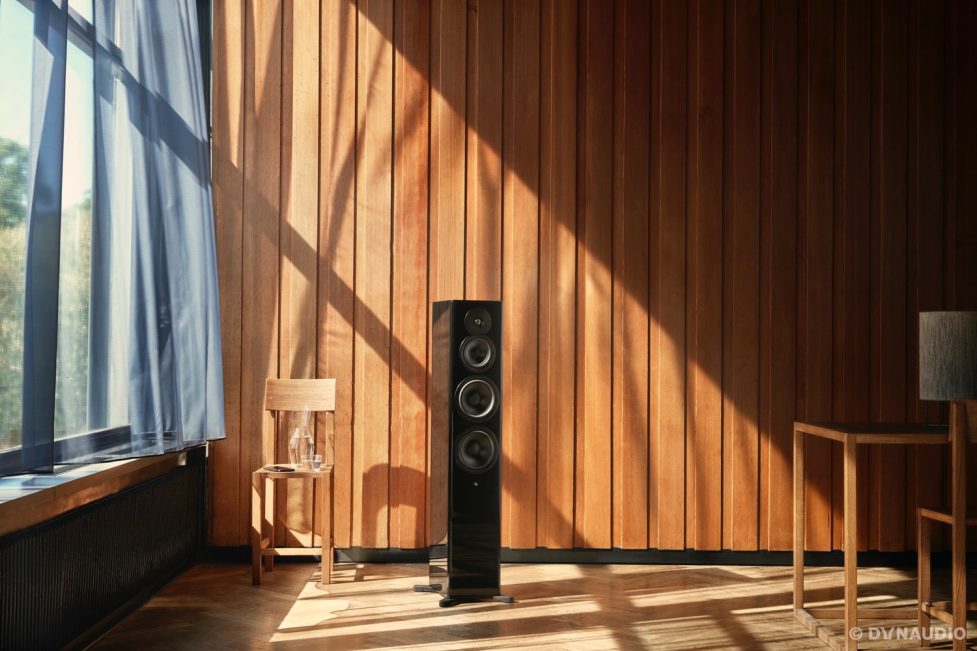 “Modern technology meets classic performance with the newest release, complete with cutting-edge features, a sleek finish, and an audio performance that is second to none.” Modernity and classic performance is what I think truly encapsulates the essence of the brand and the products Dynaudio makes.

There appears to be an emblematic similarity between the loudspeakers Dynaudio first made in 1977 to the wondrously advanced and beautiful-sounding speakers that are coming out of the Skanderborg factory in 2022. Dynaudio is a brand steeped in history, and the Danish manufacturer has paved the way towards a future of high-fidelity sound that continues to rock the audio industry in more ways than one.

Now in 2022, the Dynaudio Focus series offers three models: the Focus 10, Focus 30 and Focus 50 which are all available to purchase in pairs and can be finished in White High Gloss, Black High Gloss, Walnut Wood, and Blonde Wood. 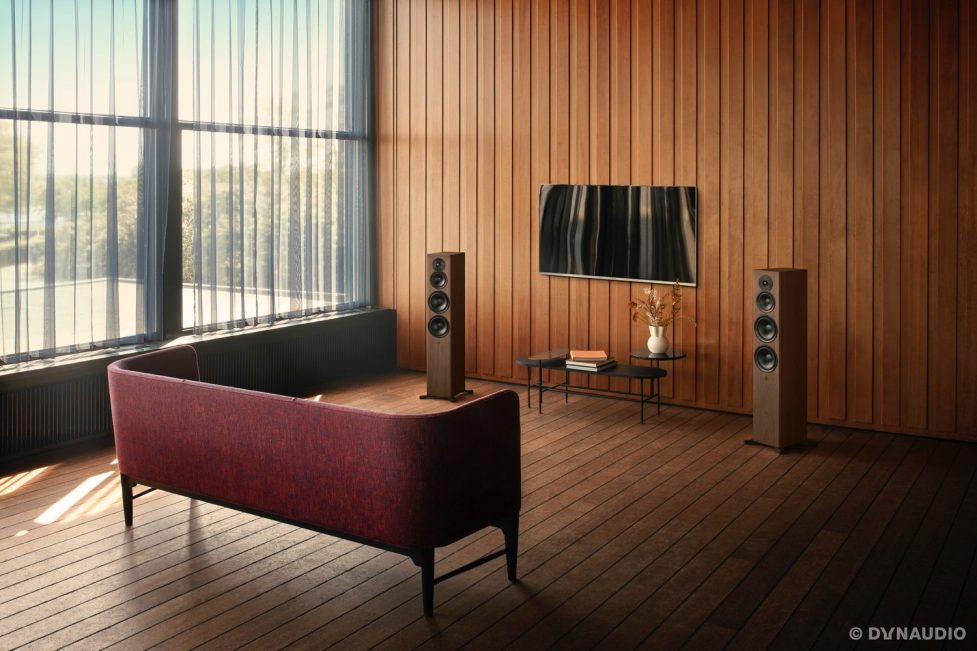 In terms of the performance, the Dynaudio Focus speakers use the same technology that can be found in the best music studios around the world. The series has been designed to effortlessly fit into any living space and for those looking for an efficient set-up that doesn’t require any technical alterations — even calibrating the sound from the speaker to the room… automatically.

For those, like me, that rely on streaming services to play music, the Dynaudio Focus range has got that covered too. You can stream everything from Spotify to Apple AirPlay and Tidal Connect, allowing you to control the flow of music from your sofa, kitchen table, or even bed — wherever your speaker is, you’re always in command of crystal-clear audio. 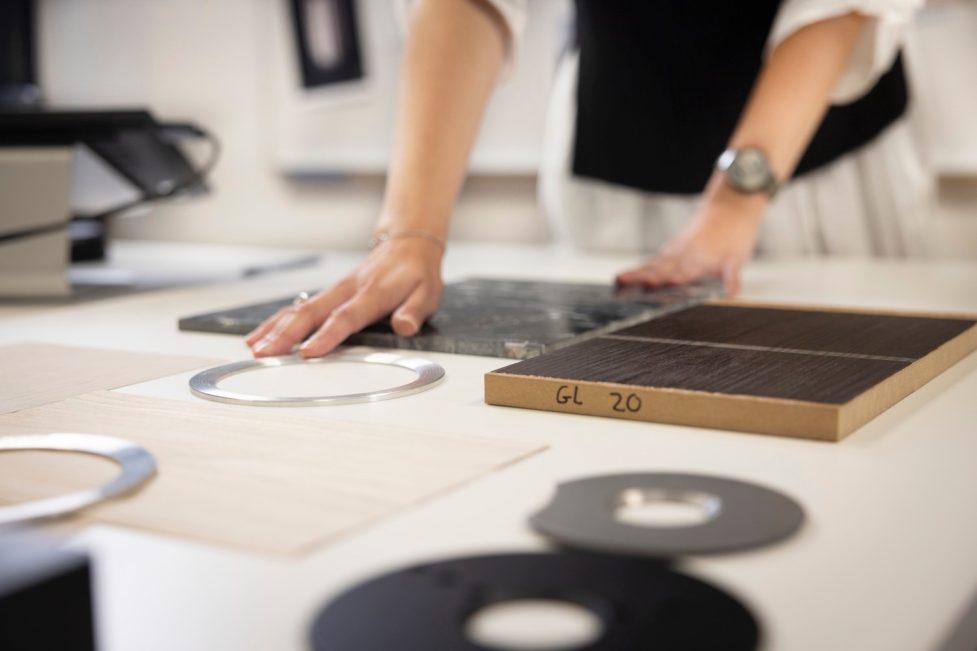 Falling in love with the design

At the heart of Dynaudio is the chic Scandinavian design that makes this speaker so much more tremendous than what other loudspeaker companies are producing. Naturally, a loudspeaker should deliver outstanding audio, and Dynaudio does that without hesitation, but of course the extra je ne sais quoi derives from the carefully considered manufacturing processes that exudes irrefutable distinction and is a class above other loudspeakers I’ve come across.

Ultimately, the trio of Dynaudio Focus speakers have been designed to seamlessly blend in with existing décor, without requiring the consumer to re-organise current room layouts that could distract from what matters most: the audio, the sound experience, and the emotion attached to the music.

Throughout discovering more about the Focus series, it became unavoidably evident that Dynaudio isn’t just about producing sound, it’s providing the chance for the consumer to be immersed in a sea of sounds that can transport the listener to another sound dimension where you can feel as if the music is being played live right in front of you. 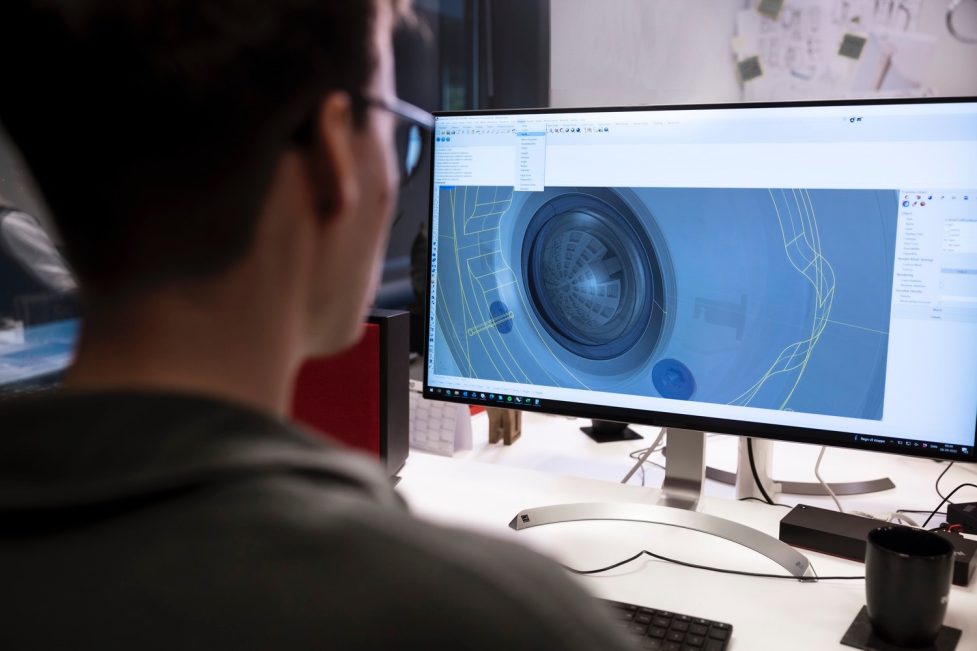 The combination between luxury and high-end technology creates a hi-fi system that places this speaker in a category above the rest, and that’s why I’ve fallen in love with it. 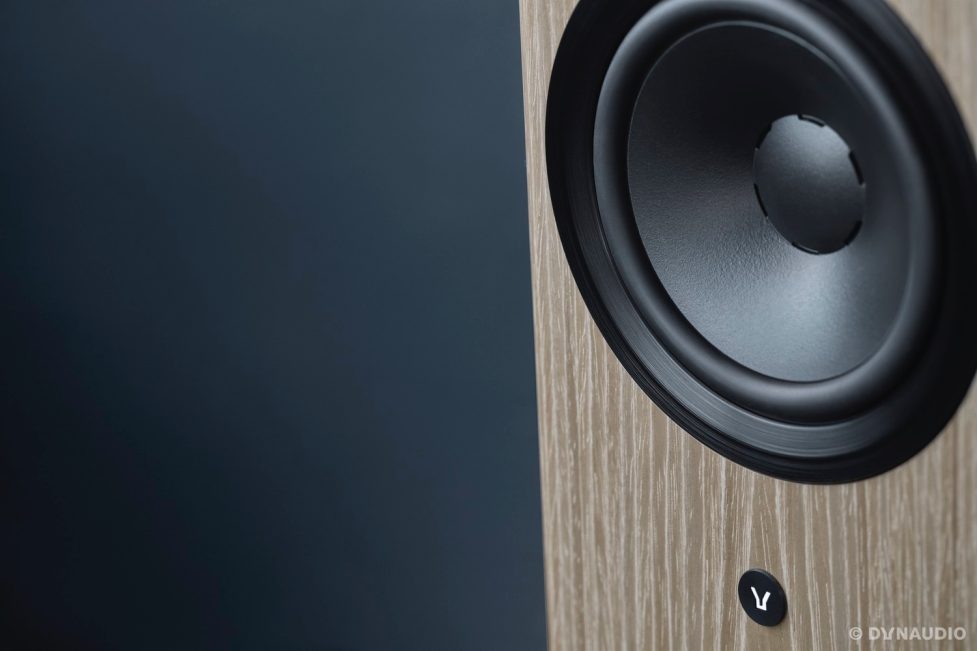 We’re used to listening to music via speakers on our phones or earphones and we’ve become accustomed to that level of less than perfect audio quality. I was very sceptical listening to Otto Jørgensen, who guided us through the listening experience as well as the disparity between our regular speakers versus the enormous audio power that Dynaudio’s loudspeakers have.

We listened to various genres of music and whilst I was taking in the surge of sound beaming through my ears, I could see the sheer strength of audio reverberating amongst everyone else in the room, as their eyes lit up in coordination with the progression of each musical track.

That’s when I realised the sound experience, whether it be from a phone or Dynaudio Focus loudspeaker, is crucial when it comes to any kind of listening experience, and I’d take the latter in a heartbeat. You venture further into a track, hearing moments of a piece of music you’ve never heard before. I was listening to music we’ve all caught innumerably on the radio, but somehow, through the genius engineering at Dynaudio, it was almost like I was listening to a completely different song.

That technological magic isn’t really magic at all. It’s knowing what produces the best sound. Dynaudio has nailed this mastery in every sense of the word. It comes as no surprise, either. Each speaker is measured in Jupiter, Dynaudio’s world-class measuring facility, to create audio that sounds like it could be a live performance.

You can be sat or standing, with your eyes open or shut, but you feel so engrossed in whatever is being played on a Dynaudio speaker; you’re instantaneously transported to a concert hall, a festival, or a venue with thousands of people – I guess that’s where the magic lies. 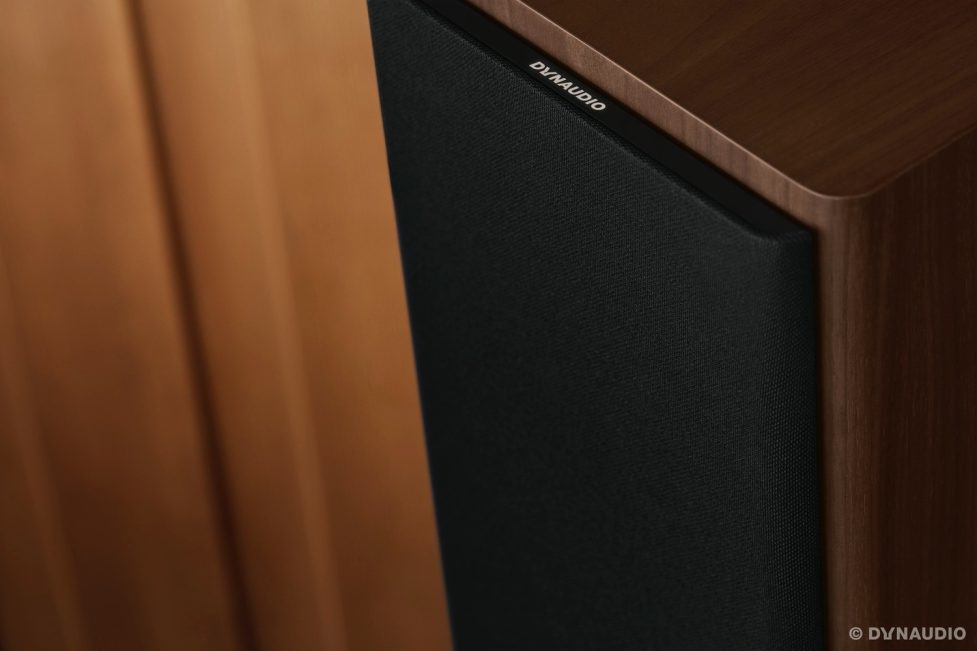 My visit to the Dynaudio HQ

After spending some time in Aarhus, we travelled to Skanderborg which is the home of Dynaudio.

There we met Sune Gammelgard, Director of Marketing. He directed us through parts of the building that almost acted as a museum of Dynaudio speakers. We saw the evolution of the product since it started in the late 1970s. 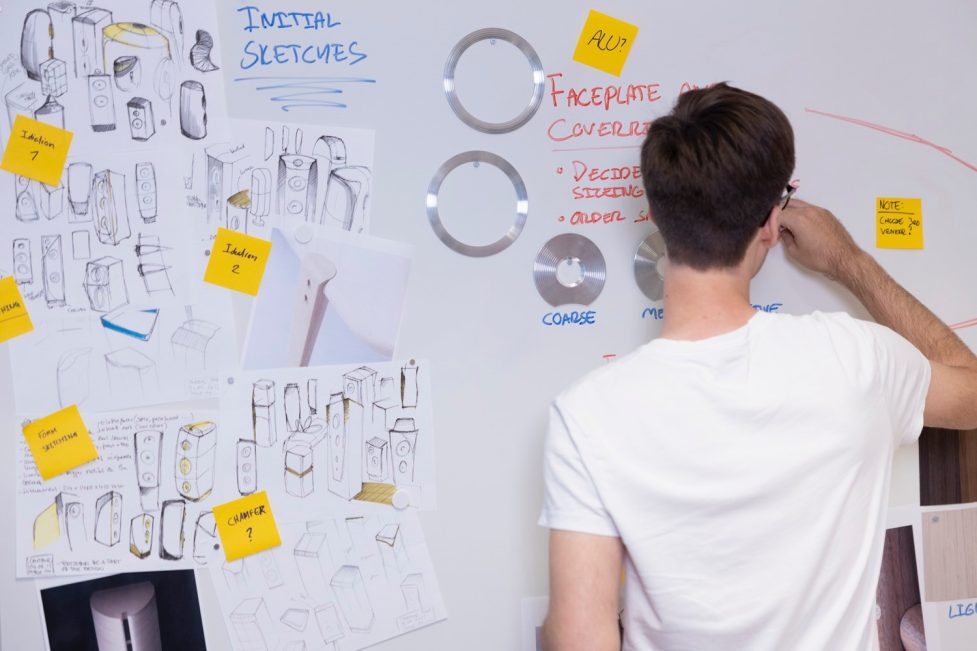 We gradually moved through the HQ and spoke to Stephen Entwistle, Chief Engineer and Industrial Designer Marcus Abrahamsen, who both explained the intricate design process, that always keeps the consumer in mind and making the design an integral part of the speaker’s DNA.

After getting a grasp of the thorough design stages, we visited the garage where both exemplified the relationship Dynaudio has had with major automotive brands throughout its history, such as with Volkswagen and Bugatti. We had the chance to experience the acoustics in one of the vehicles Dynaudio is working with and whether you’re in a car or room, the acoustic value of their hi-fi system isn’t lost or diluted regardless of the environment. It was a remarkable and valuable lesson in the way sound can change depending on the surroundings and how Dynaudio engineers have to adapt to the acoustic differentials that you can experience in a car over a bedroom, for example. An astonishingly fascinating insight: something, again, we didn’t consider previously. 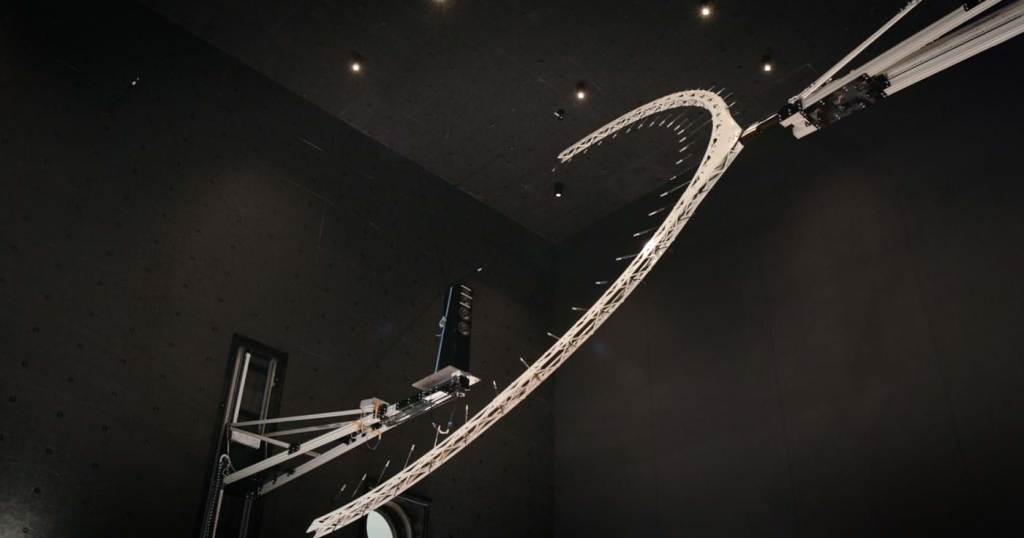 The moment we were all waiting for: Jupiter. It didn’t disappoint either. The size and gravitas of one of Europe’s largest sound measuring facilities was enough to make you re-evaluate everything you once thought about sound. This giant robot that only tells the truth. Jupiter is a giant, hollow cube, measuring 13 metres in every dimension, that forms the core of the dedicated Dynaudio Labs building. Jupiter is packed with technology that allows the room to provide detailed measurements of every Dynaudio product.

Here we observed the methods in which Dynaudio tests their products to ensure the sound is mellifluous, accurate, and worthy of the brand label. The methodology of testing sound is well considered and is the reason their speakers are always market leaders — they don’t miss a thing. The robot arm – with its 31 microphones at 6° intervals takes a 360° measurement to truly test the quality of sound.

Of course, there’s so much that goes into making a Dynaudio product, not just the proficient engineering, but also the manufacturing of the units that house the speakers. You can see exactly why Dynaudio magisterially command in the luxury sector for hi-fi. I witnessed tens of workers, that are clearly highly skilled, building these speakers and I even had the chance to put one together under strict supervision of someone who had been making these speakers for years. 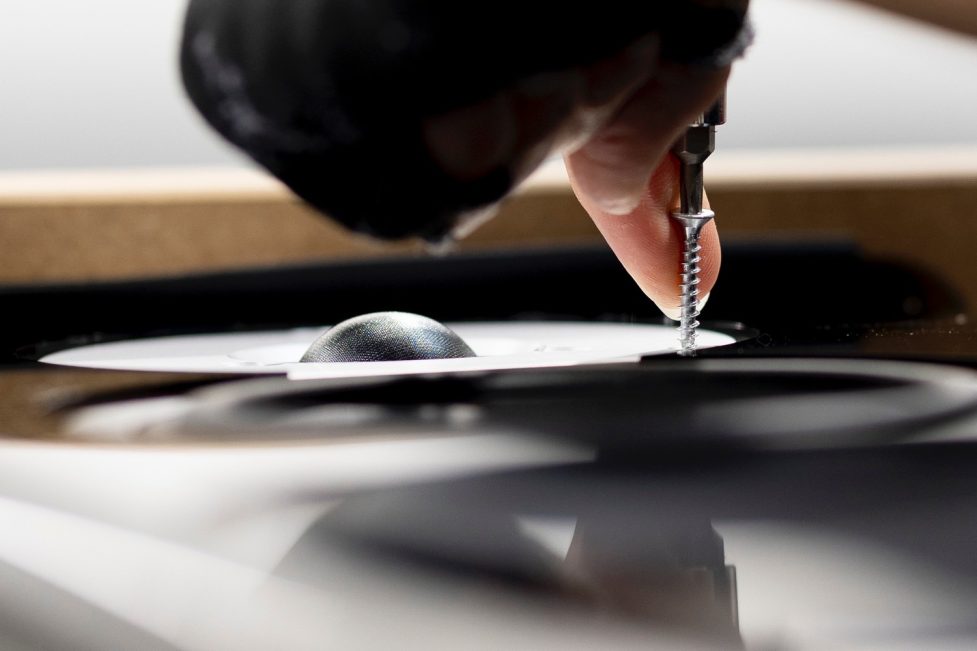 I left Denmark with a completely different perception on the world of sound. Dynaudio revealed a universe of audio that I’ve never experienced or even thought about before and proves the Danes are paving the way towards the future of sound.

All imagery courtesy of Dynaudio.