The Four Seasons Gresham Palace, Budapest: The Jewel of the Danube

Budapest is fast becoming one of Europe’s most inviting and intriguing destinations for culture vultures alike, and this weekend was spent at the luxurious Four Seasons Gresham Palace. Imagine a blend of chocolate-box hilltop vistas, burgeoning culture, and wry post-Communist humour that makes Budapest an equally charming destination. In fact, even the name itself derives from the merging of two cities. In the past, the two cities were divided by the Danube River – Buda and Pest – with Buda’s illuminated castle on one bank and Pest’s art nouveau facades on the other. 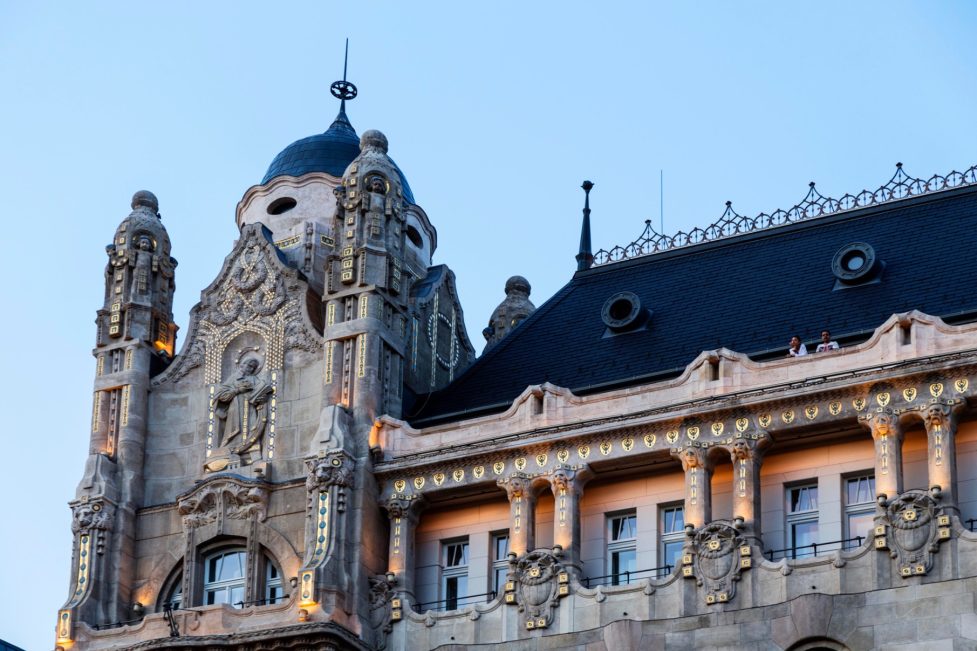 At the mouth of the mighty Chain Bridge, one of Pest’s most impressive façades can be found. A 1906 marvel of Secessionism, the Four Seasons Hotel Gresham Palace is one of Budapest’s grandest hotels. The Gresham Palace was built for the Gresham Life Assurance Company before culminating in its transformation into a luxury hotel. Designed by the leading Hungarian architect of the time Zsigmond Quittner and his associate, József Vágó (1877 – 1947), who took their influence from the Art Nouveau /Secessionist movement that originated among groups of avant-garde artists in Paris and Vienna. This movement transformed Budapest into one of the liveliest, most cultured, and prosperous cities in Europe; instilling a golden era that saw the construction of grand boulevards and numerous splendid façades alongside the banks of the Danube River. 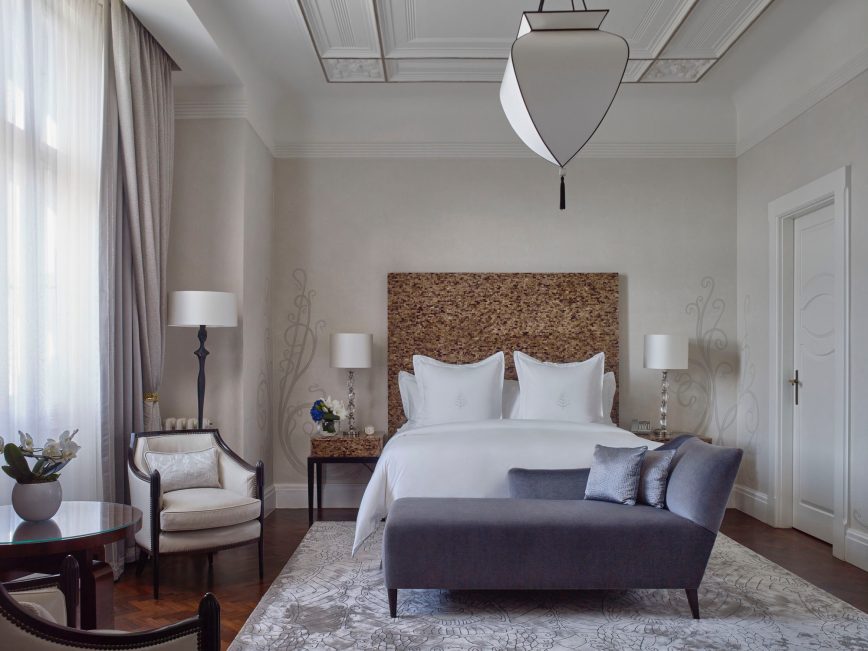 With soaring winter gardens, grand staircases, two-million-piece mosaic tile floors, and exquisite ironwork, the Four Seasons Hotel Gresham Palace is truly a breath-taking example of 19th-century fin-de-siè architecture. Very nearly destroyed during World War II, when the original building was seriously damaged, it took over a century for the palace to be exquisitely restored, by award-winning restoration artist, Miklós Szenkirál in 2004, which opened as a Four Seasons in 2006, setting the bar high for the numerous other restoration jobs currently underway in the city. The 179 generously proportioned guest rooms, including nineteen suites with vaulted ceilings and private step-out balconies, have been beautifully restored to the palaces’ former glory – combing historical elegance with ultra-modern comforts.

In the rooms, you’ll find parquet floors, pale greys, and, as always with the Four Seasons, an excellent bed that won’t fit into my hand luggage. Discover stunning views across the Danube to Buda Castle from the room’s draperies or take a 50-minute ride on a private Venetian-style speedboat from Dunarama to take in the illuminated cityscape. 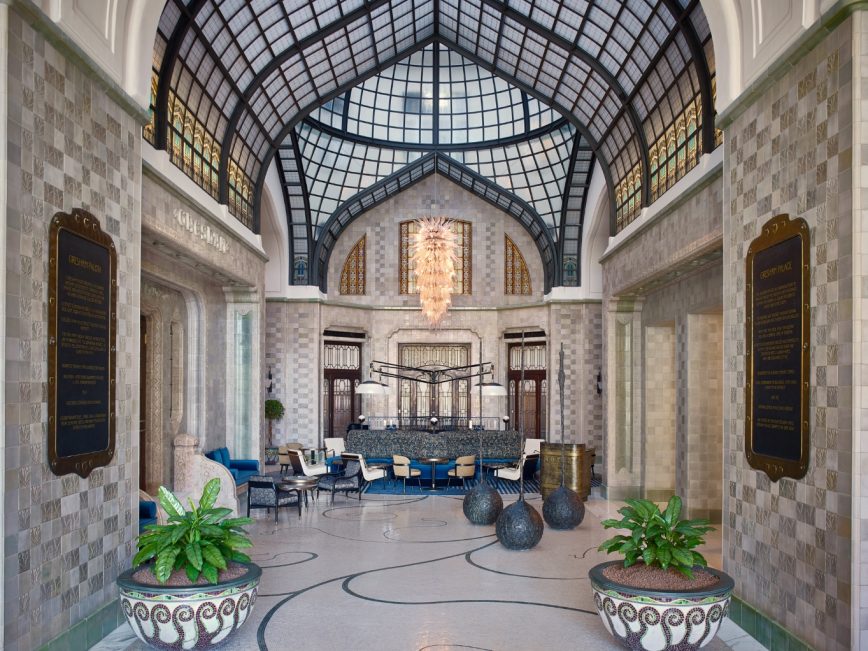 The Four Seasons Gresham Palace combines the luxurious comforts of the 21st century with the elegance of the past. Nowhere is this more evident than at the Four Seasons Health Club and Spa. It offers a comprehensive range of rejuvenating therapies, massages, and spa treatments based on Budapest’s rich spa heritage – from herbal to Hungarian Moor mud treatments. The spa occupies the hotel’s top floor and has a fitness centre, indoor pool, sauna and steam room. It’s the perfect place to relax after exploring nearby landmarks such as St. Stephen’s Basilica or Parliament House. 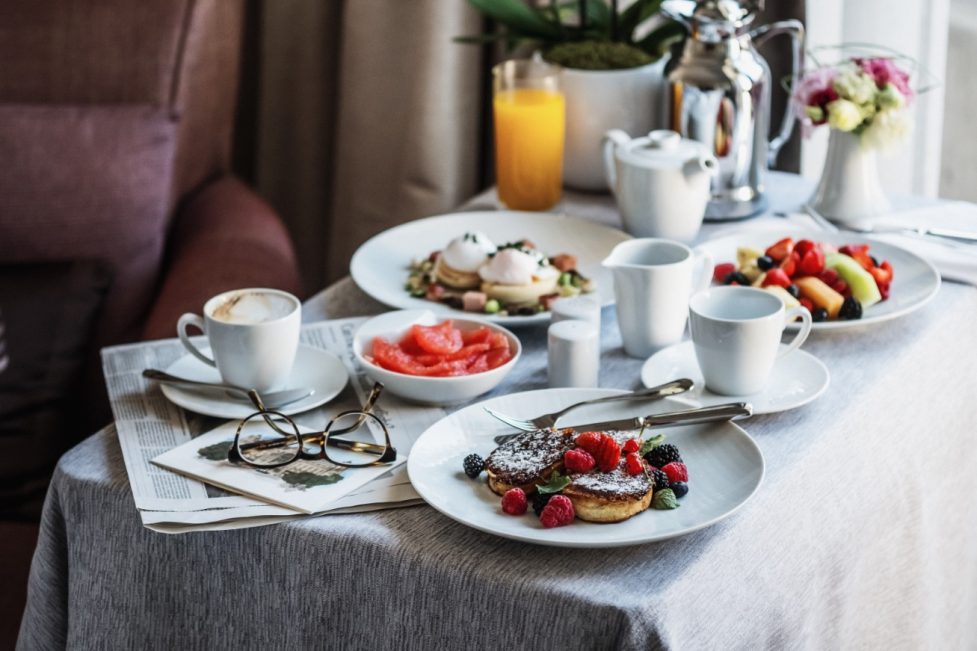 Gastronomy has always played an influential role in Hungarian culture, a cuisine which offers far more than Gulyás (goulash) and fish soup. It is characterised by both tradition and innovation, as well as creative ideas and solutions inspired by a heritage of many centuries. Considered from time to time as the pantry of Europe, with a favourable climate, it is a land that can produce a wide range of fruits and vegetables, and delicious cured meats, sweets and savouries. 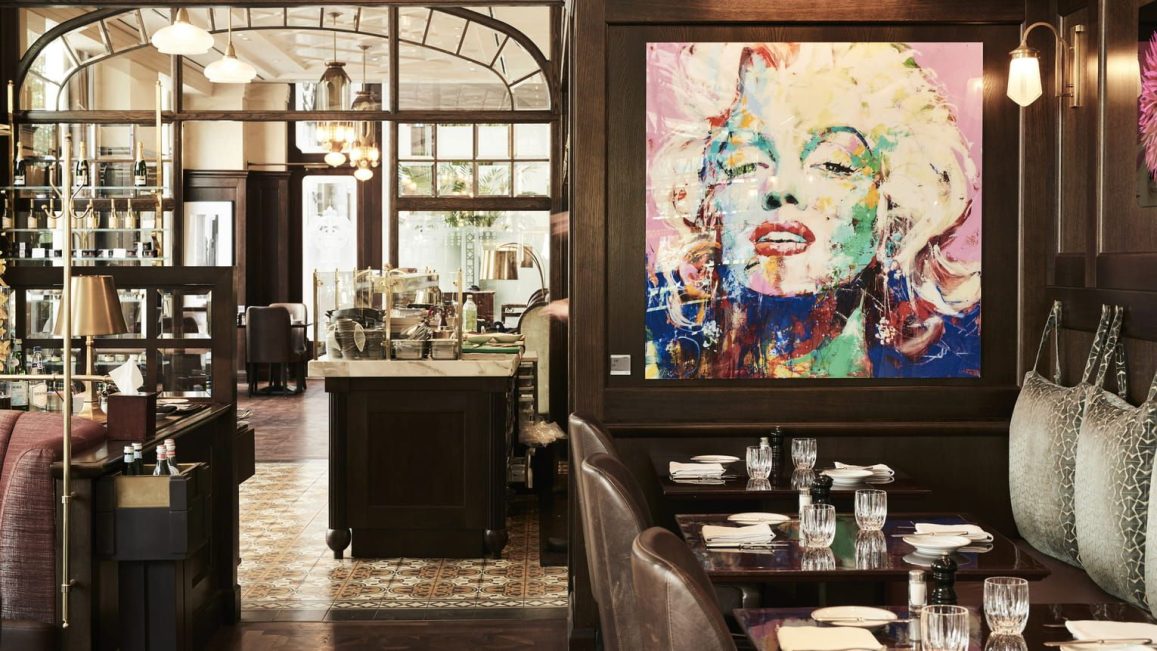 What is unique to the Four Seasons is that it pays to make reservations in the lobby, trust me. You will be taken on an oohs-and-ahhs-filled gastronomic journey when you opt for the Blind Date menu created by Executive Chef Árpád Gyórffy and Head Sommelier Gabor Becker. In either case, whether it is for breakfast, lunch, or dinner, the environment feels hip and comfortable. Seasonality and provenance are at the forefront of the a la carte menu, which combines European flavours and influences, particularly from France and Austria. Seared scallops and spicy octopus paired with potato paprika and Hungarian sausages are not to be missed.

In addition to a wide variety of international labels, the wine list offers a pleasing selection of Hungarian labels as well. If you’d like to try a Hungarian alternative to Chablis, ask for Furmint from Szepsy Estate. An elegant furmint with flavours of wildflowers, lemon and lime, hedgerow, and green bell peppers. If red is your fancy, ask Gabor about the succulent Pinot noir Etyek Kúria has to offer, and prepare to be pleasantly surprised. 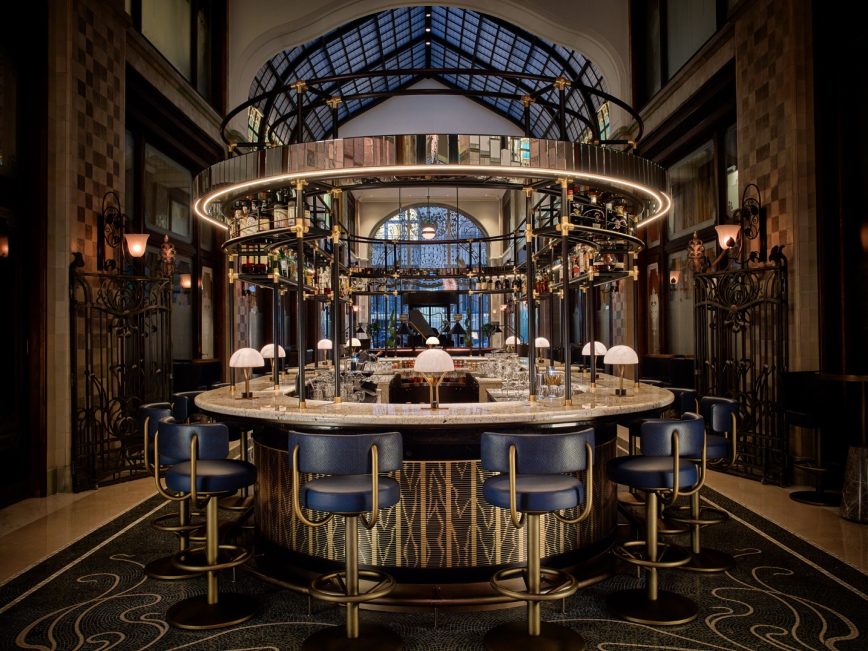 An exciting selection of sophisticated bar food is created by Executive Chef Pád Gyrffy’s artful blending of modern Japanese cuisine with locally sourced ingredients. There is an array of Asian-Hungarian dishes on the menu, such as Robata Grilled Yakitori, House Made Bao, Robata Grilled Wagyu, and Wasabi Sponge. The bar’s tasting room offers the largest publicly available vintage Tokaji Aszú collections in the world, hand-selected by Head Sommelier Gabor Becker. If that wasn’t enough, from 3-6pm, you can spend the afternoon sampling Hungarian cakes and savoury delights served in the famous Herend Porcelain as found at Buckingham Palace. The Herend Afternoon tea is available exclusively at the Four Seasons Gresham Palace most weekends. 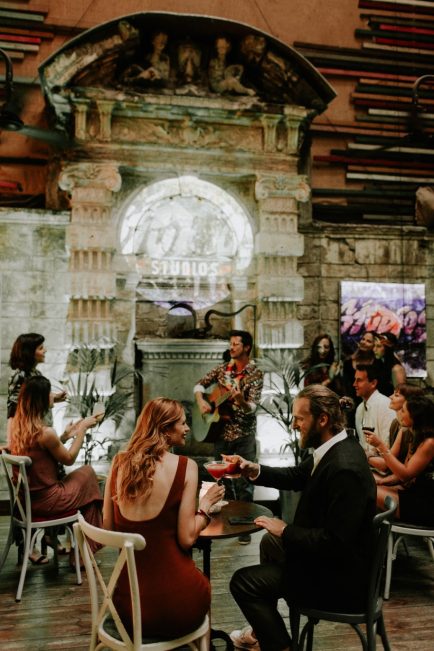 There are certain things that the Four Seasons never fail to deliver, besides a comfy bed, and that is their unfailing concierge service. As much as 48 hours is often a troublesome amount of time to spend in a brand-new city, there are certainly pressures, even if they are modern pressures, to fit 2880 minutes (48 hours) of content into what the Four Seasons describes as “sensory souvenirs”.

In Hungary, there are more than 1,500 thermal springs, 450 public baths, eight indigenous grape varieties and six different types of paprika to be found. There are eight experiences compiled in the Budapest Bucket List that are a potent source of insider knowledge. Through these experiences, guests can experience Budapest’s most authentic and immersive activities. It includes anything from a sunset cruise down the Danube River to exploring ruined bars in the Jewish quarter. 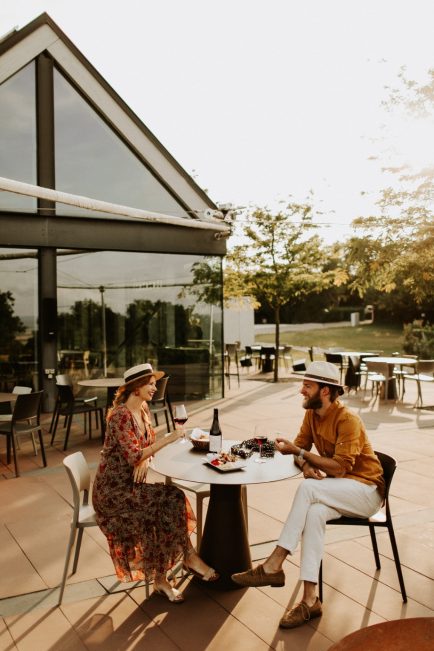 Budapest Wine Country is a must-see on the Budapest Bucket List. With over 1500 years of winemaking history and a wide variety of authentic grape varieties, Hungary is an exceptional wine destination for travellers. Besides Tokaji, Hungary offers six wine zones divided into 22 wine regions, five protected geographical indications (PGIs), and 33 OEMs (the Hungarian equivalent of PDOs). There is no doubt that Tokaj is a small wine region, and its greatest strength is innately terroir-driven. However, located just thirty minutes from the Four Seasons Gresham Palace, producing the finest Pinot Noir, Chardonnay and vibrant Sauvignon outside of France is Etyek Kúria Winery.

It is safe to say that Hungarian wine is still vastly undiscovered since very little of it is exported. A visit to Etyek, a Tolkienesqe village outside of Budapest, is a must. Explore the picturesque countryside as you tour the wineries and savour the exquisite local varietals. Savour the exquisite local varietals as you tour the picturesque countryside. Be sure not to leave without purchasing a bottle of Pinot Noir Selection 2017, another golden discovery by Gabor. 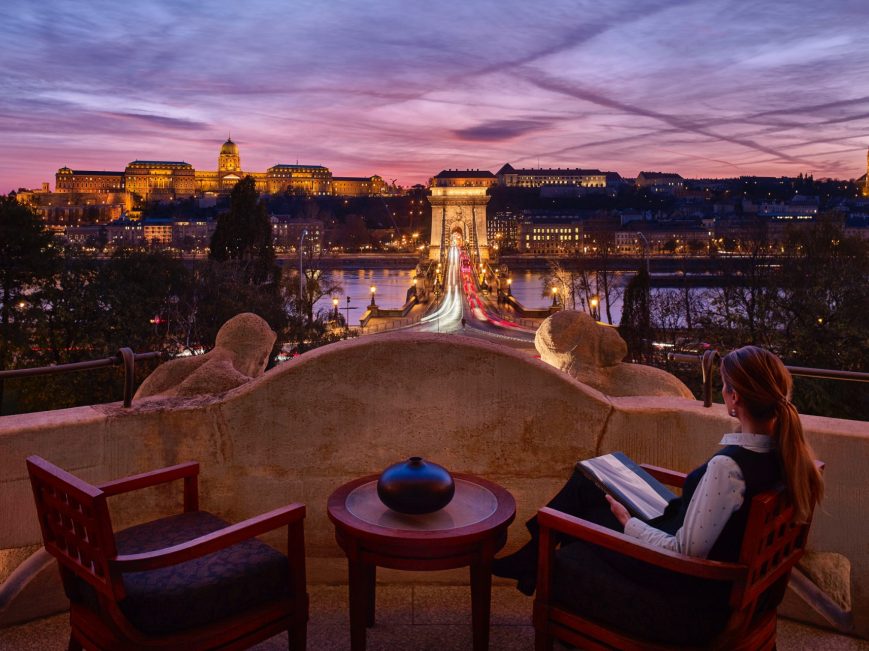 Budapest has a combination of Eastern mystique and Old-World grandeur that makes it one of the most popular European travel destinations. There is so much to see and do in this city, and The Four Seasons Hotel Gresham Palace connects unforgettable moments easily through their Budapest Bucket List, ensuring guests leave with plenty of “sensory souvenirs” that you won’t find on the shelves at duty-free.