Going Straight at Síbín: A whisky den at The Great Scotland Yard Hotel

Síbín – An illicit bar where alcoholic beverages are sold without a license.

It doesn’t take an ardent Sherlock Holmes fan to tell you that Scotland Yard has been synonymous with the Metropolitan Police since the nineteenth century, but it does take a touch more sleuthing to discover that long before then, the original street – just off Whitehall in the heart of Westminster – was christened thanks to its connection to Scottish royalty.  For Great Scotland Yard served, from the time of Kenneth III, as a form of ambassadorial residence for the use of visiting Scottish kings.  It is wholly fitting, therefore, that some 1,000 years later, part of this same site now serves as a very modern embassy for Scotland’s finest export. 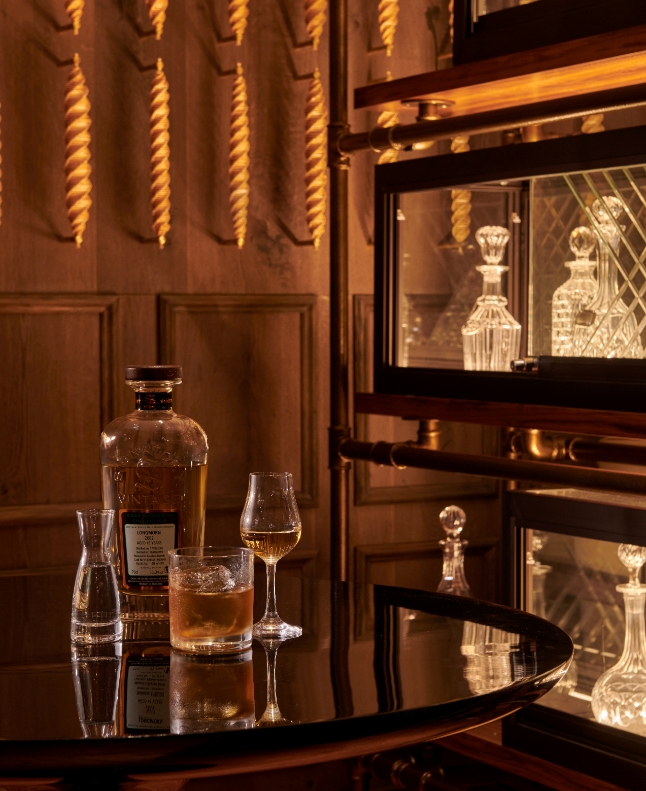 The luxury Great Scotland Yard Hotel that opened in December 2019 and naturally takes many of its design cues from the fascinating history of crime and punishment that imbues the site.

With that in mind, the ground floor is host to two bars inspired by illegalities of the past.  The first, 40 Elephants, is named for a marauding gang of female smash and grab artistes who ran riot across London in the late eighteenth and early nineteenth centuries; while the second, The Síbín (‘she-been’), takes its name from the Irish word for an illicit bar or club selling alcohol without a licence.  This now licit drinking den is entered through a bookcase to the right of a lobby lined with a rogue’s gallery of portraits representing the previous short-term occupants of the site. 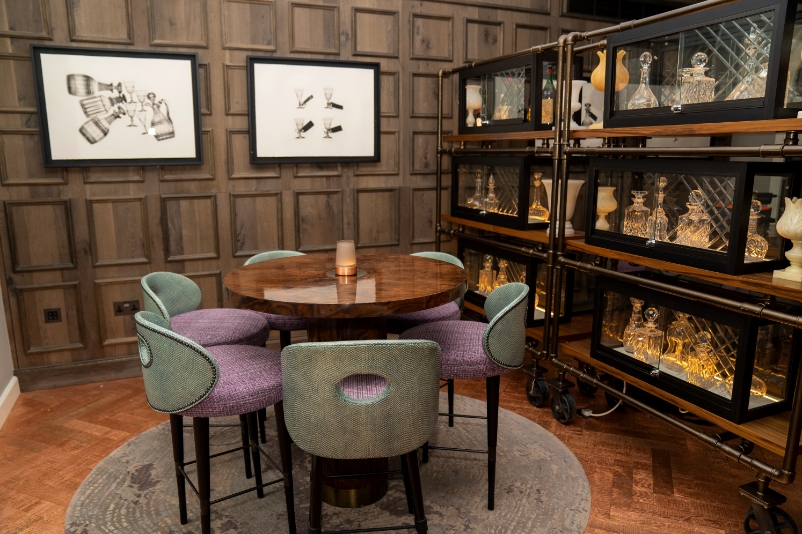 Once inside, it is clear Síbín is not the illegal watering hole of your Irish grandpappy, but a high-end shrine to the very legitimate business of whisky.  The low-lit space is divided into four distinctive seating areas: take your choice from a stool at a cask height table in front of Fox Talbot inspired decanter photogravures; a low velvet sofa under a looming Belinda Frikh portrait of a model I took to have been inspired by London’s greatest criminal, Cruella de Vil; armchairs in aqua velvet in front of a wall length arrangement of traditional corn dolls; or a seat at the low bar. 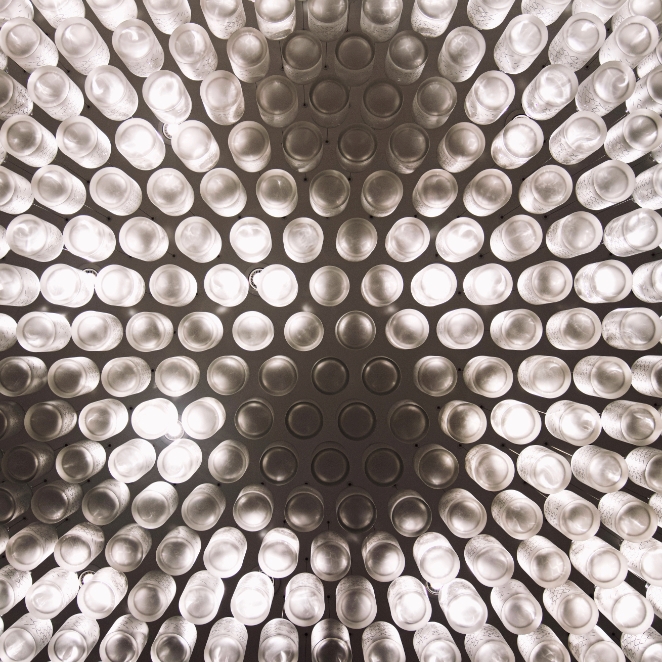 We’d recommend the latter, which is akin to pulling a stool up to a marble topped kitchen island, if your kitchen was primed for intimate whisky tastings and cocktail preparation (and frankly it should be).  Above your head, 1900 empty bottles form a neatly arranged chandelier of sorts, and in front of you, the back bar is lit in primary colours and divided into three cells of whiskies from around the world.

The current signature menu is supported by the Singleton – a trio of single malts promoted under one brand name – and the five drinks, named simply for their leading flavours, were created by Diageo’s malt whisky ambassador, Jo Last.  The intention is for this guest spot to rotate with the seasons and the team already have a number of exciting and innovative distilleries lined up to take the stand in the coming months.

From the signature list, you might opt for the pineapple and kaffir made with the Singleton of Dufftown 12-year-old and a homemade cordial that brings to mind tinned pineapple chunks in syrup, but is soft, light and refreshing.  Otherwise, the fig leaf and orange, made with the 18-year-old single malt from the same Dufftown distillery is a rich Mediterranean twist on a classic highball. 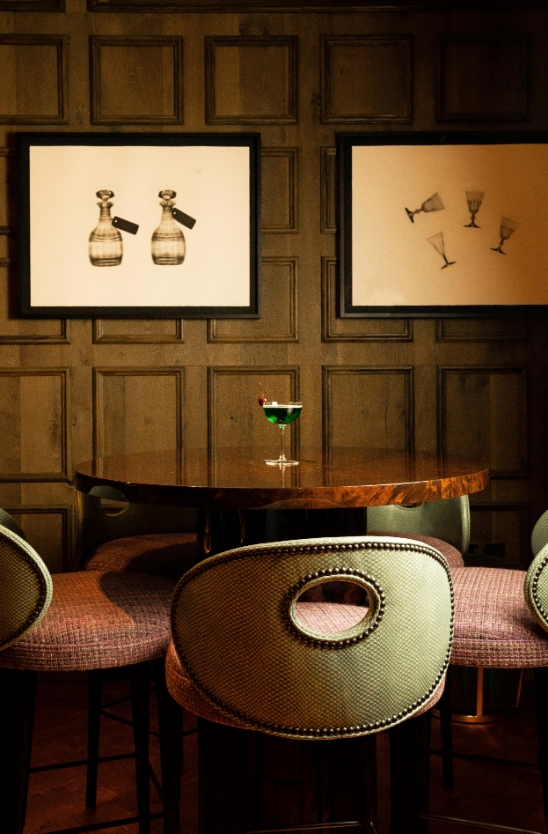 Over the page, ten ‘antagonists’ represent a selection of house cocktails, with the Swedish Hi-Ball (Mackmyra Mack and Svensk Rök Swedish whiskies with apple, lemon, rosemary and an eminently drinkable pine soda) like drinking a whisky highball in a Scandinavian Forest, and the Rosalita (Illegal mezcal with lychee, vermouth, rose and cherry) a stand-out for those that prefer other spirits to make their case.

The choices don’t end here, however, as a page of whisky classics (yes, an Old Fashioned, Manhattan and Boulevardier all appear) or the off-menu Blood and Sand (prompted by a lyrical conversation on the theme of Cherry Heering) will convert even the most ardent of whisky cocktail sceptics, and of course all your favourites are available on request from the enthusiastic and capable bar team.

Before we move from cocktails to hard liquor, it seems prudent to lay some groundwork from the snack menu, so summon three plates bearing bunched sheets of beef tartare lazing on dark sourdough bread; truffle arancini with a tantalising black garlic mayo; and cubes of beef shin soaked in British ale and covered in a panko crust which open with a crunch before melting in your mouth. 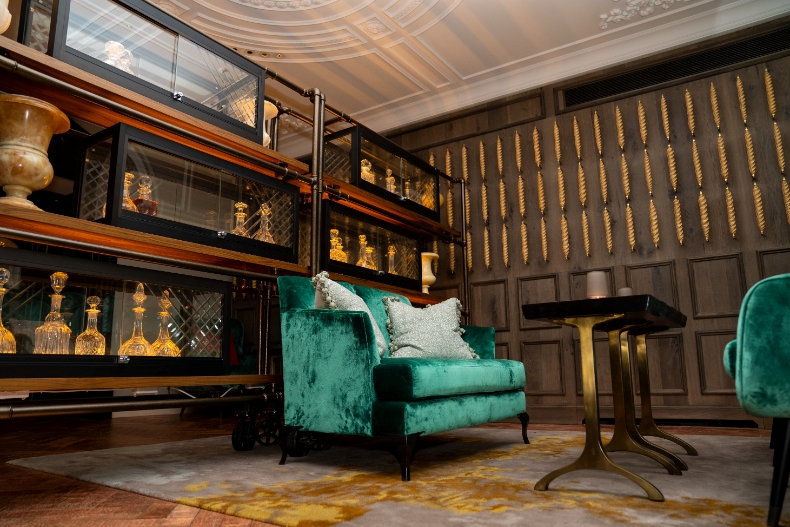 Closing statements could come in the form of either a whisky flight from a short list delineated by region, style or rarity – perhaps you can tempt the jailor to release an inmate from the glass cases displayed around the room – or the well-compèred selection of whiskies by the glass.  This latter list aims to break down the preconceptions or hesitations many have when approaching whisky, and categorises the drams by price (through four stages from daily dram to occasional evening wear), wood influence and smoke, eschewing the usual florid tasting notes and mythology for just the facts.  If your pockets are lined with someone else’s money, maybe the 1982 Port Ellen 25 year old will appeal.

With drams priced from £6 to over £200, the list offers something for everyone, no matter their swag, and while an evening this fun should probably be illegal, we’re glad this síbín has gone legit.

All imagery courtesy of Síbín at The Great Scotland Yard Hotel.