The Ferrari 488 Spider: My first Ferrari

When it comes to defining what the ‘best’ cars are, everyone has their own opinions and beliefs, very few of which are actually based on facts. For sure price and performance will be thrown into the melting pot of decision-making, but opinions are primarily based on that untranslatable Welsh word: hwyl. The nearest definition I can come up with is ‘soul’. Find out more on my experience with my First Ferrari.

I’ve driven and written about more powerful cars and, indeed, more expensive cars all of whose badges you would recognise. However, somehow, to this point in time, I have never driven a Ferrari. Not once. I’ve read about them, I’ve listened to others speak about them and I’ve seen them in the wild. But I’ve never so much as turned the key in one (not that you turn a key any more – you push a button). So here goes: my opinion, which is a veritable blend of both facts and feelings. 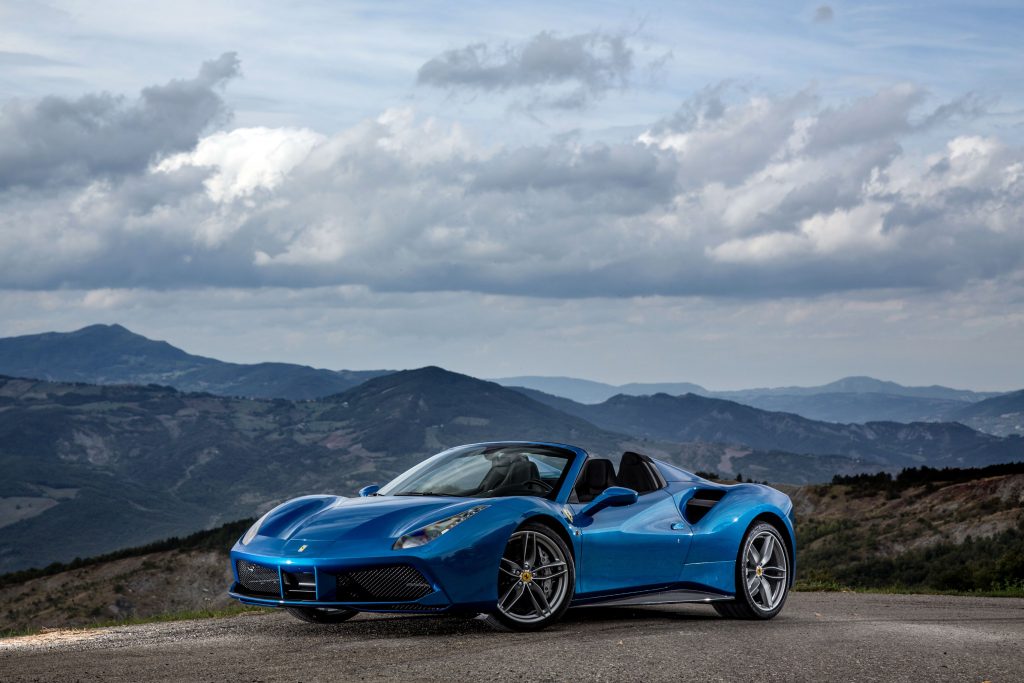 Ferrari, the brand, comes with an aura. My first sight of the 488 Spider that was presented to me for a few days only affirmed my pre-conceived notion; that despite my cynicism at the prevailing image I would be wowed by the beauty. And thus, gleaming through the greyness of a British summer afternoon, the Race Blue paintwork (Blu Corsa in Ferrari-speak) immediately saved me from feeling like a cliché.

There are those who bemoan the loss of the naturally aspirated V8 4.5l power plant of the 458 but for me, with no prior experience of any Ferrari engine, the 3.9l twin-turbo flat crank V8 in the 488 Spider is a wonder. A turbo engine comes with negative imagery of power lag and burps and whistles through the range, but Ferrari have worked wonders with this lump. They have provided a graduated torque curve through the gearbox that makes you feel like you’re always sitting on the destructive potential of an atom bomb married to the reactionary responsiveness of a housefly poised beneath your right foot.

This potential provides you with trackside aural performance at British B-road speeds. For while the Sturm und Drang of a naturally aspirated engine may be a little lost at the highest revs the pay-off is in the mid-range. Never have I felt simultaneously so near the edge of a precipice and yet in such control. 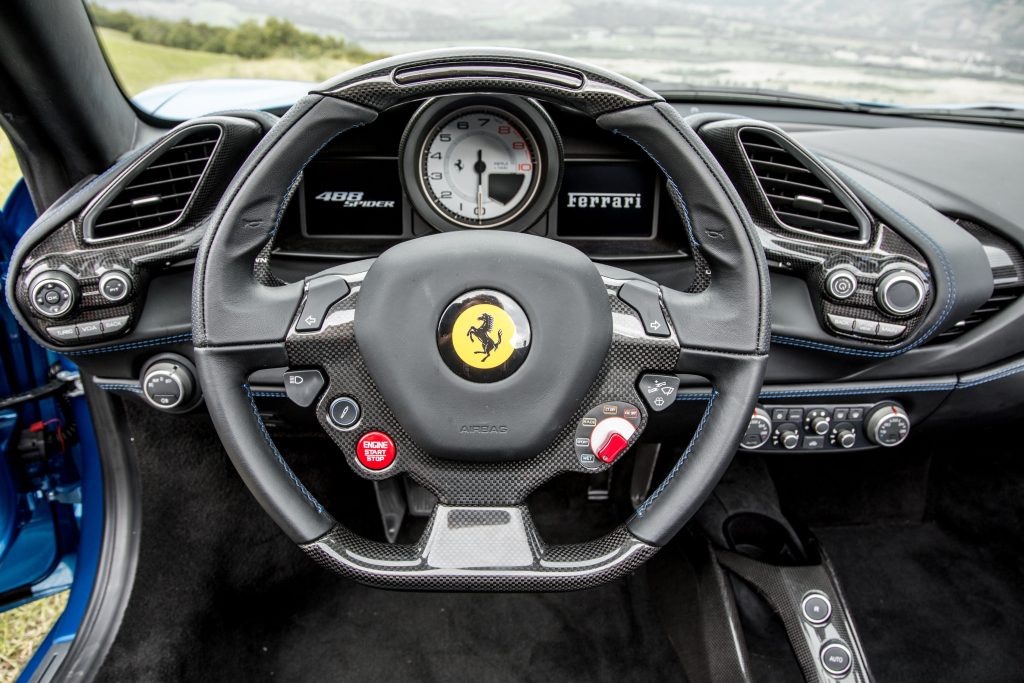 Taking the roof off a car requires industrial levels of extra strengthening in the bodywork but the extra weight that the 488 Spider does carry doesn’t hinder her performance. She will still scream from 0-62mph in a flat three seconds and top out at 202mph. Creeping round country lanes is no easy feat given the 2-metre width but that’s not the Spider’s natural habitat.

Get her out onto the open road and the ferocious acceleration paired with Ferrari’s Side Slip Control (SSC2) system helping you to navigate the bends results in a car that flatters the driver far beyond his or her talents. Put the Spider into ‘Bumpy Road’ mode – a setting that should be the default for British roads – and, if you close your eyes (obviously not recommended!), you would be forgiven for thinking you were in an executive saloon car. 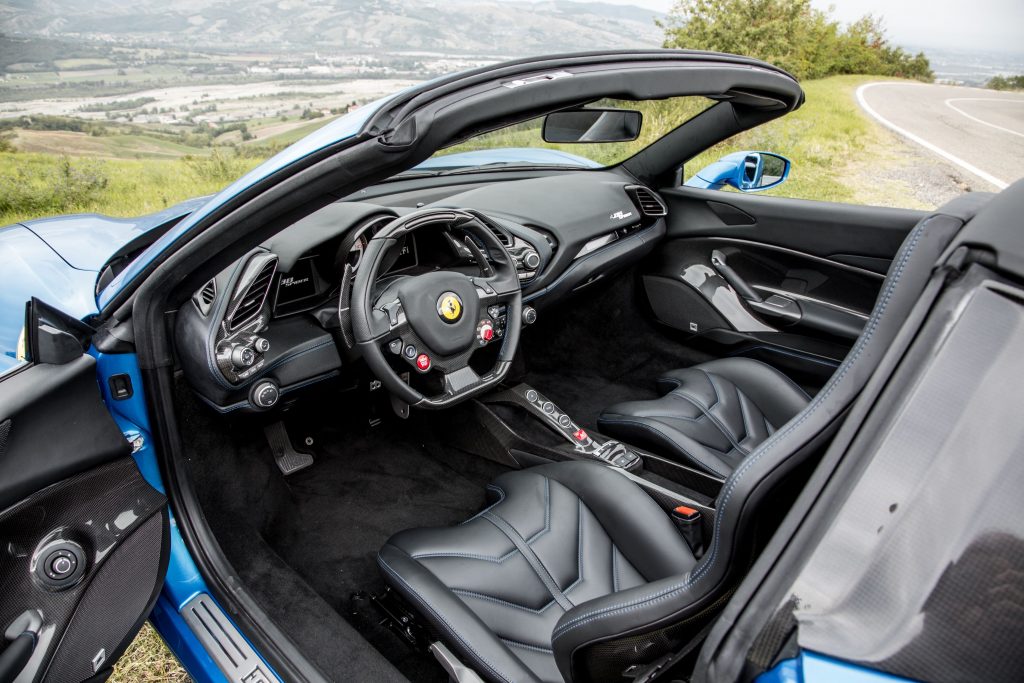 To sit inside this masterpiece of modern art is to be reminded that everything is about the driver. For sure any passenger will have a wonderful time as well but all the internal architecture revolves around the pilot. It’s not as instinctively easy to navigate the controls as you might imagine but by no means is it difficult. A full-lock turn may have you searching for the indicator switch as it’s mounted on the wheel itself and reversing out of a parking bay does provide you with an unexpected visual challenge over your shoulder but these are minor hindrances.

It is also impressively spacious for the normal-sized human being. Two six-footers can make themselves comfortable for extended periods of time within the cabin and there is plenty of internal storage space for all the paraphernalia of motoring. In fact, between the storage well in the nose and the shelf behind the seats you can carry more than merely an overnight bag as might have been expected. 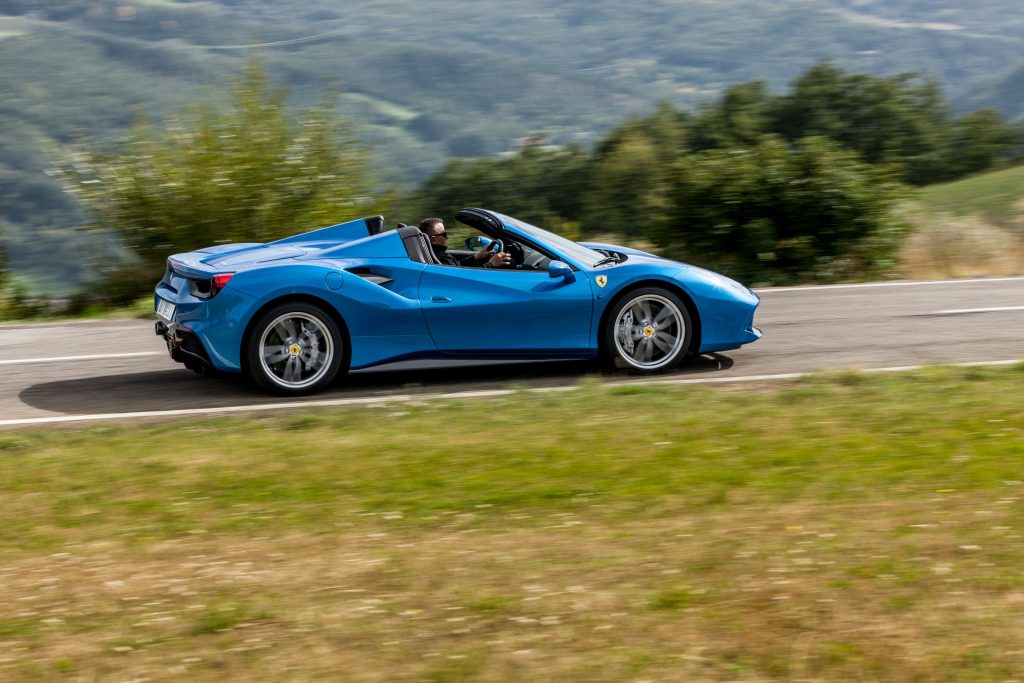 With the roof up or down the 488 Spider tingles the senses. The roof itself comes off in only 14 seconds and will operate at speeds of up to 30mph, which is very handy if you happen to run into one of Blighty’s unexpected rain squalls. In fact there is something of an overlapping position with a three-stage rear window between the B pillars that allows you to shut out the elements while still getting the visceral roof-down experience of the engine immediately behind your left ear.

As it rained a lot while I pretended that this car was mine, this turned out to be my favourite option. So much so that, on one occasion, I passed through a tunnel, took the subsequent exit from the A10, circumnavigated the roundabout and returned solely to feel the shiver up my backbone again as the engine note reverberated beneath Hatfield.

It just so happened that during the period when I had the Spider, I was scheduled to meet with my accountants in Cheltenham. This was surely the first time I’ve looked forward to crossing the country for a meeting with the dry old (but important) suits who look after my taxes. However, once I had persuaded them that I hadn’t had a financial moment of madness and laid out £282,728 (for this iteration; models start at £204,411), the suits metaphorically came off to reveal previously unsuspected petrol-head t-shirts. This Ferrari really is a car to paint colour onto the greyest of canvasses. 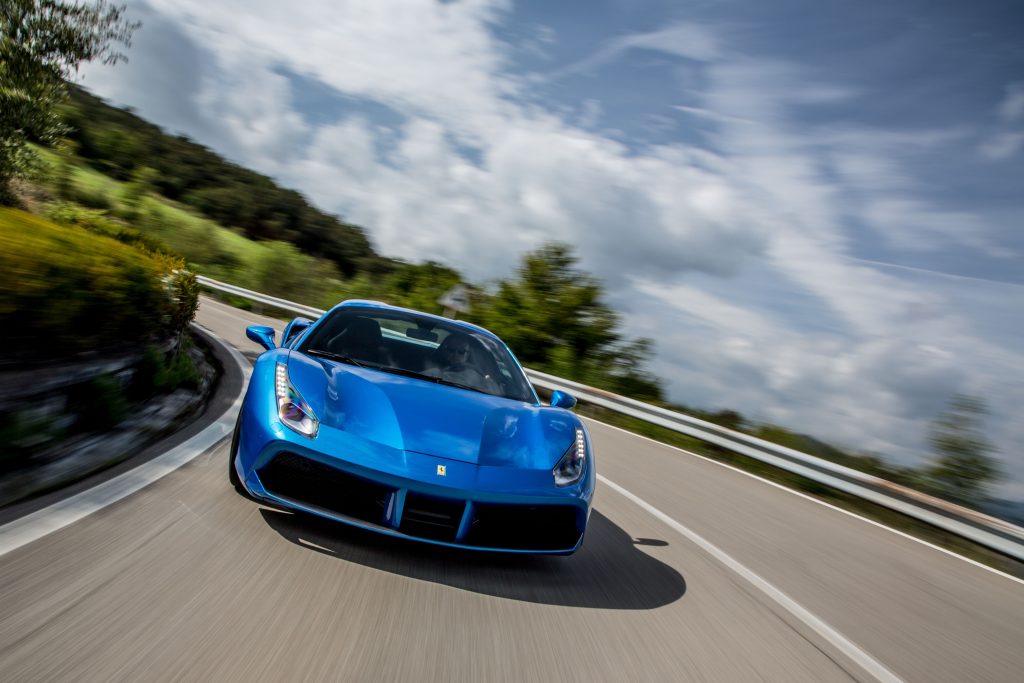 I do have a somewhat prevailing belief that unless you have teenager-taut skin and a lustrous Lion King mane you really shouldn’t be seen in a car with the roof off. However, as is my wont, I continually ignore my own advice. Ferrari’s 488 Spider is a car in which you won’t mind folks pointing and staring even if you have a low embarrassment threshold. There are so many beautiful sights to be seen in our green and pleasant land and, weather permitting, what better way to see them.

A passage from Lawrence Sterne’s A Sentimental Journey comes to mind: ‘There are all kinds of travelers – inquisitive travelers, idle travelers, vain travelers – but the true value of travel is not in strenuous sightseeing. It is in opening ones heart to feeling.’

Could there be anything more a propos for this means of getting from A to B? More than anything, the Ferrari 488 Spider really does engender feeling.

All imagery courtesy of Ferrari.