A Night in the West End: A Visit to Les Misérables

In the heart of London is a series of boroughs and neighbourhoods creating the city’s West End. Many tourists and Londoners are drawn to the impressive theatre industry  that is home to the West End, but there is much more to this area than its theatre district. With a series of restaurants, bars, shops and clubs, your night does not have to end once the theatre’s curtains come down. 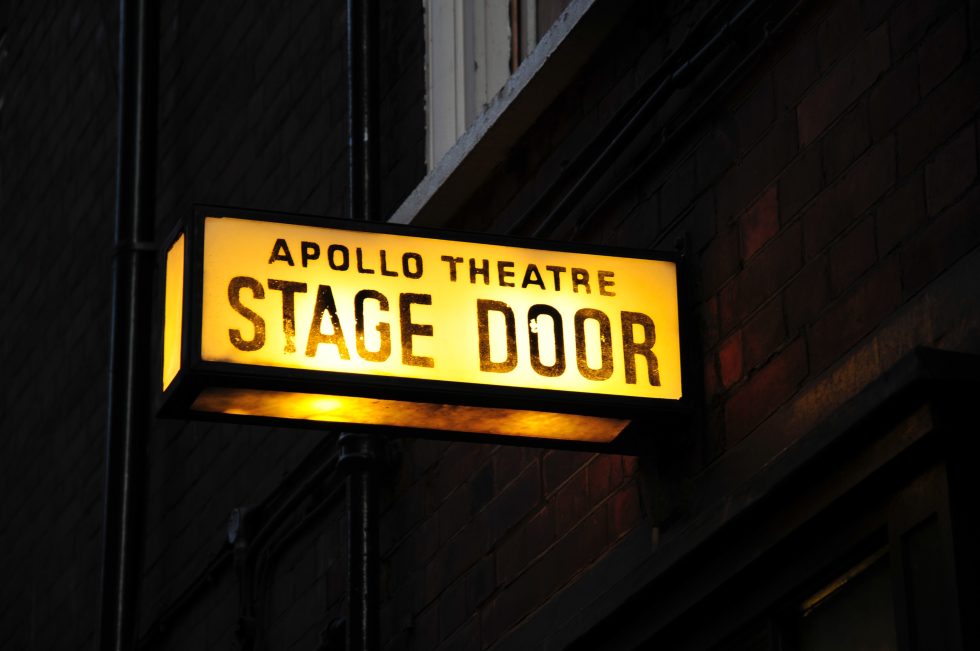 London’s Theatreland has provided quality theatre productions for years. Home to some of London’s, as well as the world’s, best plays, and musicals, this is a hotspot for anyone visiting England’s capital.

While Les Misérables is at the top of many lists of musicals to see in London, there are a variety of productions to see:

The Upstart Crow, playing in the Apollo theatre, is based off of Ben Elton’s sitcom ‘Upstart Crow,’ and follows the career of William Shakespeare. In a satirical adaptation of the poet’s career, we are shown the ways in which Shakespeare’s famous plays were conceived and written.

Home to the Novello Theatre is Mamma Mia, the world-renowned production featuring the music of Swedish band ABBA. We are taken on a journey exploring love and heartbreak as we follow a newly engaged 20-year-old Sophie Sheridan, played by Meg Hateley, in her effort to find out the identity of her father. Despite the various subplots and amazing score, at the heart of this story is the bond between Sophie and her mother Donna, played by Mazz Murray.

If you’re looking for a witty, feminist retelling of history filled with colourful costumes and powerhouse performances, you need to see Six the Musical at the Vaudevill Theatre. Joined together by their mostly tumultuous relationships to Henry VIII, the six wives of the English King come together to outline their respective relationships as well as how they famously ended–either by divorce, decapitation, death, or survival.

In addition to these amazing productions, the West End offers My Neighbour Totoro at the Barbican Theatre, The Snowman at the Peacock Theatre, Tina – The Tina Turner Musical playing at the Aldwych Theatre, Back to the Future located at the Adelphi Theatre, Disney’s Frozen at the Theatre Royal Drury Lane, and the world-renowned Wicked playing at the Apollo Victoria Theatre. 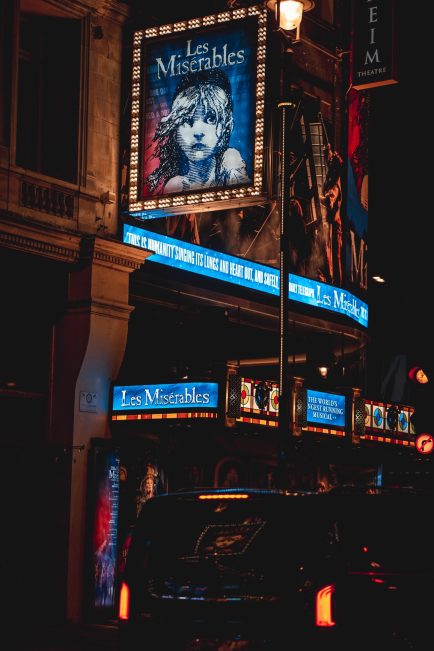 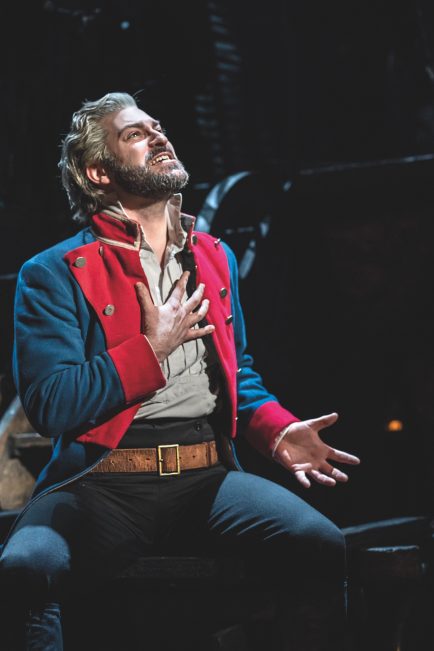 Set in 1815, the musical stems from an incident in which Jean Valjean, an ex-convict played by Jon Robyns who has endured 19 years of prison, steals silver from the Bishop of Digne–the only person who has offered him food and shelter. When caught by the police, much to Valjean and the audience’s surprise, the Bishop explains to the police that the silver was a gift. Upon being released from the police’s custody, the Bishop tells Valjean that he is to use the silver to redeem himself, commencing the play. Acts I and II follow the main conflict between Valjean and Javert, a police man dedicated to recapturing Valjean played by David Thaxton, as well as the subplots of various characters–all of which happens alongside the June Rebellion. 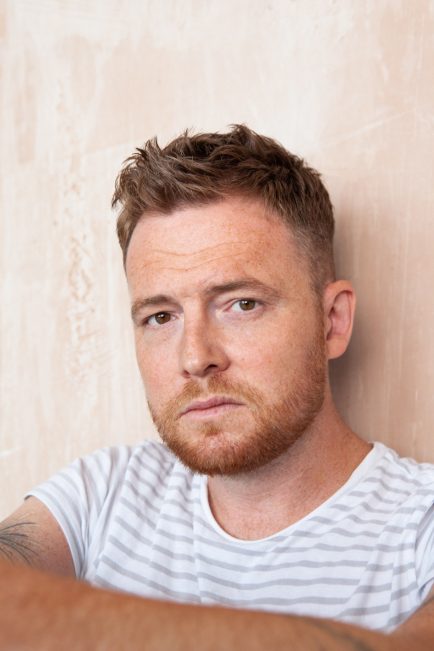 Robyns and Thaxton, playing the main roles of this critically acclaimed production, are no strangers to the stage. Robyns, though currently performing as Valjean, has appeared in the production twice before. The actor originally played the role of Marius until his departure in 2009, and later joined the musical’s 25th Anniversary International Tour as Enjolras. Thaxton is a Welsh singer, actor and performer who has appeared in various West End productions before his current role of Javert. Thaxton appeared in London’s The Phantom of the Opera as well as Come From Away, and even won the 2011 Laurence Olivier Award for Best Actor in a Leading Role in a Musical. 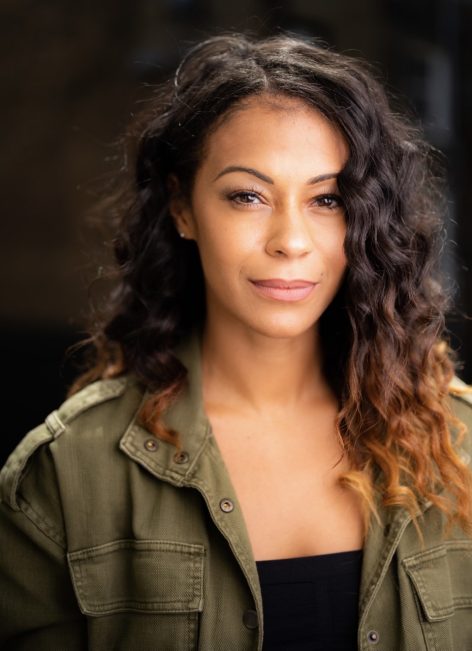 The production features iconic songs including I Dreamed a Dream, performed by Eva Brennan as Fantine; On My Own, performed by Nathania Ong as Eponine; At the End of the Day; and One Day More, performed by Robert Tripolino as Marius.

The lighting, sound, and costumes are a significant aspect of this production, as they only add to the overall experience that is Les Misérables. The show has really developed over the years. The attention to detail in the characters and story telling gets better and better. The show is so very moving and the songs capture hearts and imaginations.

Things to do before and after the show

The West End is always buzzing with activity and with so much to see and do, you’ll never be left feeling bored. Whether you want to have a meal, shop around or enjoy the bustling city of London, there are a variety of options to pick from, there’s something for everyone.

For those looking for a pre or post show meal, The West End is home to many London hotspots that range from Michelin star cuisine to more relaxed and laid-back restaurants and bars. Many also offer pre-theatre menus at a set price with two or three courses.

If you have a little more time to spare, with such a central location, the West End is close to many high end and high street stores for you to indulge yourself with some shopping before you head to the theatres to enjoy your show. However, if you’re looking for some night-time entertainment after your show, there are several bars, pubs, and clubs for you to enjoy a few drinks to enjoy the London nightlife to the fullest.

The West End is a bustling hub of activity and with theatre productions more innovative and prominent than ever, there are so many theatres (many of which have so much history to them) to visit and enjoy an array of shows. Les Misérables being a significant example of the creativity, popularity and charm of theatre shows in London with its immensely long run-on stage.

All imagery courtesy of Les Misérables.