From Ibiza to Mayfair: Balearic bliss at IT London

Who needs Ibiza when you have IT London? When you think of Ibiza, what immediately comes to mind? Dancing until the early hours in fancy clubs and meeting party people are just a few highlights on the Balearic island. But in a former art gallery space is IT London, your Balearic bliss in Mayfair.

IT London is not just a restaurant, it’s a place meant for long dinners, sprinkled with some Italian magic. The sought-after location, on London’s prestigious Dover Street, is an area renowned for being the place for art, fashion and hotels. IT London is designed for eating, drinking and socialising, much like its original sister restaurant IT Ibiza, and the other restaurants in the IT family. 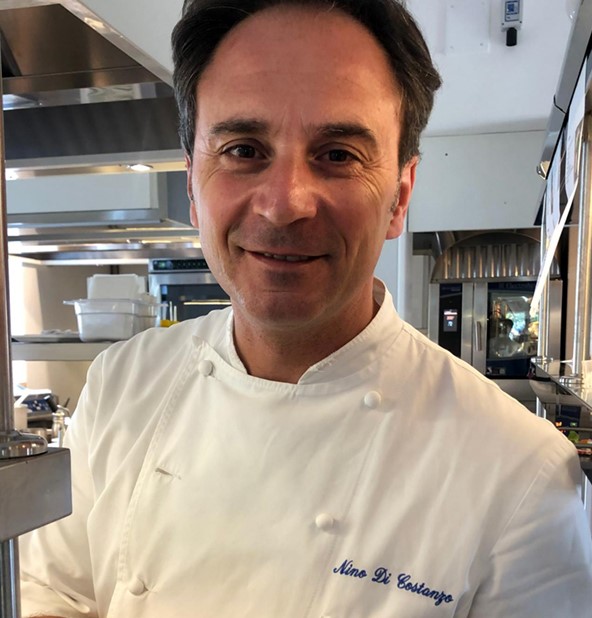 Nino di Costanzo is the kitchen’s new chef consultant, whose two Michelin star restaurant Daní Maison in Ischia, Italy, was recently named among the “10 coolest restaurants in the world.” His mentors include the legendary Juan Mari Arzak, of Arzak fame, and this new menu Nino has finessed has smatterings of that innovative Basque influence throughout. 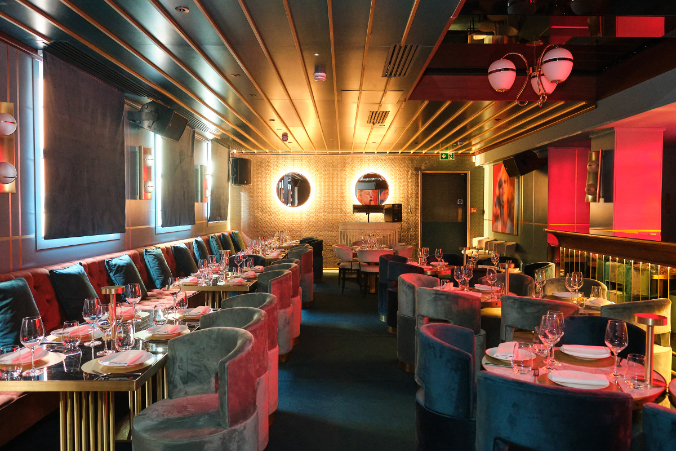 Back to the restaurant itself – a lot of the staff at IT London are Italian, and utterly charming. Our new friend is Angelo, and he proudly tells us that the gourmet pizzas at IT in Milan are the first pizzas to have been awarded a Michelin star. We listen to Angelo’s sound advice and start our meal with a delicate margherita pizza, topped with whisper-soft shavings of aged prosciutto. The pizza is exceedingly thin, but big on taste and topped with the highest quality Italian ingredients. 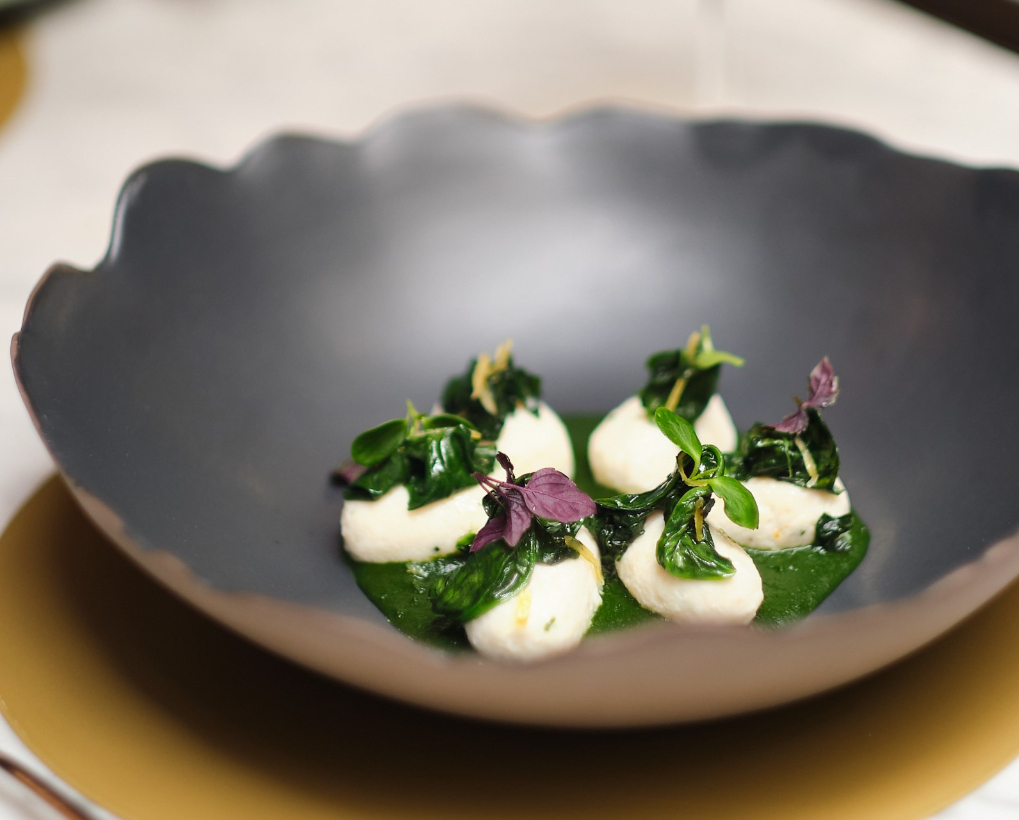 For our next course we try the gnudi, or what appear to be dumplings but are actually pieces of the freshest ricotta, bathed in a simple sauce with spinach. The restaurant also prides itself on sourcing only the freshest of fish, so we couldn’t refuse Angelo’s suggestion of a seabass tartare alongside the gnudi. The seabass comes with pomegranate, asparagus, and passionfruit, but it’s the natural sweetness of the raw fish that shines and is complemented by the tart fruits and the balanced asparagus. 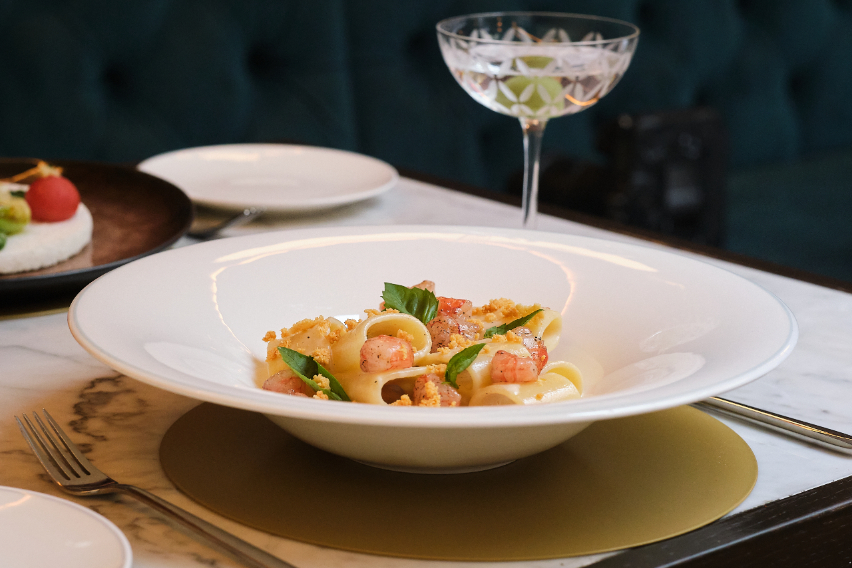 Despite our Managing Editor being on keto for the last few months, the cacio e pepe takes my eye with the unique addition of gamberi. The pasta is a perfect sized portion of thick, al dente paccheri in an unctuous, almost buttery, thick yellow sauce. It’s a fantastically executed pasta that redefines cacio e pepe, with or without the gamberi.

Next, a veal cheek with beansprouts and mash, and a seabass served “nerano” style, or with courgette. The seabass is pan-fried, with the skin remaining crisp and the flesh just on the right side of translucent. Ready for dessert, we are surprised by the house tiramisu, which looks like a mirror glazed cake straight from your local patisserie, served alongside ice cream and a unique shot glass of coffee foam (think a mini macchiato). 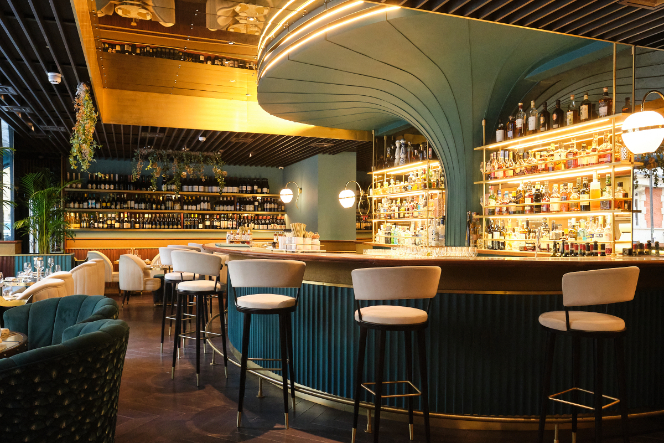 I always think that a lot of restaurants consider the bar last when it comes to restaurant design, and the overall ambience tends to suffer for it. At IT London, the bar takes up at least a good third of the overall area, giving people the option to sit at the bar or in well-decorated tables by the windows before their meal. I like this a lot. 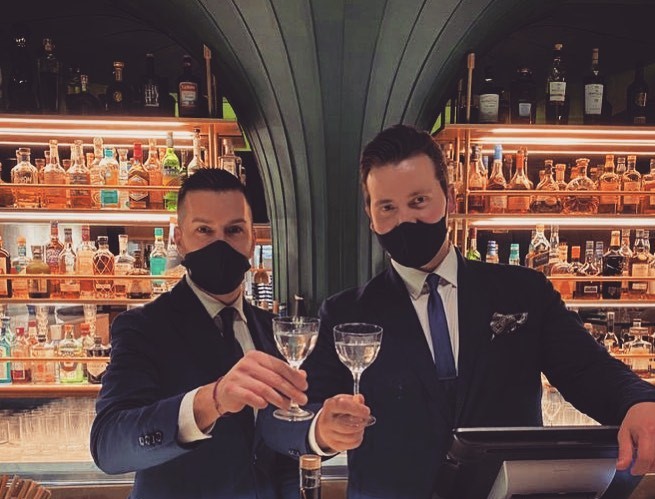 Gábor and Alessandro run the bar here and are wonderfully knowledgeable. This is a real destination bar. I spot a cocktail made with the wonderful Konik’s Tail vodka. The St George Gimlet is balanced out with Italicus, rhubarb and orange cream. Alessandro also introduces me to a little-known spirit named Sotol, which he thinks will be the new Mezcal. Sotol is the Spanish name of a flowering plant native to North Mexico, and is commonly known as Desert Spoon in English – the alcohol it produces can only be described as the naughty cousin of tequila and mezcal. In a beautifully made Margarita, the smooth, bright grassiness of the Sotol contrasts very well against the salty lime deliciousness of the cocktail.

IT London is definitely a fantastic choice for date night, catch-ups or as a run-up to a big London night out. The live DJs in the evenings combined with the killer cocktails, beautiful clientele and glamorous surroundings (make sure to check out the mind-bending toilets), make IT London a destination to eat in, drink in, and most importantly, to be seen in. Ibiza no longer seems so far away.

All imagery courtesy of IT London