Eighty-five degrees Fahrenheit it said on the gauge. The air conditioning was blowing a chilly treat and I had just discovered the button that operated the cooling seats. Thus, crawling traffic was of no consequence to me as I awaited my turn to cross the border from Switzerland into Italy just north of Como. I was in a good place. Milan and Bologna still lay ahead as I crept forward to pass into the Lamborghini homeland. I was half-expecting the hammers and anvils from Il Trovatore but what I actually received was an officious knock on the window from a surly customs agent asking me to pull over. 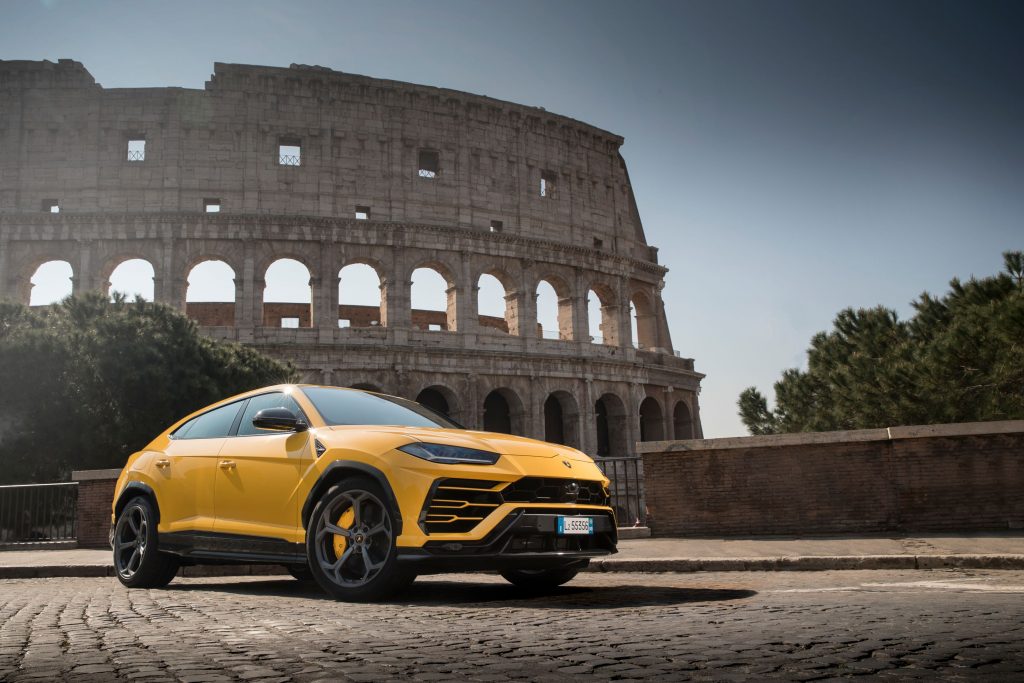 Maybe I looked too disreputable to be driving such a beautiful beast as the Lamborghini Urus? Or maybe, hopefully, I looked too young? Whatever the reason I found myself subject to awkward cross-lingual questioning about how much money I was transporting amid general disbelief that I was merely taking the vehicle home to the factory after the Goodwood Festival of Speed. My singular lack of fluency in either language did not help. 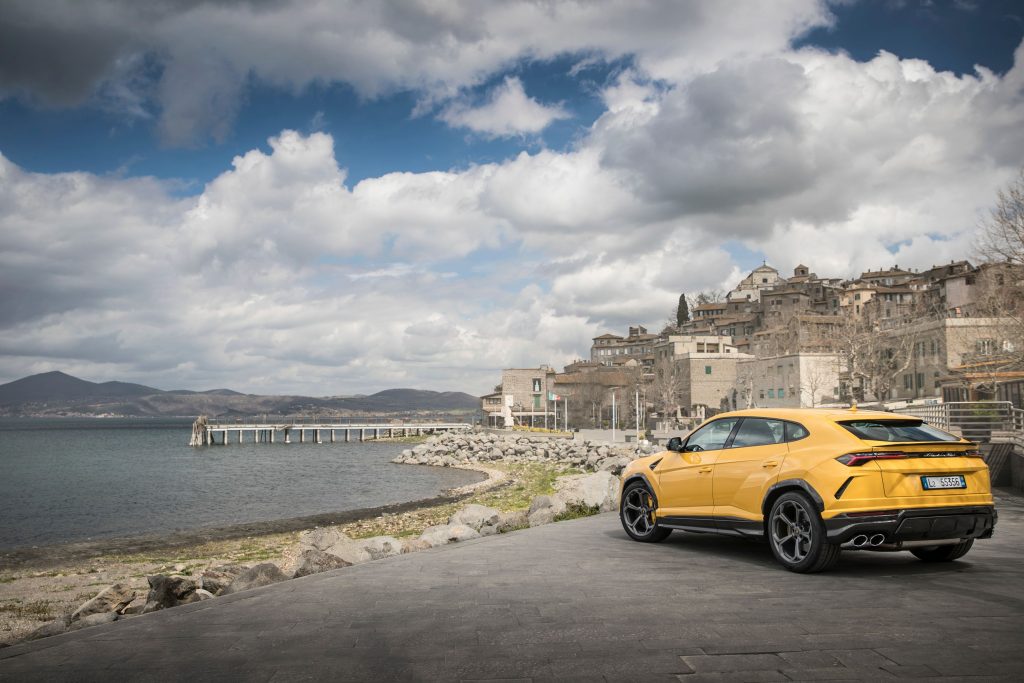 At first sight there’s nothing about the Urus that is anything like as staid as these other offerings from the parent company’s stable. With a Star Wars fighter-pilot cockpit perched above rakish angles it hints at lunacy without actually screaming it. My first impression was that the roof would (should?) lift up on hinges as a means of entry. But really the exterior is just maskirovka. Beneath the skin, the Urus is as comfortable and confident a driving machine as I have ever had the privilege to step inside. The cocked eyebrow of surprise that this engenders actually makes it feel even more special.

In the course of four days I drove over 1,000 miles across France, Germany, Switzerland and Italy and, while I am eternally plagued by a creaky back, I had no issues whenever I stepped out to top up my caffeine levels. While tiredness did creep in from time to time, notably and nervously at midnight on the unregulated autobahn, the car itself never faltered or delivered anything less than superb performance. The seats, cooled or otherwise, were structured pillows and the ergonomics of the electronics were all within reach and sensibly laid out for ease of use. My perpetual grumble about touch screen infotainment systems was somewhat mitigated by this being an Italian-registered vehicle and thus, as a right-hander, I was able to navigate the screen with my dominant hand. Rather too many systems for my taste are controlled via the touch screen but, happily, redundancy was built in and I could find analogue alternatives when needed. 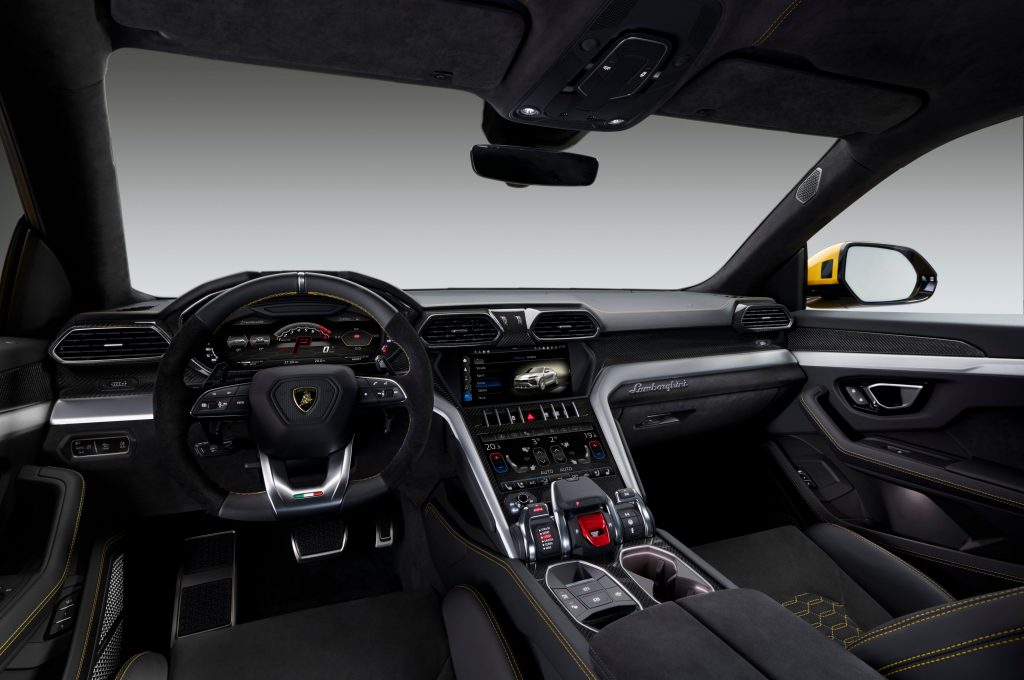 The satnav faultlessly carried me across unfamiliar routes to whatever destination I so desired. I challenged it to find a particular hotel in the middle of France as a test and, despite said hotel’s rural location, it didn’t blink an eye. The only time it faltered was, as hinted at earlier, in Milan where it couldn’t find my hotel in a warren of one-way streets. There seemed to be no way to reach the top of the one-way street and, despite being able to lean out of the window and physically touch the entryway to the hotel I couldn’t actually drive there. Legally. 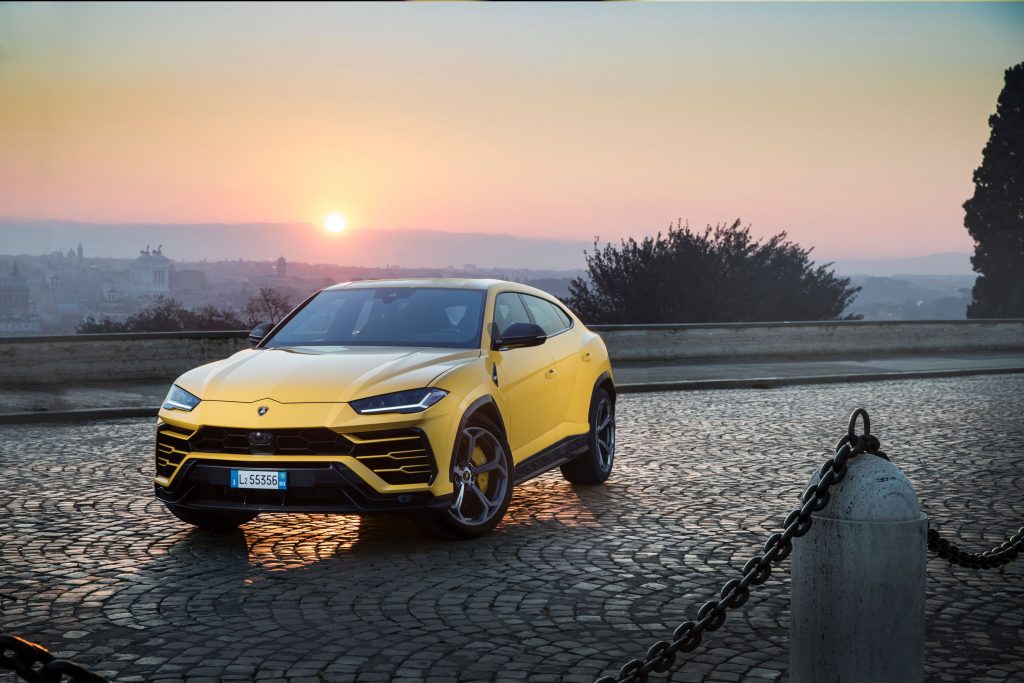 Lamborghini has fitted some psychopathic engines to its cars over the years but here, despite the weight of the Urus, it has bowed to modernity, fitting a 4.0-litre twin-turbo V8. Could this be an asthmatic Sisyphus pushing a boulder up a hill? Not a bit of it. Somehow this little manufacturer has engineered 641bhp and 627lb ft of torque that rearranges your internal organs if you so much as sneeze at the wrong velocity. It doesn’t even feel top-heavy as you lean into a corner at slightly-too-fast speeds. Somehow, technology and the boffins have mastered a defiance of physics and produced an imbalanced SUV that hunkers down and feels sportier than it has any right to. 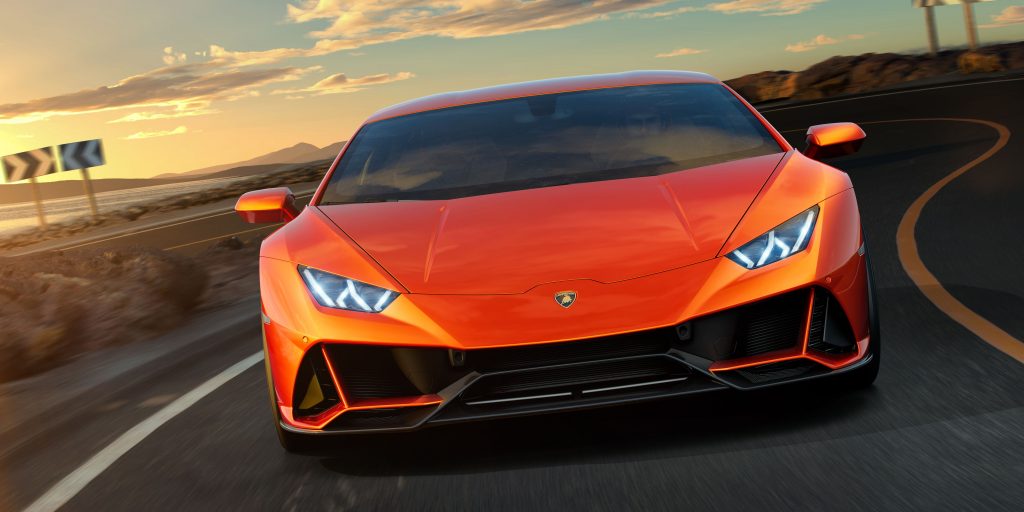 Speaking of engines brings me on to another offering from Lamborghini. I was also given the latest iteration of the Huracán for a few days. The EVO is, as the name may suggest, the evolution from the original Huracán, through the Performante to today’s example. This car, while it has screamed into the 21st century, hasn’t been fitted with the turbo-ed V8 lump found in the Urus. Oh no. This has the full-beef-and-testosterone naturally aspirated V10 engine that howls at the full moon. And at the crescent moon and, indeed, at the sun. 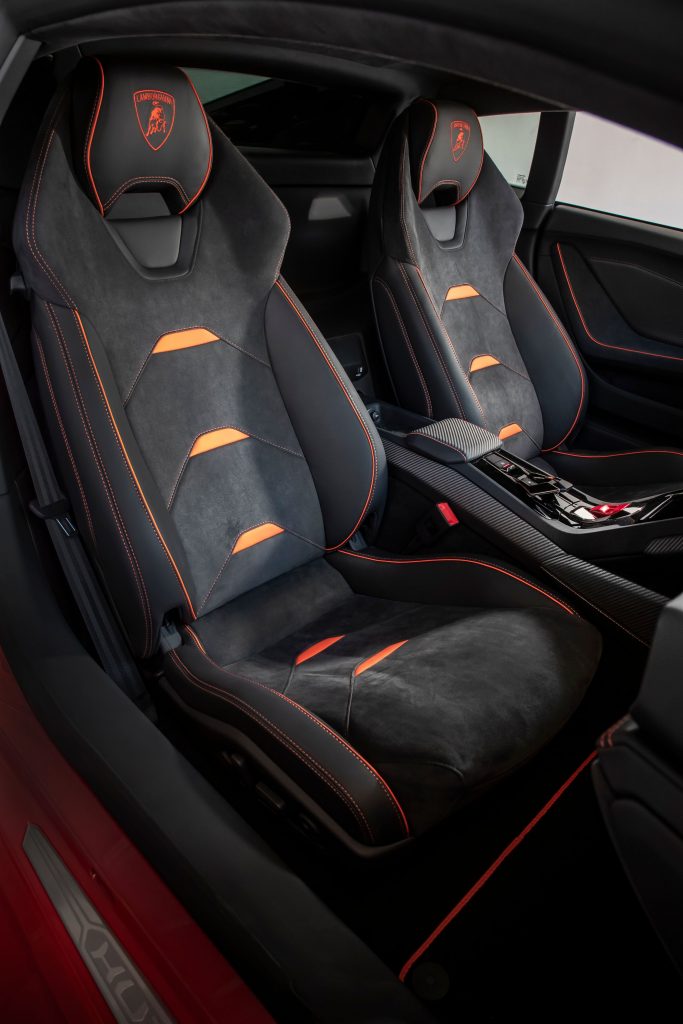 There’s so much wrong (for me) with this car. Let’s start with that creaky back I mentioned earlier. The EVO is a car you get into with all the elegance of a collapsing Meccano set and out of like you’re ducking incoming sniper fire. It is desperately low to the ground which means if you park next to a kerb you’re not going to be able to open the door. If you or your passenger happens to be wearing a skirt then please swing out both legs together or your charms will be shared with the world. 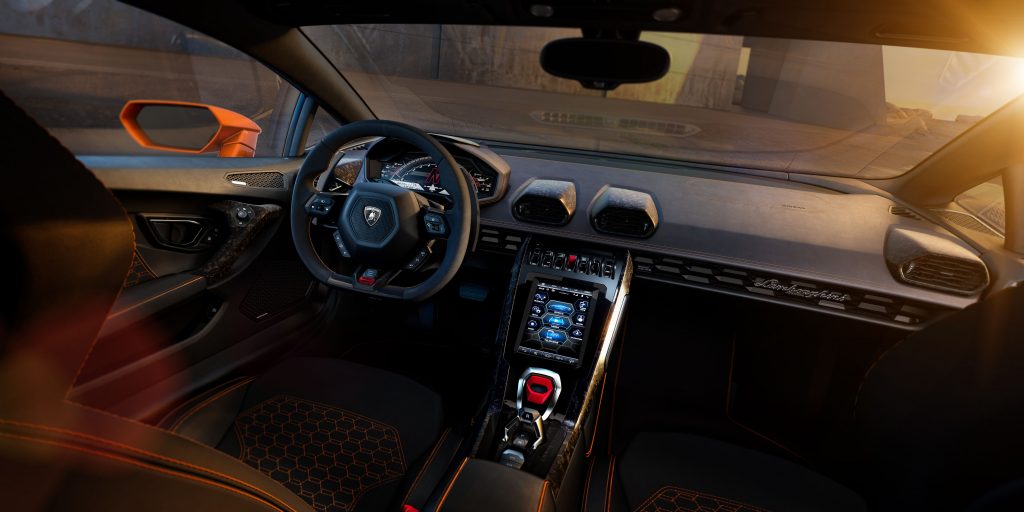 The EVO is also not fitted with the most comfortable of seats. Not for this beast the multi-way adjustable squabs and bolsters. In fact, I’m not a hundred per cent sure there wasn’t a strike in the padding department the day this car’s seats were fitted. If you keep your billfold in your back pocket when you get in you’ll end up wishing you were poorer by the time you clamber out.

I found myself on the M4 motorway heading to Wales when a huge rainstorm centred itself meteorologically right above me. The sprayback from the wheels rose as high as the wing mirrors which gave an unnerving feeling of being in a submarine. As I was in a matt-grey-painted vehicle (Grigio Artis according to the spec sheet) I did find myself somewhat fearful and wondering if the articulated lorries alongside could actually see me through the torrents. 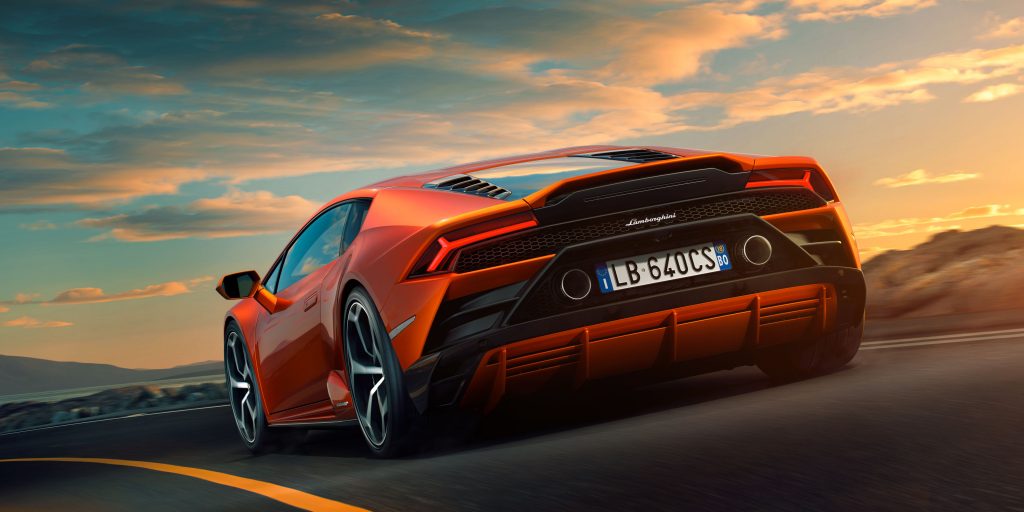 Reversing or parking Lamborghinis of yesteryear was always a challenge (or so I’m told, as the EVO and the Urus are my first experiences of the marque). Visibility backwards over the engine was always negligible and there were more blind spots than for Stevie Wonder. So it was a pleasant surprise to find that visibility is actually rather good for the EVO. I have a number of oblique corners near my house and I never felt I would have to cross my fingers, stroke a rosary and say a prayer to join traffic.

The reversing camera is a blessing too with the all-round cameras showing you just where you have to place the car to park efficiently. Although putting the display on the dashboard behind the steering wheel is awkward. As soon as you start turning the wheel you lose sight of your parking target. With a touch screen in the middle console surely the display could be located there? 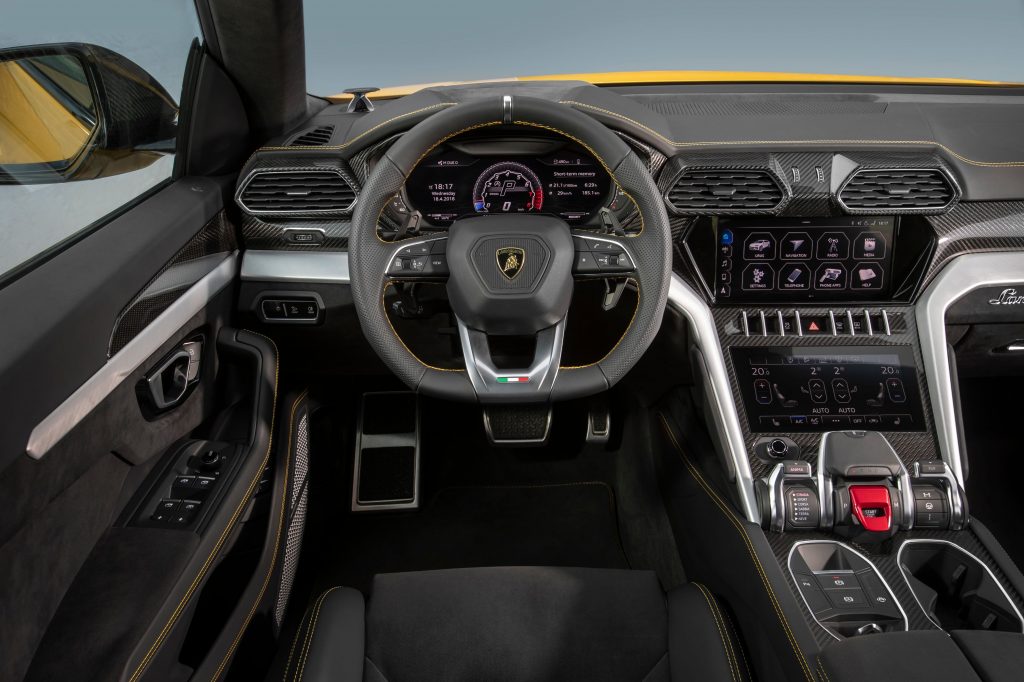 That central screen controls almost everything in the EVO. Unlike with the Urus earlier, there are few, if any, analogue alternatives. It was almost impossible to change the volume on the stereo while moving. This wasn’t just because the car was right-hand drive and I can barely turn on the light switch in my office with my left but because the suspension is as hard as any I have ever come across. Truly it was possible to tell the mood of the road workers on the day they laid certain strips of tarmac.

But really all the above is just the warm-up act to the headline show. Something you have to undertake to get to the reason you bought the ticket in the first place. The drive.

This is a fabulous driving experience. Forget the discomfiture and the squeaks, the EVO drives like it invented the process. The engine is magnificent. In Strada mode it starts off loud and only gets louder in Sport and Corsa modes. The all-wheel drive system means it’s planted at any given moment no matter your level of driving talent or when biblical levels of weather mean you’re looking in the mirrors for Noah in his big boat. 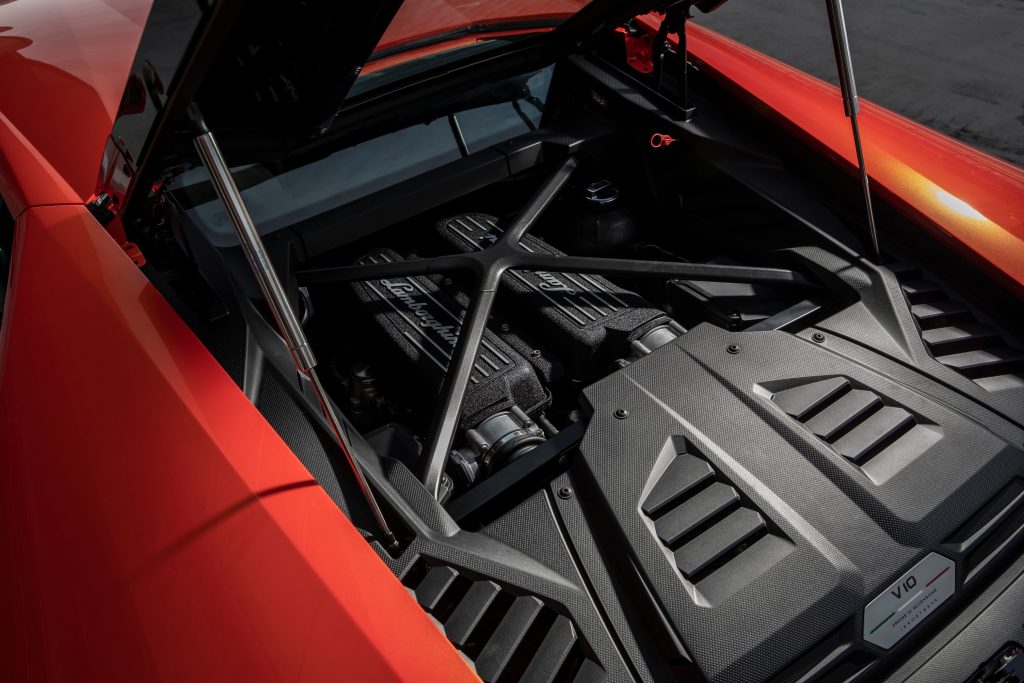 Lamborghini have introduced a central super-computer that harnesses everything the engine and the chassis have to offer and offers a predictive element that means you won’t end up parked backwards halfway up a telegraph pole. I’m not even going to try to describe how they do this because, quite simply, I don’t understand it. Suffice it to say that it is unbelievably easy to be ‘pootling’ along, look down and realise that the scenery is travelling past your window at 120mph. The only clue to this barrelling speed is the blur of jet aircraft as you pass by.

All this raises the heartbeat and pumps adrenaline round a jaded body. The EVO fizzes and pops as you drive it and it directly transfuses that to your body. You get out, inelegantly, at the end of your journey feeling alive and full of the joys of spring. 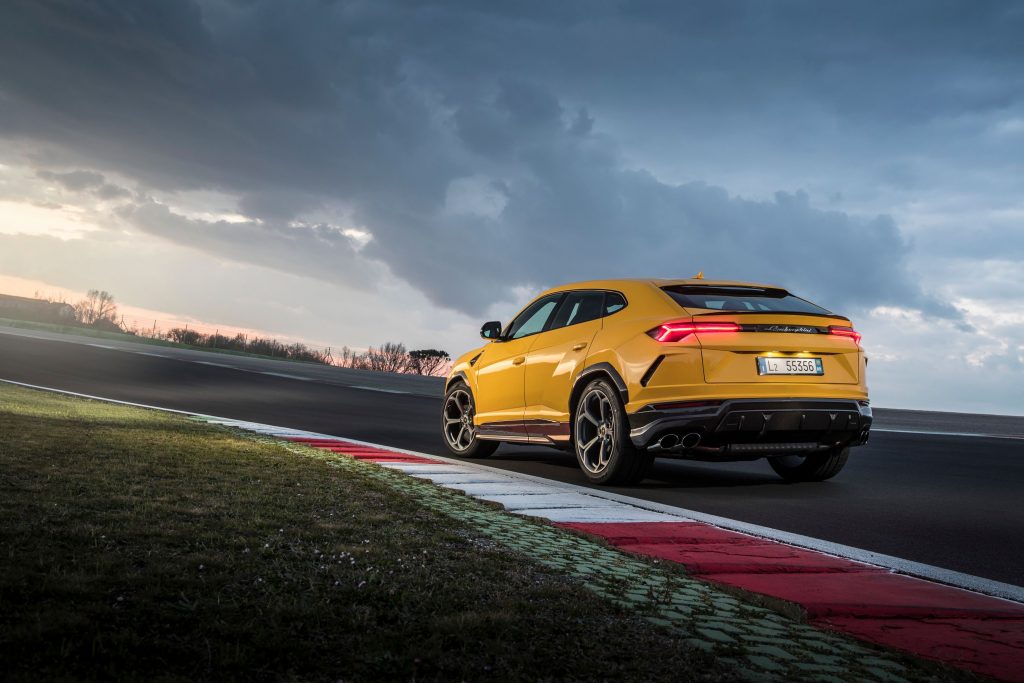 And so, it is with a certain amount of discomfiture but no little certainty, that I come to a conclusion. Lamborghini has produced two vehicles that are so far apart on the vehicular offering scale as to be out of sight of each other. The Urus is, without doubt, one that I would happily own, drive and be proud of on a daily basis. The price is high, certainly, when set against its nearest competitors, but really it is the only true super SUV on the market.

The Huracán EVO on the other hand, is bonkers. I wouldn’t buy it; I wouldn’t own it. If it somehow turned up in my garage I would rarely, if ever, drive it. It comes with incipient lumbago, buttock bruises and a marked tendency for the driver to feel like Captain Nemo in heavy rainstorms (of which we have plenty here in the United Kingdom). However, it is, and there’s no simpler way of saying this, both a super car and a supercar. That howling, soulful, singing V10 engine is worth the admission price alone. Audi’s technological input beneath the Lambo styling is gold dust sprinkled on the edgy grappa shot of bodywork. It’s wonderful. But I would have liked a cup holder that was noticeable by its absence.

Above all, with these two vehicles, Lamborghini has stayed true to itself. No matter the German-ness and sensibility of the fiddly bits, the soul of the original company croons through these cars like a (very loud) lullaby. Never, ever lose that soul please Lambo; there’s no future in the present if you fail to pay homage to the past.

All imagery courtesy of Lamborghini.