There are few occasions in my life when I’ve felt like a Bishop. Excluding perhaps the university party where I dressed as Gandalf (well, the robes are similar) and any time I’ve felt inclined to move only diagonally on a black and white tiled floor, my stay at The Culloden may be the closest I’ve come to divinity.

However, while Culloden was once the official residence of the Bishops of Down, Connor and Dromore, those days are long gone, with the current Excellency residing in the vastly more modest surrounds of a detached house in the suburbs of west Belfast. In the absence of its most devout former occupants, The Culloden has also evolved, and after becoming Northern Ireland’s first five-star hotel in 1996, is now best-known for playing host to many of the country’s celebrity visitors. 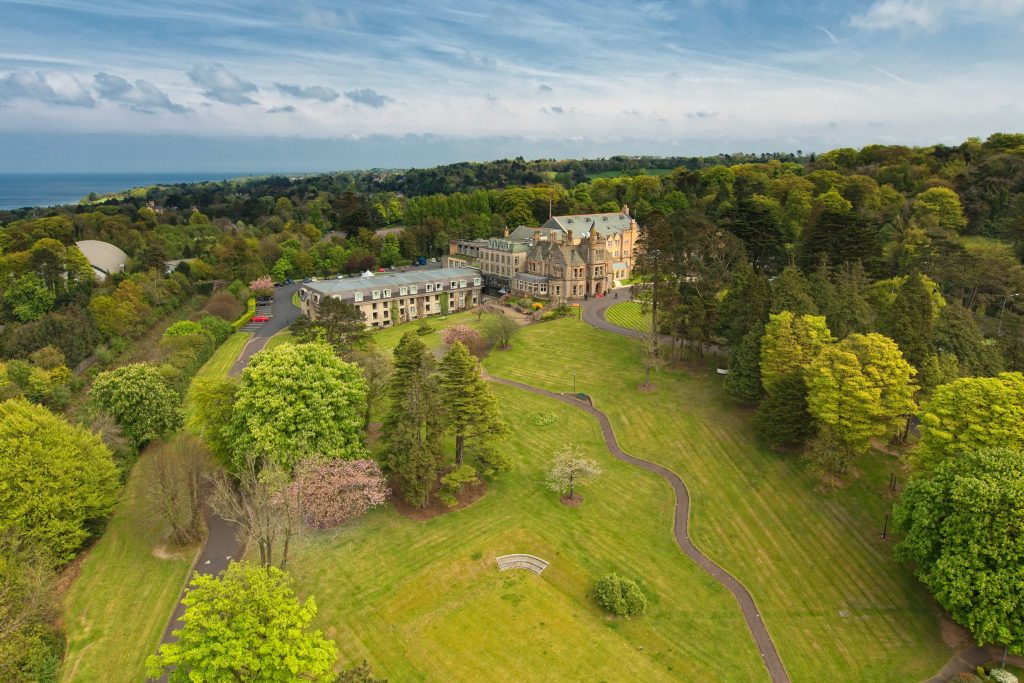 In fact, I’ll admit that the first I heard of it was when Alec Baldwin posted a slightly wonky photo of some neatly manicured lawns leading down to a body of water captioned ‘Culloden. Not Montauk. The other one…’. Confused as to what he was doing in Scotland, I did a little digging and found that far from a battlefield outside Inverness, or beach overlooking the Long Island Sound, the view was from the refined lounge of the Culloden Estate and Spa in the Holywood Hills just north-east of Belfast. 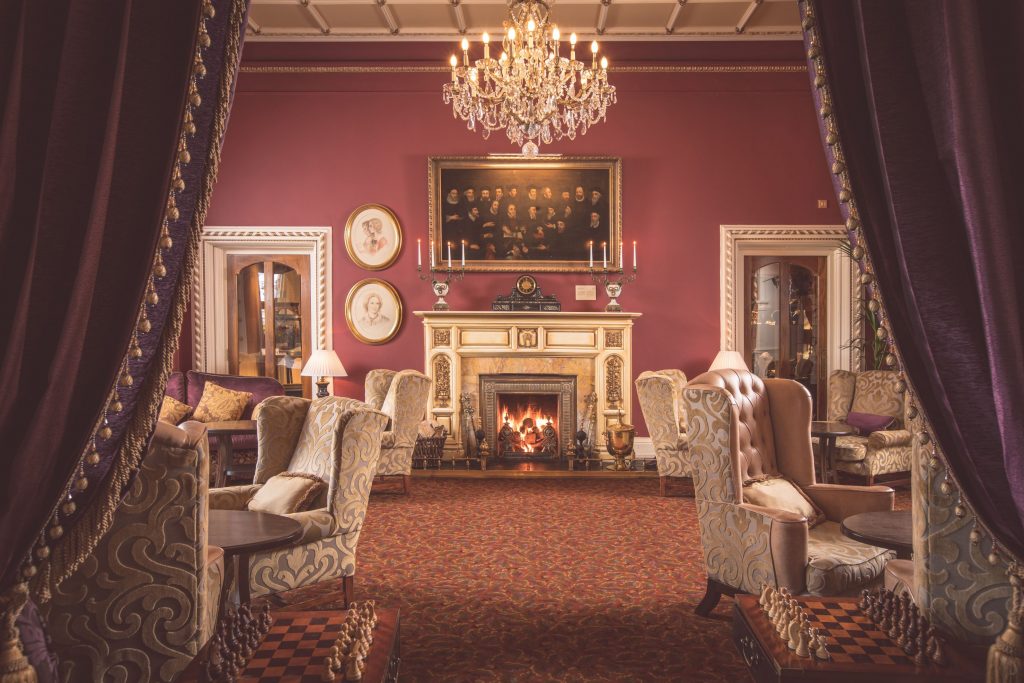 This reputation as the preferred haunt of a range of luminaries who swapped Hollywood for Holywood, from Tom Jones and Kylie Minogue to a host of politicians, is well-deserved, with every little detail catered for. In fact, it’s hard to avoid a teasing sensation that you may be padding in their footsteps as you pace across the soft carpeted floor of one of the sizeable state suites that remain in the original palace building. 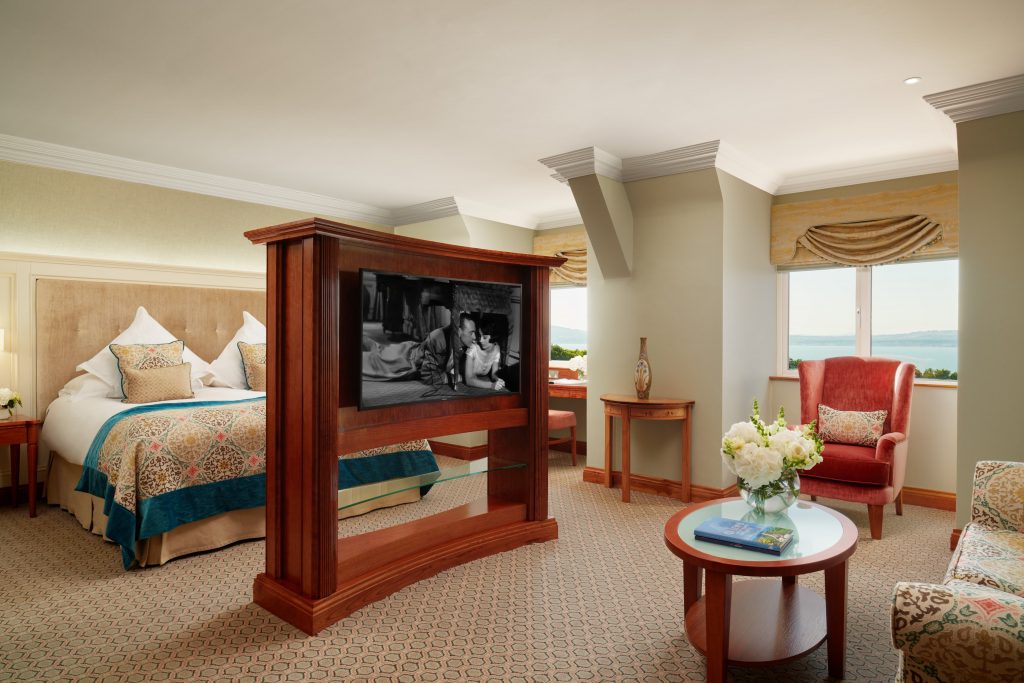 Each room is in fact individually appointed with some boasting high ceilings whilst others in a more contemporary style. All Junior Suites have spectacular views of manicured gardens or Belfast Lough along with deep soaking bath tubs. I sip on a pre-dinner glass of Champagne in our sitting room and wonder whether Tony Blair was this exasperated by Cherie’s indecision over which shoes to wear to dinner? 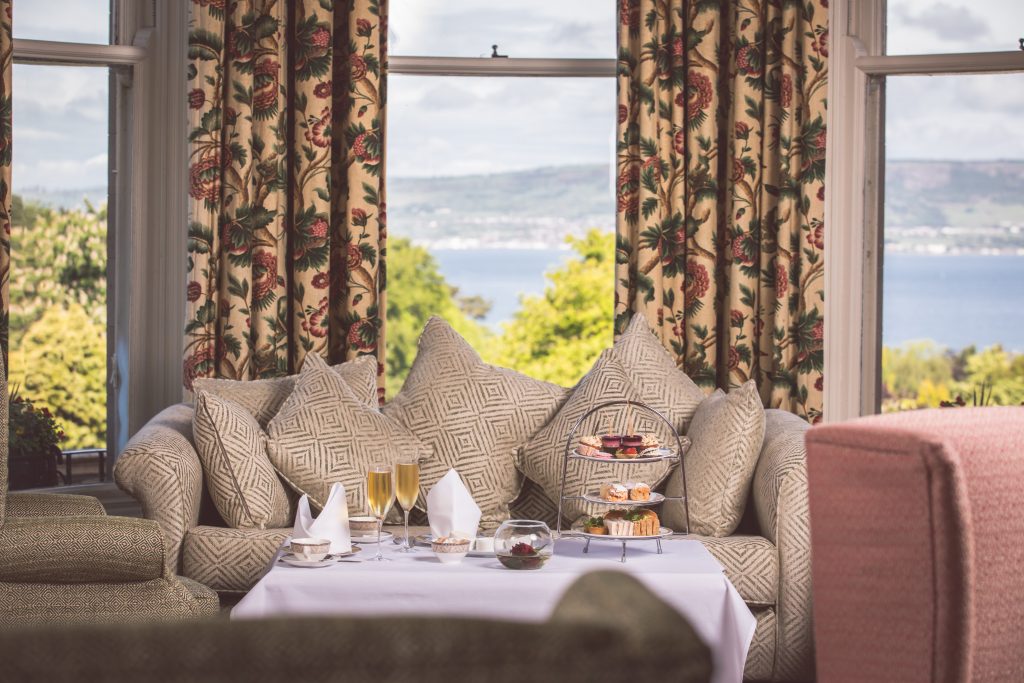 Wardrobe dilemmas resolved the meal was taken in the most formal of the Estate’s dining options, Vespers. We enter this teal and wood-panelled gothic dining room and take our seat in front of a blazing copper-backed fire. 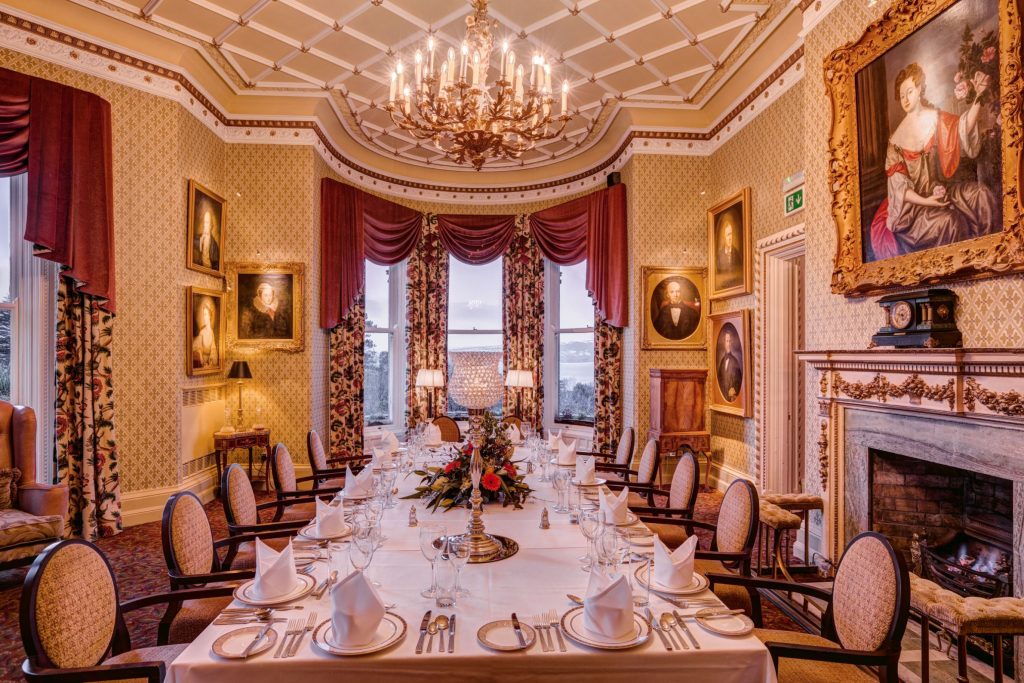 My first course – a  tight scrunch of scorched beef carpaccio glistening in the blood-red of the balsamic dressing. The dictionary definition of melt-in-the-mouth, and edging through sweet towards earthy thanks to the pickled wild mushrooms.

Across the table, a platter of smoked salmon, from the iconic Ewing’s fishmongers of Shankhill Road was joined by a chorus of samphire and capers. The exquisitely filleted fish carried a rich dry smoke tempered by the vinegar of the sour buds. 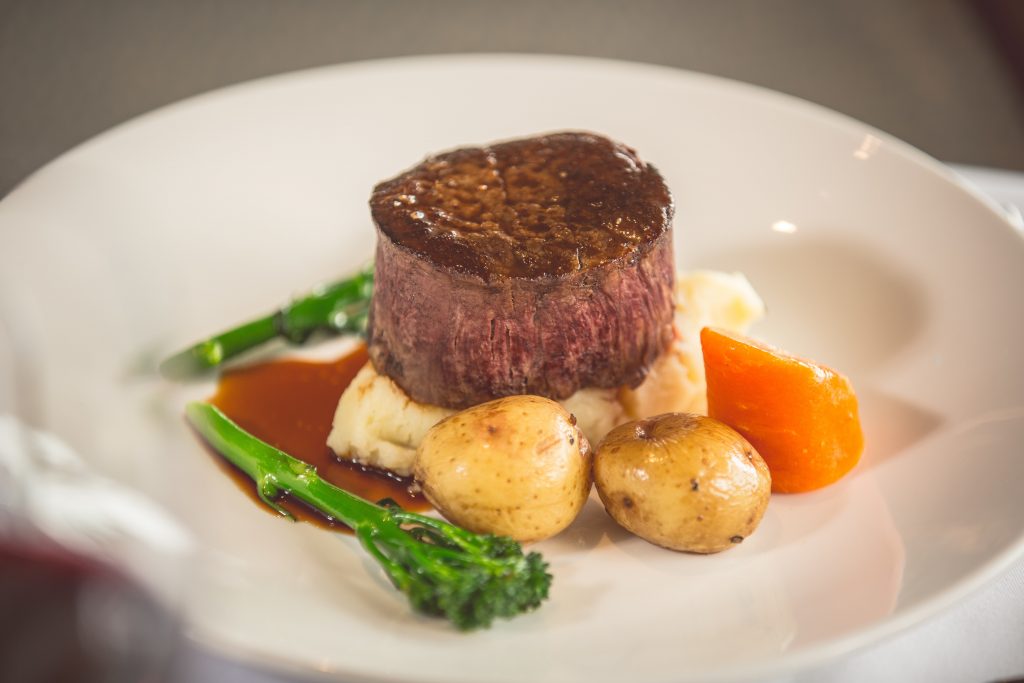 Then, three plump thumb tips of roasted venison loin were accompanied by a lightly charred house brick of potato terrine, celeriac and thyme jus, while the grilled fillet of hake with scallops, boiled potatoes replacing the mash and nutty beurre noisette was rich and creamy-soft.

Alongside this, a red wine from the southern Rhone, chosen from a comprehensive list delineated by region. It was a bold, dry and low tannin drop with heaps of dark cherry, peppered leather and liquorice that more than held its own alongside my venison.

To finish, a sharp and light crème brûlée with a top like stained glass and a side of the softest shortbread before a Shortcross gin bramble and a drop of Redbreast in the lounge. Truly a meal fit for a pampered man of regal scarlet-trimmed robes. 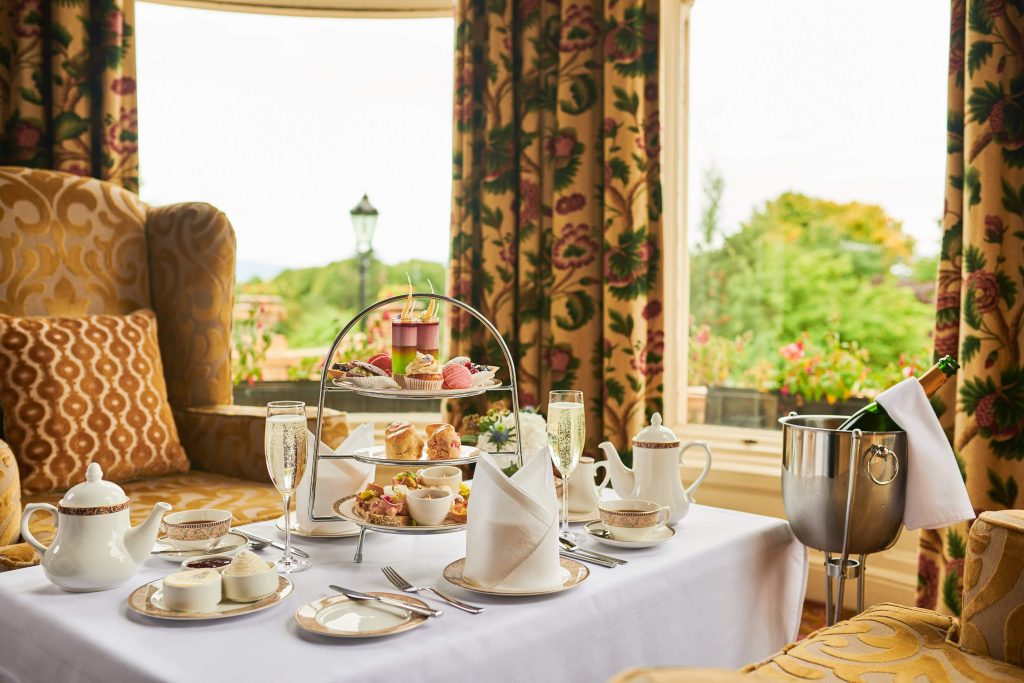 Back upstairs, a long night’s sleep was enhanced by the use of fully functioning wooden shutters that kept our dual aspect bedroom pitch black until a soft knock at the door brought us our breakfast in bed. Not from a soft-shoed curate, but two heavily-laden waiters who deposited a tray of local salmon and eggs and a more exotic bottle of something French and sparkling. 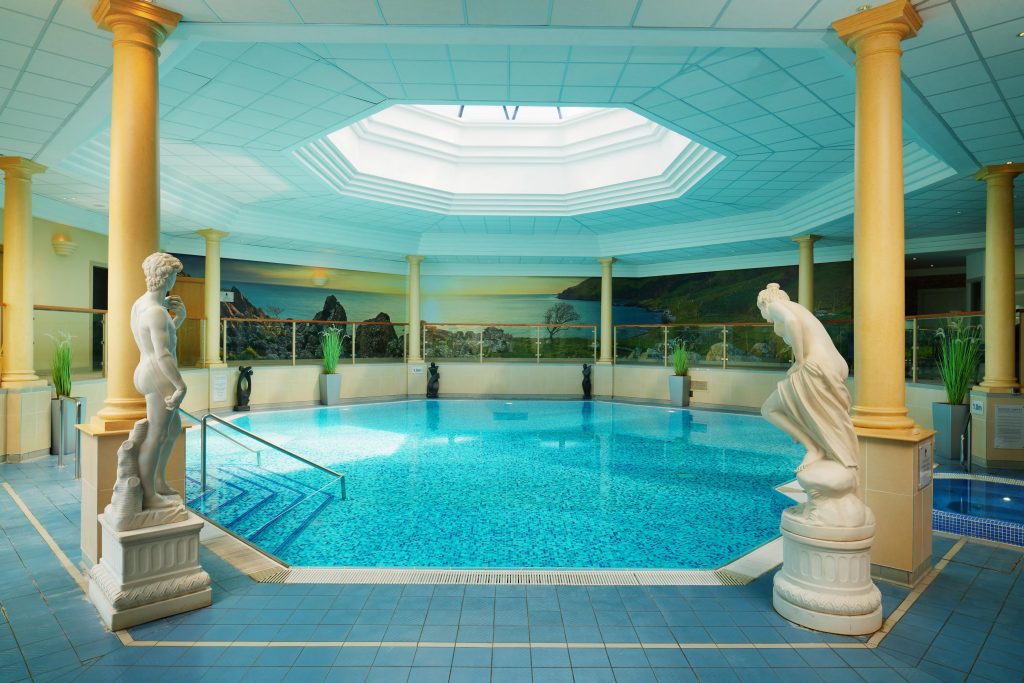 Suitably digested thanks to a walk around the grounds and herb garden, the late morning was spent in the spa in the heated pool and bubble pool. Comprehensive ESPA treatments and a juice bar proved more of an attraction than the gym before a short taxi ride into Belfast for an afternoon’s exploration. 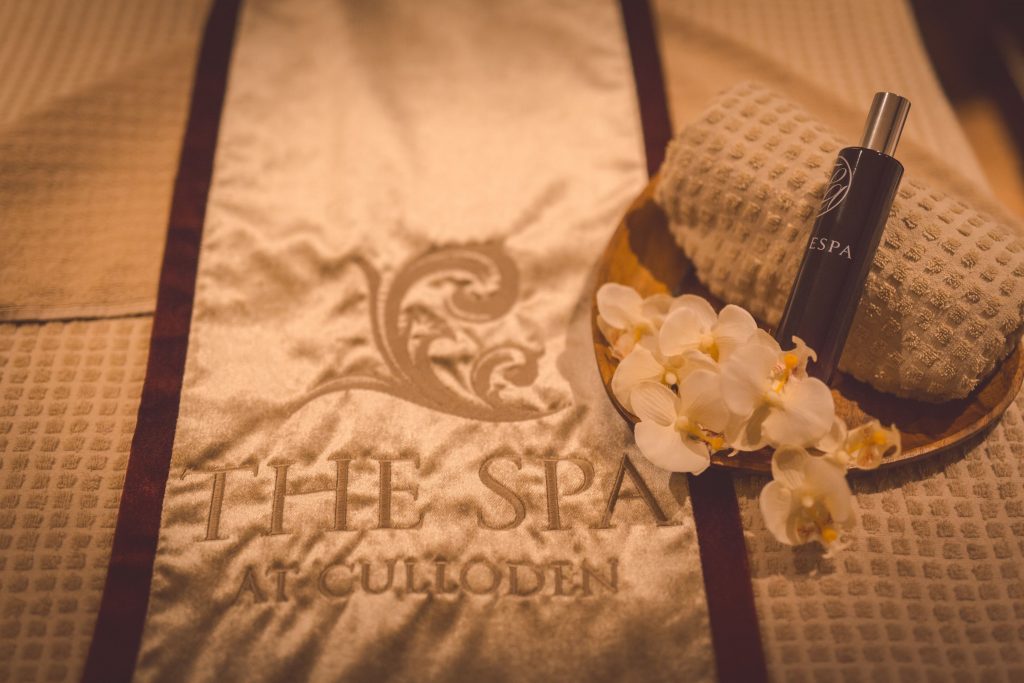 From the imposing tower of the main entrance that looms over you as you approach, through the grand lobby and up the chunky wooden staircase, this is a hotel that was built on an epic scale. 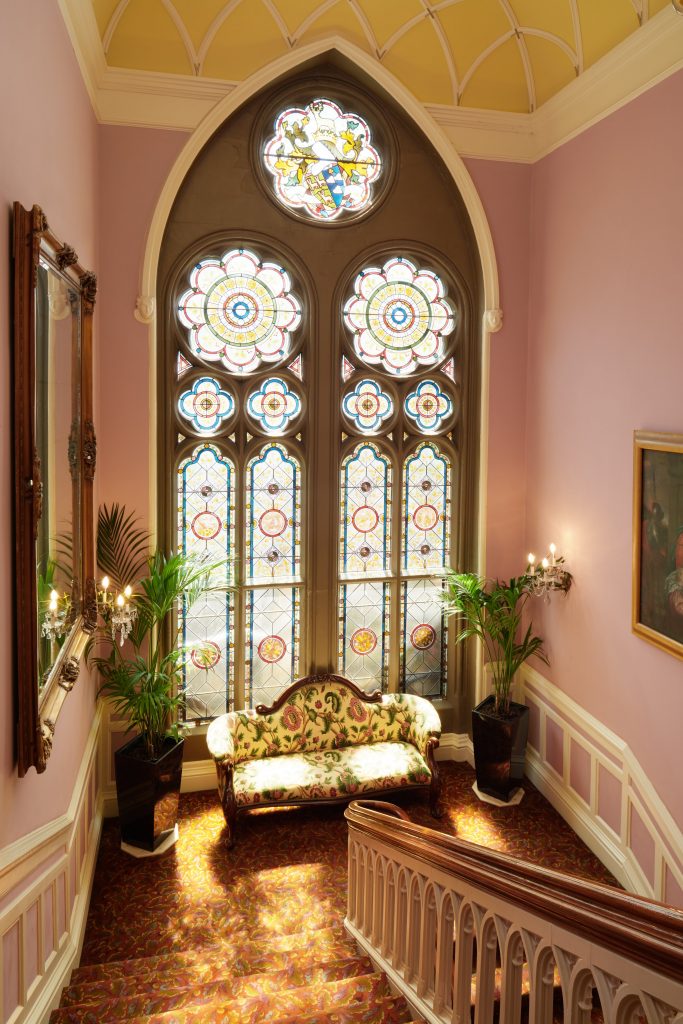 The liberal application of stained glass and gothic windows, as well as the grand luxury of the Lough Bar (once the chapel), will leave you feeling regal and bordering on saintly for the duration of our stay.

All imagery courtesy of Hastings Hotels.