Our staycation in London: A night at Middle Eight

A luxury staycation in London was in order and the new Middle Eight hotel prides itself with its ability to combine the sexy, the sustainable and the state-of-the-art. 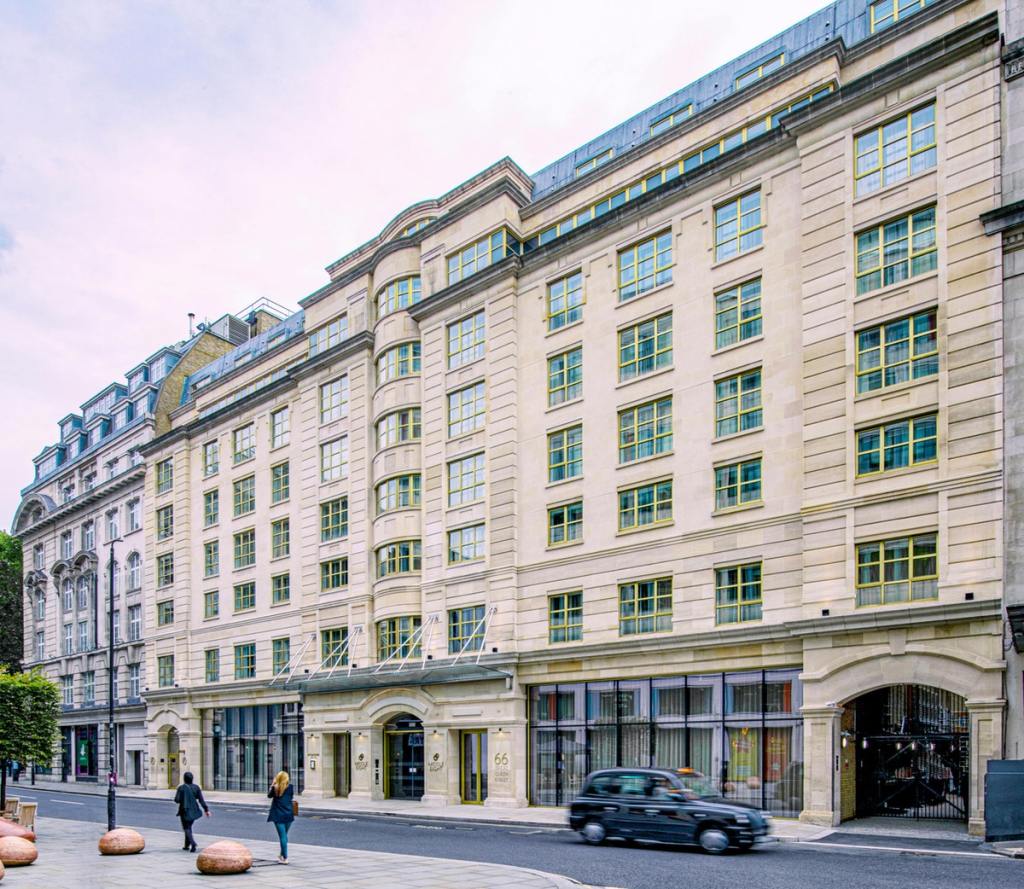 The hotel named itself Middle Eight in reference to its namesake in musical theory – also known as the bridge of a song. Just like a musical bridge, the hotel claims to add vibrancy and the element of new to the neighbourhood, in the heart of the vibrant Covent Garden. 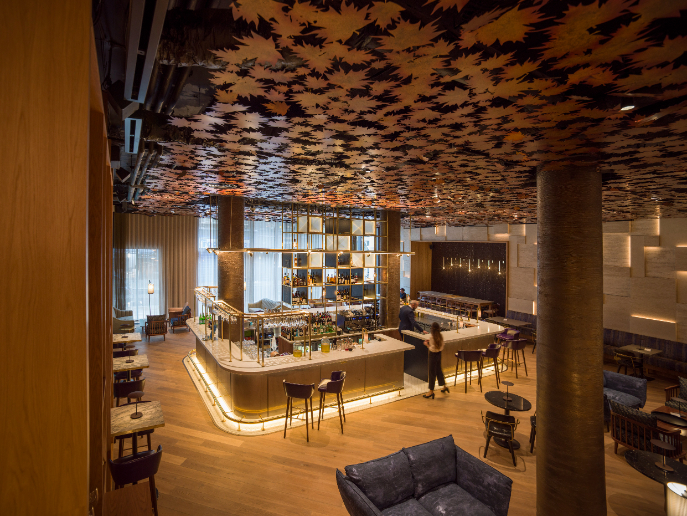 When I entered Middle Eight for my staycation in London, I was met with its grand and gold interior, its dangling and delicate lights, and the impressive stretch of fireplace built within the walls of the reception area, I tried hard to retain a critical eye – I really did. Georgia, the welcoming receptionist with a sleek hairstyle I could only dream of pulling off, sat me down in a plush velvet seat, checked me in and provided me with my room cards.

While in the lift and rising to the first floor, I thought she’d made a mistake. She had not written the card’s room number in her perfect handwriting, but instead the word ‘Downtown’. The lift doors opened and I clocked signs to sets of room numbers, then the hotel suite ‘Downtown’. Georgia wasn’t wrong. Of course she wasn’t. That hairstyle could rarely make a mistake. 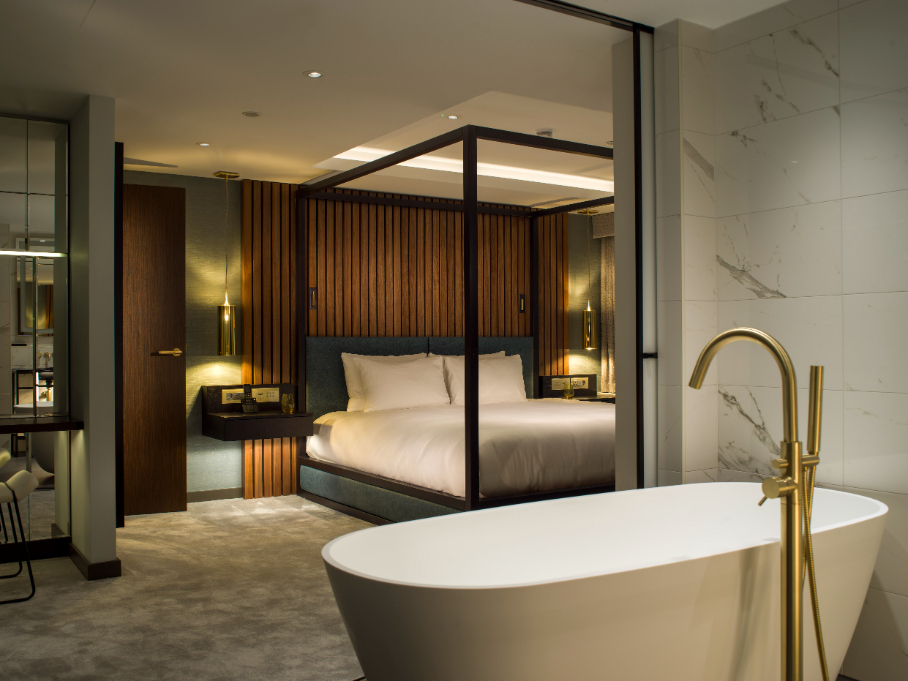 The major key – The Downtown Suite

When I entered Downtown, my eyes first alighted upon the indoor walled garden, which provided the illusion that I was situated in the heart of a rainforest as opposed to in the heart of Covent Garden. A long walk around the suite led me to discover an entrance area with a table, chairs and mini fridge; not one, but two bathrooms; a living room which boasted a cinema-style TV; and a bedroom featuring yet another wide-screen TV. The entrance area was kitted out with elegant cocktail glasses, shelves of hardback books, a mini fridge and a wooden set of noughts and crosses.

When my guest Kelly arrived, we jumped around in disbelief and had roughly ten conversations in two minutes – the effect of feeling giddy from that Middle Eight effect. 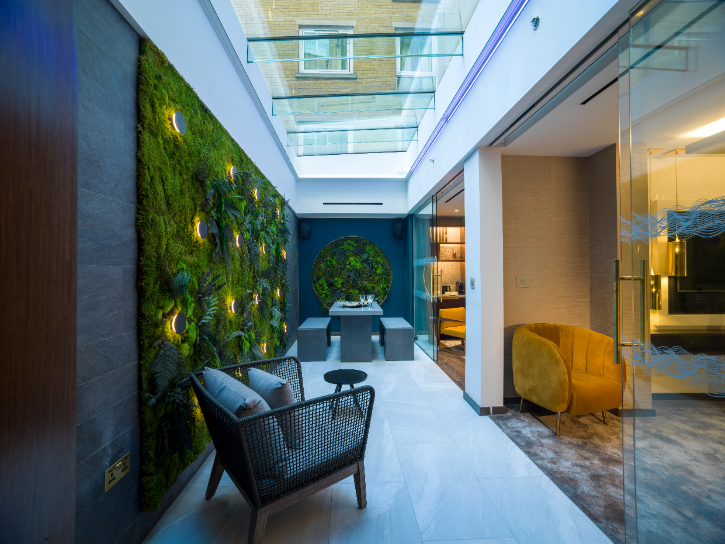 We ran our fingers round and round the dial of a touchscreen pad to change the lighting within the walled garden. The large potted ferns and bonsai trees appeared to turn from red to purple to orange. We marvelled at the toiletries which were packaged in tubes resembling posh acrylic paints. We lamely thanked Maya over and over, a member of staff who delivered us complimentary cocktails with paper straws (points for sustainability). Finally, having calmed down and dressed up, we headed for dinner. 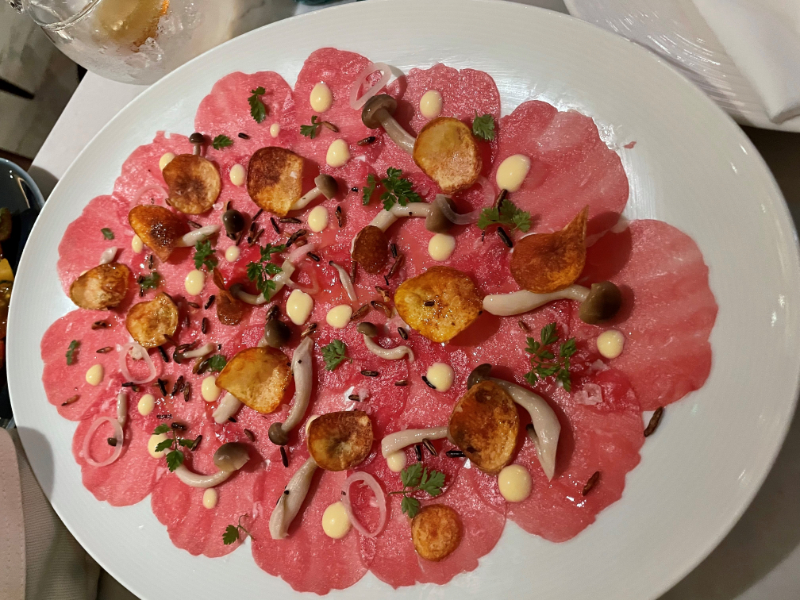 A symphony of courses at Sycamore Restaurant

Our staycation in London needed a suitable night out. The dinner atmosphere at Sycamore was lively and music provided the upbeat, energetic ambience of a Friday night – despite it being a Thursday. I began with a small dish of Cacio e Pepe, while Kelly settled on a starter of the Sgombro bruciato – a plate of torched mackerel, horseradish, and pomegranate. We also shared a stunning silky carpaccio of Longhorn beef with pickled mushrooms, potato crisps and truffle aioli. These dishes were good but it was our second course that led to a silence settling on our table. 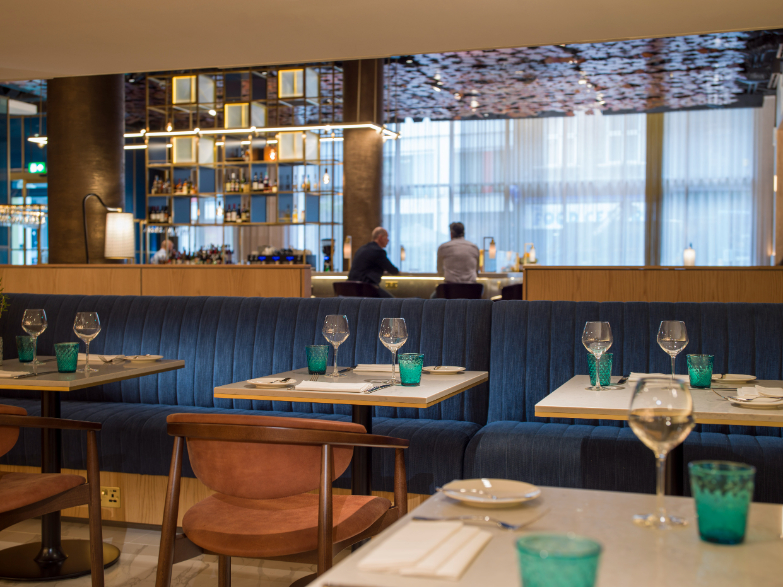 When food is this good, the table goes quiet —  an occurrence the Germans call gefräßiges Schweigen (literally ‘gluttonous silence’). My linguine alle vongole (fresh south coast clams, parsley, garlic and white wine) could have contained ingredients caught off the coast of southwestern Italy that morning. Kelly’s Ravioli al tuorlo was presented as one large slab of ravioli —  a delicious, zesty square of spinach, ricotta, egg yolk, pine nuts and lemon mint. The egg yolk was preserved soft-cooked inside, oozing out the large pasta square as a sauce when cut into. Both meals were very reasonably priced – the linguine costing £12, and the ravioli a mere £8. We enjoyed our Italian feast with a carafe of white: the Madregale Bianco, relishing its smooth and buttery taste. 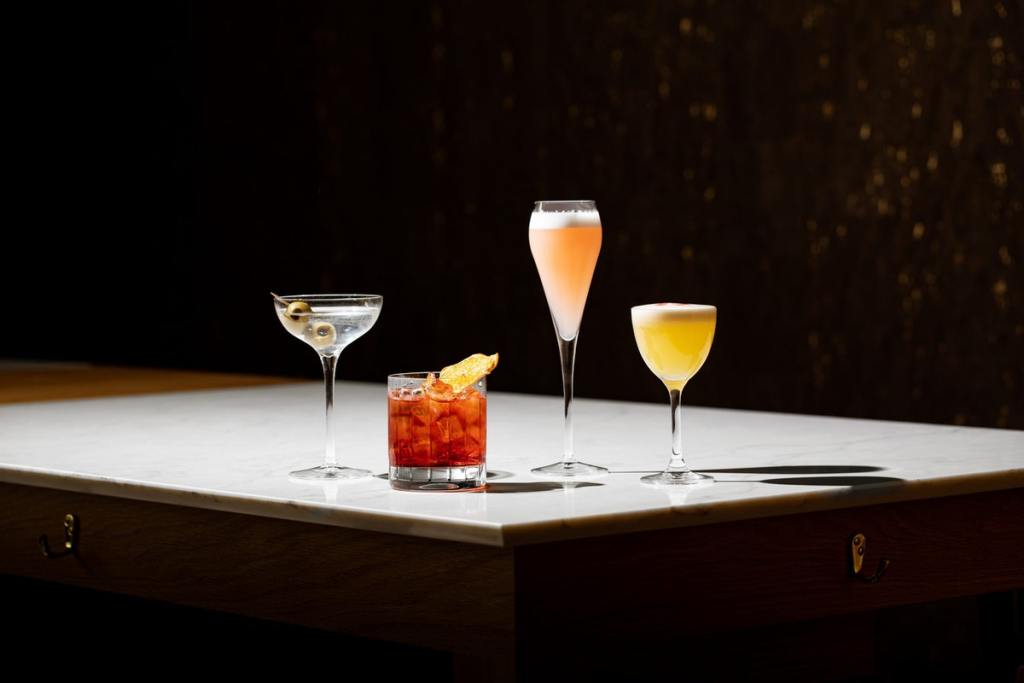 The bar here is also worthy of a night out alone. The expert mixologists can prepare whatever you like, but there is an eye catching Negroni menu with 15 Negronis. The rosemary infused Negroni was delicate and balanced. There is also an original five strong Grappatini list of Grappa and vermouth for a punchy and original end to dinner.

With full stomachs (and the temptation to unbutton my trousers in a public place), we turned our attention to the soundtrack that had been chosen for dinner and bar guests alike. The sounds of Simon and Garfunkel jolted on to hip-hop track Freak of the Week, which was followed by the primal tones of Shirley Bassey’s Diamonds are Forever.

Following a sublime Bloody Mary for me, a classic Gin and Tonic for Kelly, and a gracious goodbye from Julian, we considered exiting the hotel for fresh air. Truth be told, it was a quick rejection: we did not want to waste a minute of time that could be spent in our suite. 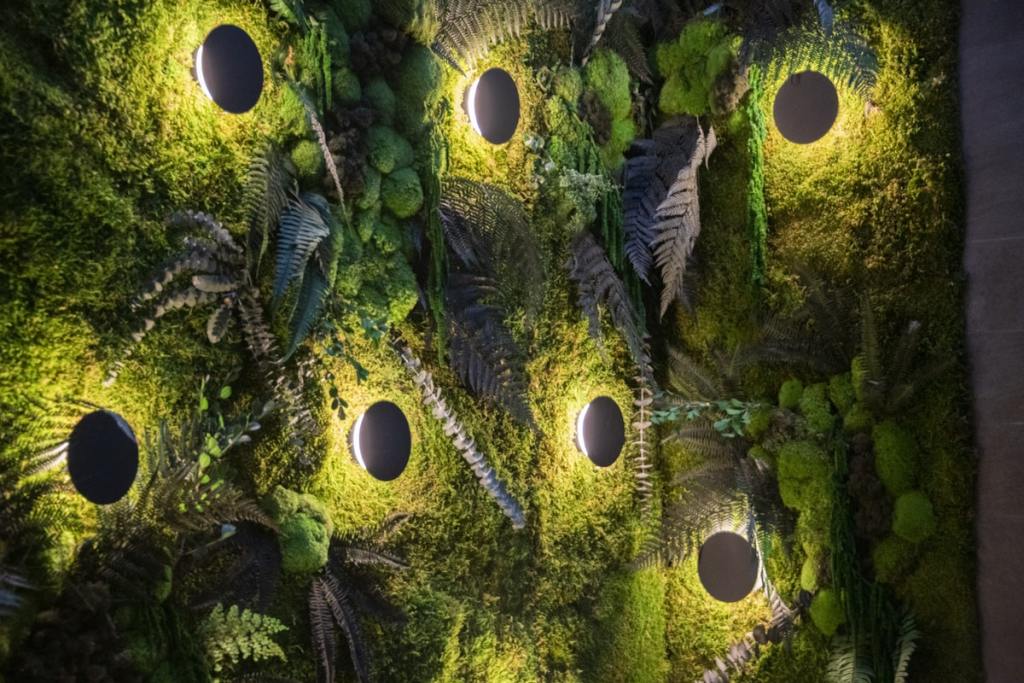 Back in Downtown, we brewed a couple of teas on offer – mint and chamomile – and prepared for bed like two girls at a sleepover. The feeling like we were dating someone out of our league in this suite had not escaped us, and we were exhilarated by the sentiment. Middle Eight was Isla Fischer, while Kelly and I were merely Sacha Baron Cohen. Middle Eight was the legs of Abbey Clancy, and we were the legs of Peter Crouch.

I ‘shut down’ Downtown, using a fancy tech pad to automatically draw curtains, wind down the blinds and switch off the lights, and we found ourselves lying in our king-sized bed watching the opening credits of Notting Hill. I have decided there is no better place for a 1990’s Hugh Grant to be projected – nay, his voice to be heard – than on a wide-screen TV from a London hotel bed.

The dreaded 7am alarm woke us up in the morning from our white cloud of a bed, and we both wished aloud that we didn’t have a job to begin two hours later. Breakfast was a quiet affair, with the choice of two meals from three sections: Bakery; Healthy; and Eggs. I opted for toasted granola paired with Greek yoghurt and fresh berries, along with eggs and salmon on sourdough bread, served with a generous helping of hollandaise sauce.

Once we had sadly ended our staycation in London and exited the pearly gates of Middle Eight, we were met with reality of the city which had decided to impersonate the Downtown suite’s power shower. When it rains, it really does pour. We ran through puddles and leaking drains to catch a bus, resembling drowned rats. It dawned on me no one could possibly know we had been guests of Middle Eight hotel heaven the night before. 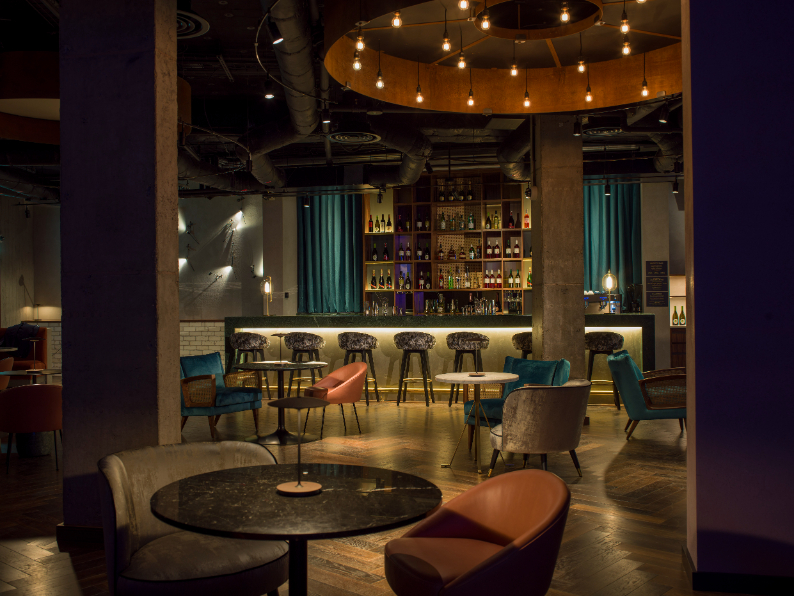 My staycation in London feature could aptly be summed up with the conversation Kelly and I had before we fell asleep.

The two of us lay in the dark, wished one another ‘good night’ and said our ‘I love you’s’. The silence buzzed around us as we waited for sleep to sweep us up.

“I feel like a king,” Kelly disrupted the quiet.
“Would you not say queen?” I replied, then remembered we can be whatever we want to be.
“We are kings,” I adamantly retorted.
“We are kings,” she confirmed.

Sleep then caught up with us, and we slept like royalty all night long.