Inside Al Mare: A Moment with Marco Calenzo

The Carlton Tower Jumeirah and Al Mare’s Executive Chef is Italian superstar Marco Calenzo. Over the course of his career, Marco has gained experience from across the globe, bringing his passion to Al Mare from a plethora of esteemed establishments.

We spoke to Marco Calenzo to talk about all things food, Christmas at The Carlton Tower and Al Mare. 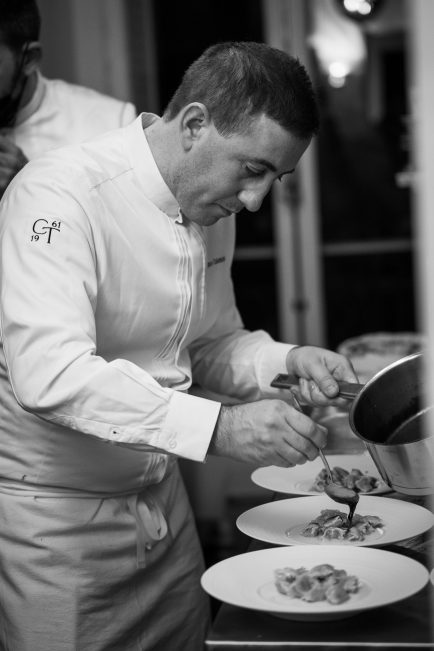 It began when my childhood best friend decided to study at Hotel Management School which led me to follow him in this new adventure. After a few internships in hotels and restaurants, I realised that this was the job I wanted to make my career. I don’t recall anyone in my family who worked in the restaurant world, but I believe that one of the reasons why I’m comfortable with food and hospitality in general is because my mother and grandparents were farmers.

Like in all farmer families, every meal was prepared in such detail. Food was seen as the common thread to unite families and friends on any occasion and these moments were the happiest from my childhood. We didn’t have much, however, we had each other and that’s what made me most happy. 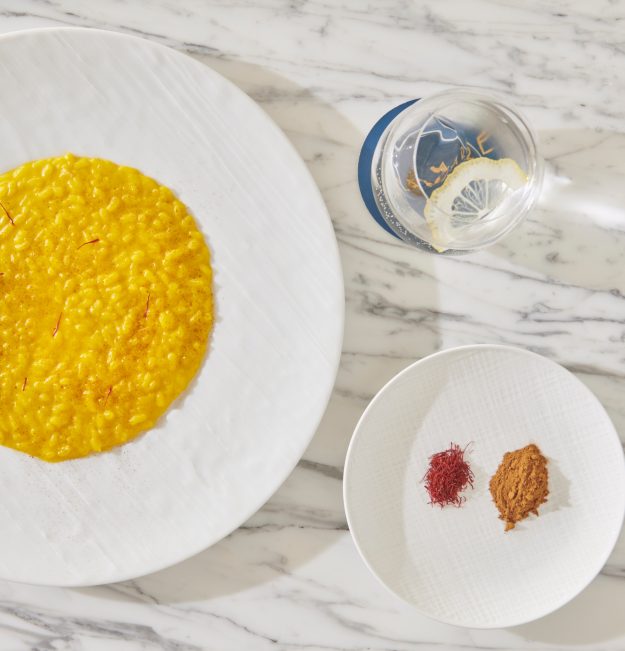 Tell us about your menu at Al Mare?

Although the name of the restaurant is Al Mare, the menu is a mix of vegetarian, meat, and seafood dishes. The menu at Al Mare was designed in partnership with the former CEO of Jumeirah Group. The focus of the menu is the quality and respect for the ingredients as we try to use all sustainable and organic products to stay as local as possible. For example, most of our seafood like lobster, scallops, and squid are sourced from the UK as well as our lamb, beef, and duck.

We also import ingredients that we believe are high quality from elsewhere – such as the Blue Fin Tuna which we source from a sustainable farm in Spain, the extra virgin olive oil and flour for the pasta from Tuscany, and our balsamic vinegar and risotto rice from Italy. 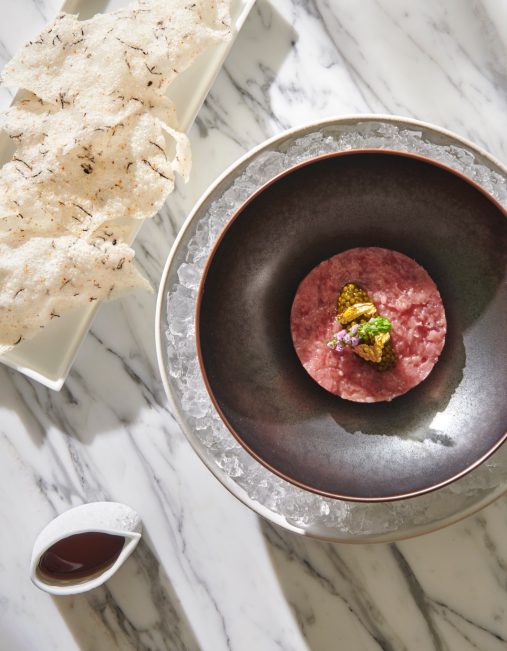 Across all Jumeirah hotels there is a rather special tuna and saffron arancini dish. What makes yours different?

The Tuna Arancini dish can be found in many other restaurants of Jumeirah, and I believe ours is the most interesting. This is because we use Blue Fin Tuna, not Yellowfin, which means the profile and taste are slightly different. Also from my experience as Executive Chef at Zuma, I know that the taste of Blue Fin Tuna is better suited for tartare and for this dish we use two parts of the tuna – “Akami” (leaner) and “Chutoro” (semi-fatty part closer to the belly). These two parts mixed with the dressing give it a special taste. I personally add a touch of homemade orange Ponzu which I believe makes it the perfect arancini.

What new flavour combinations or ingredients have recently caught your attention?

I would choose two ingredients that are not known to many, and I have recently enjoyed playing within my cooking.

Mastic – which is a resin obtained from the Mastic tree. It is also known as tears of Chios, being traditionally produced on the island of Chios, and, like other natural resins, is produced in “tears” or droplets. The flavour is bitter at first, but after some chewing, it releases a refreshing flavour like pine and cedar. For example, you could immerse a piece of fish in the melted Mastic, and cool it down in ice water. This will create a film of mastic around the fish that will not only bring flavour of the pine or cheddar to the fish, but it will protect it from the air and oxidation, which helps to create a crisper skin once you remove this from the shell and start to cook.

Beeswax – I like using beeswax, as Chefs are recently using it for aging or to preserve food, for example to age foie gras, or Pastry Chefs use it for cooking the famous Canelés de Bordeaux. I love using beeswax especially during springtime, as it protects the meat/fish from the air and oxidation. The meat ages well and has a sweet, soft, and intimate flavour with hints of pollen.

Any future signature dishes you are working currently that you can tell us about?

Lately, we have been working with the team on some new dishes to offer for the Christmas and New Year Menu. We are working on a version of duck which is a cross between the classic Peking Duck and the tradition duck which is cooked with the French technique. Long story short… a hybrid duck!

The reason why I’m proposing this new style is obviously due to my experiences in China and Japan in addition to my previous European experiences. I personally love the Peking Duck because of the beauty of its skin, which is superfine and crunchy when cooked. But personally I am not a lover of things that are too greasy and for this reason I prefer that the meat under the skin is cooked medium to medium rare so that it’s less greasy. This is where French cooking comes into play. To combine these two techniques, the ducks are cooked in a particular sequence. First, with the use of a compressor – I separate the meat from the skin, then the duck is balanced in boiling water and finally left to mature in an aging fridge for 10 days, before moving on to the cooking process. Any garnishes we add will be based upon the seasons.

How important is sustainability in the food you create?

Nowadays, I believe that sustainability is one of the key words for the future of the planet, and personally for my children. It is necessary to protect their future and work hard to ensure that the eco-system does not deteriorate. We work with many sustainable ingredients, and we ensure that we have knowledge about all the suppliers we select. 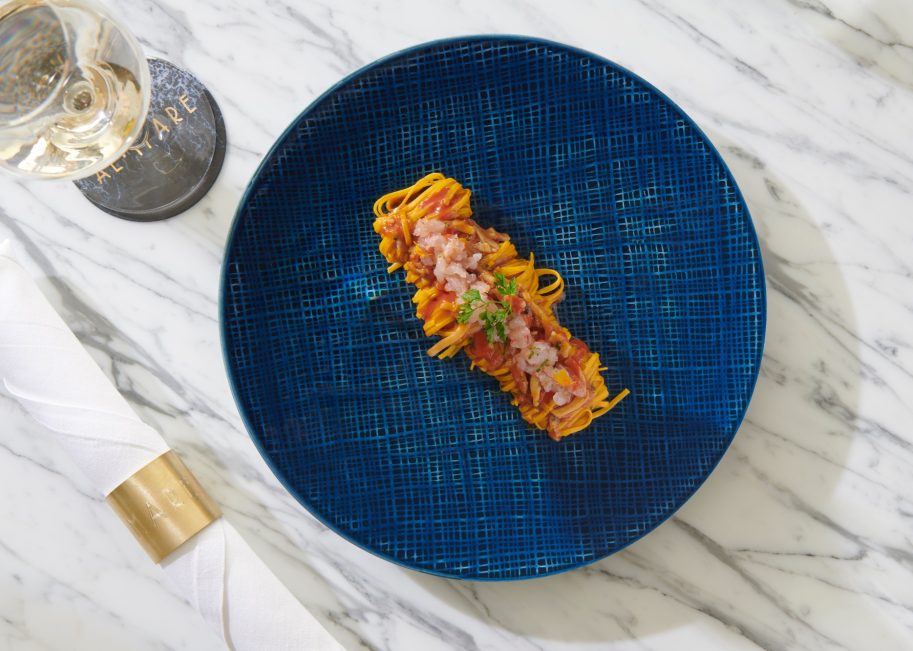 It depends on how much time I have, however, if it’s in the company of friends, I think that a great barbecue is the simplest way to satisfy all palates and to interact with everyone whilst I’m cooking. My barbecue normally consists of vegetables, seafood, and meat… with a touch of Japanese influence. When cooking for my family and children, I normally opt for Italian food. When I cook any dish, I try to choose an element that has history attached to it. I like a dish with a story so I can tell the origin of it, describe it and to make sure my children will understand how important the taste of memory is. Based on the taste of memory and understanding the tradition of a dish, will create a wealth of knowledge for them so that one day they can use it to create their own dishes.

If you could award a Michelin star right now to a UK Chef, who would it be to and why?

For the first Michelin star, I would award it to Chef Shane Marshal from Hatched in Clapham (he deserves the recognition for the fact that he is running his own business and using seasonal ingredients) or to Chef Ben Marks (who I don’t personally know) where I tried his food in Perilla a couple of months ago. Simple cooking done with the respect of ingredients, attention to detail and seasonality of ingredients.

I would give a second star to Chef John Williams at The Ritz Hotel, for the simple reason that The Ritz Hotel is an institution since the day they opened the door, and the quality of food has improved and continues to evolve year after year. A dream for any Chef who wants to learn the great classics of British cuisine while keeping up with innovation. 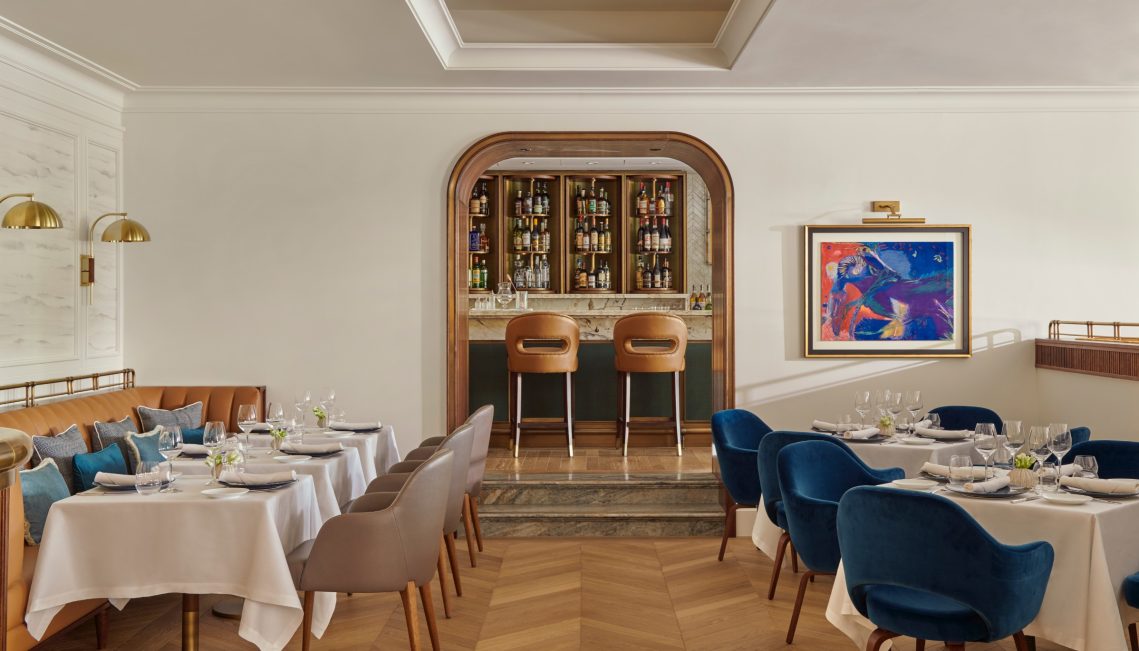 What is next for you at Al Mare?

Ultimately, my goal would be to achieve a Michelin Star. That is the culmination of years of hard work, study, and dedication to this job. I believe that would be the best present for my 40th birthday!

All imagery courtesy of Jumeirah Group.